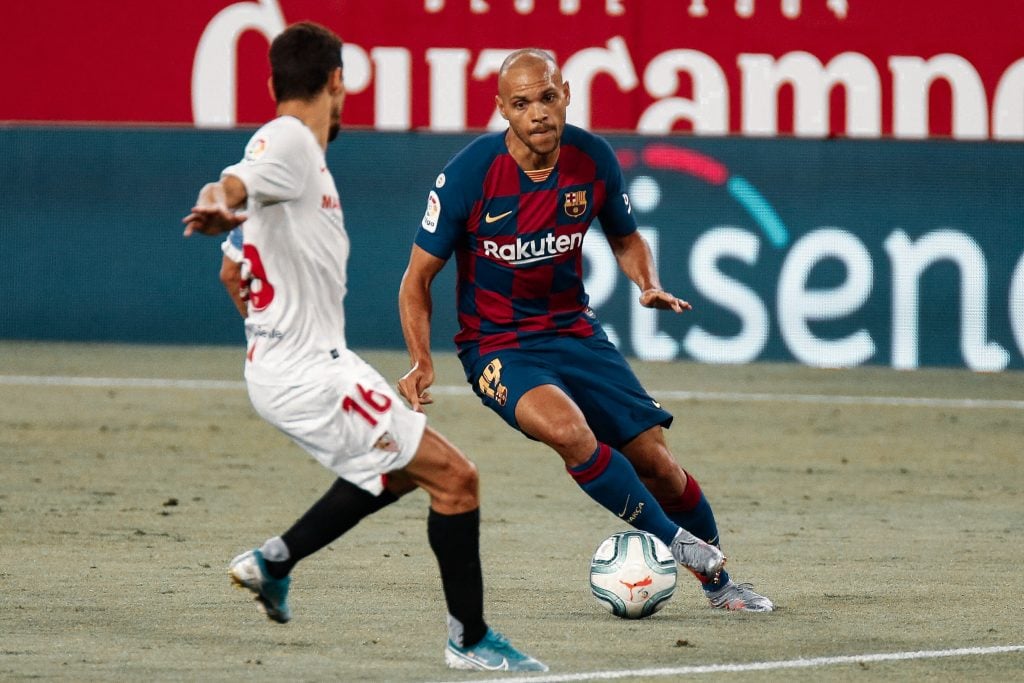 After one point that feels like less, our editors comment on their takes on the 0–0 draw between Sevilla and Barcelona at the Sánchez Pizjuán.

Much to debate after the first big test for Barcelona after the coronavirus break. A test which, possibly, they did fail. A goalless draw that feels like a loss, considering Real Madrid now have the advantage in the league title race. What do our editors have to say on such disappointing result?

A tale of two halves

Barcelona desperately needed a win in order to cement themselves as table toppers, but, despite dominating the first half, the Catalans completely lost the plot in the second, showcasing a very similar outcome in the most recent Clásico, minus the loss. Nonetheless, this was a loss in many ways as the blaugranas have provided Real Madrid with an opportunity to go first in the league table.

Quique Setién’s side fell prey to its own lack of intensity and desire, which was made worse by the coach’s inability to read the situation effectively. While substituting the likes of Riqui Puig and Ansu Fati earlier on in the game might have helped the club be more direct and lethal in attack, Quique seemed to have settled with an unsatisfactory and unconvincing draw.

The Spanish left-back was a constant threat for Sevilla on the left flank, making several darting runs forward and solidifying Barcelona’s defence. Although Alba’s level, before football’s hiatus, had been a subject of great criticism, he has looked in sublime form in the two matches he has started so far. In addition to maintaining an imposing figure in attack against Julen Lopetegui’s men, he also proved to be an asset at the back. If Barcelona intend to compete for the title, they would require such performances in the remainder of the campaign.

Often in football, you see rapid changes in circumstances. Within split seconds. And that is exactly what happened last night for Barcelona. Yesterday’s was the first big test for the azulgranas since La Liga’s resumption. And, unfortunately, they didn’t have answers to the questions. After a supremely promising first half with energetic pressing and proactivity, the second half took a turn for the worse.

Quique Setién’s bizarre decisions with substitutions and an overall lack of interest from everyone all over the pitch resulted in a 0–0 draw. A result which could have been even worse had Sevilla taken their chances. Setién’s contradictory decision about Luis Suárez’s fitness, playing him for the whole 90 minutes in spite of saying he wouldn’t, just adds to the strangeness of the second half. A half where the players were totally static and seemed lost. As a consequence, the league can no longer be won on Barça’s own terms. It is now a matter of luck and hoping for massive improvement from here on out.

The entire backline was a rare positive from yesterday’s overall performance. Marc-André ter Stegen made vital saves and helped generate numerical superiorities at the back, Gerard Piqué and Clément Lenglet were solid bar a few nervy moments, and Jordi Alba was good too, making a crucial potentially goal saving interception as well.

However, it was Nélson Semedo who stood out the most. The Portuguese right-back enjoyed a great day out at the Ramón Sánchez Pizjuán. He was fantastic when it came to ball retention and defended along the flank very well, making some great tackles. His recovery pace was on display as well as his ability to play incisive one-twos. He also intelligently created spaces with his runs and clever touches the first half. A silver lining in the draw at Sevilla, hopefully Semedo has a lot more to show in the upcoming games.

In a game of two halves, Barcelona slipped up and will probably rue the missed chances. In the first period, Barcelona looked so engaged and as though a goal was incoming before the cooling break. They played with intensity and width and had some chances to score. After the break, Julen Lopetegui’s adjustments worked wonders and Quique Setién didn’t react well enough. It was a half of senseless passing through the middle of the pitch and no real opportunities to score.

This display surely got every culé thinking about what happened at half-time. Why were Barça so dull? Why didn’t Setién change more? Why didn’t Barcelona go for the goal? Now, it has got the Catalans praying for a Real Madrid slip-up at Anoeta on Sunday. A tough result to take, especially given the great first half the culés had.

One positive from Barça’s game was their defence. Nélson Semedo had an excellent game on the right and covered a fantastic amount of ground. Also, his returns in defensive areas were crucial for the clean sheet. However, Gerard Piqué has to be the player of the match. The former Manchester United defender was imperial last night.

In the first half, Gerard completed all his passes and defended like a soldier as the Sevilla attackers couldn’t get past him. After the break, he took it upper-echelon to stop a revitalised Sevilla side that was more attacking and dangerous overall. His Mascherano-esque tackle in the box was the highlight of Barça’s game and stopped a crucial chance for the Sevillans. A vintage display for one of the greatest defenders in the world.

From hope to disappointment

During the first 45 minutes, Barcelona were everything – or almost everything – fans had been asking for for months. The pressing was highly effective, the progression into the opposing half was coordinated and fluid, and, regardless of the initial team selection, everyone seemed to rise up to the occasion.

Nonetheless, after the thirty-minute mark, and after half-time, the clash became much more even. Partly thanks to Julen Lopetegui’s tactical adjustments, such as introducing Éver Banega, and partly thanks to the worsening and poor decisions from Barça in the second half. As they failed to generate chances – this includes the first period too –, Barcelona once again disappointed at one of Spain’s most respected stadiums this season.

While his introduction in the starting line-up raised a few eyebrows – to say it softly –, Iván Rakitić was a truly vital piece in all phases for the Catalans. Effective on and off the ball, he circulated the ball swiftly and was key at stopping Sevilla’s counters. Maybe, like with Luis Suárez, Setién extended his presence on the field for too long, as his and everyone’s intensity dropped in the second half. But still, if he performs at such level consistently, the Croatian being utilised often should be more deserved than surprising.