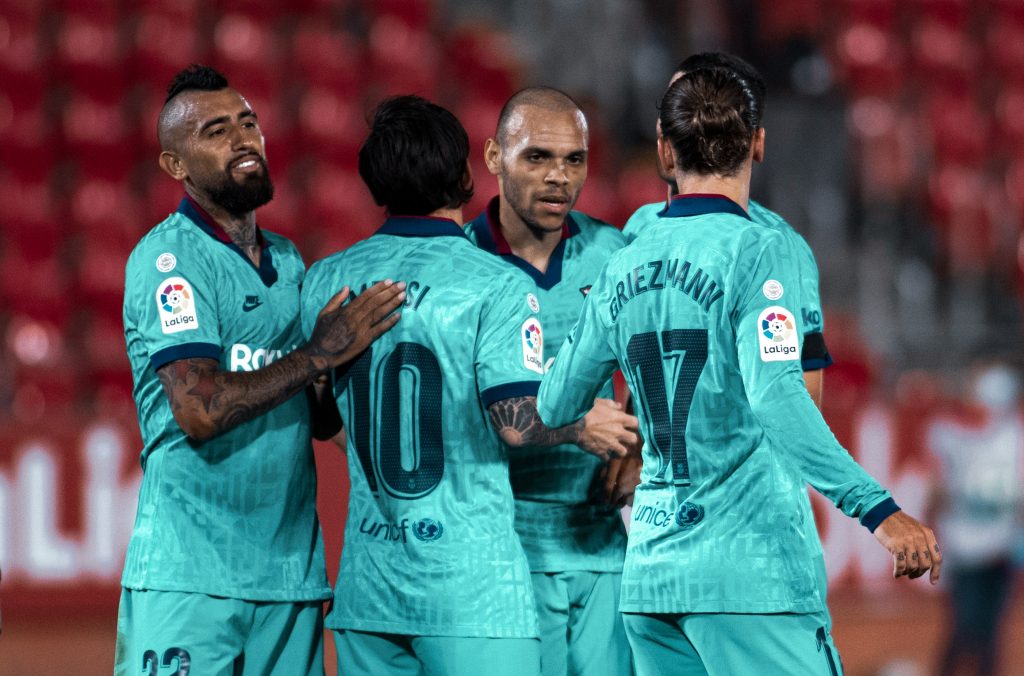 With a refreshing victory after a long break, our editors share their takes and standout performers on the encouraging Mallorca 0–4 Barcelona for the culés.

98 days later, Barcelona returned to action. While more could have gone wrong than right, Barça impressed with a promising 0–4 win away at Mallorca. With much to comment on it, we ask our editors to voice their opinions and share their most impressive player of the game on Saturday’s excellent re-start for the leaders.

Just what the doctor ordered

The wait was worth it for Barça fans as they got a routine win in Mallorca. It was perhaps Quique Setién’s squad most complete game and their first half was everything culés had been asking for during Ernesto Valverde’s era. The shape of the team, especially defensively, was perfect as the players finally seemed to understand Setién’s tactics. In defence, it was a 4–1–4–1 with Messi not pressing, and the Catalans soaked up the pressure correctly. The Mallorca players had to innovate to get in behind the rock that was Barcelona’s defence.

Also, the fact that it was more about the unit than an individual was refreshing. Only Antoine Griezmann had a sub-par display last night, and every other azulgrana raised its level, and that’s mostly thanks to the break. The press the Barça eleven applied on the Mallorca men suffocated them, and the full-backs’ positioning was out of this world. In the first half, they were playing like wingers but were moved back in the second half with Setién being more conservative. Still, every player played their part in winning this battle, and it was beautiful seeing Barcelona as dominant as today.

Lionel Messi scored once and assisted twice for his return, but he wasn’t the one that caught my eye tonight. Of course, the Argentine is the best, but his display was typical for his standards. On the other hand, Ronald Araújo lived up to the hype in his first league start with Barcelona. The Uruguayan centre-back was rock solid in defence and justified Setién’s decision to bench Samuel Umtiti. With the ball at his feet, Araújo was confident and had a 94% pass completion, only 2% short of Jordi Alba’s 96%.

Moreover, he looked at ease playing next to Gerard Piqué and even outshined the La Masía graduate on many occasions. He blocked many shots when Barça suffered to get the ball from Take Kubo’s feet. He nearly got his first goal with Barça too, but the post had other ideas. Overall, a high-quality performance from a promising defender who will have given Quique Setién some reasons to use him more often this season.

For Mallorca, it was former La Masía prospect and current Real Madrid loanee Take Kubo who impressed the most | Photo by David Ramos via Getty Images

On the right track

It was far from a perfect performance, but the blaugranas came into this match with an excellent mentality and reaped the benefits. Attacking right from the start, the early goal definitely helped boost the confidence even more. From there, it was domination for Barça. Not perfection, but Mallorca couldn’t cause any real danger, while the attack led by Lionel Messi could have scored even more. It’s a great result away from home, especially given the circumstances, and hopefully Barcelona can build on it as the title race progresses.

The basic choice, but he was undeniably brilliant. Similar to the team as a whole, we’ve seen him perform better. However, there was still no player who influenced the match like him. He was creating left, right and centre, with six key passes and four big chances created, per SofaScore. He got his end product as well, with two assists – the one to Alba being particularly brilliant –, and a late goal to cap it all off. As much as things have changed throughout the past few months, Messi is still the same.

Precision, clarity and fluidity in Barcelona’s gameplay helped them stand a cut above Mallorca during the entirety of the game as following those three ideals led them to a triumphant victory over a melancholic Mallorca side. Despite being away from action, for what seemed to be an eternity, Quique Setién’s men were determined to acquire a grand victory, which is exactly what they did, thumping four goals and playing its football in harmonious fashion.

A variety of beautifully created goals, each innovative in their own way and Martin Braithwaite’s debut goal for Barça, along with a Messi masterclass made this a laudable performance for the men in baby blue.

❛ We had many doubts. We weren’t sure what was going to happen. Conquering matches in these circumstances is very important ❜

Although many Barça players rose up to the occasion, lending a tremendous hand to the team, there was only one man who seemed to have procured this title, and that was none other than Lionel Messi. The Argentine looked sharper than ever and was a constant menace for Moreno’s men. A goal and two assists to mark his return earns him the man of the match designation as he helped his Barça side cruise to an exultant victory. With his beard trimmed, hair coming down and typical knack for scoring goals, it appeared as if Leo had gone back in time and brought a younger version of himself. If the azulgranas desire to continue winning games, they will need their captain to continue performing in the same faultless fashion.

After a lot of time, a lot of waiting, a lot of anticipation and reminiscing from the fans, Barcelona were finally on the pitch again and was the waiting worth it. Setién’s side looked better winning 4–0 than anyone could have expected after a long time since their last competitive match. The team’s excellent tactical approach along with the individual brilliance of a few players was a joy to watch. Mallorca were not an impressive side as a whole while ex-La Masía player Take Kubo was delightful to the eye. With an excellent job by the Catalans, they maintain their lead at the top whereas Mallorca find themselves in a difficult situations in the battle to not get relegated.

With undoubtedly impressive performances from various players such as Jordi Alba, Sergi Roberto, Sergio Busquets, Frenkie de Jong and Arturo Vidal, in any normal team the battle for the man of the match would have been very difficult. However, this team has the Argentine genius Lionel Messi. With one goal, two assists, six key passes and four big chances created, the little genius was undoubtedly the star. With more goals and assists than any other player in La Liga this season, Messi has come out of the long hiatus as strong as ever.

As if the break had never happened, or as if the break had really happened. Barcelona took advantage of all the benefits the break could give them, in the form of some much-needed rest, while they did not embrace the negatives that this could have provoked. Ultra competitive from minute 1 to 90+3, when Lionel Messi put the cherry on top of the cake to a brilliant individual and collective performance, the La Liga leaders had no mercy with a Mallorca side that is certainly suffering from the circumstances. With Quique Setién implementing fresher ideas, Barcelona showed a lot of promise at Son Moix.

❛ Nobody can beat me ❜

Lionel Messi will deservedly be the Man of the Match based on individual level, but when it comes to one’s real expectations, it is safe to say that Martin Braithwaite has been greatly exceeding them since signing for the Spanish giants in February. While mocked at first for coming from Leganés, in this opening game he already reaped the rewards of training three times harder than the rest. “Barça’s plan is only a third part of my training. There’s no one who trains and works as I do”, he said during the break. With his first goal as a culé, Braithwaite is really pushing for a spot in the starting XI.