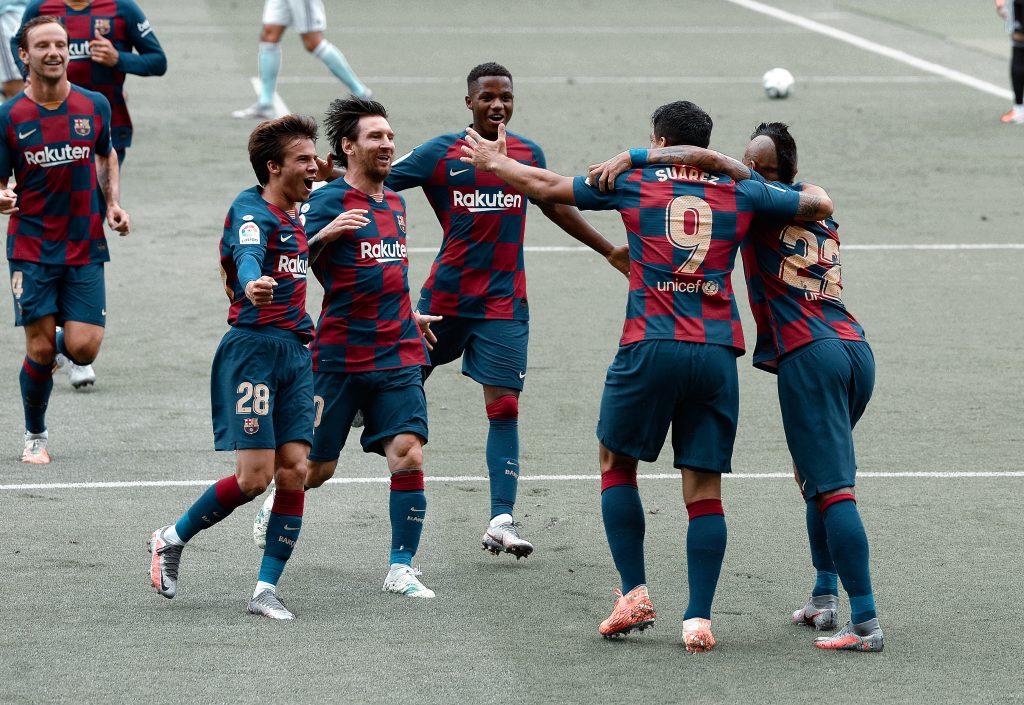 With another disappointing yet possibly decisive draw, our editors share their takes on the Celta de Vigo 2–2 Barcelona.

Barça took the lead twice, but Celta equalised twice. On Saturday at Balaídos, there were goals, drama and even some errors – unfortunately for Barça, though. As the celestes continue with their positive form, the final 2–2 draw could make the blaugranas regret such dropped points if the La Liga trophy is to end in Real Madrid’s hands. What do our editors have to say on clash and tie?

Mistakes cost Barça the game, and possibly the title

It was a game decided by mistakes for Barcelona in their 2–2 draw with Celta de Vigo. Even though this draw places the title firmly into Real Madrid’s hands, there were a few positives to take from the game. Riqui Puig was brilliant in midfield, injecting that spark of youth the team had dearly missed. Iván Rakitić too ran the show well, but it was his slip up which led to the first goal. Luis Suárez too was clinical, despite being less involved in the game, to get the goals.

Yet there were quite a lot of mistakes made by the blaugranas which proved to be costly. Marc-André ter Stegen was unusually nervy on the ball and Samuel Umtiti was poor, being caught napping far too often. Even Gerard Piqué, despite being imperial throughout the game, made a rash challenge that led to the equalising free-kick.

“We controlled the game, but we couldn’t score more goals. Celta’s second goal hurt us a lot”

Celta, on the other hand, got better with the game. They were sloppy in the final third in the first 45 minutes, but after the break, they looked sharp. Rafinha Alcântara was confident and imposing whilst Denis Suárez showed immaculate technique and passing. The celestes showed incredible character to come back from behind twice and nearly won the game in extra time. It was a well-deserved draw for Celta de Vigo and the Balaídos curse continues on.

He never lets his club down does he? Iago grew into the game brilliantly. Not only was he a threat up front, he was also creating the chances. He sent a magnificent through ball to Okay Yokuşlu that led to the first goal and brought Celta back into the game. He was incredible in the final 15 minutes, scoring a sensational free-kick around the wall. He created another chance with an audacious pass to Nolito. Not just that, he played a defence splitting through ball in the final minutes that almost won Celta the game.

Celta’s captain played wonderfully in the second half and led the team by example. Stepping up in the final few minutes, the célticos‘ Guardian Angel proved to be the difference once again as they picked up a crucial point in their fight to avoid falling into the drop zone.

A game of mishaps

Another frustrating result for the Catalans. What was, tactically, perhaps one of the most promising performances since the restart, was marred by costly individual errors. Two cheap mistakes from Barça allowed Celta de Vigo to equalise twice and snatch a point at the death. The reigining champs also weren’t clinical enough in the final third. And thus, Barcelona’s winless run at Balaídos worryingly extends itself to five years.

“I’m happy that I scored, but I’m frustrated about the fact that we didn’t win”

While there were positive sensations from Ansu Fati and Riqui Puig starting and Luis Suárez ending his scoring drought in style, it wasn’t enough. After a five-match streak of clean sheets and good defending, poor positioning and awareness dealt two massive blows to Barça’s title defence once again. The initiative to win La Liga now fully lies in Real Madrid’s hands.

Celta put in a very solid showing and created a ton of chances. In fact it wouldn’t have been surprising if they had come away with all three points. And as is the case so often, their own Captain Fantastic Iago Aspas was at the heart of proceedings. He was a constant thorn in Barça’s side. He set up a wonderful breaking pass to Okay Yokuşlu, who in turn set up the opener for Fyodor Smolov. And in the 88th minute, he scored a superb free-kick to secure the draw for Celta. A dagger to Barça hearts but another positive result for the celestes, continuing their recent run of fine form.

The rhythm we have to see

The first half against Celta de Vigo was perfect and its rhythm is the one we have to see more often. Against a fabulous celeste side, Quique Setién’s men were able to defend solidly, find spaces in attack and do everything with intensity. In addition, the introductions of Riqui Puig and Ansu Fati in the XI were ideal to play in the way the team did, especially in the first 45 minutes.

Luis Suárez started again, but this time he scored his first goals since his injury in January | Photo by Imago

Despite the painful draw, the Catalans have nothing left but to continue fighting for a league that has become increasingly complicated. For this, it is necessary to see that successful level of rhythm in the following matches and, obviously, wait for Real Madrid to lose points.

With Sergio Busquets’ suspension, Iván Rakitić took up with the difficult task of acting as the pivot of Barcelona. A position that requires a high level of knowledge and awareness in comparison the other areas of the field. In spite of his error in the pass that caused Celta’s first goal, Rakitić was a fundamental part of the ball circulation, pressing hard on defence and starting plays from deep. There hasn’t been any good news lately, but Rakitić’s level and knowing that he has returned to his best form should be a source of joy for fans.

Barcelona came, Barcelona saw, but Barcelona did not conquer. The culés were in control in the first half, playing a patient passing game to avoid Celta’s rapid attacks.
With Luis Suárez’s goal and Lionel Messi’s brilliance, everything looked bright for the dominant blaugrana squad. But they then began to suffer a bit. Without Busquets, and even though Rakitić did a fine job, Barça lost some stability in the midfield and got exposed on multiple occasions, with some inexcusable gaps in the defence.

Samuel Umtiti looked lost at sea when Celta scored the equaliser, as Iago Aspas’ incredible pass sliced through the Frenchman. After that, Barça wanted to win and showed their hunger as the second goal was brilliant from all aspects of the game. Nélson Semedo’s pressing led to Messi giving Suárez the ball and the Uruguayan striker firing in an excellent shot.

The Catalans stayed offensive but rested a bit and lost concentration as Aspas’ free-kick was sensational. Even though Barça drew, this is their best performance since the return, and they lacked a bit of luck to clinch that win. The result is heartbreaking, but the performance was positive. However, the culés have to feel as though they have lost the league at Balaídos yesterday.

Iago Aspas is the Galicians’ best player ever, and he showed why last afternoon. The striker pulled strings in what was a toothless attack before the break. His first-half display deserved a goal, and he came close on two occasions, but Ter Stegen was too good. He took his revenge in the second half with his impressive pre-assist to Okay Yokuşlu and his heroic free-kick. That free-kick is the dagger in Barça fans’ hearts. Iago Aspas undoubtedly saved Celta from relegation for the second year in a row, but this time it came at a price, and it was Barça’s title.

Let down in the key moments

Again. Let down in the key moments, again. Another critical encounter for Barcelona, which should consider every match like a final from now on. If against Sevilla they failed to break the deadlock with a disappointing performance, on Saturday at Balaídos Barça shone for long periods of time. But, once more, lapses of concentration and mistakes proved too costly as these two dropped points could be decisive in the title race with Real Madrid. Much to improve, and much to learn too – such as Riqui Puig and Ansu Fati’s contribution, or, on the other hand, Samuel Umtiti‘s fatal display.

Who else? Iago Aspas deserves all the praise. While Denis Suárez’s magnificent defence-splitting passes and Rafinha’s brilliance displayed through the entire season must be appreciated by Celta and football fans, it is Iago who proved again that he is a genius and hero for the Vigo-based side. With touches of magic and intelligence, he keeps pushing his team higher up the table. Whether there’s Aspas-dependence at Celta or not, that should never be a bad thing if such exhibitions continue to be witnessed. Preferably, not against Barça, though.