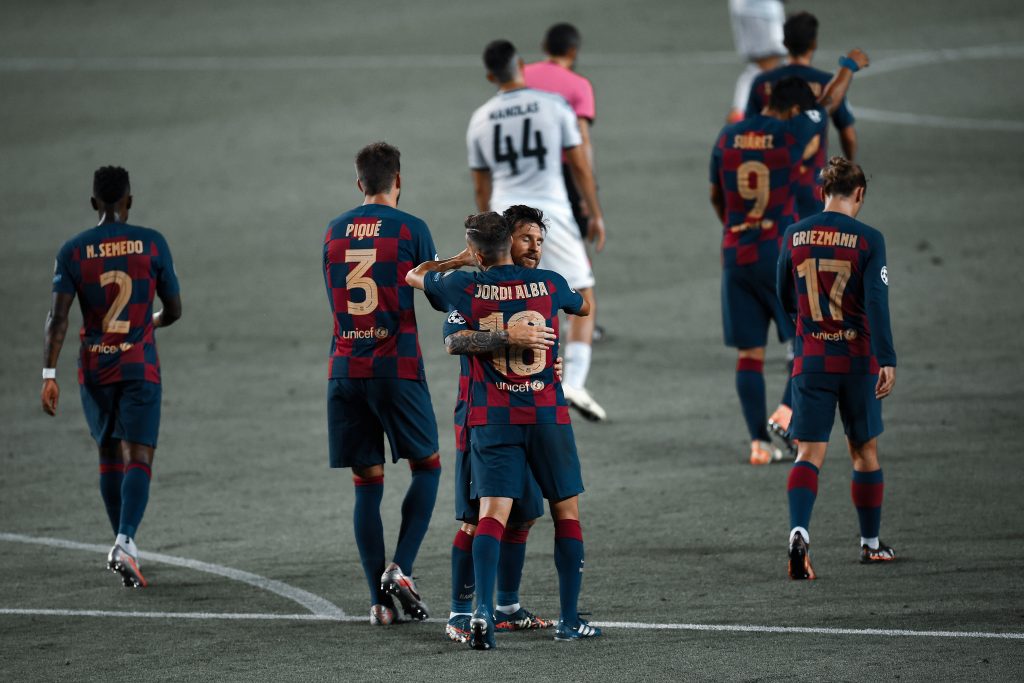 In an inconsistent display from Barcelona, our editors share their takes and standout performer of the 3–1 win over Napoli to progress into the Champions League quarter-finals.

Barcelona were favourites to beat Napoli in the second leg of the Champions League last 16, but, admittedly, there was a bit of nervousness among the culés due to the recent experiences in Europe. Nonetheless, on this occasion Barça left no room for surprises as, after an encouraging first half and duller second, the Catalans beat Napoli by 3–1 at the Camp Nou. In the quarter-finals in Lisbon, Quique Setién’s men will face Bayern Munich. Regarding Saturday’s home win, our editors share their opinions and player of the match in the all-important victory over the Italians.

Out of the frying pan into the fire

Despite what the scoreline suggests, this was a nervy match. There is no surprise there-though. Coming into the second leg of Champions League pre-quarters against the Neapolitans with a score line of 1–1, no one expected an easy ride for FC Barcelona. On the contrary, with their last lap collapse in the La Liga a couple of weeks ago, Barcelona’s prospects were considered to be slim – by critics and fans alike.

The script of the match was not that linear. After an initial flurry of attacks, Napoli was pinned back by the Catalans thanks to a timely goal by Clément Lenglet in the 10th minute. Within another twenty minutes, the blaugranas buried the ball in the Italian side’s net twice, even though only one of them counted. Still, there was a sense that the home side would exhibit a killer instinct that has been missing for a long time. The third goal, resulting from a penalty for a foul on Messi, reinforced this belief.

“There are no favorites in this Champions League. Anything can happen in a one-game tie. I think we have a very good team to win it”

The dying minutes of the first half, however, saw Napoli pull one back from a penalty. This, in my opinion, dictated Barça’s tempo – or the lack thereof – in the second half. All of a sudden, the Italians looked like they could pull another one back. Barcelona seemed to get nervier in the second half that was exactly opposite of the first. One could argue that with many key players being on suspension threats due to yellow cards, and some key ones like Sergio Busquets and Arturo Vidal missing, the locals were trying to be in cruise control. But that’s the thing, they were not controlling anything. Waves of Napoli attacks kept coming and Barça kept conceding dangerous set pieces.

The scoreline may have remained the same, but Barça had to fight it out to get this result; which makes one wonder how they would weather a high flying side like Bayern Munich. But that of course, is a topic for another day.

I know; in a game where Messi’s magic was once again in full display, picking anyone else under this title is almost blasphemous. But for me, there is no denying that Clément Lenglet was the catalyst that not just turned the game around for Barcelona, but helped them dig their heels in and weather the Neapolitan onslaught in the second half.

It was Lenglet’s smart header that opened the score sheet for Barcelona. It is quite fair to say that this goal came against the tide of the game. The Italians were attacking incessantly for the first ten minutes. Lenglet’s goal, however, became the wind in the sail for the Spanish ship and helped them gain confidence.

The second half, as mentioned before, saw Gli Azzurri attacking with a lot of intent. This meant that Lenglet and Gerard Piqué had a lot of hard work to do. While both of them stood strong in fending off the attacks, Lenglet put up some solid stats in helping the team out. With four blocks, three clearances and a tackle, his numbers were massive. He also clocked an impressive pass success percentage of 94.6.

With Barça now gearing up for arguably the most daunting task of the whole season against the Bavarian giants, the young defender’s fine form is indeed a welcome sight.

Barcelona hosted Napoli in a thrilling encounter at the Camp Nou in a game that not all culés had faith in. After all, we had just lost the title, the players are caught up in a feud against the board, and to top it all off, we lost our unbeaten home record.

That said, yesterday was a game of several brilliant individual performances, chaos, controversy and what could have been. Dries Mertens was gifted a lovely chance in the first few minutes of play, but his shot could only meet the upright. Barça took the lead against the run of play through an Iván Rakitić corner that met the head of Clément Lenglet after he fouled Diego Demme inside the box. Thanks to good fortune, it stood.

Soon after, who else but Lionel Messi displayed a moment of madness dribbling past defenders as if they were training cones, before curling the ball into the bottom corner while nearly lying down. Things only Messi does. He then scored another great goal, which was disallowed for a hand that nobody actually saw. Tit for tat, I guess. However, Barcelona did get a penalty immediately after when Messi was horribly brought down by Kalidou Koulibaly through no fault of either player. The penalty was converted by Luis Suárez but the lead was shot down to two when Lorenzo Insigne struck his penalty four minutes later.

“The team played well and deserved the victory. They caused us problems, but we controlled the game in the first half. We had problems after the break, but we reduced them to few chances”

The second half was slower, but just as chaotic. Barcelona took control of the ball in phases but it looked like we forgot to attack. Napoli on the other hand made sure to continue attacking and came close to scoring a few times, but were let down by poor finishing. Not going to lie, when Arkadiusz Milik scored, my heart missed a beat or two. A strategy like this will not work against Bayern. And the late, tardy substitutions definitely won’t.

Another day, another Lenglet masterclass.

The Frenchman opened the scoring for the club early on and then defended like his life depended on it. He made crucial blocks, interceptions, won aerial duels and made Mertens look like a second division striker. We can only hope he recreates this masterclass on the weekend.

An enthralling night of football that had it all. It wasn’t the most fluent of performances, but hey, not all games are fairytales. As expected, it was a crunching encounter where Barcelona had to fight tooth and nail on so many occasions. It is a very rare sight to see the Catalans struggle for possession at their own den, however that is exactly what happened on Saturday night. Napoli pressed hard from the first minute, pinning back the hosts and putting them under pressure.

A dubious opening goal followed by an extraterrestrial second one put the visitors on the back foot. The game was rounded off with two penalties and a goalless second half. The major talking point, however, was the horrific clash between Lionel Messi and Kalidou Koulibaly. Fortunately, reports say that Messi will indeed recover in time for the quarter-final against Bayern Munich.

The rise of Lenglet at Barcelona has been a silent and underrated, yet a rapid one. It is sometimes hard to fathom what a world-class defender the club acquired at such a bargain. Barcelona’s defensive struggles are well documented, especially those in knockout duels. Under all the pressure, the Frenchman once again wore his calm and composed demeanour and had what was one of his best performances in the Blaugrana colours.

He opened the scoring with a towering header, one that could have been disallowed, though. Nevertheless, it was his defensive proficiency that once again stood in the limelight. 3 clearances, 4 blocked shots and an interception: the stats peak for themselves. Undoubtedly, if Barcelona are to put up a dominant display against the German champions, Lenglet will once again have to be beyond his usual best.

Raising more questions than answering them

165 days later, the second leg of FC Barcelona and SSC Napoli returned. Barcelona’s line-up wasn’t that surprising with experience given more weightage than youth. 90 seconds into the game, Napoli forward Dries Mertens hit the post. But minutes later, Clément Lenglet secured an opening goal for the home side, breathing in a sense of confidence in the whole team’s approach. Everything went in favour of Barcelona from then. Be it Lionel Messi’s dancing legs, Frenkie de Jong‘s composure in the absence of Sergio Busquets, and Nélson Semedo showing little glimpses of Dani Alves in him.

“We knew the game wouldn’t be easy. The main thing is that we have qualified. We have to prepare for the next game”

The first half had everything, until Napoli received a soft penalty. Whereas, second half of the game raised several questions unanswered for the culés with coach Quique Setién forgetting there is a rule allowing you to do substitutions. A fresh pair of legs given the new five-substitution rule has been highly disregarded by him. Leaving out the in-form La Masía players Riqui Puig and Ansu Fati is also a topic to debate upon. Approaching the Bayern Munich clash, this way definitely won’t work out.

Lionel Messi’s indomitable magic had everyone’s eyes on him during the whole game. He scored a stunning goalazo in the first half, dribbling past three Napoli players to score at the far post despite falling over twice. The Barcelona captain also had a fair second goal ruled out by VAR, denying De Jong of a world-class assist. Later, he was awarded a penalty from an unsighted tackle from Kalidou Koulibaly.

We saw a vintage Messi in the first half, which looked struggling due to a knock during the whole second half. It is safe to say for now that the Argentinian bought a ticket to Lisbon for Barcelona.