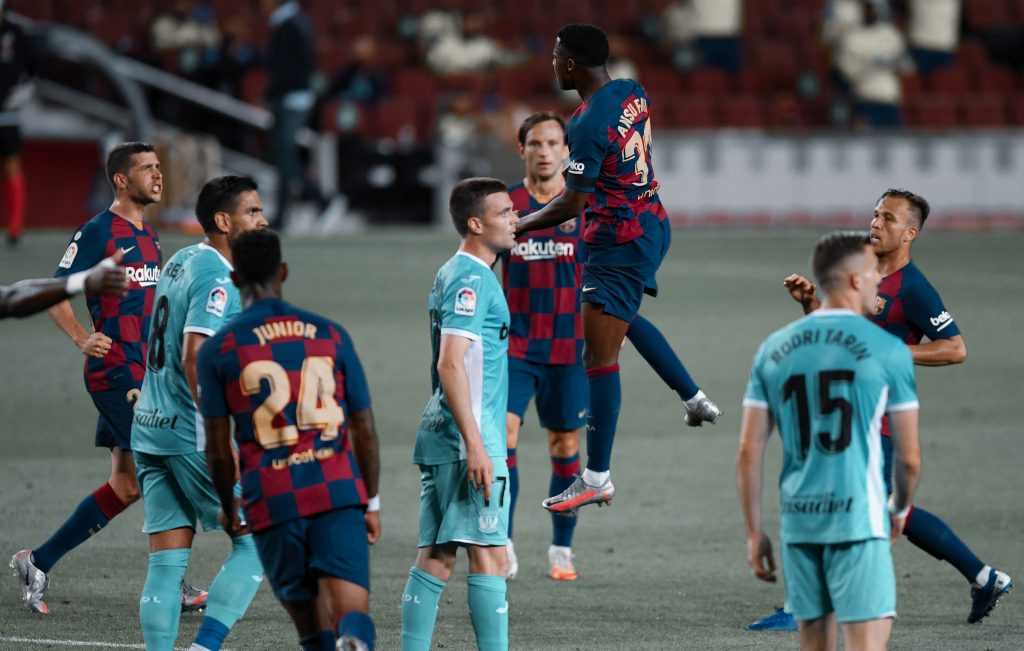 Football was back at the Camp Nou, and victories continued for Barça. Our editors share their takes and most impressive performers on the Barcelona 2–0 Leganés for the locals.

After an impressive 0–4 victory over Mallorca, it was time for Barcelona to return home. At the Camp Nou, a struggling Leganés put the azulgranas into trouble more than once, but Quique Setién’s men ended up on top with goals from Ansu Fati and Lionel Messi. This is what our editors have to say on Barça’s latest triumph:

A scrappy win, but vital nonetheless

The much anticipated return to the Camp Nou after an excruciating 101 days went more or less as planned for the champions. The game was a rather cagey affair, particularly in the opening moments. Leganés’ deep block made it seem like the game had a frustrating draw or loss written all over it. Especially after the two very dangerous chances they created within the first 15 minutes.

But by the end of a dicey first half, Ansu Fati’s wonderful finish ensured the game followed the script. Lionel Messi also played his part to seal the win in typically splendid fashion. A far from perfect performance, but in these circumstances, imperfect wins like this are going to be necessary too.

Clément Lenglet returned to the starting XI after serving his one match suspension. And he did exactly what Barça fans have come to appreciate him for, in his time at the club so far. A calm, assured presence at the back. If it weren’t for his immense goalline block in the 12th minute, the game could’ve followed a very different path. While Messi will grab headlines once again with another clinic, amid noteworthy performances from Junior Firpo, Ansu Fati, Marc-André ter Stegen and even Riqui Puig, Lenglet’s display is very reassuring with a crucial game against Sevilla coming up next.

After 101 days, football returned to Europe’s biggest stadium, the Camp Nou. Both, Barcelona and Leganés needed the wins for different reasons. One team was fighting to retain their league title and another to move away from the relegation spots. With the lack of fans, Barcelona were sluggish to start, and almost conceded a goal if it wasn’t for the goal-line clearance from Clément Lenglet. But slowly, with their pressing and the combination between Junior Firpo and Ansu Fati, Barcelona found out an absolutely top draw goal out of nothing.

Later came Lionel Messi’s magical incredible run from the halfway line, nutmegging with an auto-pass, and the somehow holding off two Leganés defenders before a neat one-two with Luis Suárez, earning the team a penalty. Iván Rakitić with his positioning tried to make life easier for the team constantly. And, finally, a little vibrant cameo by La Masía graduate Riqui Puig almost gave culés some more moments of satisfaction too.

❛ It is a pity that he did not score, because he has been close to doing it. I greatly appreciate what he has done and the presence he has had ❜

For Barcelona going forward, definitely more determination would be required against Sevilla. The team selection will be a key for Quique Setién and Barça cannot afford to make the wrong choices.

Yesterday’s game gave us a glimpse of the Barcelona all-rounder and ex-Sevilla captain who took his country to an unlikely run of reaching the final in the 2018 Russia World Cup. Iván Rakitić looked to be in a constant quest of connecting the defence with the front line. It would be understandable if his performance went unnoticed in a match where a 17-year-old academy product scored and Lionel Messi gave another masterclass of his own. Still, where it is due, appreciation should be given.

❛ I had a very strange first half of the season, it was very uncomfortable and surprising for me. But I hope I can finish this last year of my contract ❜

A game of minutes for those who needed it the most

Barça was back to business, but now it was time to welcome back the Camp Nou. It was not the exhibition that many predicted after the 0–4 win against Mallorca, though. A flat game without intensity, and with many difficulties to find spaces in the first half. However, Ansu Fati’s goal started the constant improvement of the Catalans during the match. There was also excellent news such as Junior Firpo’s good display, the defensive solidity and the long-awaited chance for Riqui Puig, who fully seized the last 20 minutes. One more victory, but there is still a lot of work to do.

Adding up starters and substitutes, Quique Setién has used a total of 20 players during the past two games | Photo by Alex Caparrós via Getty Images

Clément Lenglet couldn’t play against Mallorca due to suspension, but last night he was back. When he doesn’t play, you can see that something is missing in the Catalans’ defence. But against Lega, Lenglet delivered 90 minutes of pure solidity, concentration and maturity. That cold blood from the Frenchman prevented Leganés from opening the scoring early on. Moreover, throughout the game, he continued to do a great job with his anticipation and by being always very well positioned on the pitch. Not only that, but he also collaborated in attack and build-ups. He always linked up effectively with the midfield and intended to find Antoine Griezmann and Ansu Fati more than once.

Getting the job done

Not glamorous, not thrilling, not epic. But effective. And, at a time when everyone is returning from a three-month break, there’s a game every three days, no fans give extra drive to the players, and there’s a hot title race in place, the important thing is to be effective. Barça, once again, were just that. Two goals, a clean sheet, and a few rotations that the squad and heavyweights will surely appreciate before visiting Sevilla. Maybe the type of performance against Leganés was what people expected to see against Mallorca in the opening post-pandemic game, with much fine-tuning needed. But still, Barcelona continue with an immaculate record after the break.

The future is now. Once more, Ansu Fati proved that he is a special prospect, but, apart from that, that he’s ready to contribute in the first team already. With dribbling, width, intelligence and offensive threat, but also with goals. With little time to shoot, Ansu managed to open the scoring in the 42nd minute with a nice strike into the far bottom corner. Six goals this season for the 17-year-old, who never fails to impress as his talent continues to be differential.