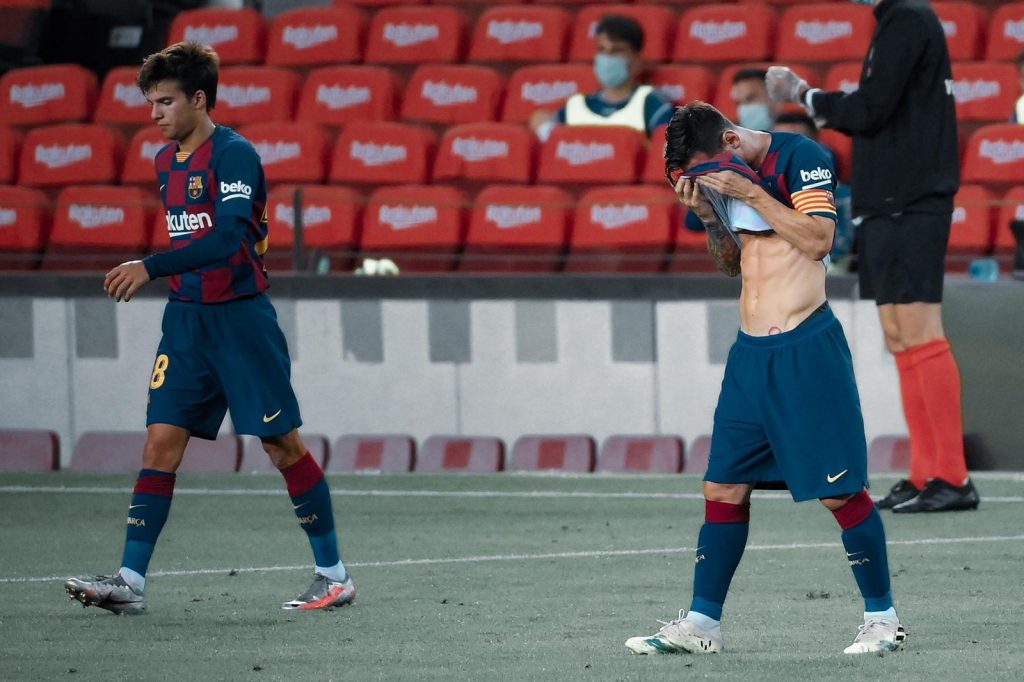 Following an unimpressive 1-2 home loss against Osasuna, our editors share their takes and standout performances from the Barcelona defeat over Osasuna.

On Thursday, once more, Barça let down their fans. As had almost been the norm this season, the Catalans disappointed when it really mattered. With a 1–2 loss against Osasuna in the final game at the Camp Nou of the league campaign, and Real Madrid’s 2–1 win over Villarreal, Los Blancos were crowned league champions. The poor feelings and outcome left all culés hopeless despite the season not being over yet. Meanwhile, after the defeat against Osasuna, our editors express their opinions and standout performers from such disheartening duel.

Despair, hope, and heartbreak were at the center of attention tonight, as Real Madrid won the title for the first time in two years. This game was a tough pill to swallow as Barça dominated possession. Still, Osasuna’s five-at-the-back formation, Setién’s worst nightmare, was too structured for Barça to break it down and the Basque side stung the Culés twice to destroy Barça’s unbeaten home record at the death. First, after 15 minutes of complete Barça domination, a lucky breakthrough from Osasuna resulted in a goal and ex-Barça B player José Arnaíz stun Ter Stegen early to give his side the lead. After that, Osasuna sat back and shut up the shop to give Barcelona no breathing room. It was horrible to see a side so negative, but so be it, Osasuna play like this, Barça must adapt and not whine. Some free-kick and corner attempts by Leo Messi and the first half ended in despair, as Real Madrid found an opener in their game fifteen minutes earlier.

After the second half, Barça pushed hard, and it was nice to see such a change in energy, even though it all counted for nothing. Three goals from the giants came, but two were marginally offside. Also, Messi’s free-kick was the most beautiful strike since the return for the Blaugrana side. The Culés pushed hard and gambled too much to pull the comeback off. It was laborious at times, but the last minutes were good from the Culés, granted the football was rushed, and Osasuna stung for the second time. This last counter-attack hurts so much, as Osasuna surely did not deserve that result and the Catalans have to look back at this game and play better for the Champions League. In the end, it changed nothing, as Real Madrid won the league. Still, these two stings hurt.

Holding off Barça isn’t this hard nowadays, but restricting them to two shots on target is more than impressive. The five-man defence of Osasuna was magnificent, from Pervis Estupiñan’s explosiveness down the left flank to Aridane Hernandez keeping his team alive by blocking shots from Ansu Fati and Leo Messi like a warrior. It was this kind of night for the eleven warriors on the pitch for Osasuna, who had to cope with ten men for the last ten minutes and played magnificently as a unit. This game doesn’t have one standout performer, but five, especially as Barça weren’t clinical enough and no one kept their head above water other than Messi, as per. Raul Navas’ repeated blocks were crucial in saving the newly-promoted side, and the Real Sociedad loanee can be proud of his performance. All in all, Osasuna essentially won thanks to their defence, and they could be proud of their performance tonight, as they have shown they’re a Primera side.

A Game Reminiscent of the Season

As usual, Lionel Messi is spot on, albeit this time with his words rather than his feet. This game is reminiscent of the whole season that Barca had; wasted opportunities to go ahead, making silly mistakes, frustration. Don’t get me wrong, they did not play that bad. They had a humungous possession percent of 75%. Sure, that on its own does not mean anything. But they also fired 17 shots in search of a goal and had won ten corners. They even had two goals chalked off for off-side. The lone goal came from a Messi free-kick. All those corner kicks went bust. ‘We had ten corners. If we had scored one, the result would have been different,’ lamented the manager. Which begs the question, does Barca really practice their corners and set pieces at all? Or is it just Messi who keeps working on his free-kicks? I am not sure there are many top sides in world football that would come up empty after ten corner kicks. Someone needs to do something about this.

?️ — Messi: "I said it before, if we continue like this, we won't win the UCL. Look, we've just lost the league." pic.twitter.com/nfvKw7VPnt

I had predicted that the squad would come up with a fight, clawing for each ball and giving everything. But even though the ball circulation and dynamism was good, there was despair on the faces of the Blaugranes throughout the match. It was evident on the faces of leaders like Gerard pique and even Lionel Messi. More than anything, therefore, I think this team needs to work on its attitude, so as to make sure they do not lose games even before stepping on to the pitch.

One has got to feel bad for the Barca captain at this point. Week after week, match after match, the team just does not turn up to support and fight alongside its captain. Messi was everywhere yesterday, fighting for loose balls, pressing, skipping through the half spaces, trying his signature reference point one-two-ones with anyone available in the final third. Many of those times, the ball just did not come back to him. But mostly no one really worked well enough to attract the defenders away from him – as has been typical of this season. It is to his credit that even in such a frustrating match, he scored a magical free-kick; even as every team comes up with novel techniques to stop him from doing exactly that.

Nothing short of mediocre

A win for Madrid would have sent them to the crown, sure, it was going to happen with the form they had picked up post lockdown. But what happened to Barcelona? A home game against bottom half Osasuna; Messi, Puig, Fati starting. Lenglet, Pique in form. Maybe the team was too demotivated knowing they would – in all probability – lose their defence of the title. However, nothing excuses them for such a shambolic display.

2 shots on target against a side that had conceded more than half a century of goals is inexcusable. The fullbacks were non-existent, Rakitic was absent from the only role he plays well in. As a Barca fan, it seems quite difficult to grasp my head around the game yesterday. Sacking Setien is not an option, what we need is a change of mentality. Desperately.

Till how long is this man going to drag us over the mud? He’s 33, obviously on the last juncture of his career, and absolutely done with the board and management. Lionel Messi took our only shots on goal yesterday, one of which was converted through a sublime freekick. However, he summed up the situation at the club and the game yesterday better than any fan could have. It’s time for change.