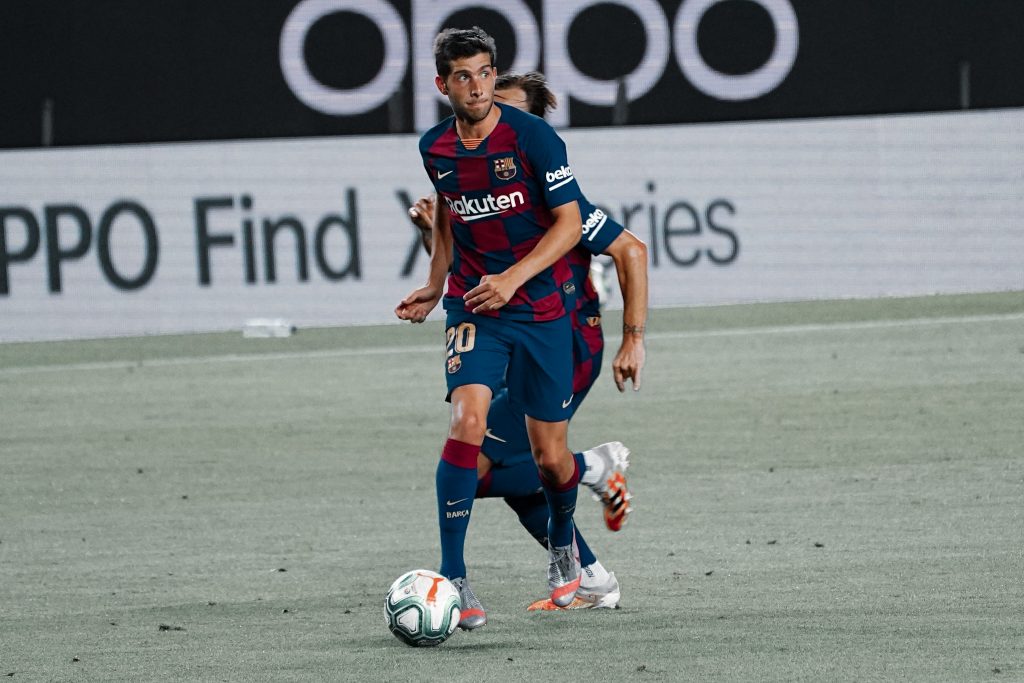 In an uninspiring victory in the derby at the Camp Nou, our editors share their takes and player of the match on the 1–0 win from Barcelona over Espanyol.

The 1–4 win over Villarreal on Sunday brought optimism to the Barcelona fanbase, who were eager to relegate their local enemies RCD Espanyol on Wednesday. Nevertheless, the clash by no means looked like an encounter between the second and the twentieth-placed team, as Espanyol ended up causing several problems to Barça. Eventually, though, Luis Suárez scored the solitary goal of the game, handing the three points to the blaugranas and officially sending Espanyol to the Second Division. After such match, our editors express their opinions and standout performers from such tight duel.

It was ten minutes of madness, which included one red card for each side and a Luis Suárez goal after an MSG attacking trio combination (sort of) that ultimately decided the match. Barça, in contrast to their performance at Villareal, were woeful from start to finish. The team lacked the hunger to win. Quique Setién seemed to have understood the same in the first half and decided to bring on Ansu Fati, who got sent off after playing just three minutes. With the red card to Pol Lozano, however, the game somewhat opened up and Barça got a goal amidst the chaos.

“We didn’t play the way we did against Villarreal. We tried to find solutions to break up Espanyol’s defence, but they defended well and they closed spaces”

All in all, it was a boring match. Espanyol played really well and made Barcelona work hard. They fought till the end and gave it their all. Despite Antoine Griezmann being more involved and Lionel Messi too trying hard, the team remained lacklustre and uninspiring. They failed to break through a defensive block of five. Setién needs to learn to adapt to various teams and their style of play if he wants to win silverware. Not performing well against the 20th team in the league in a Barcelona Derby just will not do.

A case could be made for either of Espanyol’s Raúl de Tomás or Barcelona’s Gerard Piqué for being Man of the Match, but it is Marc-André ter Stegen who pips both of them by a narrow margin. Barcelona’s number one once again showed why he is one of the best keepers in the world. His crucial saves kept his side in the game. His 10th minute save against Adrián Embarba stopped a fantastic Espanyol counter-attack, while he saved Clément Lenglet the humiliation of putting the ball into his own net in the 44th minute.

Ter Stegen never put a foot out of line, and his positioning and passing were inch-perfect. His display was well-rounded and just goes to show how important he is to the club.

A night of mixed emotions

It finally happened. Espanyol have been officially relegated after another loss in the backyard of their sworn enemies. A bitter pill to swallow indeed. The derby loved true to its hype, as it never looked like a clash between teams on opposite spectrums of the table. Espanyol made Barcelona work hard for the three points. They often defended with eight men, making it impossible for the blaugranas to penetrate the lines.

Gerard Piqué could not get his much-desired goal against Espanyol, but he still delivered a praiseworthy performance | Photo by Lluís Gené / AFP via Getty Images

It was only after a flurry of red cards that spaces began to open up in the Espanyol lines, which helped the MSG combine to score the lone goal of the game. The same Barcelona that threatened to score eight goals against Villarreal failed to register a shot on target in the whole first half. While it’s happy times seeing Espanyol gone, the Derbi Barceloní will be missed.

There were undoubtedly times in the game when Barcelona looked like conceding. Espanyol missed a peach of a chance in the first half after a lobbed pass caught the defense off guard. But it would be harsh to not give credit where it is due. Gerard Piqué’s personal rifts with Espanyol are well known. He rose up to the occasion once again with seven clearances and ten aerial duels won. As always, he ventured forward as he loves to, but he was also defensively solid as a rock. He was surely one of the key players in making sure we maintained a clean sheet.

It was never going to be an easy game when the two sides met, especially when Espanyol were running the risk of being relegated at the hands of their worst rivals. They assembled in blocks of five in an attempt to neutralise Barcelona’s 4–3–1–2, which works best through the centre. After a horrid first half, Ansu Fati was brought out to stretch the play, but we saw how that panned out didn’t we?

“What we have to do is win our next three games. Whatever Madrid do is up to them. If the rival drops points then fantastic, we have to think about being there if they do”

Barcelona were lucky to have Luis Suárez in the right place at the right time because until that point, no-one had really made Diego López work. However, it is no news that Espanyol are a really irritating team to play, and three points against them is always a good result, even if the performance was far from satisfactory. Exhausting 90 minutes, but we move.

Sergi Roberto started the game on the left side of a midfield trio after putting in a tremendous display there on the weekend and continued to impress. He was key in connecting the midfield to attack since Iván Rakitić and Sergio Busquets were mostly static.

He created three goalscoring opportunities, one of which was so nearly tucked in by Antoine Griezmann through a solid header but alas. The reason for such top performances probably stems from the rest he received from his injury, and could be key for Barcelona if the season does not go into further turmoil.

Not much to celebrate

Culés, as shown with the fireworks as minutes went by, certainly were filled with joy in seeing their antagonistic city rivals be relegated to the Second Division. But, before getting any party started, Barcelona should first look at themselves in the mirror and ask: is this something to be proud of? The team is filled with individual, structural and tactical struggles, and, while a bit of celebration hurt nobody, the enthusiasm for yesterday’s game was more provoked by the rivals’ failures than by oneself’s successes.

If there’s one player that does not deserve to be relegated, that certainly is Raúl de Tomás. Having arrived to Espanyol in January, he has proved on a regular basis that he should be competing for the European, rather than the relegation, spots. Against Barça he was ever-present in the frontline, being a constant threat and forcing Gerard Piqué and Clément Lenglet to never put a foot wrong. While his performance was not rewarded by a positive outcome, his display was triumphant.