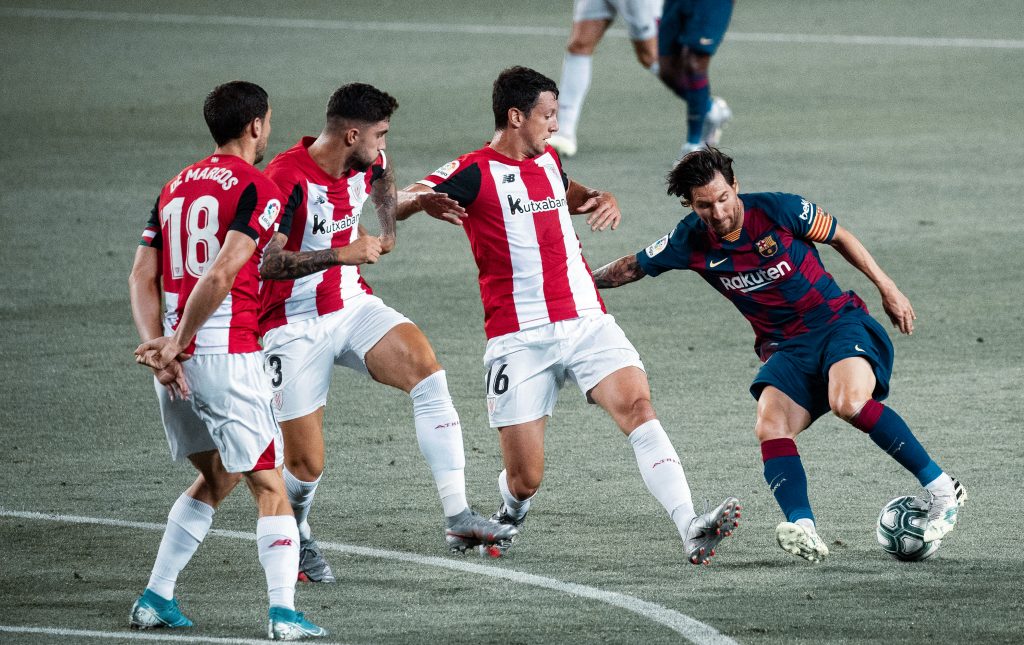 Header Image by by Joan Gosa / Xinhua via Imago

Getting back to winning ways in a tough fixture, our editors share their takes on the 1–0 win from Barça over Athletic Club de Bilbao.

Not glamorous, but needed. After a goalless draw against Sevilla on Friday, which made Barça lose the top spot of the league to Real Madrid, Quique Setién’s men needed to get the victory no matter what. Gaizka Garitano’s Athletic Club would not be an easy opposition, though. In the end, a tight 1–0 victory was achieved by the locals at the Camp Nou thanks to a goal from Iván Rakitić. What do our editors have to say on such win?

Barcelona’s title defence continued with Athletic Club of Bilbao. Without a positive result for the Catalans against the Basques in the last four clashes, many predicted this title race to come to an end against Athletic Club. Failure to win would have further extended Real Madrid’s lead in this absorbing title race. The blaugranas were sluggish to start with, almost conceding in the first few minutes if it wasn’t for Sergio Busquets’ wonderful piece of defending. In the first half, the offensive output was all about Lionel Messi and Luis Suárez looking out for each other, with Antoine Griezmann receiving no service.

Later in the match came three incredible substitutes who completely imposed themselves on the game. Riqui Puig started where he left off from the Sevilla game. The intensity of the play changed instantly. Puig, along with Iván Rakitić in midfield, completely changed the tempo of the game. Ansu Fati also provided width and pace on the flank, which was lacking in the presence of Suárez and Griezmann together upfront.

Rakitić, on the other hand, with consistent performances, bagged his first goal of the season giving a much-needed lead to Barcelona in the title defence. Going ahead, these three players should be considered as starters for the team, rather than substitutes for Setién. They surely need to be rewarded for such displays.

Ricard Puig Martí, or Riqui Puig, is a 20-year-old central midfielder playing for Barça B. However, that such a talent plays for the B team should be an embarrassment to the club. Going forward, hopefully this changes for the best.

Against Athletic Club, Puig played only 39 minutes, which proved to be the best minutes for Barça as well. From the moment he came on, he showed his intention to just grab the opportunity. Being such a young player, and even with that small slight stature that we often hear about, he carried with him such authority. With the second he came off the bench, the tempo of the game changed completely.

“I’m really happy for the minutes and the confidence that Quique Setién is giving me. If we add good results to this, that’s fantastic. I want to win lots of things at this club”

His pass in the build-up to the goal showed his mentality of being progressive. A midfielder has to play the ball through the lines to create offensive chances, which has been lacking in Barça’s midfield these days. Puig showed he can make an impact against difficult teams. First against Sevilla with his small cameo, and now against a solid Athletic Club.

Barcelona continued their abysmal second half in Sevilla last night at the Camp Nou by playing a slow brand of football that wouldn’t work against Gaizka Garitano’s hermetic side. Against the team that concedes the fewer shots in La Liga, playing without any wingers and static midfielders would never work, and Barça had a lot of the ball but didn’t create anything. It didn’t help that Luis Suárez played poorly. With two players walking in the first half, Athletic found it easy to neutralise Barça’s ball circulation by blocking the way for Antoine Griezmann to run into space.

In the second period, Quique Setién did something revolutionary and used his subs early in the half. Riqui Puig came onto the pitch and changed the whole game. He turned Barça’s ball circulation into something more concrete, and their press became relentless with such an energetic midfielder on the pitch for more than a few minutes this time. Also, Iván Rakitić‘s entry added some energy in a midfield that was in need and his goal, created by Lionel Messi, was a demonstration of his enthusiasm. All in all, a game where the substitutions made an impact and where Setién should take notes for further games if he wants to win this league title.

Sergio Busquets’ calmness is his best quality as he transmits it to his teammates like a virus. The holding midfielder disrupted Athletic’s rhythm as they couldn’t get past him because of his repeated interceptions. In front of the defence, in the centre of the park or just near the box, it felt like Busquets always intercepted the ball and recycled possession so well with his precise passing that makes his character all too loveable. Next to Puig, Busquets rested a bit and eventually came off to relax after intense games in the past two weeks.

On the eve of Catalonia’s Nit de Sant Joan, as well Leo Messi‘s 33rd birthday, Barcelona snatched a narrow win against Athletic Club de Bilbao. And it was all thanks to incredible contributions from the Barça substitutes. Quique Setién had come under immense scrutiny after the draw against Sevilla for not utilising his bench properly, but boy did he turn that around.

While prior to his 33rd birthday, and recording an assist, Lionel Messi performed below his own standards against Athletic Club | Photo by Joan Gosa / Xinhua via Imago

The introductions of Iván Rakitic, Riqui Puig and Ansu Fati completely changed the rhythm of which looked like ending in another dull performance and poor result. Rakitić controlled the tempo and scored the winning goal after a lovely combination with Messi. Puig and Fati meanwhile provided exactly the burst of energy, dynamism and incisiveness that the blaugrana needed. A much needed victory.

20-year-old talent from La Masía Riqui Puig didn’t even start the game. He replaced Arthur Melo in the 56th minute and yet, the impact he made was staggering. There is very little disputing the fact that Riqui Puig changed the entire tempo of the game. Barcelona were once again looking static and lifeless until Puig entered the field.

He immediately started providing incisive passes, calmly resisted the opponents’ pressure and carried the ball forward immensely well. The move that led to Rakitić’s goal also began with a brilliant pass from Puig to break the lines. A tremendous performance from the youngster, staking a major claim to more minutes. And with Sergio Busquets suspended for the game against Celta, the mouthwatering prospect of more game time for Puig is seemingly inevitable.

With Barcelona’s search for the big prize of La Liga, it was the diminutive youngsters who had to come to the rescue for the locals. And Iván Rakitić, of course. Riqui Puig and Ansu Fati added the personality and fresh air to a veteran and declining squad, while Rakitić provided the quality, expertise and, obviously, the winner after another uninspiring first half.

Athletic Club had introduced many changes in their starting line-up, leaving Ander Capa, Iñigo Martínez, Dani García, Raúl García and Muniain on the bench. Still, they had felt very comfortable against the predictability of Barcelona. The second-half substitutions changed that. Apart from Rakitić’ goal, the young and exciting Riqui and Ansu warned the established veterans with their desire and self-sufficiency. Despite their status, the more proven stars should not rest on their laurels.

A young prospect being the best of the match while being a substitute? There’s nothing Riqui Puig can’t do. Completely changing the rhythm of the game with his introduction, he added vitality, dynamism and mental and physical agility once he came on. Those who have watched him regularly at Barça B, though, should not be surprised by this.