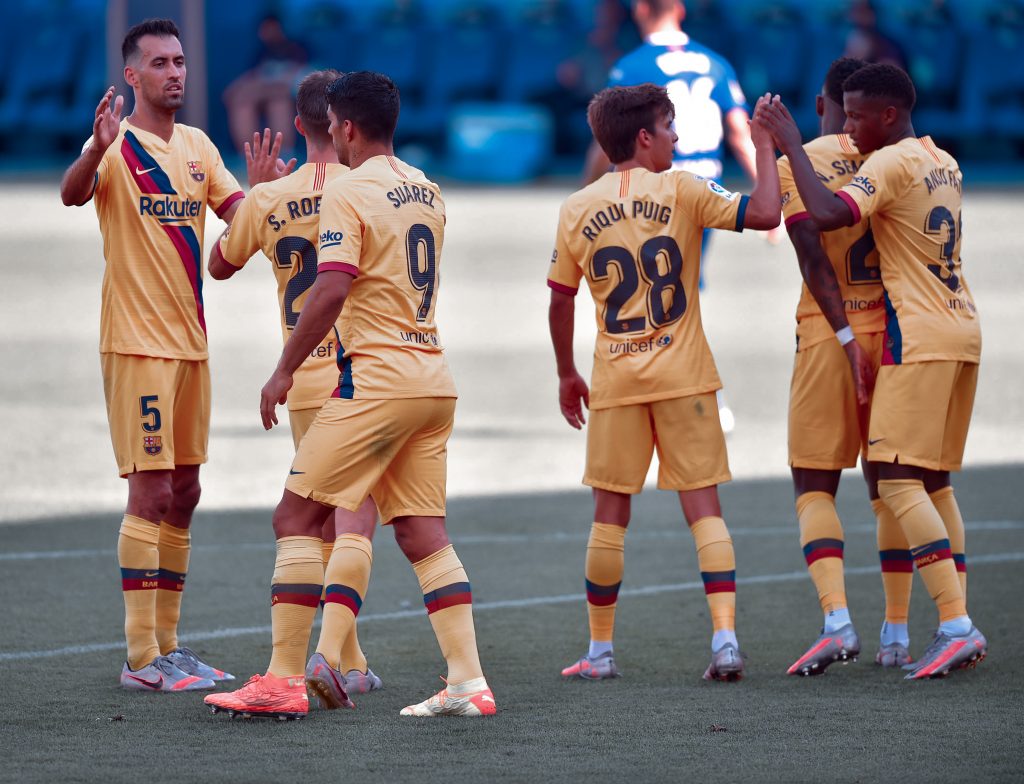 After finally some positive sensations to end the league season, our editors share their takes and player of the match on the convincing Barcelona 0–5 win against Deportivo Alavés.

With the league already lost to Real Madrid following Los Blancos‘ 2–1 win over Villarreal and Barcelona’s 1–2 loss against Osasuna on matchday 37, the blaugranas at least needed to deliver a satisfactory performance against Deportivo Alavés to end the La Liga season and regain their lost confidence. That is just what they did, scoring five goals and conceding none at Mendizorroza before getting some rest ahead of August’s Champions League. Following Sunday’s win, our editors share their opinions and standout performers from Barça’s latest victory.

A good springboard for the Champions League

With the fate of each team already decided, this match-up was going to be unpredictable. Either we would have seen the team’s playing like they have nothing to lose, or playing like they don’t have anything to play for. Thankfully, we saw both team playing with passion and enthusiasm.

“We have talked a lot, and it has helped ease the situation for us”

Barcelona, with a small squad, were quite good in attack and Alavés’ attacking football often allowed the visitors freedom to attack immediately. This was a match where both teams could have scored more than they did. Alavés just weren’t clinical when finishing whereas Barcelona hit the woodwork multiple times. The 5–0 victory was well-deserved after some excellent performances from some individuals playing for the Catalans.

This one was quite tough, with Lionel Messi deserving it as much if not more. However, the fact that this is the first time that Riqui Puig is getting so much first-team action and that it is basically his breakout season even though he has been popular for a while is incredible. For a breakout season and a player who is so inexperienced at this level, Puig performed beyond all expectations.

He received the ball in many dangerous places, always aware of the surroundings and calmly making the best decision. He was, next to Messi, the biggest asset in transitioning into attack. Puig’s passes were pinpoint accurate and perfectly weighed. Alavés allowed Barcelona a lot of space through the middle which benefitted the young Spaniard highly. He could have easily gotten three assists, to cap off a performance which definitely puts him on the radar to start against Napoli.

Some good signs at last

FC Barcelona finally found their scoring boots while routing Deportivo Alavés with five goals to nil. In a promising performance that might well be considered as “too little, too late”, the blaugranas showed great movement, coordination and dynamics. That all these heroics came in a match that was deemed irrelevant and meaningless is a fact. But that does not take away a good display of beautiful football, especially from a team that desperately needed a break from all the bleakness surrounding them both on the field and off it.

Barcelona travelled to Vitoria with a thin squad owing to absences due to suspensions and injuries. While Gerard Piqué, Junior Firpo and Iván Rakitić were suspended, Antoine Griezmann and Samuel Umtiti were out with injuries, which meant that the coach had to introduce some young faces in the starting line up. Those young faces, Ansu Fati, Riqui Puig and Ronald Araújo, showed the squad and its manager what it was missing, in terms of pace and transitions, and underlined their own respective cases for more chances and a permanent promotion to the senior squad.

The integration of youth with experience paid good dividends as the team exhibited quick transitions, relentless press to retrieve the ball, and a solid, coordinated backline. The latter point has to be underlined as the team was left with no regular defenders when an injured Clément Lenglet left early in the second half. His role was then taken up by Arturo Vidal, who combined with Araújo decently. What helped the backline more, was that there was much more activity in the middle of the park, where Puig’s quick movements created problems for the opponents.

The connections also looked good, especially between Riqui and Ansu Fati, the frontline of Fati, Suárez and Messi, between Messi and Puig, etc. The seniors were also seen to be showing faith in the new kids by seeking them out with the ball as well as with words of advice. Over all therefore, a game with good vibes that will definitely boost the team as they shift their focus towards the second leg game at home with Napoli for the Champions League round of 16.

For far too long now, Barcelona has been trying to find a creative outlet in the team not just to help Lionel Messi, but to take some of the responsibilities off of his shoulders. Players have come and gone, but no one really looked like they were tailor made for that role. Riqui Puig’s performance on Sunday, therefore, must have come as a breath of fresh air to the squad, its manager and the fans around the world.

As has been reported by various outlets, the three big chances Puig created yesterday was the first time someone other than Lionel Messi did that for Barcelona since April 2018. With two assists and a scorching long ranger that shook the cross bar early on in the game, Puig absolutely lit up the ground yesterday.

Constantly looking to create chances, advance the ball and attack, Riqui soon started attracting defenders and thereby created more space and openings for Messi. It was an altogether brilliant performance from the youngster who, in my opinion, has just made the case for a starting role in the upcoming European tie against Napoli.

Too little too late

At the end of the tunnel, there is a light. Barça’s season has been too hectic, and fans have asked themselves if the team still has it in them. The game against Alavés, similar to the dominant win at Villarreal, was sumptuous. Yes, Alavés were open and perhaps already at the beach, but this should not discredit Barça’s hard work. As Messi said, when Barça play like this, they can win the Champions League.

“When we are at our best, no team can beat us”

The culés played with purpose while finding spaces, first through Jordi Alba and Sergi Roberto, then through Nélson Semedo. It was nice seeing the players actually living up to their potential, even though Luis Suárez could have scored more than once. It was a perfect afternoon for Barça, as they played some exquisite football while Messi broke the assists record in one season in La Liga. That chipped ball to Ansu Fati, and that run by the youngster, were just superb. It was champagne football, especially with the third goal, where Messi, Alba and Suárez combined for a great strike reminiscent of the liquid style Barcelona used to play.

For once, Barça followed their great first half with an identical second. Same intensity, same purpose, same ball rotation. Everything was free-flowing and fluid, and the Catalans added two goals, with Riqui Puig assisting twice in total. These were Puig’s first two assists in the league. However, it was too little too late to show that kind of character in La Liga. For the Champions League, though, playing like this will be key to play big dogs like Bayern, Manchester City or Real Madrid.

Lionel Messi is the Man of the Match, but my standout performer would be Riqui Puig. Why?

The La Masía graduate created three big chances. It is the first time since April 2018 that a player not named Messi has created three big opportunities or more for Barça. This stat is worrying, but Riqui has erased it from the history books. The Spaniard was everywhere, as he ran miles and miles on the pitch while not looking remotely tired at all. Also, his two assists, the first to Leo and the second to Nélson Semedo, were two line-breaking passes into dangerous positions and he put his teammates into marvellous areas before shooting.

Riqui has undoubtedly cemented his place in the first team for the Champions League and next season. If he can replicate his stellar form, he will be one of Barça’s most valuable assets.