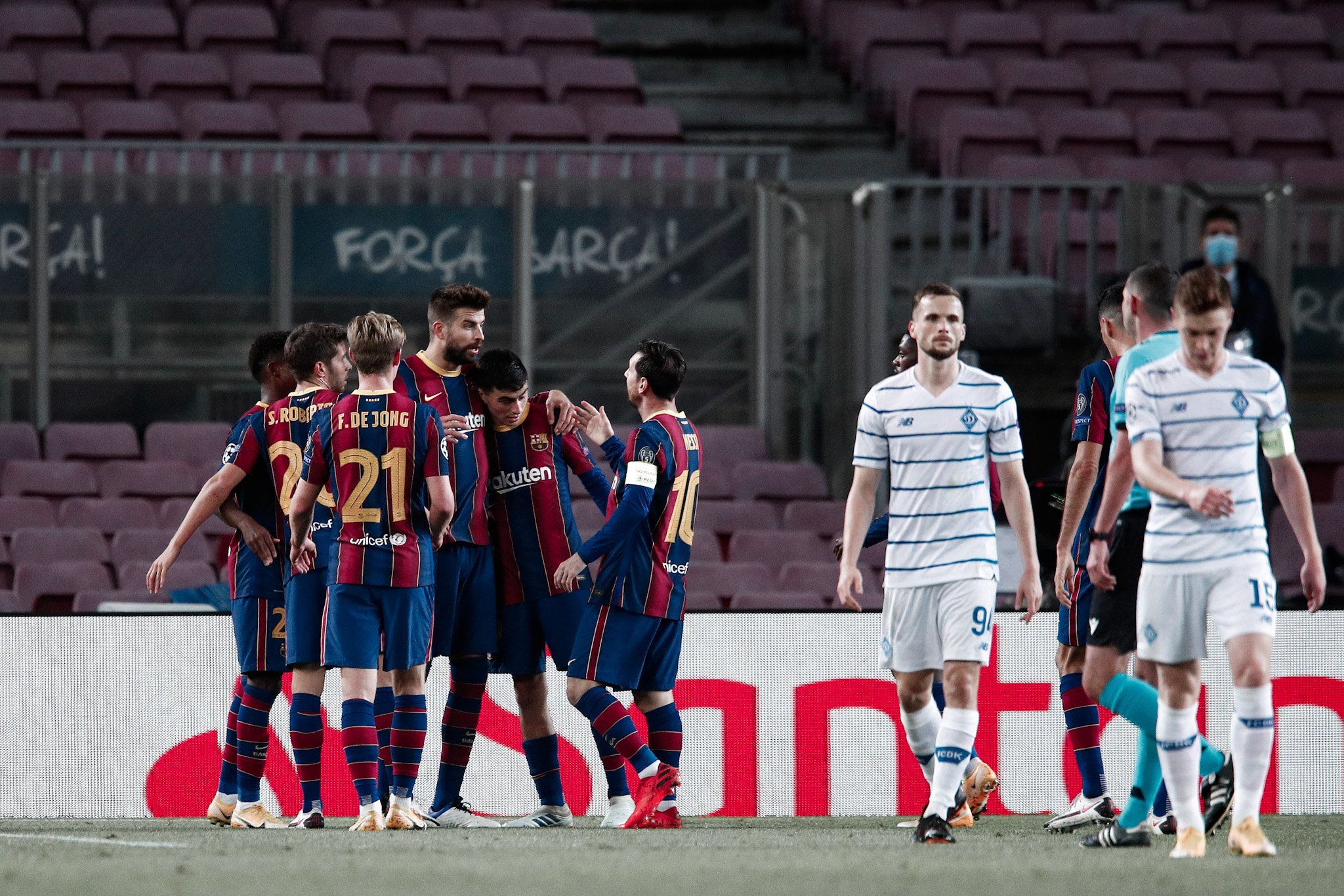 As Barcelona look to bounce back from a disappointing result against Atletico Madrid, they face Dynamo Kyiv in the UEFA Champions League. Kyiv will be looking to get their first victory in Europe against an injury-ridden Barcelona squad.

On 4th November 2020, as Gerard Pique scored against Ukrainian side Dynamo Kyiv in the 65th minute, there was a feeling of satisfaction surrounding Barcelona even though they continued their perfect Champions League campaign. This time around, the Blaugrana travel to the NSK Olimpiyskiy to face Dynamo Kyiv and continue the incredible record of no Champions League group stage losses since the 2016/17 season.

Though veteran defender Pique scored in their last meeting, he will not be playing this time around after a terrible injury sustained against Atletico Madrid. This is not the only issue Barcelona face. They find themselves 12th in the La Liga table after their recent loss. This is a team that is undergoing major changes on and off-the-pitch.

Pique’s injury will stir up a lot of trouble for Barcelona. (Photo by GABRIEL BOUYS / AFP)

There are positives such as more youth being integrated into the team, the resignation of Josep Maria Bartomeu, etc. However, the negatives are overshadowing the positives. 12th in La Liga, Messi still not certain on his future, the many injures are among other problems that the club faces.

Despite this, Barcelona will be looking to secure a victory here against a Kyiv team that faces major selection problems. One of the key players, Artem Besedin, is banned due to crimes related to doping, and many first-team players have tested positive for COVID-19.

However, this Kyiv have done well in the league this season. With 10 matches played, they find themselves at the top of the table with just one match lost. Winning their last match against Inhulets’ 2-0, it means they have won 4 out of their last 5 league matches.

What can we expect from Barcelona?

Under Ronald Koeman, Barcelona have non-negotiably played a double pivot, with players being played out of position towards the end of matches to incorporate a double pivot. Though there were some reports suggesting that a 4-3-3 might be seen, it still looks more likely that Koeman will continue with his favoured two-in-the-centre.

With Frenkie De Jong and Busquets out of contention, Miralem Pjanic will certainly start, and alongside him, Carles Aleña could be the other pivot. It could be Riqui Puig as well, but Alena has been played as a pivot in one friendly match as well as towards the end of the last Dynamo Kyiv match. That, and the fact that Koeman hasn’t given Puig more than 10 minutes in a competitive game this season.

In defence, with Clement Lenglet the only first-team centre-back, Oscar Mingueza is expected to start, with Dest as the right-back, and Jordi Alba down the left. Philippe Coutinho played a few minutes against Atletico and he has completely recovered from his injury. This would be a good chance for him to gain some match sharpness, and he is hence expected to start as the mediapunta.

? — Lucescu (Dynamo coach) “Barcelona is Barcelona. Of course, the presence of Messi is always an advantage, but to the extent that he is absent, Barcelona will probably do better defensively.”

Antoine Griezmann as the striker, Pedri down the left and either Ousmane Dembele or Fransisco Trincão as the right-winger will complete the attack.

Barcelona are expected to attack from the start and continue this perfect Champions League campaign. This match should be a fairly comfortable one for the Blaugrana, so we will certainly see them play the usual attacking, possession-based football.

What can we expect from Dynamo Kyiv?

Last time around against Barcelona, Kyiv were heavily dominated. One of the main reasons for this was an understandable lack of confidence. They would try to build-up from the back and eventually just lob the ball upfield. It seems like that’s the foundation that they are lacking, and it should be the first change they should make.

The back-four in their lineup looks to be decided, as they are the four best defenders they have as we will see later on in the predicted lineups. In midfield, the pivot spots are up for grabs, and in the attack, De la Pena, Buyalskiy, and Supriaha are very likely to start. The only thing to be decided would be whether they go with a 4-3-3, or more likely, a 4-2-3-1.

Another issue that the Ukrainians faced was being efficient in transitioning from midfield to attack. Vladyslav Supriaha had to drop back too often, and he was rarely given good passes to capitalize on when he was up-front. This is something which must change this match.

The third aspect of their game to change would be their pressing, and ball retention. As the graphic below shows us, Dynamo were very inconsistent in their pressing and looked to force Barcelona wide. This would be a good strategy ideally, but the complete reactiveness, rather than proactiveness they showed in their defence was disappointing.

We will most likely see Supriaha playing off Buyalskiy, with De Pena and Sharapenko down the wings. The left-wing with De Pena would be the more mobile one, and hence he might see the attacking emphasized down the left.

Supriaha is expected to contribute to the build-up, but finding him in good positions is key for Kyiv. In defence, one of the pivots and the centre-halves will likely be tasked with the task of containing Barcelona’s striker and attacking midfielder.

The pivots, most likely, will be a deciding factor. Their decision making and knowing when to contribute down the wings in the press and when to cut out passing options to Barcelona’s creative players will be crucial.

All in all, Kyiv could look to attack well as they so often do, but with changes to make it more efficient in transitioning from the middle to the final-third, and in defense, be more proactive than the last time they faced Barcelona.

Although 20-year-0ld Vladyslav Supriaha has had an underwhelming campaign so far with just no goals in the Champions League and just 2 in 8 matches in the league, he is arguably one of the most talented players Kyiv have and the one with the highest potential. Sharapenko has the ability to influence the midfield significantly, but if Supryaga gets the space, he can make Barcelona pay.

Supriaha (L) needs to be kept an eye on. (Photo by LLUIS GENE / AFP)

Often playing as the sole striker, it’s up to Carlos de Pena, and either Victor Tsygankov or Gerson Rodrigues to make sure the ball reaches him as the wingers. The attacking midfielder, Buyalskyi, has the job of releasing these players and finding space near the box. However, Supriaha has been suffocated this season, and the wingers have failed to deliver. With two of them, Tsygankov and Rodrigues, unavailable Supriaha can still have a great game for two main reasons.

The first being the fact that potentially Oscar Mingueza will be starting for Barcelona, and he has been playing at a much lower level in Segunda B so far. The second, only one pivot travels, Pjanic. Either Alena or Puig might play in the other pivot spot, which would give Buyalskyi more space than De Jong or Busquets might.

If Koeman plays a 4-3-3, there would again be more space for Buyalskiy and Supriaha than last time around. Though it has been an underwhelming campaign from the young striker so far, this match is a big chance for him to step up and the situation looks almost ideal for him to capitalize upon.

Position in the Ukranian Premier League

This is a Barcelona side that has been underwhelming this season, even when the expectations weren’t very high, to begin with. With 12 points from three games, and the many injuries, and two key players rested, rotations are imminent.

Kyiv have a chance to make the most of a wounded Barcelona team. However, the fact that they themselves have a large number of missing players, and that the Barcelona squad is still of a much higher level, the Catalans should win this one, although not without a few hiccups on the way.