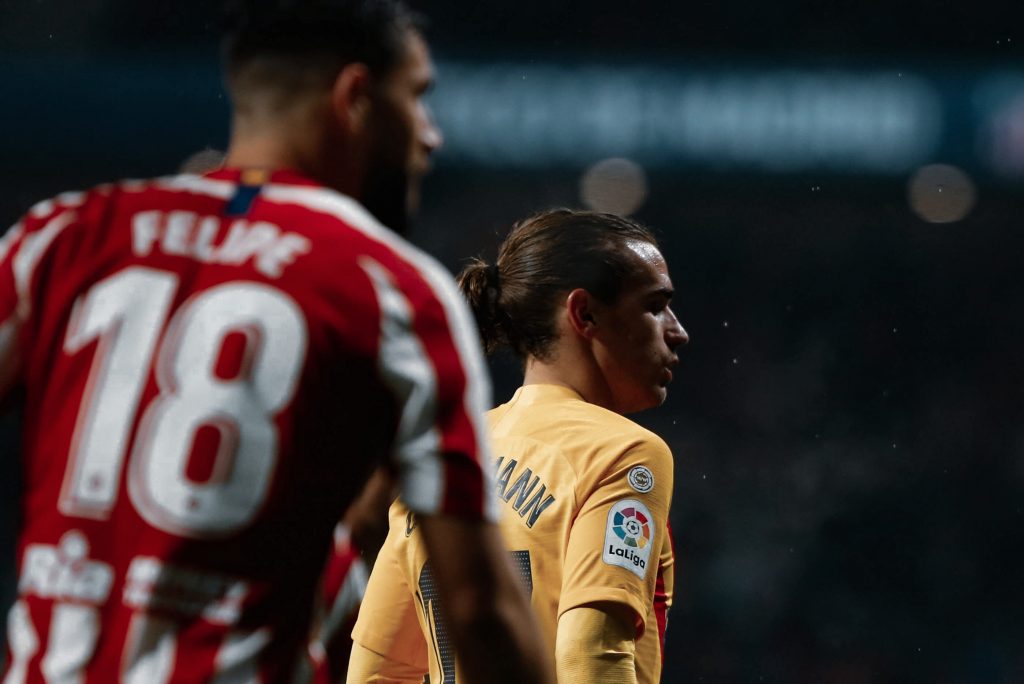 The excitement before the season’s restart has been justified by a neck-to-neck title race that has entertained the neutrals. However, from Barcelona’s standpoint, the title seems to be slipping away. Real Madrid picked up all three points against RCD Espanyol. And so, the gap at the top has widened from a mere head-to-head to two points. The Barça home clash with Atlético de Madrid on Tuesday could prove to be the title decider in La Liga.

Quique Setién’s Barcelona camp is currently in massive disarray. Off-pitch problems, dressing room politics and players vocally speaking against the manager, the focus seems to be entirely away from the La Liga title race. And this is what Real Madrid’s fans would be pleased to be witnessing. There’s no way anybody in the Catalan’s side can deny that they are distracted by the various dramatic enigmas that are surfacing off the pitch. Nevertheless, with Diego Simeone’s Atlético de Madrid visiting the Camp Nou in one day, anything short of perfection could see the defending champions lose more points.

Let’s be honest. Barça is handling the Arthur Melo situation in the worst way possible. Arthur’s departure to Juventus is about to be confirmed, even if he will have to end the season at Catalonia. As a consequence, not only is the board receiving heavy criticism from the Spanish press and fans, but it is unable to control the unrest that’s arising in the dressing room. One can only feel sorry for coach Quique Setién for being put in a situation beyond his control. The Cantabrian has only been trying to keep his head on the issues on the pitch as he is aware that he is powerless in all other aspects.

In contrast to Barcelona’s rather shocking activities, Real Madrid seems to be in a composed situation. It is worth noting that even they are on the verge of losing a player who was touted to be a permanent piece in their puzzle, Achraf Hakimi. The Moroccan is expected to join Inter Milan without a buy-back clause installed in his contract. Even though their fans are disappointed, the club seems to be handling the entire situation subtly.

There isn’t much noise coming out from Los Blancos‘ camp. Despite losing a firm contender to their right-back spot for the years to come, the club only appears to be focussed on the challenge ahead. The media isn’t clawing into Real Madrid’s transfer activity because of how silently the rumours have emerged. The rumours, negotiations, and agreements all happened within two or three days. Unlike Barcelona, who made Arthur’s issue public for the past three months, Madrid have been careful.

Thus, one team was able to keep the entire situation under control, and the other has gone into a self-destructive mode.

Much to the distress of Barcelona, they are facing the mightiest challenge amidst this distracting period. Atlético de Madrid is already a team that’s impossible to beat because of its defensive rigidity. We have seen on several occasions in the past that the clashes with Atleti required individual moments of brilliance to break open their shape. A majority of Barça’s wins against them were 1–0s solely because it usually took over 60 or 70 minutes to find an opening. Sometimes, the meetings were even decided in the final moments through Lionel Messi’s match-winning expertise.

Barça’s lack of complete concentration was evidently visible in their previous fixture against Celta de Vigo. As much as the players may try to deny it, it was clear that their heads weren’t entirely in the game. Both the goals that Celta scored could have been avoided if the footballers were a bit anticipative. Iván Rakitić lost the ball and Samuel Umtiti did not track back properly for the first goal, while the second, although a set piece, could have been stopped if the defensive wall had been careful.

The lapses of concentration allowed the home side to pull the scoreline back to square twice. The blaugranas had received some appreciation for the form they had been displaying at the back. Before the Celta game, they had kept clean sheets in their last five games. Just when fans and pundits began to praise the defence and shift their attention to the static midfield, the backline faltered. Samuel Umtiti had a match to forget and has convinced the fans that he no longer has a place in the squad.

A proficient team like Atlético de Madrid would find it easy to exploit the various areas of vulnerability that the Catalans exhibited on Saturday. The colchoneros already beat Barcelona in January’s Spanish Super Cup, which was the final nail in Ernesto Valverde’s coffin. Even back then, several off-pitch issues disrupted their focus, which saw them knocked out prematurely and cost Valverde his job.

Now, the situation seems like a Déjà Vu for the fans. Some have already begun to call for Setién‘s head, which is not only surprising but shameful. The 61-year-old has been giving his all for the club. However, he is unable to bring the best out of the players due to the looming predicaments. Anything aside from a win against Simeone’s side would put the race beyond a comeback. And it’s clear that if Quique fails to retain the title, he might not be the coach for next season.

An absolute lack of game management

One thing that Barça should learn from Real Madrid is their ability to see off games this season. Especially since the restart, los merengues haven’t been playing champagne football. That said, they are still able to win their games. Against Eibar, Valencia, Real Sociedad and even Espanyol, the backline has been shaky. But still, they have been grinding results. Usually, they inconsistently drop off due to lapses of concentration and put the title in Barcelona’s hands. But this season, Zinedine Zidane’s men have been determined to succeed.

They have won all their matches since the restart. Even if it hasn’t been in the prettiest ways, they are aware that picking up three points per game is the principle goal. We know that this isn’t the time of the year where fans would be critical of how well teams play. During a close title race, it’s more important to achieve victories no matter how under par the performance may be.

Barça’s away-day blues continue, with the Catalans dropping a majority of their points on their trips away from the Camp Nou. The gap is still only two points, and it only takes one slip up by Real Madrid for the situation to change. Notwithstanding, judging by how things are going lately, it doesn’t look like they are up for the challenge. Gerard Piqué has been vocal across social media to state that the race isn’t finished. But the team hasn’t been showing the same level of aggression on the pitch.

The fans aren’t expecting to see their club win every game from hereon by a lengthy margin. They just want Barça to win and put pressure on the league leaders. Game management is an essential quality that’s required to achieve results even with a bad performance. The azulgranas have been dominant domestically solely because of their ability to pick up clutch results. And it’s now more important to be mentally ready for winning games than ever.

Atlético de Madrid will prove to be the title-decider in the fight for the league trophy simply because of how Barcelona and Real Madrid have been playing lately. One team is distracted and bothered by matters that aren’t relevant to the pitch. The other is hell-bent on doing everything to ensure that they don’t bottle the established lead. Two points already look like a herculean margin to overcome due to Zidane’s team’s consistency. But anything beyond the already challenging gap would put the race to bed.

Atleti have their own agendas to fulfil, with Champions League qualification on the verge of being secured. Simeone will be coming with a gameplan that frustrates the home side. Judging by how Barça has been crumbling when the situation isn’t going in their favour, one can say that they might drop points once again. With Real Madrid playing Getafe Club de Fútbol in a Madrid derby on Thursday, they are likely to turn up for the occasion.

“Remember one thing, we are Barça and this is not over yet. Fighting till the end is a part of our DNA. We will fight again on Tuesday, with our heads held high”

All eyes will be on Lionel Messi to convert draws to wins. But even if he is at his best, there’s no way the club can achieve its goals without the remaining players entirely focussed. The title race is obviously not over, but if Barcelona don’t amp their game against the rojiblancos, it could well be done and dust. A win might not guarantee anything, as Madrid would still have to drop points, but a loss would end whatever hopes the blaugranas have got on retaining the title.