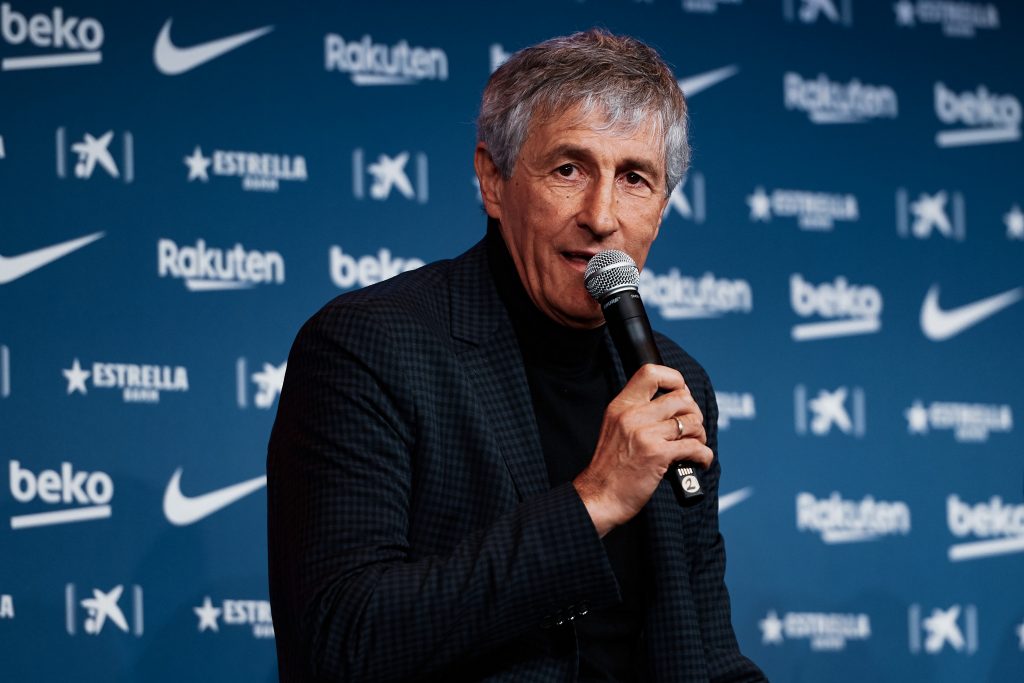 Before and right after joining Barcelona, Quique Setién shared all sorts of promising words, but he did not walk the walk. What went wrong for Quique at Barça? Is it his fault?

Press conferences are not always positive events. They are all talk, and they often bite the speaker in the behind whenever matches and results don’t go their way. Recently, Arturo Vidal opened his mouth before the Bayern game, saying that Barça is the best team in the world and that the Bavarians shouldn’t be too cocky. His manager, Quique Setién, knows a lot about press conferences. The Cantabrian coach has some history in such pressers.

Before joining Barcelona, Quique Setién was every culés‘ fantasy because of what he said publicly. From Johan Cruyff’s tactics to his boldness, Setién mesmerised a fanbase that watched him in a few games with Lugo, Las Palmas and Real Betis. It happens a lot in La Liga, and two or three games against the heavyweights usually make the masses’ judgements on coaches and players.

“When I go to a team I can guarantee one thing and that’s that the team will play well.”

Quique Setién in his presentation as a Barça manager

When Quique joined Barcelona, the Catalans thought that boldness and free-flowing football would be back at Camp Nou, and it did, for three matches. Setién’s debut was against Granada, and despite only winning 1–0, his side made over 1,000 passes and played Granada, a team that reached Europe this year, off the park. It was smooth football, and the importance of Riqui Puig in the goal gave everyone confidence in Setién, who was going to trust the Barcelona youth.

After the Valencia 2–0 loss in January, though, Setién seemed to go back to Ernesto Valverde‘s tactics and scrapped the three-at-the-back formation for a 4–4–2 or 4–3–3 with Arturo Vidal on the left, just as el Txingurri did.

In the next few months came dull and outdated football, with no substitutions despite having five and playing the same old guard and losing the league in the process. This title loss wasn’t only on Setién, but it was partly his fault for reverting to some ineffective tactics. Let’s be honest, culés would have trusted the process had Quique Setién showed more boldness with his line-ups and use of youngsters.

“Everyone has the same role, the same options to play. I want everyone to think that you have to win the spot every day, but it’s true that there are players who have won a lot over the years.”

Quique Setién in his first pre-match press conference at Barcelona

However, since 2017, there has always been a nauseating atmosphere around the club and its heavyweights. It’s clear that Luis Suárez shouldn’t start every game in 2020, as he just comes back from a lengthy injury and is 33, but he does. It’s clear that Vidal isn’t the best option for big away games where the coach tries to control the game, while he started at Anfield and against Bayern. Jordi Alba has been faulty for at least a year, and yet he plays every clash, even when there is a young up and coming left-back in the ranks. Iván Rakitić‘s post-quarantine form was indeed lovely to see, but he did not show enough in the past few seasons to start those crucial fixtures. These are some of the heavyweights that play every time almost without question.

When Setién tried to implement his way of seeing football, the heavyweights probably did not like it because it demanded too much running and application. That’s been the story for a few years. There’s a reason Valverde’s Athletic Club did well and play a good brand of football and Setién’s Betis received a lot of plaudits for his 2017/18 season, for both his football and his results, and they were not unanimous successes at Camp Nou.

The brand Setién proposed at Las Palmas and Betis was much better than what he offered at Barça. Something’s fishy, but it’s still Quique’s fault for not dying with his principles. Dressing room power is a problem, but Setién could have been bolder and stubborn with these players, teaching them the hard way that football is a game of understanding and principles. He failed, unfortunately.