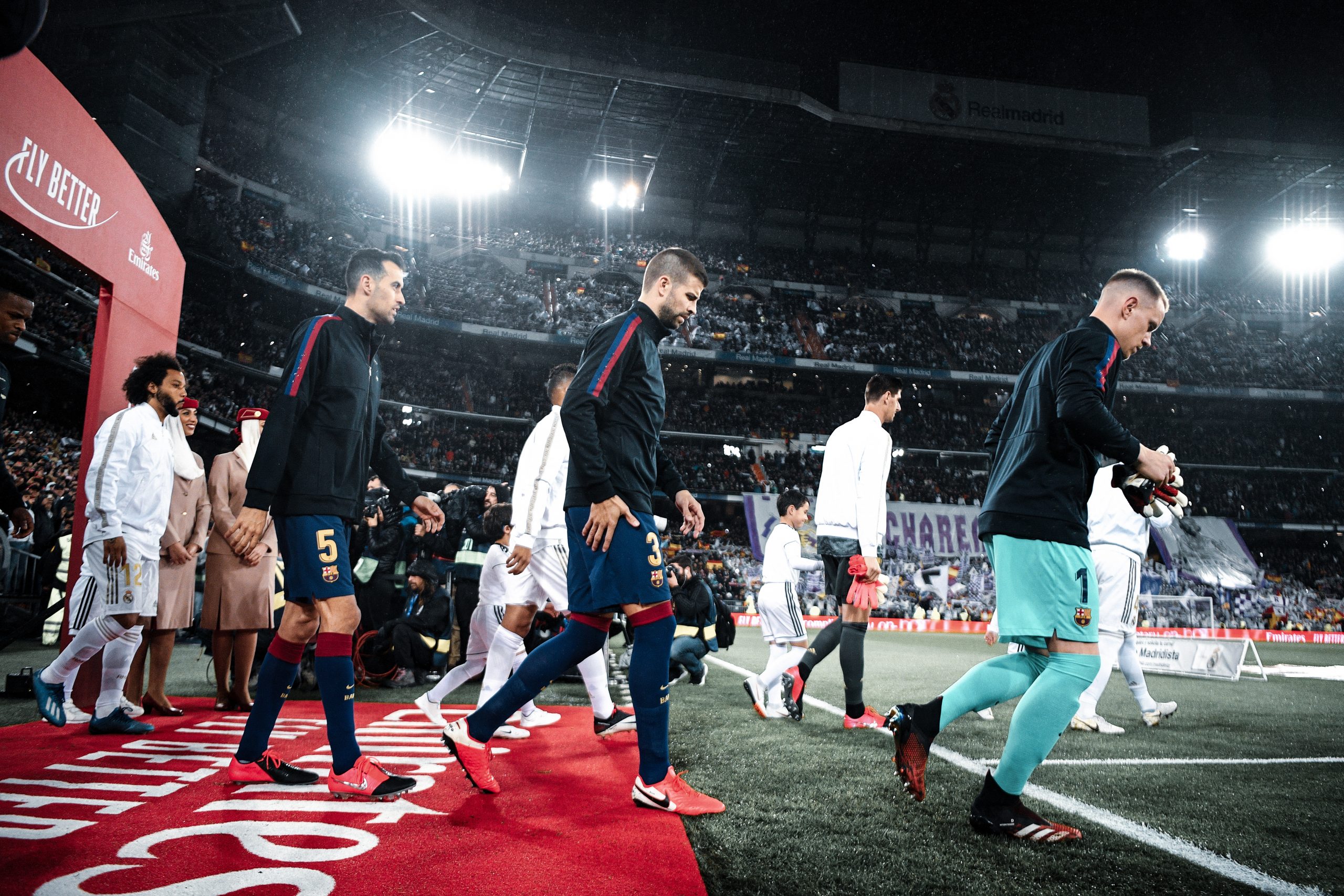 El Clásico is the biggest club rivalry in the world as its links with Spanish history make it more and more heated year after year. In recent years, Barcelona came out on top in most fixtures with Ernesto Valverde having one of the most impressive records against Real Madrid. The likes of Pep Guardiola, Gerardo Martino, and Luis Enrique, too, all have El Clásico nights they’ll surely remember for as long as they’re alive. This weekend, Ronald Koeman takes on Madrid for the first time.

Who starts? Who sits? Koeman has a lot of thinking to do. (Photo by LLUIS GENE/AFP via Getty Images)

The aforementioned coaches had set teams with players such as Samuel Eto’o, Andrés Iniesta, Xavi Hernández, and Carles Puyol at their disposal and they went to play Madrid deeper into the season than where Ronald Koeman is now. For example, in the 2-1 win at Camp Nou, where Luis Suarez scored the winner, Luis Enrique went into the game off the back of a superb run of fixtures and knew which team would start the game.

Due to the recent crisis, Ronald Koeman comes into his first El Clásico with, perhaps, some blank spaces as his team is in a transition period. After a loss against Getafe on the weekend, Koeman’s side demolished Ferencvaros in the Champions League, helping the squad gain morale. That said, he will have to thing hard and through about the team selection, otherwise it could come back to hurt the team in an important game.

With Marc-Andre ter Stegen out injured, there is little time that Neto will start this game. He has been solid so far for the Catalan giants, so it is far from being a problem for Ronald Koeman. In the defence, Koeman has other fish to fry, and the right-back position is a much more problematic one.

Roberto usually puts on a show against Madrid – but is that enough to warrant a starting spot? (Photo by MIGUEL RIOPA/AFP via Getty Images)

With Jordi Alba out for the recent few games, Sergiño Dest started the last two fixtures on the left, but the former Valencia defender is expected to be back for El Clásico, which raises doubts over who starts on the right. Rushing Alba back is not the most intelligent decision, but the defender was rumoured to be ready to play the Hungarians on Tuesday, and Koeman might have taken his left-back out of the team to start him against Madrid.

If Alba starts, which he’ll most likely do, Koeman cannot overlook Dest’s recent performances, and he should start ahead of Sergi Roberto, who isn’t in his best run of form.

With the two full-backs sorted, Koeman will surely start his best centre-back pairing in Gérard Piqué and Clément Lenglet since they’re fully fit for the game.

The former Everton manager has a clear plan at Barça, and he’s played a 4-2-3-1 in every game as Barça coach. Frenkie de Jong is a constant in the double pivot, starting every game and will undoubtedly feature against Zinedine Zidane’s side.

However, Koeman hasn’t found de Jong’s partner in midfield yet, and Miralem Pjanic’s performance against Ferencvaros was from his best. Sergio Busquets began every game prior to this one under his new coach, so getting him back in the side after rest might tempt Koeman. De Jong looked comfortable alongside both players but was evidently freer next to Pjanic. That said, it looks like a far call to see him start again.

For the mediapunta or attacking midfielder, role, Philippe Coutinho will take up that place as he confirmed his superb start to the term with a great goal against the Hungarians. Pedri should get some minutes as his recent outings have been spectacular. The former Las Palmas midfielder will undoubtedly come on, regardless of the scoreline.

Lionel Messi is the best player in the world, and he showed more intent against Ferencvaros and will most definitely start against his favourite opponents. As for the left-wing, Ansu Fati has been on fire this term and, with his performance on Tuesday has cemented his place in the starting lineup.

The big debate takes place on the right, where three players fight for the right-winger position. Ousmane Dembélé, Francisco Trincão, and Antoine Griezmann are the three players in contention to start El Clásico.

Griezmann is going through a rough patch, and while he needs all the confidence in the world, mustn’t be in the Catalan giants’ XI for the most significant encounter of the season yet.

With the World Cup winner out of the conversation, Trincão and Dembélé – both of whom made heads turn against Ferencvaros are in pole position to be the third attacker in the lineup. Trincão started the game against the Hungarians, impressing on the right, but was not efficient enough as he did not score or assist on the night.

However, a lot of attacks came from his side, something that did not happen when Griezmann was in the eleven. Dembélé, who replaced the Portuguese, was a welcomed addition to the side and his piece of skill before assisting Pedri was a joy to watch. His easy goal shouldn’t make him a clear favourite, but his performance made his chances of starting rise.

Fati has been marshaling the Barcelona attack this season – will he do it again against Madrid? (Photo by LLUIS GENE/AFP via Getty Images)

Nonetheless, Dembélé is recovering from a long-term injury and lacks match sharpness right now. The Frenchman could be an impact sub for Trincão or Fati as his pace might terrify the tired legs of fellow Frenchman Ferland Mendy. That said, Koeman could start the 23-year-old against Madrid, subbing him off early for a more lethal finisher like Griezmann.