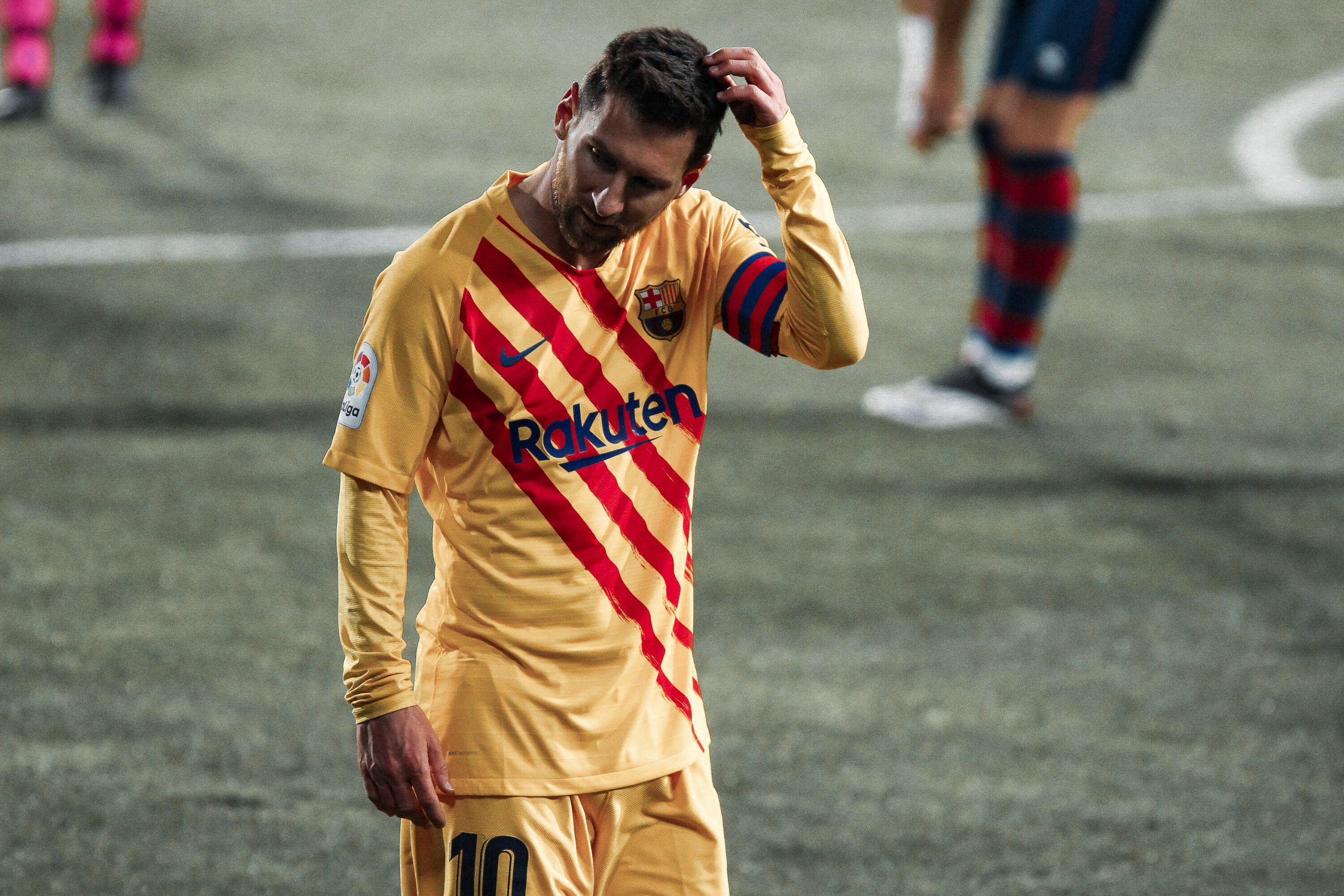 Barcelona’s small-margin victory with Huesca leaves much to be desired from the Blaugrana. Find out what went wrong for Barcelona against Huesca in this tactical analysis.

With 25 points in 15 points leading up to this match, Barcelona had more than double of Huesca’s 12 points, with a game in hand. Last year’s Segunda Division winners, Huesca have been consistently poor in La Liga. Their problems have been mostly in terms of their defensive record, with 25 goals conceded with an xGA of 19.1. Interestingly, Barcelona have faced more shots on target than the Oscenses, conceding 10 goals less.

This matchup turned out to statistically be a complete outlier, as Huesca overperformed on their xGA for once, and Barcelona only faced four shots on target. So what actually led to this? Find out in this tactical analysis.

Ronald Koeman made a choice of starting XI that could form either a 4-3-3 or a 4-2-3-1. In the 4-3-3, Pedri Gonzalez would be the left-interior midfielder and the mediapunta in the 4-2-3-1. The latter would mean that Frenkie De Jong would play as a pivot, rather than an interior. As it turned out, a 4-3-3 was employed, which meant the central midfielders played an important part.

In the 4-3-3, the full-backs would be high up the pitch as expected. Something that benefited Barcelona was the solidity upfront. Usually, when Griezmann, Messi, or Coutinho start with Pedri as the attacking midfielder, it results in too many players needing high degrees of freedom to make an impact. With Pedri often sticking to his interior role, Ousmane Dembele and Martin Braithwaite’s roles as a pure winger, and a pure striker respectively allowed for good structure upfront.

On his 500th appearance in the league, Lionel Messi started as a right-winger on paper, but he was all over the field due to his free role as we can see from the image above. In terms of his average position, Messi would tend to drift towards the centre and combine with the players down the left, especially Pedri and Jordi Alba.

Barcelona intended to keep control of the ball, create a staggered midfield to get better passing lanes and sustain the attacking play.

Under Miguel Angel Sanchez Munoz, Huesca have lined up in a 4-3-3 often. Their problems have stemmed from playing players in roles that don’t bring out the best of their abilities. For example, Javi Angle, statistically one of the best dribblers in Europe, has Javi Ontiveros in front of him.

Playing a 4-4-2 would favour them to bring the play down the wings. However, Sanchez Munoz, called ‘Michel’, has deployed them in a 4-3-3 which does not boast the interiors to provide quality balls to the wing.

Michel’s team played a 4-3-3 when attacking, and as usual, were skewed to the left. The 4-3-3 wasn’t in use often, with Huesca on the backfoot for most of the match. Instead, a 4-5-1 was seen more often, with the wingers joining the midfield when defending. In the 4-5-1, the sole striker Rafa Mir had the task of harassing Barcelona’s midfielders and looking to cut-off passing lanes. He was largely unable to do this resulting in only one interception in the entire match.

In the second half, as the focus of attacks down the left from Barcelona became more threatening, a 5-4-1 was seen with Sergio Gomez dropping back into the defensive line. Pedri and Messi’s influence further aided the threat posed by Ousmane Dembele and Jordi Alba. The 4-5-1 would be a mid-block, but now with five at the back, Huesca played a low-block.

When building-up, the Azulgranas looked to play down the wings. With Ontiveros’ technique and Galan’s speed, the left-wing had the potential to be a major threat. Unfortunately, the players were quite cautious and looked hesitant to receive the ball in the middle of the field due to Barcelona’s press. This resulted in the wingers and full-backs often being crowded out.

As mentioned earlier, Huesca were severely lacking in attack. Ontiveros was often looking to drive the ball forwards, but there were a few problems. Firstly, Mikel Rico and Pedro Mosquera were hesitant to move up the field. Barcelona’s interiors were immediately falling back, along with Ousmane Dembele. This meant that Huesca were rarely able to get possession centrally.

With possession down the wings, the next problem was with the position of the forwards. As Gomez was rarely able to drive the ball forwards on his own from the right, he would look to get in the box. Here, we have an image of Huesca’s attempt at getting players into the box.

The problem with this was, the players in the box were too static. There were minimal to no attempts to make runs to receive the ball in space. Here, we can see that there is a 3v3 in the box. Following many unsuccessful attempts at looking to poach the ball in the box aerially, it wasn’t very reassuring to see that Michel’s team kept trying the same move repeatedly rather than innovating.

The lack of attacking potential from the left-wing is apparent from this visualization. There are very few passes from the half-spaces into the box from the right. Especially from the visualization of passes from the middle third to the wing of the final third, we can see the problem of having little incisiveness.

It would be inaccurate to call it a battle, rather than a bloodbath, if not for the second half. In this section of the analysis, we examine how the midfields were key for either side.

In Barcelona’s 4-3-3, Frenkie De Jong and Pedri would look to receive the ball in the channels quite high up the pitch. As we can see from the following heatmap, Barcelona players concentrated in and around zone 14. There was a significant issue that consistently troubled Huesca; zonal marking. Michel’s side would try to mark Barcelona’s players zonally, which would be fine, if not for the free role Messi had, as well as the freedom Pedri was given.

Though the latter issue was solved by instructing Jaime Seoane to man-mark Pedri for the majority of the second half, Messi was consistently finding players behind the lines. This allowed De Jong and Pedri to have a massive influence on the game. However, an issue that the zonal marking limited was the runs by the midfielders into the box. De Jong and Pedri would regularly get into the box, however only the Dutchman scored as Pedri’s most significant effort with an xG of 0.60 was saved by Alvaro Fernandez.

Huesca’s three-man midfield was only visible when building-up. With Mosquera at the base, Mikel Rico and Seoane would look to move up the field. The issue here was the spacing. The central-midfielders would regularly be positioned too high up the field, and finding grounded passing options was a major challenge.

Huesca did make some cohesive changes in the second half, as the substitutes helped the team press high. Often pressing in a 4-2-4, Barcelona had a hard time retaining possession. However, this change on Michel’s part failed to play a major part in the overall match as it was most efficient only for the last 20-25 minutes. As the following xT visualization shows, it was only towards the end that the Aragon outfit was able to impose themselves on the game.

For the Catalans, this was a victory that could have had a larger margin. An xG of 3.21 to Huesca’s 0.26 was a fair representation of the match. Though this victory was expected, Koeman’s side should not be too happy with the end of the match. Huesca’s high-press proved to be something the team couldn’t deal with, which is a troubling sign. Despite this, the three points are valuable three points, and Barcelona continue their bumpy ascent up the table.