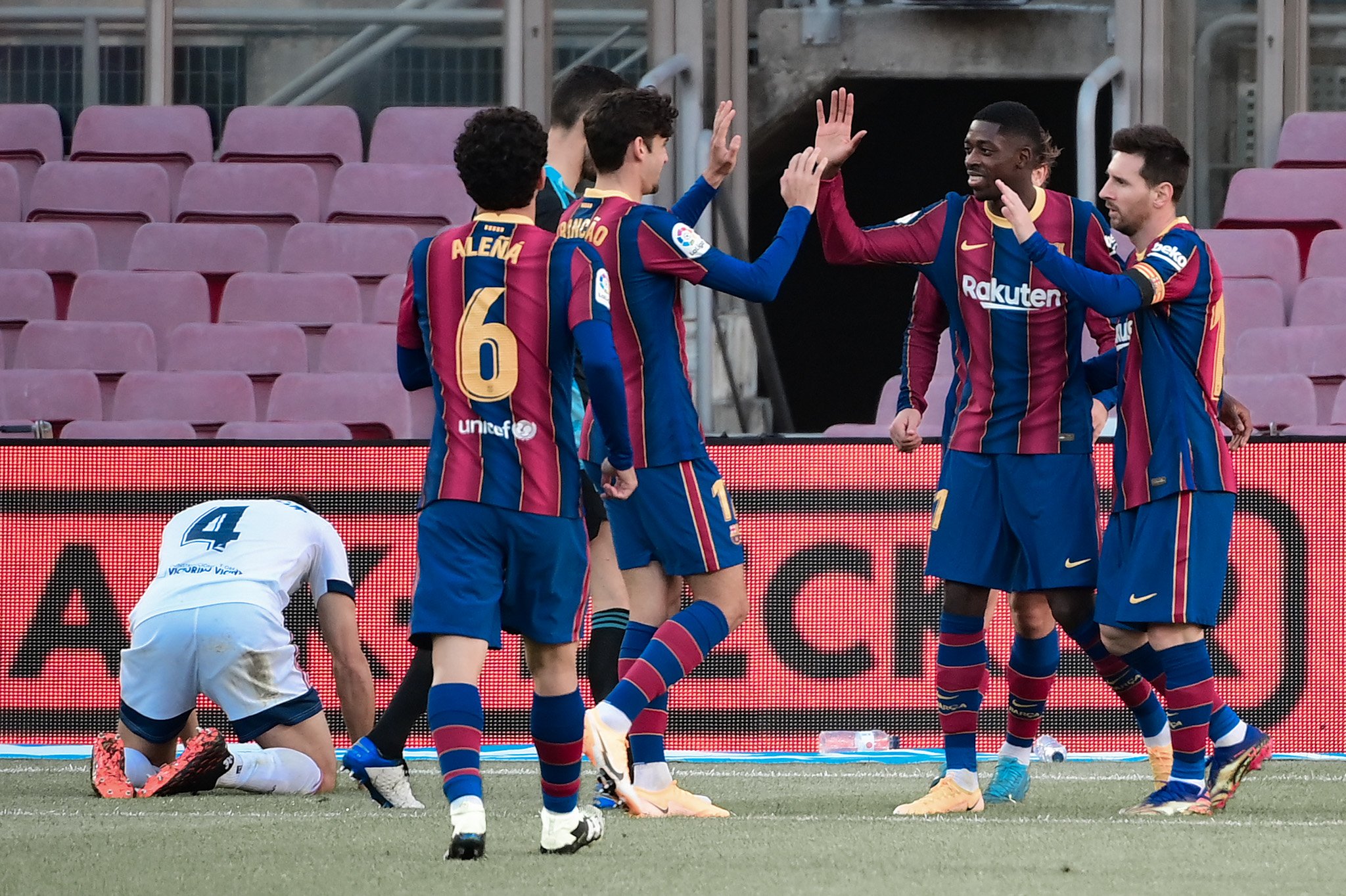 In collaboration with Anurag Agate

Ronald Koeman’s Barcelona put four unanswered goals past Osasuna in gameweek 11 of La Liga as the Blaugrana returned to winning ways in the league.

An Osasuna side with only one win in their last five games travelled to the Camp Nou to face a Barcelona side with the same record. Jagoba Arrasate’s Osasuna looked to capitalize on an injury-ridden and struggling Barcelona side, whereas Ronald Koeman’s Barcelona were under immense pressure to start performing at least in the vicinity of the level they are expected to be at.

As the lineups were released, there were a few surprises in store. For Osasuna, it was a fairly straightforward lineup, as well as an expected squad with multiple injuries. This meant that ex-Barcelona B player Kike Saverio was called up. Their lineup suggested the usual; 4-4-2 with pacey wide-midfielders, and players adept at playing the mid-block demanded by Arrasate.

Ronald Koeman’s Barcelona had rigidly been sticking to a double-pivot throughout the season. With only one natural defensive midfielder in the lineup, fans expected it would be a 4-3-3, or, more realistically, a double pivot with Pedri as the more mobile of the duo. It turned out to be the latter, with Sergio Busquets being brought in at half-time.

At the end of the 90 minutes, the Catalans had put in a performance they could be proud of.

With 18-year-old Pedri as the other pivot alongside Frenkie De Jong, this was a different player profile than the ones we have seen from Koeman’s team so far. There is usually one pivot who is mobile, and the other who acts as an anchor. However, Pedri and De Jong, both, had a lot of positional freedom.

In this example, we see how De Jong created space for his fellow pivot. With Osasuna playing a front-two, they could commit at most four players without them being caught out by Ter Stegen’s pinpoint passing. Taking advantage of this, De Jong drops back to attract one of Osasuna’s midfielders towards Barcelona’s penalty area.

As we see, this meant either of Sergino Dest or Jordi Alba could receive the pass, but Pedri was the more direct, and the more progressive option. In this example, Pedri moved into the space left in the right of midfield, where he was able to receive a pass easily. This was a recurring idea with both pivots dropping deep, but Pedri due to his lack of match experience playing as a pivot, lost possession a few times in Barcelona’s half.

In attack, Barcelona were especially fluid. The front-four of Lionel Messi, Antoine Griezmann, Martin Braithwaite and Philippe Coutinho complimented each others’ abilities well. As the striker, Braithwaite’s runs were focused between Osasuna’s centre-halves and full-backs. Nacho Vidal was given an attacking role, which meant that Jordi Alba was able to find Braithwaite, or Griezmann when he drifted towards the left, with an overlapping pass behind the defence.

Coutinho, who is usually given a free role, was operating on the left, especially in the channels. This front-four was especially beneficial to him. With Griezmann and Braithwaite making runs behind the opposition defense often, he had more space then he would have had with just one striker unsettling the defenders. He was able to thread through some key passes thanks to this.

Arrasate’s Osasuna side has played a mid-block/low-block most often this season. Their 4-4-2 is such that they look to force the opposition wide and prevent play through the middle, as shown below in the heatmap.

In Osasuna’s block, there was a certain degree of organisation. The issue was in their sluggishness in regaining the shape when transitioning from attack to the defence which allowed Barcelona to exploit them. In the image below, we see their defensive organization. The back-four would be trying to catch Barcelona offside and prevent play through the middle.

The four-man midfield was the heart of the block. Depending on the ball’s position, these four would move and attempt to cut-off the passing options.

In attack, the wide-midfielders would play as wingers, using their pace to try and catch the Blaugrana off-balance. The midfielders would all move forward and make runs into the box. A winger receiving the ball on the edge of the box and looking to unleash one of the players running into the box was a common characteristic.

Barcelona came up with an overwhelmingly dominant display for the bulk of the match. There was nothing fluky about the scoreline; it was thoroughly deserved. Here are the game stats at a glance:

Barcelona outshot and outpossesed Osasuna comfortably. They had a staggering 90% passing accuracy while forcing Osasuna to commit misplaced passes much more frequently. Barcelona’s much lower PPDA (a metric that is used as a proxy for pressing) also indicate a better pressing as compared to Osasuna.

As far the quality of chances go, Barcelona fully deserved to have scored the four goals. Shown below are the shot=maps and the xG flow:

Osasuna perhaps were unlucky not to score even once. Some fortuitous and last ditch defending, and attentive goalkeeping gave Barcelona a much-needed clean sheet.

Finally, shown below is a comparison of territorial dominance. It is measured by a metric called field tilt. Field tilt measures the percentage share of final third passes completed.

As can be seen, Barcelona were overwhelmingly dominant in terms of territory as well. There was a small period of time where Osasuna dominated the final third exchanges. It also marked the period where they got off some decent quality shots at Barcelona’s goal. While it was an uncomfortable little stretch, Osasuna could not get any goal out of it.

Buildup to the goals

Here we take a look at the goals Barcelona scored. Barcelona could have opened the account fairly early on. Griezmann latched on to a fabulous through ball, beat his marker and cut back the ball inside the box. Coutinho saw his shot from the cut back blocked goal line.

The first goal came from a really scrappy bit of goalmouth melee following some lovely buildup. Osasuna’s keeper Sergi Herrera blocked two shots but was helpless to prevent Martin Braithwaite’s shot off his thigh bundling into the net.

The second goal came in the 42nd minute. Following some nice little layoffs and interchanges between Messi, Braithwaite and Philippe Coutinho, the ball was laid to an onrushing Jordi Alba in the box. His pass was cleared, only for Antoine Griezmann to smash home from outside the box past the hapless keeper.

Coutinho scored in the second half following some fine defensive work high up the pitch by Antoine Griezmann. The assist came from Griezmann as well.

But arguably the goal of the night came from Lionel Messi. And it had to. Following an emotional week that brought the sad news of Diego Maradona’s demise, Messi paid tribute to his hero with a brilliant goal. Receiving the ball high up the pitch from Trincao, Messi dribbled past a defender, drove into the left in a manner so typical of his style, and unleashed a rocket. It was so accurate, the diving goalkeeper had no chance at full stretch.

Following the goal, Messi removed his jersey to reveal a Newell’s Old Boys jersey, numbered 10, to pay his tribute to Maradona. It was a heartfelt moment, for him and the fans alike. Here is yet another view of the goal in full animated glory:

Barcelona took full advantage of a very weak Osasuna team to put up a dominant passing display. They could penetrate Osasuna’s box almost at will. The attacks came from a plethora of sources, from all possible zones. Barcelona were particularly exemplary at utilizing zone 14 and the half-spaces to sound effect.

Osasuna mainly created from wide areas. They could barely progress through the centre, and enjoyed particular success getting the ball into the box down their left channel.

Here we take a look at the key passes. Barcelona, as mentioned before, could attack the box at will. The bulk of the chances they created ended up inside the box. Osasuna’s key passes ended mainly outside the box. Lionel Messi led the way in key passes, ending with 4 to his name. Jordi Alba had 3 key passes, Griezmann had 2, and Frenkie de Jong, Coutinho and Francisco Trincao had 1 each. Ante Budimir of Osasuna registered 2 key passes, while six other Osasuna players registered 1 each.

Finally, we take a look at switches. Barcelona conjured up a huge number of switches in the game, in contrast to many of their previous outings. Messi produced some of the most magnificent long balls this game.

Barcelona were the better pressing team in the match. They pressed high and to good effect. They had a much higher press intensity as indicated by a lower PPDA in the data table. Here is Barcelona’s defensive heatmap:

Osasuna tried to press high too but did not enjoy as much success for most of the game. Barcelona could mostly escape their press with ease. The Dutchman would constantly drag an Osasuna player with him in the deep buildups.

Ter Stegen could then distribute the ball with ease. In the second half, Oscar Mingueza had a moment of lapse. And for fifteen minutes in the second half, Barcelona did struggle against Osasuna’s press. But other than that, they faced no real trouble.

The images below show the incomplete passes by either team. They clearly show the difference in struggles to build from the deep: Osasuna misplaced far more passes. As mentioned before in the data table, they had only 72% passing accuracy.

Not everything was rosy for Barcelona during the game. They suffered yet another injury setback in defence as Clement Lenglet had to hobble out of the game in the second half with a sprained ankle. While Frenkie de Jong filled in fairly comfortably, this injury stretches Barcelona’s defence further thin. Against Ferencvaros in the upcoming midweek UCL game, Barcelona will have no senior centre back in the team. Ronald Koeman will have to do a fair bit of brainstorming before the game to come up with a defensively stable lineup to face the Hungarians.