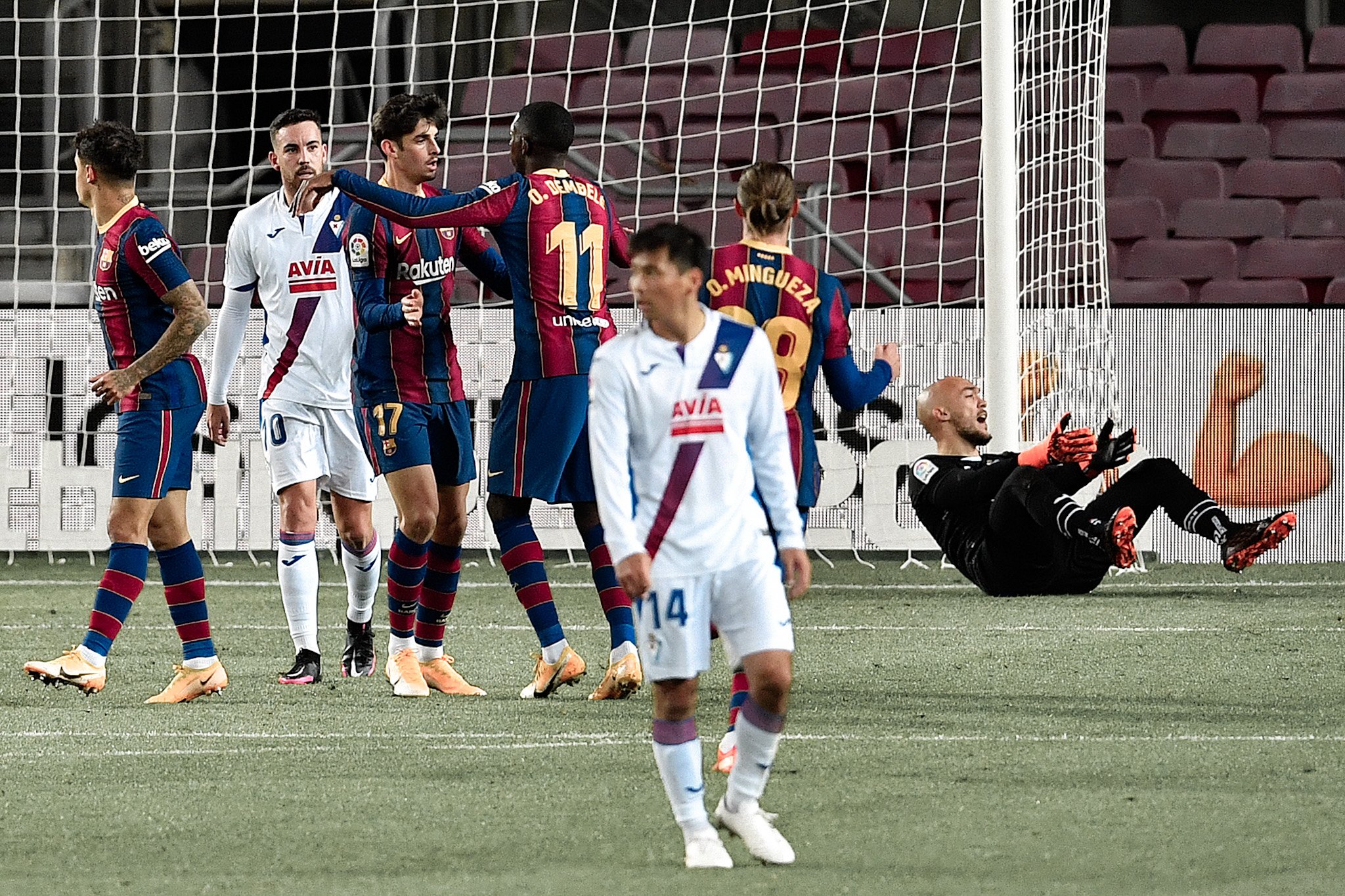 Barcelona’s draw with Eibar leaves much to be desired from the Blaugrana. Find out what went wrong for Barcelona against Eibar in this tactical analysis.

Coming into the match against Eibar, Barcelona were the strong favourites. Not only due to their record against Los Armeros, but also because of the recent performances of both sides. Sadly, it was not to be as Ronald Koeman continued breaking records he would have never wanted to.

A 1-1 draw after an Ousmane Dembele goal to nullify Kike Garcia’s earlier contribution to the scoreline meant that Barcelona remain sixth, whereas Eibar climb up to 15th.

Barcelona lined up in a 3-5-2, with three centre-backs, retained from the last match. Lionel Messi, excluded from the squad due to injury, was naturally a notable absence which meant the 3-5-2 was more of a 3-4-1-2 with Pedri Gonzalez as the player behind their two strikers, though the pass map suggests otherwise due to Martin Braithwaite dropping back often.

In the 3-5-2, the wing-backs would naturally be high up the pitch, and the back-three would be stretched wide. This worked against Real Valladolid because they defended in a 4-4-2, which would mean a constant 3v2 advantage for Barcelona’s defenders against the two opposition forwards.

A three-man backline was a questionable decision on Ronald Koeman’s part. Jose Luis Mendilibar’s Eibar has consistently pressed with four players, and with no reason to expect anything else, it was no surprise to see Barcelona’s defenders struggling to build-up.

Eventually, Frenkie De Jong or Miralem Pjanic would have to drop back to receive, as the starting positions of the full-backs were very high, and passes to the wings were risky as we see in the image below.

When pressing, Eibar would man-mark Barcelona’s central players and look to create superiorities there to contest for the second ball. When the ball was distributed to Sergino Dest, the right wing-back, the Azulgranas would be immediately pressed. This caused a lot of forced mistakes on the American’s part with possession lost 14 times in the 45 minutes that he played.

Instead, a four-man backline would have been a better choice as the full-backs, centre-halves, and pivots would find it easier to form triangles. This change was made in the second half.

A part of the tactical aspects of the matchup – the difference in purpose between both teams. Barcelona were lining up in this formation only for the second time this season, with the last time being their previous matchup. Eibar have very often lined up in their 4-2-3-1 which would naturally make it a good choice against stronger sides.

Jose Luis Mendilbar’s Eibar side was excellently tuned to the players’ strength, whereas Koeman’s Barcelona made the same mistake many times and failed to adapt for half the match.

For example, the fact that Eibar were heavily skewed with an emphasis to the left was very apparent even without the above pass map. Whether this was not conveyed to the players by the backroom staff, or whether the players noticed this but failed to adapt, it was something that should be unacceptable for a side like Barcelona. The equivalent of banging on a wall hoping it breaks, Barcelona simply failed to look for a door to get to the other side, continuing to make the same mistake continuously.

Eibar had a clear gameplan in mind; press high, force mistakes, play aggressively and impose their presence on Barcelona. Eibar lined up in a 4-2-3-1 as expected, with the absence of Bryan Gil being something they sorely noticed. Despite this, there was an emphasis of attacks down their left-wing as stated earlier. There was significant asymmetry as Edu Exposito, Takashi Inui, and Sergio Alvarez were all highly active through the left half-spaces and channels.

When building-up, Marko Dmitrovic was instructed to play long-balls as the team formed a compact shape past the halfway line. Being the aggressive side that they are, winning second-balls was the intention if not the first aerial duels. Once in the final-third, Eibar looked to overload the left-wing. However, Eibar’s off-the-ball work was the real point of interest.

Eibar in the press and transitions

After losing possession, Eibar would immediately press when the ball was on the wings. When central, they would look to regroup and position themselves optimally, and then proceed to press. Here, we have an example of how Eibar managed to maintain superiorities while pressing.

The ball is with Dest on the right-wing. Of course, the central defenders were left unmarked by Eibar, as they looked to surround the full-back and press. To counter this, Miralem Pjanic would come in to receive the ball. This would still mean a 4v2 as we see here. Frenkie De Jong was simultaneously man-marked, and the last of the forward passing options, the forwards, were in a 4v3 situation. By neglecting Junior Firpo and the centre-backs, Eibar were able to maintain superiorities when pressing.

Suppose Barcelona were in a 4-2-3-1 or a 4-3-3, the lower position of the full-backs would have two advantages. Firstly, better passing lanes to the centre-halves. Secondly, involving the goalkeeper in the build-up. Not only this, but there would also be an extra forward to drop back and provide a passing option.

The earlier mentioned four-man press was Eibar’s go-to system when pressing. A 4-2-4 with Sergio Alvarez and Papa Diop as the two central-midfielders, the press would initially look to overload the central areas, forcing Barcelona to go wide. As we see in the image, the yellow arrow indicates the run being made to press Clement Lenglet even before receiving the pass. Leaving Junior Firpo as the only forward passing option on the left, Lenglet would be inclined to make that pass or play a long-ball forward.

Kike Garcia and Edu Exposito would look to cut-off passing lanes to Barcelona’s midfielders, aiding in the press. Once possession was regained, these two players would have the job of getting into the box to either hold-up the ball and involve others or look to win aerial duels.

Conclusion: Too little, too late

In the second half, Dest was subbed-off to bring on Ousmane Dembele, with Oscar Mingueza slotting in as the right full-back. Barcelona had come full-circle, a 4-2-3-1 was formed with the trademark double-pivots. This did provide some advantages, such as better passing lanes being formed, and better triangulation. Chances, both in terms of quality and quantity, were created in the second half, which were not capitalized on.

Despite this, a draw was a fair representation of the matchup. It could have very well gone the way of the Catalans as a missed Braithwaite penalty, and a 1v1 chance not being taken by Dembele leading to much higher xG for Barcelona.