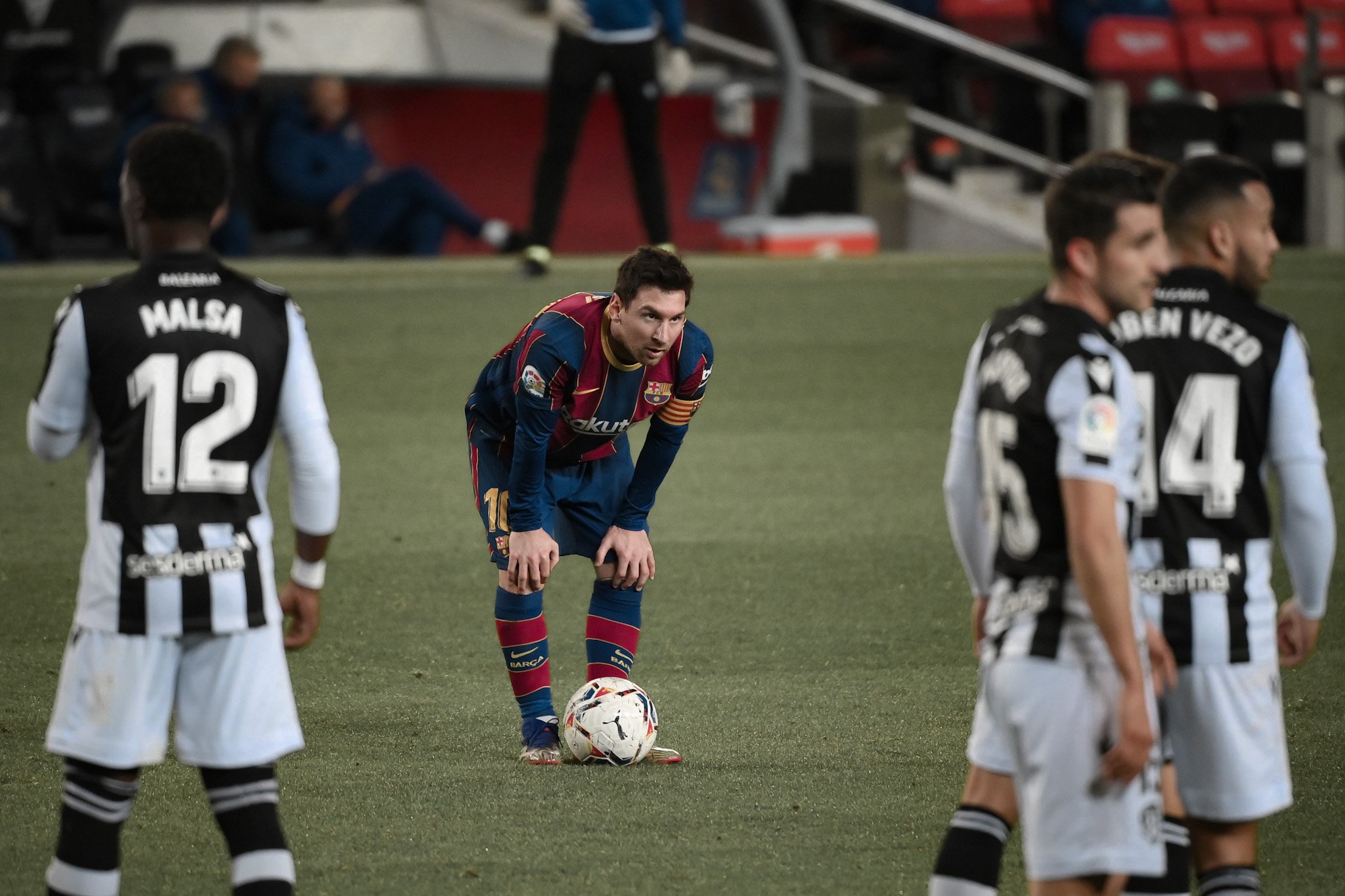 As a struggling Barcelona side faced Levante at the Camp Nou, the recent results suggested that the matchup would be a close one despite Barcelona’s excellent record against Levante. At the end of the 90, a hard-fought 1-0 victory to the Catalans was highlighted by some interesting tactical trends. In this analysis, we take a look at Barcelona as well as Levante, and how the teams operated.

Ronald Koeman’s Barcelona has used a 4-2-3-1 formation throughout this season. There has been a certain rigidity about this decision with the Dutchman playing creative players such as Pedri Gonzalez in the double-pivot to accommodate the formation. Hence, a similar formation was expected before the match. However, Barcelona lined-up in a 4-3-3.

In defence, Ronald Araujo and Clement Lenglet were joined by Sergino Dest on the right, with Jordi Alba on the other flank. Sergio Busquets acted as the pivot in a midfield-three, with De Jong and Philippe Coutinho acting as interiors. Danish forward Martin Braithwaite was deployed on the left, with Lionel Messi through the middle and Antoine Griezmann down the right.

When building-up, Barcelona preferred to play short passes and work the ball out of defence. To facilitate this, Busquets would drop back between the central-defenders, where he would look to receive the ball and play passes forward. The full-backs would stretch wide and move up the field during this. The trio of Busquets, Araujo and Lenglet would form the first line of the build-up, with the full-backs being the closest players to receive.

This would mean that the distance between the defence and the interiors would be significant. To compensate for this, one of the interiors would drop back slightly to receive as we can see from the image above, or either of Messi or Griezmann would do the same. Lenglet and Araujo would have significant space to progress into with the ball as well along with Busquets.

Building up from the back was rarely a problem for Barcelona. With the pivot dropping deep and Levante defending in a 4-4-2 – due to Gonzalo Melero dropping back into midfield from the original 4-3-3 – the Catalans enjoyed a 3v2 situation at the back.

Levante’s four-man midfield would be compact even when Barcelona progressed the ball forwards, and Paco Lopez’s players would allow Barcelona’s full-backs to have possession past the halfway line as well without significant pressure.

When transitioning to the attacking phase, Barcelona’s full-backs would be heavily involved in the attack. Both Dest and Alba would move very high up the pitch. With these two players and the front-three, Coutinho and Frenkie de Jong had plenty of passing options. This was a factor that forced Levante to stick with a low-block, illustrated in the previous image.

Messi would come short to receive the ball, from where he could make the most of his creativity and passing ability. With the exceptional dribbling ability that the Argentine possesses, it also allowed him to find space on his own and look for a shot.

Antoine Griezmann and Martin Braithwaite would be looking to make the runs and attempt quick combinational play with other players. There was a clear lack of width, with no natural wingers starting for Barcelona. This had many repercussions with the most significant one being the lack of passes from the wing as the image below illustrates. Picking up the ball around the box, Messi or Griezmann would look to dribble in and play incisive passes between the opposition’s full-back and centre-halves.

The lack of width is also visible from the touch-based heatmaps shown above. The threat from wide areas was primarily from the full-backs. Messi and Griezmann were operating in and around zone 14 with Coutinho drifting towards the middle as well.

Paco Lopez’s Levante lined up in a 4-3-3 as well. With the captain, Coke, as the right-back, Carlos Clerc was the other full-back. Ruben Vezo and Sergio Postigo were deployed as the centre-halves. In midfield, Mickael Malsa was joined by Vuksevic with Jorge de Frutos in front of them as the attacking midfielder. Up-front, the narrow front-three was composed of Roger Marti, Dani Gomez, and Gonzalo Melero.

When building-up, there shared some of the tactics Barcelona implemented. Malsa would drop back between Vezo and Postigo, with the full-backs higher-up the field. Malsa, who had an excellent game, was crucial for Levante in possession and building-up. However, the midfield was not similar to that of Barcelona’s. Malsa and Vukcevic would form the base of midfield, with De Frutos in front of them.

Melero played in the left of the front-three, but as expected, the 26-year-old would drift towards the centre. His role as the left-forward was essentially for the sake of the attacking structure. De Frutos would receive the ball in the right-half spaces often, and Melero would operate in the left half-spaces but often come in towards the middle.

Initially, the midfield had two players at the base with one attacking midfielder. As the match progressed, Lopez’s side played a highly staggered midfield. Rather, Malsa would stay deeper than usual and the other two midfielders would retain the previous positions. As we see in the image below, the staggered midfield meant that Levante would attempt passes that were more direct. This often resulted in numerical superiorities down Barcelona’s left because of De Frutos’ and Melero’s positioning.

As the match progressed, Levante’s midfield lacked organization. In the second half, the over-reliance on direct passes was a factor that contributed to Frenkie De Jong being able to thread a pass through to Messi as two of Levante’s midfielders were already committed to the attack.

Though the Granotas looked to build-up from the back, the passes were much more direct in the transitions. De Frutos, who was the spearhead of the midfield, would look to find spaces in front of Barcelona’s defence.

Line-breaking passes from the other two midfielders were a common sight. Here, we have an example that illustrates the same. There is a huge void in midfield where no Levante player is occupying space. Gomez and Marti would be looking either to make runs or pin Barcelona’s defenders.

Barcelona were unable to use an offside trap because of Melero and Marti, who would be ready to receive the ball and look for quick passing options in front of Barcelona’s defence while Gomez made runs. With De Frutos operating in the half-space as we see in the image, he would often look to receive passes behind the lines. The following example is one such situation where he had three-four passing options due to the position in which he received the ball.

Though this was the primary means by which Levante attempted transitions, looking to combine with the forwards was the secondary option. This would have been successful, if not for the intense press applied by Barcelona down the wings. When Levante switched the play to the wings, the interiors, as well as full-backs from Barcelona, would immediately look to regain possession. Though Barcelona didn’t regain possession many times down the wings, this was down to the Levante full-backs passing back or to the middle rather than a problem with the press.

Though the 1-0 victory was far from efficient, there were some positives to be taken from the match, starting from Messi’s performance. Ronald Koeman played a 4-3-3, showing that maybe his tactical rigidity so far could change. Players like De Jong, and Pedri in the second half, looked sharper in a 4-3-3 than in a 4-2-3-1. Though there were many problems visible, this system would do very well with directness down the wings once Ousmane Dembele and Ansu Fati return from their injuries. After Barcelona’s victory over Levante, the Catalans now have 17 points in 11 games. A poor haul, but victories that are ground out like this one do a lot to help the team in the long run.