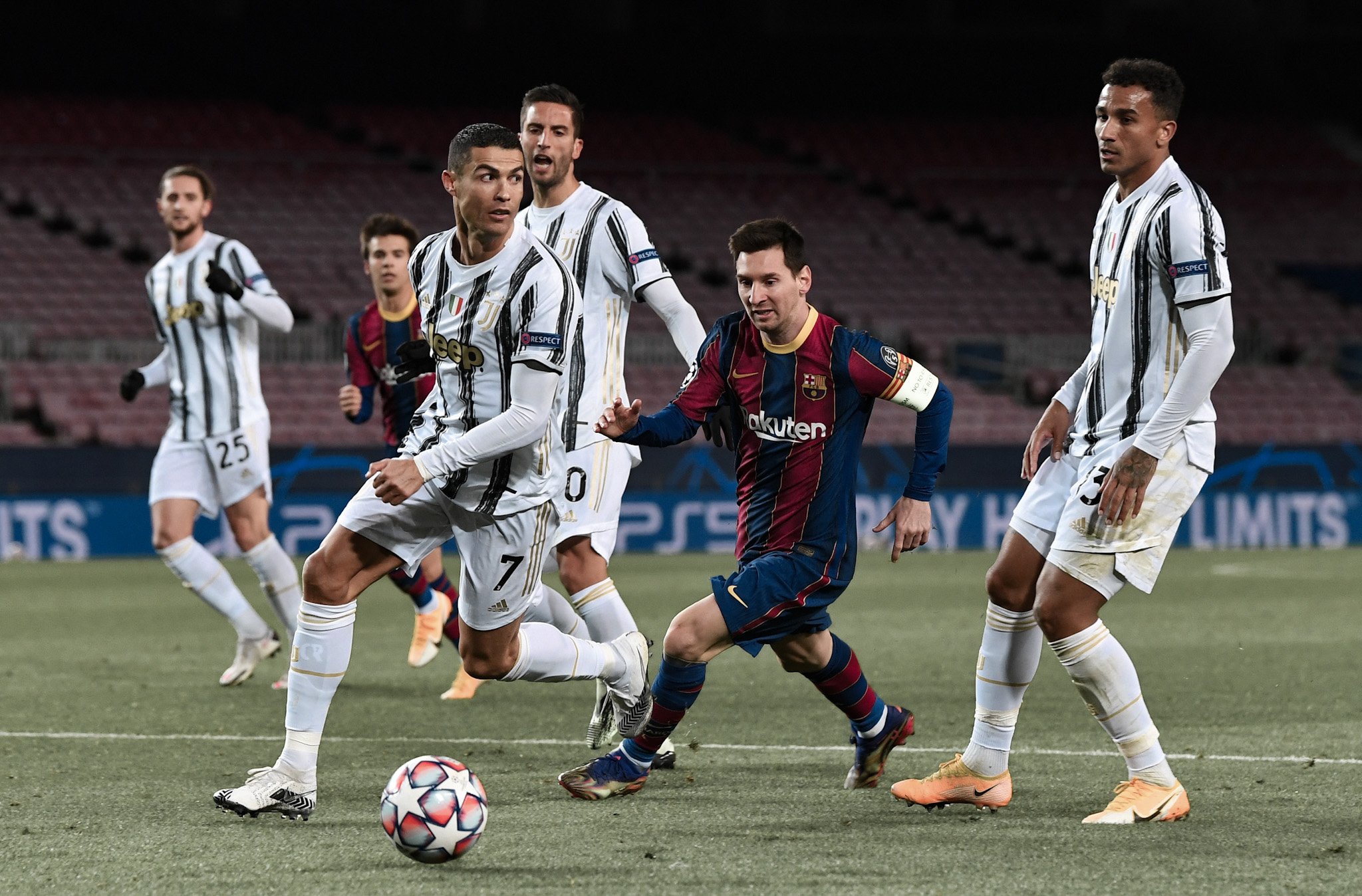 FC Barcelona stumbled to an embarrassing defeat in their final Champions League group game against Juventus. This ended their 38-game unbeaten home streak, as well as their so-far unbeaten record in the group stages this year.

A team marred by injuries. Absence of defensive cohesion. Gaping holes in the midfield. Too many ball-centric players upfront and not many runners. All sorts of issues came together to haunt Ronald Koeman’s Barcelona as they lost 0-3 to Juventus in the final game of UCL group stages. In the process, they also gave up their top spot. In this article, we take a detailed look at the action that unfolded.

With Ronald Araujo and Samuel Umtiti making comebacks from injuries, Ronald Koeman had a bit of depth to select from for the game. He went ahead with Araujo and Clement Lenglet as the center back pairing ahead of Marc-Andre ter Stegen. Sergino Dest and Jordi Alba were the full-back duo. Miralem Pjanic and Frenkie de Jong formed the midfield double pivot. Lionel Messi started as the number 10, behind Antoine Griezmann. They were flanked by Pedri and Francisco Trincao.

In the initial stages, this prominent 4-2-3-1 structure was prominently visible in the buildup stages of the game. When building from the deep, one of Pjanic or de Jong would drop back to help in ball circulation. In the advanced zones, Pedri would move into the half-space to let Alba dictate the wider zones. Trincao would often do the same, dropping in the half-spaces to let Dest occupy the wider channels, as shown below.

Trincao and Pedri tucking in higher up.

However, later in the second half, Greizmann started dropping into the wider left-hand channels. He would help out defensively wide, and then make a couple of quick passes from out wide before making an infield run into the box. Pedri would often push higher up to press and often move towards the right flank to assist in the buildup. These movements would explain the skewness of the pass map above.

Griezmann wide left in the attack

In the second half, there were sweeping changes, as Martin Braithwaite and Riqui Puig got to feature up field alongside the defensive trio of Junior Firpo, Samuel Umtiti and Oscar Mingueza. Puig played in the hole, Messi pushed higher up, and Braithwaite played as sort of a left inside-forward. Griezmann played on the right-wing for the bulk of the second half.

Andrea Pirlo too was bolstered by the return of several important players like Matthijs de Ligt in defence. He went in with a 3-5-2 structure, with the ageless Gianluigi Buffon as goalkeeper, Danilo, Leonardo Bonucci and de Ligt as the three center backs, Juan Cuadrado and Alex Sandro as the wing backs. Arthur, Weston Mckennie and Aaron Ramsey formed the midfield trio, behind Cristiano Ronaldo and Alvaro Morata up front.

Of the three midfielders, Arthur and McKennie played deeper and slightly closer most of the time, while Ramsey had the freedom to push higher up and wider. Ronaldo would often drop slightly deeper and to the left to show for the ball. This would sometimes drag open Barcelona’s defence and leave a path for Morata to chase down diagonal balls slipped through. The following images show Juventus players’ heatmaps and buildup structures.

Arthur and McKennie deeper and central during buildup

Higher up, McKennie and Ramsey took turns pushing up and wide

Juventus started the game in a particularly dominating fashion, pressing intensely very high up, winning the ball back and circulating fairly easily. In the first twenty minutes or so, they had complete control of the game. That was when the bulk of the damage were done. Even though Barcelona finished the game slightly better, they were never really able to threaten Juventus enough. Here are some of the key stats from the game:

Beyond the initial 20 minutes, Barcelona were overall the better team at pressing and keeping the ball higher up the field. The following shows the territory dominance chart, measured by the percentage share of final third passes:

This pretty much shows exactly how the game unfolded. Initially pushed back, Barcelona were slowly able to make an inroad into the final third during the game. Juventus thrived on forcing turnovers deep inside their defensive third and then countering with pace.

However, perhaps the most striking of all stats is the number of shots. Barcelona had 20 to Juventus’ 8, with 7 on target, all courtesy Messi. Yet, none of these chances were of high quality. Most of them were long-range shots from outside the box, or were well-guarded and blocked by the defence, or saved by Buffon. The following shows the shot map and the xG flow chart – it’s very evident how poor Barcelona were at engineering shooting chances even with overwhelming territorial dominance upfield.

How did the goals come?

Defensive mistakes continued to haunt Barcelona in this game as two of the conceded goals came from penalties. For the first one, Araujo was adjudged to have shoved Ronaldo in a tussle for the ball. It was a really soft penalty and Ronaldo scored from the spot-kick. Soon after, atrocious positioning and lack of tracking led to Weston McKennie volleying home unmarked from inside the box.

Finally, in the second half, in yet another terrible defensive lapse, Lenglet handled the ball inside the box. Ronaldo converted the reuslting spot kick yet again.

Barcelona’s biggest attacking threat came from either the left or from the half spaces and zone 14. Alba, while defensively not so good, yet again combined with Messi for some of the shot-creating sequences from the left. Messi himself was a one-man army through the center, coming up with 11 shots and 3 key passes from the central channels. Trincao was ineffective out wide and could not create much direct danger. Dest had some interesting passes into the box that no one got to the end of.

Juventus’ bulk of danger came from the wide zones. From the deeper zones, they used diagonal balls to engage either a forward or a wingback or one of the wide CMs. From there, they would either try crosses into the box or recirculate.

Unsurprisingly, Juventus tried the switching the ball more frequently than Barcelona. Even when the switches were not successful, they were often able to win possession back from the throwins.

PPDA is a metric often used as a proxy for pressing intensity. The lower the value, more intense the pressing. While Barcelona had an overall better PPDA of 10 as compared to Juventus’ 13, it is perhaps more instructive to look into it in details.

As shown above, Juventus were often the better pressing team for bulk of the first half. It was only in the second half, after virtually confirming their position at the top of the table with the third goal, that they reduced their pressing. In the process, they did invite trouble. Barcelona pressed very high late in the second half, won back the ball frequently and often started shot-creating sequences from there. Better finishing could have resulted in a goal in favor of Barcelona perhaps, from those opportunities. Shown below are the turnover creations in the game; Barcelona had several higher up the pitch.

A glance at the unsuccessful passes tell us similar stories. Initially Barcelona struggled against the high press and ter Stegen’s distribution suffered. Even the center backs failed to circulate the ball well. As a result, the goalkeeper as well the center backs were forced to go long, and Juventus won back the ball with superior aerial dominance.

Similarly, Juventus were forced into wider zones in defence by angled runs from the frontline, and resulting passes intercepted by the midfield. However, half-hearted pressing sometimes would often lead to bypassing the first wave of press. From there, with the midfield duo spread apart, it would be easy to use third-man passes and diagonal balls to launch fast breaks up field.

Having discussed pressing, let’s discuss the defending in the second goal. It was calamitous to say the least. Barcelona seemed like a team that has not been coached defensively. Too many players do not know which runs to track. Too many players keep getting dragged out of position. The sequence started with a simple throw in, where Pjanic failed to restrict Ramsey from going past him.

There are issues already, like de Jong being higher up and Pedri being in the pivot position to defend, plus Pjanic being left behind too easily. After that, a simple lay off to McKennie led to Lenglet stepping up to block a potential shot. Ronaldo also making a run similar to McKennie created a problem as to who to track.

Lenglet made the decision to track Ronaldo’s run. At this point, one of Araujo or Pedri should track McKennie, preferably Pedri, as Araujo had Ramsey on his shoulder to deal with.

However, Pedri did not track the run. Lenglet was left with Ronaldo. Even Araujo did not notice either of Ramsey or McKennie. As the cross from Cuadrado was not closed down quick enough, it made its way into the box, where McKennie met it unmarked.

Amazingly enough, even if McKennie missed, Ramsey was unmarked inside the box to guide it in !!! That’s pretty terrible marking and tracking all around by Barcelona. The goal was a collective failure.

Coming on the back of a shock 2-1 loss away at Cadiz, this game completed a miserable mid-week for the Barcelona players and fans alike. The team looked more disfunctional and disjoint than ever. Koeman’s Barcelona, bluntly put, look woeful and uncoached. Serious work need to be put in for the performances to go up from here, or else we are looking at a really, really long season !