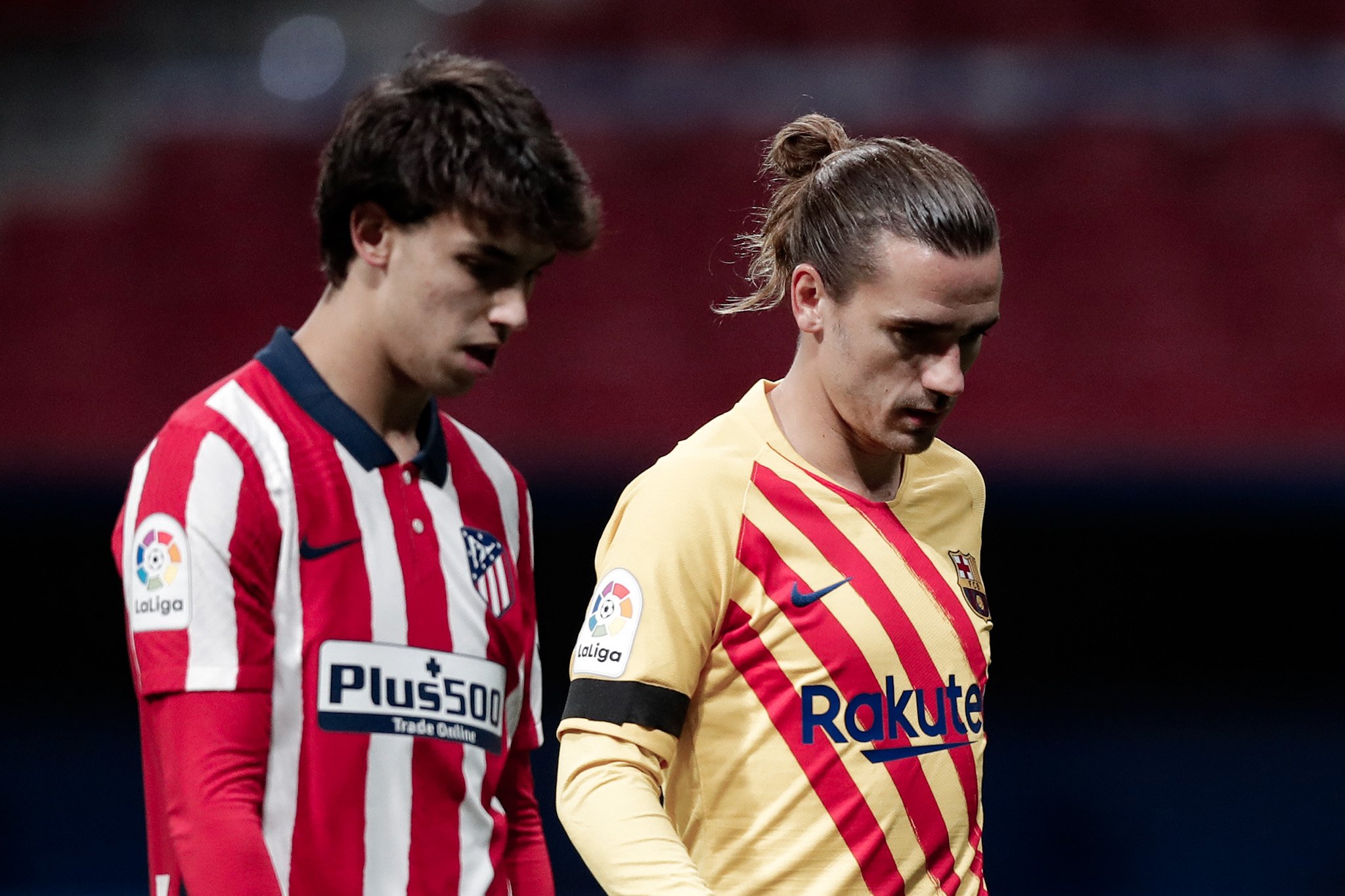 In collaboration with Anurag Agate.

A 1-0 loss to Atletico Madrid in La Liga left Barcelona reeling midtable. This was also the first time Diego Simeone’s side beat Barcelona in the La Liga. Coupled with crucial injuries to Gerard Pique and Sergi Roberto, Barcelona now face a dire path ahead of their UCL game against Dynamo Kyiv.

Ronald Koeman went in with his tried and tested 4-2-3-1 formation. Marc Andre Ter Stegen started in goal again. Gerard Pique and Clement Lenglet formed the centre back pairing, flanked by Jordi Alba and Sergi Roberto. In the absence of Sergio Busquets, Miralem Pjanic stepped up to form the double pivot with the ever-present Frenkie de Jong.

Pedri and Ousmane Dembele played on the flanks, with Lionel Messi in the hole and Antoine Griezmann upfront. However, as before, Messi and Griezmann had lots of interchanging positions. Pedri played more in the half-space in possession while Dembele stayed out wide. This often made the team structure a lop-sided 4-4-2. In defensive transitions, it was always a 4-4-2 with Griezmann dropping deeper to defend. Messi restricted his pressing to zones high up the pitch.

Frenkie de Jong had the freedom to push up high in the first half. However, the absence of Ansu Fati meant that the usual overload on the left side did not work in this game. Pedri had a poor game in general. Him moving far too infield to let Alba run down the left did not quite work – the passing was far too restricted by Atleti’s excellent defending. A second-half injury to Pique meant that de Jong had to play 35 minutes roughly as a centre back, which he did very well.

Atletico were missing some key personnel as well, most notably perhaps, Luis Suarez up top. They also missed a regular left-back Renan Lodi, and Hector Herrera and Lucas Torreira in midfield. They lined up in a highly asymmetric 4-4-2/5-3-2 structure and style.

The hybrid system was particularly evident in the different phases of the game. In attack, Hermoso would push out wide like a full back but stay in more defensive, withdrawn zones. Carrasco had the freedom to stay wide looking for overlapping runs to meet Felix’s clever passes. On the other side, Llorente would shift infield, allowing Trippier to bomb forward.

Felix himself overlapped down the left side several times, trying to create numeric overloads against Roberto and Pique, dragging Pjanic wide in the process. Carrasco’s and Felix’s overlaps on the left, coupled with Saul Niguez moving ball-near side and Correa dropping in to give options – this combination created quite a few problems in the first half. Here is an example – it led to Saul’s shot early on which was saved by ter Stegen.

The game was more or less evenly balanced – neither team were outright dominant than the other in any aspect. Here is the game data at a glance:

Barcelona enjoyed marginally more possession, marginally more shots and shots on target, and a better press than Atletico. Of course, the hosts had the all-deciding goal in their favour. Neither team generated high-quality shots overall, as the shot map and xG flowchart shows :

Barcelona’s possession superiority was pretty stale. Barcelona failed to dominate critical territorial zones, measured by field tilt – which is the percentage share of final third passes of each team. Even though Barcelona had higher field tilt, it was only marginal. What strikes out is that just the goal came when Barcelona were enjoying their best bit of territorial dominance.

Buildup to shots and goals

Next we take a look at some of the shots and the goal. Early on, Barcelona had the chance to score. Dembele burned his marker with pace and sent a cross into the box. It was met by a clever flick by Greizmann. The shot sailed high unfortunately.

Atleti had their chances on the other side as well. Soon after Saul saw his shot saved, the other flank created yet another moment of danger. A brilliant interchange of passing involving Correa and Trippier met Llorente’s clever run into the box. The shot crashed against the bar.

Towards the end of the first half, Barcelona could have scored again. There was a brilliant bit of buildup, a clever run by Griezmann to drag a defender, and then Messi ghosted blindside of the center mids to meet Alba’s nutmeg pass. The angle was too tight and Messi failed to score.

Soon after, Barcelona conceded the goal. Pique stepped up to intercept a long ball. Ideally, that should have been fine, except Pique miscontrolled the pass. That left almost everyone out of position. A simple ball over the top released Carrasco into oceans of space. But the maddening part perhaps was that ter Stegen left his box wildly to tackle the Belgian. He missed; Carrasco did not – he scored into an empty net from distance.

Atletico’s strength lies in engaging from wide areas. In this game, their biggest threats came again from the wide zones. Hermoso, Koke, Saul and Felix regularly released Carrasco and Trippier down the flanks. Trippier would often look for cutbacks or layoff into Llorente upfield.

Barcelona on the other hand tried to create from all possible zones. Frenkie de Jong managed to pull off a wonderful long pass into the box that Greizmann miscontrolled. Dembele single-handedly created chances from the right. The combinations of Alba and Messi created – in subdued amounts – danger from the other side.

For Barcelona, Messi, de Jong, Dembele and Alba were the bulk progressive passers. For Atleti, Koke, Trippier, Hermoso and Savic progressed the ball the most.

Both teams also tried to use width a lot. Surprisingly, Barcelona had more switches of play than Atleti, who have built their game to attack wider areas. For Barcelona, perhaps the reason for frequent switching was that they could not progress a lot directly.

The game data table posted above shows us that neither team pressed a lot. PPDA, which is a proxy for pressing intensity, was around 20 for both teams (low values of PPDA indicate high pressing). Here are the maps showing the defensive activities of both team:

Atleti forbade any progress down the centre. Upfield, they tried to press Pedri and Alba from creating too much danger. Deep in their half, they tried to force Dembele as wide as possible and tried to isolate him. Barcelona pressed all over the pitch in the middle-third. In deeper zones, they had to deal with the wide threats of Carrasco and Felix, and Llorente’s infield runs. The following plot also shows how Atleti forced passes wide and forced mistakes :

Two recurring issues troubled Barcelona yet again. The lack of chemistry and the lack of experience of the youth meant that certain runs went untracked. Atleti’s rapid front line dragged Barcelona into wrong zones, allowing trailing players to ghost into blindside runs. Saul and Llorente’s efforts at goal are perfect examples of this. In the first case, Pjanic was pulled in, leaving Saul free. In the second case, Pedri’s inexperience led to him losing his mark against Llorente completely.

Speed is always an issue that Barcelona has had trouble against. Llorente’s quick underlaps created quite a bit of trouble for Lenglet. Here is yet another example of a run – the pass from Llorente was thankfully cleared.

The goal was a combination of poor positioning and lack of speed, combined with some poor touch and terrible decision-making. Pique was out of position when he made the failed interception. No one in the team was speedy enough to catch up to Carrasco down the left. Ter Stegen should have communicated better with Lenglet and stayed in the box because Lenglet was haring down to secure the centre.

Issues have now been compounded with injuries to Pique and Roberto. If they face lengthy spells away from the pitch, Barcelona are stretched thin in the defence department. De Jong looks set to continue as a centre back for the next game at the very least and Sergino Dest will have to start. Barcelona faces extremely testing times ahead.