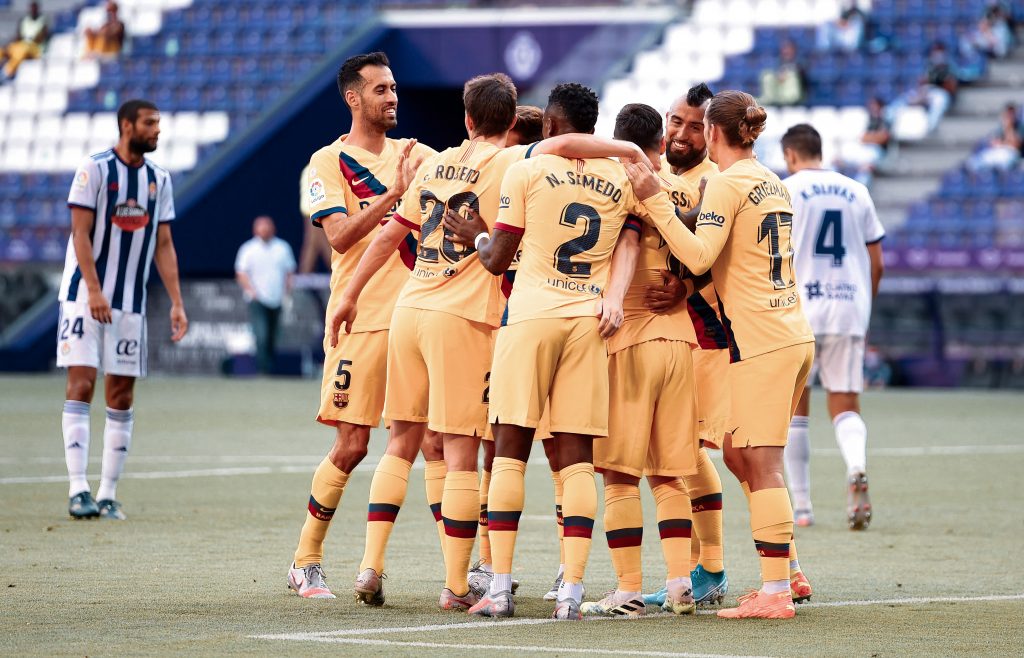 Real Madrid won the La Liga title last matchday, beating Villarreal with Barça further assisting them by losing to Osasuna. Now, the final matchday of the season is nothing but moot for the Catalans in terms of competition. But, there are a lot of things they have to change at least for the sake of the fans. Here’s the preview of the match between Deportivo Alavés and Barcelona.

The result of the title race has been lucid for some time now even before Real Madrid mathematically secured it in the last game. Barcelona’s inconsistent form since the restart gradually made them lose ground in the battle. Still, it was not over yet, and in football, there is always hope. But, the way Barça came out to play against Osasuna, on home turf, said it all.

The hosts, as usual, had the bulk of the possession doing the same predictable passing with Osasuna’s defence unaffected by it. The visitors had a medium block, waited patiently to strike on the break and in transitions. After the punishing goal from former Barça man Arnaiz, the hosts barely turned up with the dangerous chances coming only from Messi’s set-pieces. With everyone up the pitch, Osasuna countered in the closing minutes to kill off the game.

“You cannot convince me that the situation is disastrous. We deserved to win in many games that slipped out of our hand. We have to improve, but you have to notice the things that have changed”

The performance was unquestionably not the way to close off the last game in the Camp Nou in La Liga. The reaction of Messi after scoring the freekick said it all. But, right now, it is time to improve so Barça can be better when they face Napoli in the Champions League on August 8. Because like the captain said, if Barcelona play like this vs Napoli, there are little chances of going through, despite having the away goal.

Right now, the Catalans travel to Vitoria-Gasteiz to face relegation-safe Deportivo Alavés. Like Barcelona, they have nothing to play for after having secured their place in next season’s La Liga. With a win here, Barça can not only get back to winning ways but will have won three consecutive away games.

What to expect from Deportivo Alavés?

The hosts struggled for the most of the season in the bottom half dangling by the relegation zone. Their current manager Juan Ramón López Muñiz took over the reins only this month. The hosts were on disastrous form losing five consecutive games with the 6-0 thumping from Celta Vigo starting the streak. The new manager took over with a defeat to Champions elect Real Madrid(now) but confirmed their position with a draw and win.

It has only been a couple of weeks and three matchdays since the new gaffer took over. So, it is hard to predict how the team plays. Alavés have been lining up in a 4–4–2 formation in the three games Muñiz has managed with two strikers upfront. Joselu and Lucas Pérez are generally the two, with each capable to troubling the backline.

Barça could also see a familiar face in Aleix Vidal who was at the Camp Nou for a couple of years before moving away. The hosts have a few injury setbacks with Rubén Duarte, Fernando Pacheco confirmed out and Ximo Navarro doubtful. Rodrigo Ely serves his ban after getting a late red card vs Real Betis in the last matchday. They don’t have anything to play for in this game but would love to get one over a troubled Barça team.

From the start of the campaign, Barcelona were far from convincing. They have been shaky throughout the campaign and hardly showed any promise to retain the title once the season restarted. Barcelona’s problems range right from the board, down to the players on the pitch. However, there is no point in blaming and pointing hands right now as the season is yet to complete with Champions League looming.

Ansu Fati, Riqui Puig and Ronald Araújo will play against Alavés and will not take part in Barça B’s play-offs for promotion to the Second Division | Photo by Jorge Guerrero / AFP via Getty Images

The Catalans are in dire need of a complete performance to raise the spirits ahead of the Napoli game. But, they are out of their depth in terms of personnel available for this game. Quique Setién, much to his displeasure, could not fill the squad list for the game with only 16 players making the travel sheet. Three first-team players, Gerard Piqué, Ivan Rakitić, and Junior Firpo, are out of the game due to accumulation of five yellow cards.

Arthur Melo once again joins the injury list alongside Dembélé, Umtiti and Griezmann. All these exclusions leave only 12 first team members alongside four youth players. Setién has only two outfield players to sub in during the game. With this thinned out squad, there are not many expectations for a spectacular performance, but a win would do so many favours.

• Barcelona have won their last 7 matches against Deportivo Alaves in all competitions.

• Barcelona have kept a clean sheet in their last 7 away matches against Deportivo Alaves in all competitions.

• Barcelona are undefeated in their last 5 away matches (LaLiga).

• Deportivo Alaves have failed to score in their last 3 home matches (LaLiga).

The result of this game matters very little to the overall scheme of things. Neither team requires a result here to make a significant change to their current situation in the league. Both clubs will look forward to finishing their La Liga campaign on a high. The writer’s prediction for the game: 2–1 win for the Catalans.