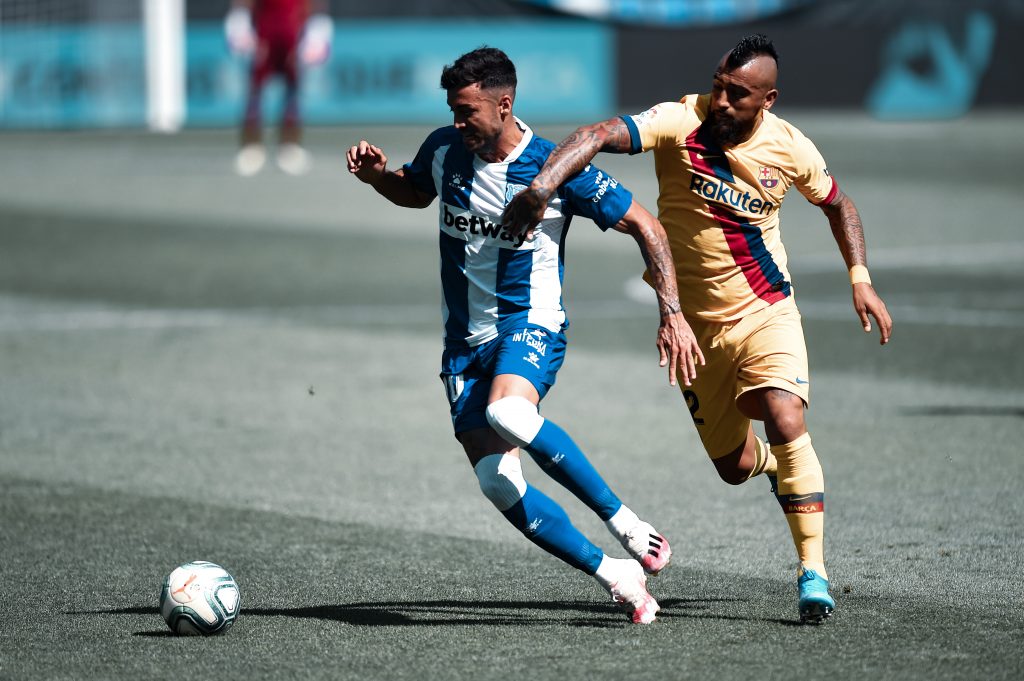 A thrilling game where every man in the blaugrana shirt showed his quality; these are the ratings for each Barcelona player in their 0–5 away win over Deportivo Alavés.

After a shocking defeat against Osasuna in midweek, Barcelona were able to cap off a less-than-convincing season with one of their displays of the season with a 0–5 win over Deportivo Alavés at the Estadio de Mendizorroza. This win served as nothing more than compensation as the league was done and dusted on matchday 37 as Real Madrid displaced Barcelona for the La Liga title.

The blaugranas were quick to put the hosts on the back foot as they hit the post thrice in the opening 15 minutes of the game. After this series of poor finishing, Ansu Fati opened the scoring through a Lionel Messi lobbed cross. The captain doubled the lead after 10 minutes, with Luis Suárez adding the third just before the halfway mark. Nélson Semedo came on and scored his first goal of the season as Messi put the game to bed with the fifth. Barca Universal takes the responsibility of rating those in the garnet and the blue.

Birthday boy Neto started in goal in place of Marc-André ter Stegen, who was rested to avoid fatigue. The Brazilian was completely untroubled in his box and had to make no saves. He did, however, complete 19 passes with the accuracy of 95%.

Starting on the right-back spot, all Sergi Roberto had to do yesterday was make timely runs on the right flank for overlap. He was heavily involved in the first goal, finding Messi inside the box, who went on to assist Ansu Fati for the first of the game. The Spanish international also did a stellar job in midfield after moving there when Clément Lenglet picked up an injury.

Araújo had a colossal job laid on his shoulders, replacing Gerard Piqué as the centre-back in the heart of the defence. He showed he could serve as an able deputy to the Barcelona number 3 and even take over the position in the future. The Uruguayan completed 4 out of 6 of his long passes, committed no fouls and lost the ball only four times – the least among starters. His best moment of the game came when he sprinted back 40 yards to dispossess Alavés striker Joselu.

Lenglet was given the responsibility of marshalling the defence in the absence of Piqué, and delivered quite seamlessly. There was no threat to the Barca backline for the 50 minutes he was on the pitch. He was then subbed off for Nélson Semedo after picking up a knock, which may make him unavailable for one or two weeks but thankfully not for the Champions League.

“Lenglet had a discomfort and this is not a time to take risks. So, he got off the field”

Barcelona’s left-back Jordi Alba has returned to his world-class ways since football resumed. Yesterday was another example of why he’s still among the best in the continent. Messi played Alba through just before half time and the Spaniard delivered the most satisfying first-time cross you would ever see on a volley. His pass was served on a platter for Suárez, who could not help but head it home. He then added to his tally as he whipped in a delicious cross in the middle of the box which was tucked in by Messi. An inch-perfect display.

Arturo Vidal started the game on the right side of the midfield three but moved down the pitch to act as a makeshift centre-back after Lenglet was subbed off. In 45 odd minutes he played in midfield, Vidal struck the post once through a brilliant volley and was then denied by Roberto Jiménez after an acrobatic header. He did a commendable job while defending, though. Was calm, composed and nearly impossible to get past.

Sergio Busquets returned as the anchor in Barca’s trio replacing the suspended Iván Rakitić. He controlled the game’s tempo and was able to play through Alavés’ press with ease. He completed three quarters of his long balls, 3 out of 3 of his aerial duels and made an incredible block halting Luis Rioja in his tracks.

Another game, another masterclass from Riqui Puig, who seems to have become a mainstay in Quique Setién’s midfield. He ended the game with two assists, one for Messi and another one for Nélson Semedo. Apart from these two assists, Puig made four key passes and another goal creating chance.

“Ansu Fati, Araújo and Riqui Puig are the club’s future. They showed it today”

Quique Setién
after the win against Alavés

He also came incredibly close to registering his first goal of his senior career as he struck the post from thirty yards out with a stunning finesse shot. The youngster was also hard working in defence, and made two tackles, and committed three fouls. We can expect more of him in the Champions League.

Barcelona’s number 10 dropping 10s has become a casual affair and it happened again yesterday night. Lionel Messi hit the post early in the game with a solo curled effort that nicked the far post before going out. He then went on to assist the opener, his 21st assist of the season, making him the highest ever assist provider in a single season in the La Liga and the join highest in the top 5 leagues along with Thomas Müller, who set the record himself this season.

While this has by no means been Lionel Messi’s best goalscoring season, he continues to break records | Photo by Juan Manuel Serrano Arce via Getty Images

Messi also scored twice yesterday, the first of which was the result of a top-notch move which included a defence-splitting pass and a fake on the goalkeeper. His goals also sealed the Pichichi trophy for him – the 7th of his career, and the joint highest top-scoring seasons in the top 5 leagues – as many as Gerd Müller in the Bundesliga.

There is little explaining what Luis Suárez does in-game. The man misses the easiest of chances only to score some brilliant goals. Yesterday was more of the same as he initially hit a one-v-one right at the goalkeeper and then scored a sublime header as the second of the game. Suárez was also crucial in the fifth goal of the game as he dummied Jordi Alba’s cross which reached Lionel Messi.

Ansu Fati started the game on the left of Luis Suárez in the attacking trio and played 78 minutes before being subbed off for Martin Braithwaite just before the 80th-minute mark. During his time on the pitch, Fati scored the opener and then created two chances for his teammates, neither of which was finished. He did, however, did a stellar job in defence constantly shifting spots with Alba on the wing.