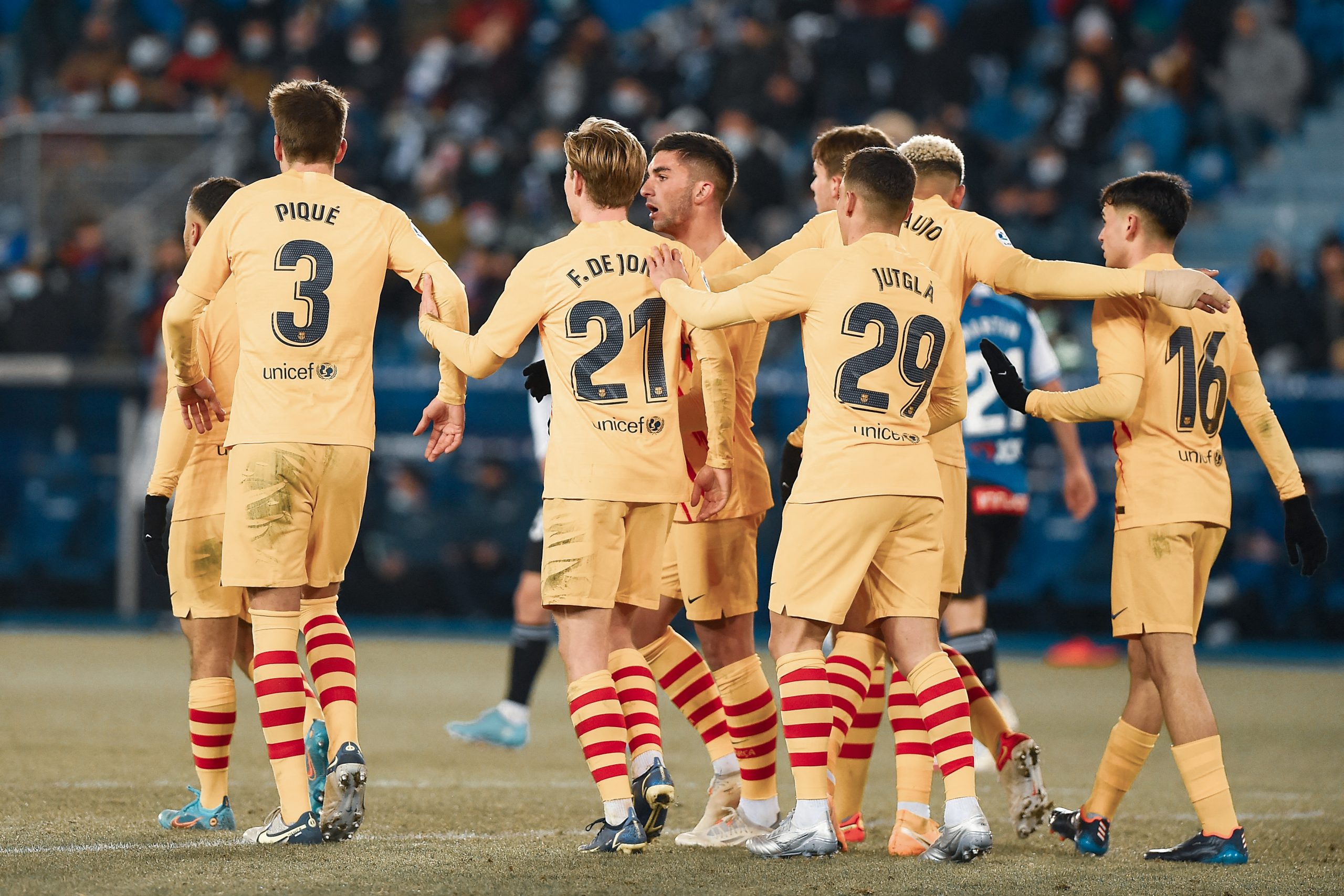 What Barcelona fans witnessed today was completely opposite of what they have gotten accustomed to over the last few years. Often, the team puts in a performance of a lifetime but walks away with zilch.

Today, however, as Deportivo Alaves hosted Barcelona, the visitors dropped inarguably their most passive display of the season. For 87 minutes, Murphy’s Law was in full flow for Barça in possession as everything that could go wrong did go wrong.

However, a moment of brilliance from Jordi Alba, Ferran Torres, and Frenkie de Jong steered Barcelona’s titanic away from the iceberg. After no wins in three straight games, you have to be happy with a win, even if it comes like this.

ter Stegen did not a put a foot wrong through the 90 minutes today, but honestly did not have an awful lot to do with his hands. He was involved in the buildup and was an outlet to relieve pressure from the backline, though.

Starting his first game in over a month, Dest visibly lacked match sharpness. He was positionally very poor in the first half, but improved in the second, putting in a few dangerous crosses. Has to improve if he wants any shot of cutting into Xavi’s XI.

Another day, another solid performance from Gerard Pique. The Spaniard was flawless defensively, making a bunch of critical clearances. Further, with Alaves defending quite wide, his long passing was called into action multiple times, and he delivered. Luis Rioja had no chance against Geri.

With Rioja on the left-flank for Alaves, Araujo had little to no danger to deal with. He came face to face with Jason twice and dealt with him effortlessly.

Martin Aguirregabiria and Gonzalo Escalante combined forces to keep Alba quiet for most of the game, but the Spaniard came through with genius at the very end with a lobbed through ball with his right foot that helped Ferran Torres set up the winner.

What to even say about Pedri? The kid runs Barcelona like a seasoned veteran. And with nearly 100 games under his senior belt already, maybe he is.

Every single move from those in Senyera went through the Spaniard as he racked up a mammoth six key passes, including one big chance created. This is his team for the taking.

Another solid night for Busquets, who has, contrary to what Twitter thinks, really stepped up since Xavi arrived. While he did not, surprisingly enough, create any chance today, Busi was a mountain to deal with at the back. Made three ditch challenges stopping counter-attacks, and ended the game with 6/6 ground duels won.

Xavi has asked Frenkie de Jong to make more late runs into the box, take advantage of his body to dribble into space, and not to go so deep to receive the ball.

A near-perfect night for every player that is usually targetted by trolls disguised as fans, including the eventual match-winner, Frenkie de Jong. The Dutchman struggled through the game but set up a couple of solid chances in the second half. And huge props for that run that won Barça the game, Xavi asked, and he delivered.

This would have been a night to forget for any other player, but for someone who offers relentless offensive movement like Torres, the game goes on till the last minute.

The 21-year-old made superb runs through the game, and one eventually paid off as Alba found him inside the box. Smartly, he did not try to go for goal himself and squares it to de Jong, who could not miss.

The goalscoring streak comes to an end for Luuk, but his physical presence was immensely helpful in an around the box. The Dutchman is a tough one to mark and did his best to create space for other attackers.

Inarguably the worst game in a Barcelona shirt for Abde, who was asked to switch wings in an attempt to bring the best out of him. Made poor decisions throughout the game, and gave away three cheap free-kicks.

Nico was brought on with 20 minutes on the clock but probably did add the offensive presence Xavi wanted. Ended the game with 100% passing accuracy; that’s always satisfying.

Came on too late did not get a chance to influence the game properly.

Came on at the very last minute to add defensive depth; did not get to touch the ball.