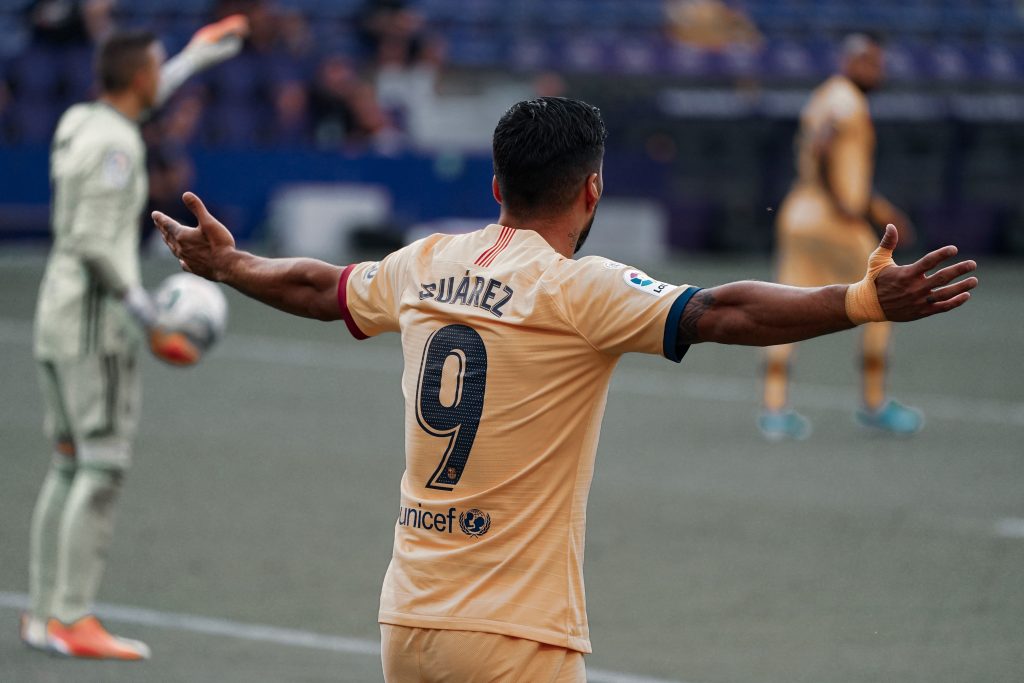 Following an unimpressive 0–1 away win at the José Zorrilla, our editors share their takes and standout performances from the Barcelona victory over Real Valladolid.

To the dissatisfaction of fans, Barcelona managed the second 1–0 win in a row on Saturday. While in the La Liga title race it is crucial to keep achieving all three points, culés were possibly expecting more goals and better performances both against Espanyol and Real Valladolid. Yesterday at the Estadio José Zorrilla, Barça dominated in the first half, but their rhythm dropped after the break. After very mixed, and even somewhat negative, feelings from such game, our editors share their opinions and standout performers from the latest encounter.

Barcelona continue their lonely march in La Liga. With the race for the title all but over, the Catalans continue to conjure up wins for a lost cause. After a rather disappointing display against Espanyol, the game looked better against Valladolid for a considerable while. The team controlled the tempo of the game, comfortable kept possession while at the same time keeping serge Guardiola at bay. The first half of the game was exceptional in the attacking sense. The fullbacks functioned as advanced wingers and Roberto helped carry the ball from the backline to the forwards. Barcelona created numerous clear scoring chances that on any other day would have been converted. The substitutions in the second half changed the game completely, however. After Riqui Puig was taken off, the midfield didn’t look the same. Barcelona were lucky to get away with the win, to say the least.

The German wall once again kept a clean sheet, for the second row in the game. It isn’t just the statistic that made him the best player on the field though. Along with Gerard Pique, he was the only other reason Barcelona came home with 3 points. He completed the game with a staggering 4 saves, 3 of which were from inside the box! His quick reflexes and impeccable positioning are responsible for the Blaugrana’s still being in the title race, at least mathematically.

The only positive, the 3 points

Barcelona put in a performance which was not at all suitable for a team challenging for the La Liga title. In the second half, Valladolid were much superior and could have very possibly scored. Though Quique Setién isn’t in the best of positions to start with considering the ageing squad and he problematic board, his substitutions have been a bit concerning as well. Not only in this match, but in a previous few as well.

Shifting from a back three to a back four and back again is not a good sign from the manager. Apart from this, Sergio Busquets’ and Riqui Puig‘s substitutions were not completely justified when removing those two would take away a bit of dynamism and a bit of stability from the midfield.

Even though in the end it was a victory, the three points don’t really feel remotely close to fulfilling. The performance by both the team and the manager left much to be desired.

The second half of the Valladolid match had Barcelona on the back foot most of the time. With Riqui Puig and Busquets subbed off, it became tougher to keep possession under Valladolid’s high-pressing system. Barça could have easily conceded in this process. However, one of the main reasons the lead wasn’t lost was Gerard Piqué.

He was a rock in defence. His 11 clearances, two interceptions and 100% aerial duels won show just how good he was. Along with this, like a Barcelona defender, he was always involved in the build-up. With a 96.7% passing accuracy, 87 accurate passes and 7 successful long balls he barely made a mistake in regards to the build-up as well as in defending. Along with Marc-André ter Stegen and Sergi Roberto, Piqué’s performance was the one which stood out the most.

A tale of two halves

Quique Setién deceived a lot of viewers when he named his line-up. It looked like a 4–3–1–2 with Lionel Messi and Antoine Griezmann leading the line with Riqui Puig behind them. Spoiler alert: it was not. Setién went back to his first game at Barcelona as they lined up in an asymmetrical 3–5–2 with Sergi Roberto and Nélson Semedo constantly interchanging to provide width. And it worked brilliantly as well. Barça could have been 3–0 up in the first half itself if not for poor finishing.

Setién was forced into removing Antoine Griezmann for Luis Suárez as soon as the second half began and it all went downhill from here. Barça went stagnant in midfield and the transitions slowed down immensely. The team looked lethargic and exhausted, including the captain. Not taking the chances in the first half came back to haunt the team as they were saved by the heroics of the defence. Setién needs to work on his substitutions and try to force the team to build-up pace in the final third. And it will not happen with Luis Suárez in the mix.

The team seems to have come down to the individual performances of Lionel Messi, Gerard Piqué and Marc-André ter Stegen to rescue them each game. However, things have shifted slightly since football resumed. Sergi Roberto has come forward again as a key member of the team, playing across multiple positions as he so often does.

He started as a centre-back but continued to push forward to add the extra bit of width. Then he shifted to central midfield and then to wingback and continued to build on his immense display. An all round near-perfect display from the Spanish international.

It was, again, a tale of two halves. When Barcelona played in the first half, it looked as if the game was going to be bright and energetic. The players combined really well and got their goal through a clinical finish by Arturo Vidal. But the tempo did not last. In the second half, it was Real Vallodolid who took the game to Barcelona. Only through brilliance on the part of Marc-André ter Stegen and Gerard Piqué did the team keep the narrow lead till the end.

The substitutes possibly didn’t have the impact Quique Setién was wishing | Photo by Irina R. H / Zuma via Imago

Valladolid looked very dangerous, and with a bit more of quality in the finishing, they could easily have put the sword through Barça’s throat. It was clear that the squad is exhausted and that the players, especially Lionel Messi, need rest. But it must be noted that the system Quique Setién employed in the first half seemed to work very well, and that the midfield was performing well until Riqui Puig was subbed off. The experimental substitutions on the other hand did not work and have given Setién something to think about.

Another day, another colossal performance by the Spanish centre-half. Always in the right position, Gerard Piqué cut off any attacks that the Pucelanos attempted. He cut down the lanes well, and ensured that the opposition couldn’t convert any dangerous crosses.

Despite his age, Piqué remains essential to Barça and this match reflects the same. His experience certainly came in hand as his brilliant display led the blaugranas to another clean sheet away from home. Marc-André ter Stegen does deserve a mention though, with respects to his antics in the later part of the second half.