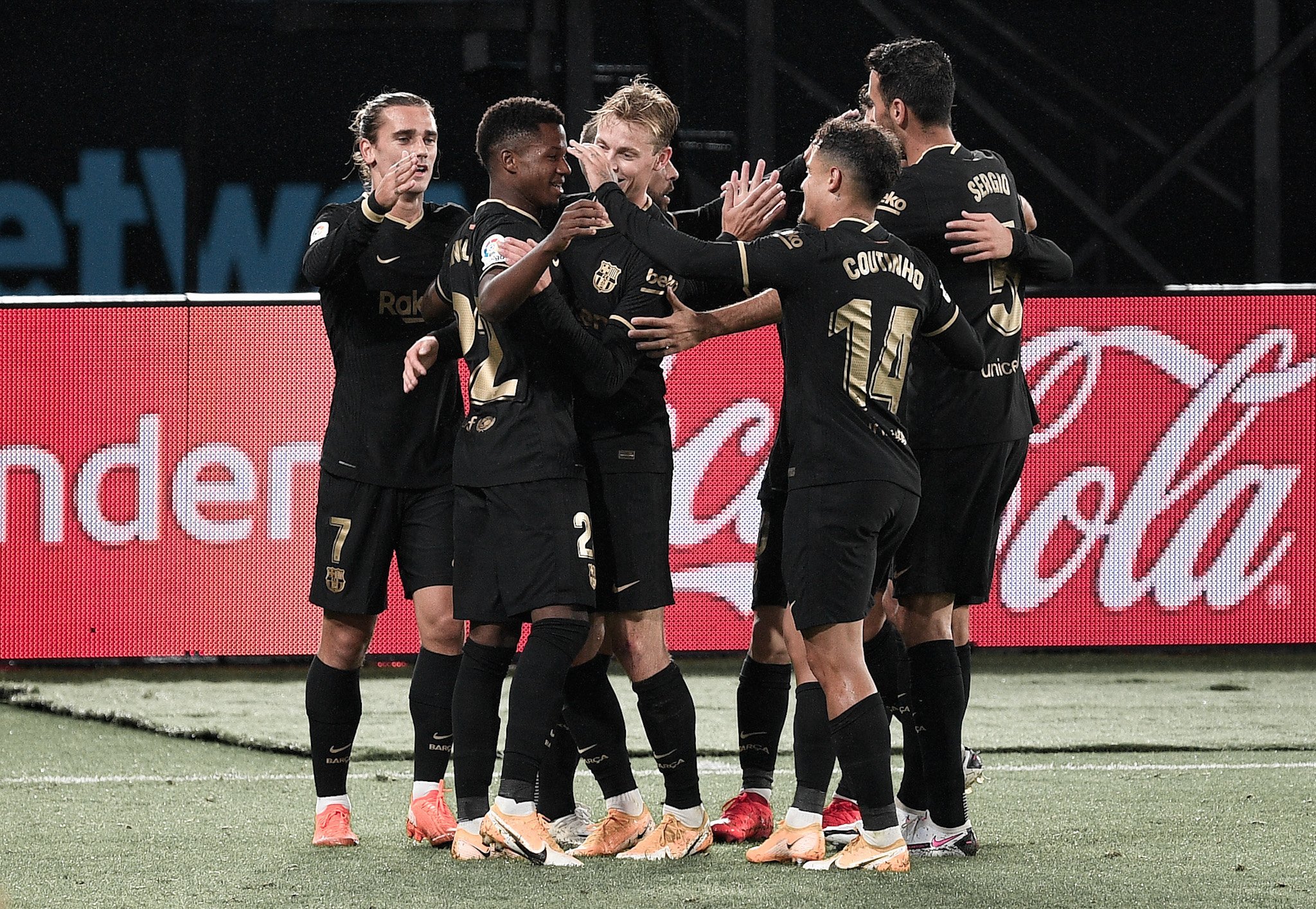 Barcelona managed to finally break the curse that lasted for 6 games at Estadio de Balaídos. Koeman’s team managed to get a comfortable win, a very impressive victory considering the fact that Barça played the entire second half with 10-men.

The tenacious performance that broke the curse
by Adithya Eshwarla

The Balaidos curse breaks! After 5 long years without tasting victory, Barcelona dominated the Galician stadium in grand style. A gargantuan victory for Ronald Koeman and his team. Every piece in the system clicked phenomenally, and it looks to be the start of something good. A tough first half that saw Lenglet being questionably sent off still boasted of much-attacking play by the Catalans. Ansu Fati can just not stop scoring, Coutinho weaving his magic once again, a determined Jordi Alba, what more can cules ask for. But it was the fight in the second half that announced the return of Barcelona to the world. Despite being a man down, the team dominated the game in every aspect. Koeman’s practical and timely substitutions were a whiff of fresh air. All in all, a massive boost ahead of the game against Sevilla.

Player of the game: Phillipe Coutinho

He was the man to look out for ahead of this clash, and he did deliver in grand style. The Brazilian has well and truly been reborn under Koeman, with a defined role in the system. Coutinho linked the midfield with the attack, but that was not all. His magical feet acted as a constant source of creativity, providing the assist to Ansu once again. He was unlucky not to get on the scoresheet himself with his shot hitting the woodwork. An in-form Coutinho has so much to offer, one hopes he continues as he has started.

As a Barcelona fan, it is totally understandable if one approached the match last night with a lot of anxiety and trepidation. After all, Celta Vigo’s home stadium – the Estadio de Balaídos – has become something of a haunting ground as far as Barcelona is concerned. In their last six visits at this stadium to face the Galicians, they have not won a single match. They drew three and lost three, scoring nine goals and conceding a whopping fifteen in the process.

This wasn’t a comfortable win as the score line as well as many media outlets would tell you. However, it was a performance that the squad and its manager Ronald Koeman can be proud of.  There were several periods in the game last night where Barca could have been vulnerable and slipped. The most important one being the second yellow card and sending off of centre-back Clément Lenglet at the end of the first half, when they were ahead by a single goal. But thanks to the consistent pressing, effective transitions and quick exchange of the ball, Barca doubled the lead early in the second half, before winding the game up during injury time.

Lenglet’s red-card was potentially more dangerous as Barca’s cover at the centre back is quite thin. However, young defender Ronald Araújo put in another promising performance and helped steady the ship. And speaking of youngsters, one has to mention Ansu Fati. Fati has scored crucial opening goals for the team now in the first two games of the season – both of which were against solid sides.

The Brazilian seems to be enjoying his second chance at Barcelona. The play-maker role that Koeman has assigned to him has brought him back to life. In addition to his contribution in ball circulation and the key pass that led to the first goal last night, Coutinho also had two fantastic shots on goal, only to be stopped by the woodwork and the goalkeeper respectively.

Beyond the direct impact that an in-form Coutinho has on the pitch, his creativity also relieves Lionel Messi from having to drop deep into the midfield. This helps Messi to stay close to the final third of the pitch and pose a more serious threat to the opponents. The tandem between these two geniuses will therefore be something to look forward to this season.

Ronald Koeman was already a legend at Camp Nou for his impressive stint as a defender at Barça, but his managerial career at Barcelona might be as good as his time as a player. His team is playing so well and brushing off the competition like it’s nothing: First Villarreal, now Celta at Balaídos.

Beating Celta Vigo is always impressive, but shrugging off the curse? In that fashion too? What more could Culés ask from Koeman. The defence was rock-solid, the midfield well-balanced and the attack? Oh, the attack was explosive, brilliant or whatever adjective you want to use.

This was one of the most complete performances by a Barça side ever since the Enrique era or Valverde’s first season. It seems like the team finally learnt how to play with Messi rather than for Messi, and the future looks bright at Camp Nou. Sevilla, here we come!

Going down to ten men was never the ideal scenario at Balaídos. Celta’s new-found attacking prowess could’ve been more dangerous at times, and Barça came close to crack down under pressure on two or three occasions, which seems like nothing when you consider Barcelona’s relentless attacking intent.

Even with ten men, Koeman stayed bold and tried to attack, and it served him well. His subs were also spot-on as Pedro and Trincão are two great options to shrug off Celta’s tired defence. It was nice seeing a coach this attacking and positive sith his subs. Thank you, Ronald!