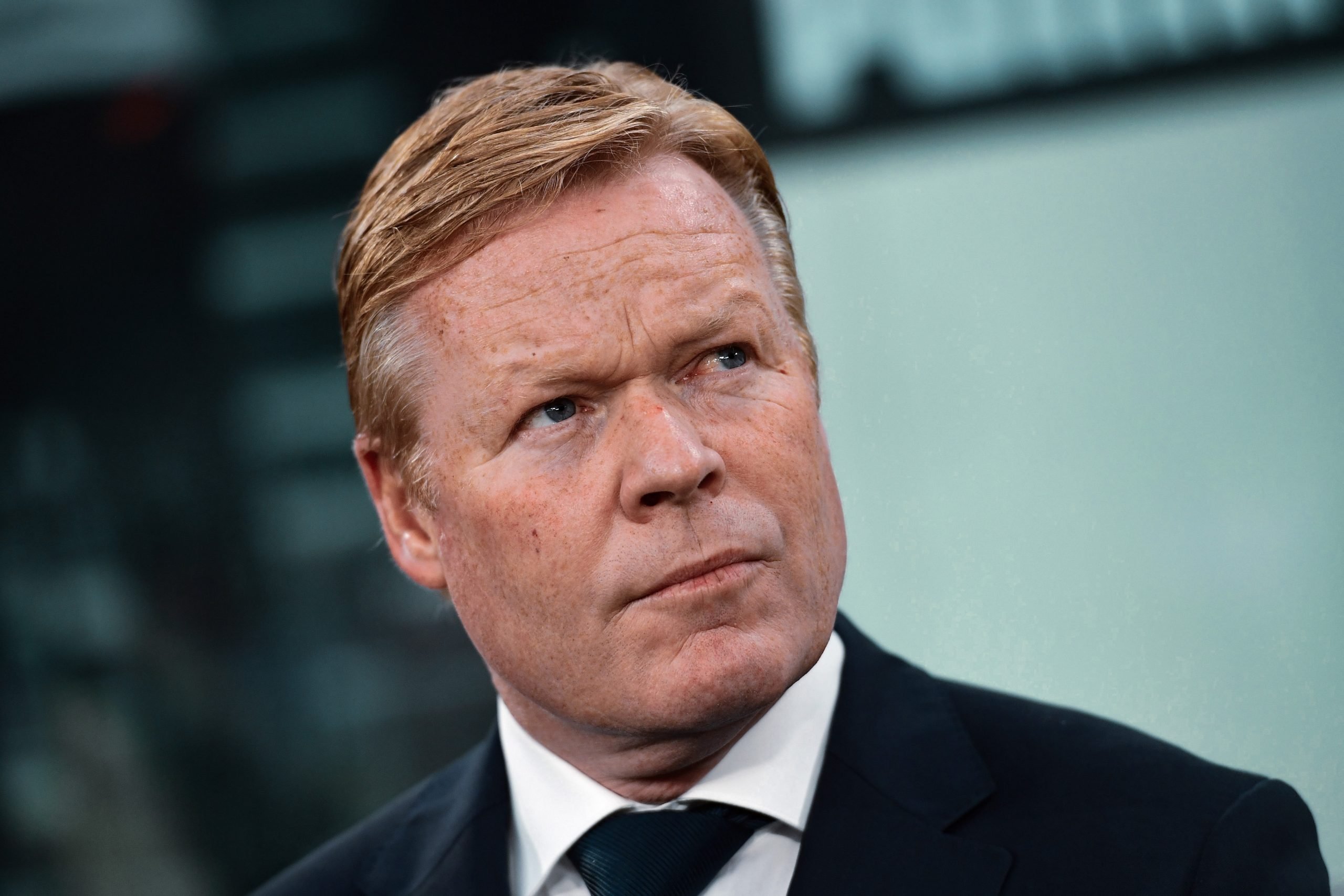 After Luis Enrique left back in 2017, Barça went through three seasons of tactical and cultural despair: neither Ernesto Valverde nor Quique Setién were able to bring back the Barcelona all culés know. With the last season of the Josep Maria Bartomeu management approaching to start, what will the Barça line-up actually be under the new Dutch manager Ronald Koeman?

Ronald Koeman‘s blaugrana era already began a couple of weeks ago, but since all the Lionel Messi fuss took approximately ten days to reach its ending, Barça’s world was pretty much occupied within those sort of boundaries. While the Argentinian took the frontline, as always, the Ciutat Esportiva Joan Gamper opened its doors to the first players attending preseason.

It was difficult to actually think about the needs of the team while its greatest legend could have left the club with a court sentence. But while the love for Barcelona finally – but not definitively – prevailed, the new Dutch manager was yet again changing its plan for the new season. Messi in, Messi out, Messi in. The captain, the best player on the roaster, the most important centrepiece around which build a team around, had to stay within the club. And the Barça line-up from Ronald Koeman was certainly going to benefit from the presence of the number ten.

But since Messi decided to stay, a natural question could come to your mind: does this decision affect the manager’s tactical plan for the upcoming season? Maybe, probably, but maybe not so much. There is always space for the greatest of them all. And since president Josep Maria Bartomeu promised to the new boss that he would have had Lionel Messi on the team, it will not be difficult for the same manager to consider a future with a player that, just a few days ago, seemed to belong away from Barcelona.

Despite Messi remains the centre of attention inside Barça’s tactical system, there are a lot more doubts regarding what the evolution from the previous coaching systems will be inside the Barcelona training grounds. It would be too naive from us to just get ahold of the club’s new coach nationality to realise that Barça will be playing under a 4–3–3 formation and with the same high volume of ball possession.

That being said, it will happen, though. The Dutchman will not contradict himself and will opt for an offensive, wide, yet more balanced tactical system for his new job. There wouldn’t be any sense in hearing the name of ‘Wijnaldum’ next to Barcelona’s otherwise. The Oranje international and current Liverpool player has been a Koeman’s pupil ever since the latter coached his national team. And with Liverpool’s extraordinary collective performances over the last couple of years, its pieces could not go unnoticed to the world’s observer. Especially to a selector as an international coach is.

More verticality will be synonymous to diagonally, though, differently from what we have seen during the latest Ernesto Valverde and Quique Setién eras. With the latter two, Barça’s playing style got a complete overhaul towards unnecessary, uncharacteristic levels. Valverde gave the club a sense of over humbleness that contradicted everything Barcelona stand for, while Setién’s mentality tried to exhaustingly reach a standard that he was never being able to actually reach. Under the line of the ball the first, excessive and boring keeping of the ball the latter. Nowhere to go. That will be something that Barcelona’s new manager will have to avoid, in favour of a wider and more vertical type of offensive play.

That is where Memphis Depay, former PSV and Manchester United footballer, currently based in Lyon, comes in place. The class ’94 Dutch player could come as a bargain in Catalan’s territory, as his contract is due to expire in less than twelve months time. Although starting from the left wing, the current Lyon player proved to have increased his scoring numbers consistently from the previous Manchester times.

Last season Depay was able to net 9 goals in the only 13 appearances he had with his club, due to his unfortunate injury to the knee ligament, plus another 6 in Champions League. But what mostly characterises Depay, and makes him the perfect candidate to substitute Luis Suárez in Koeman’s eyes, is perhaps the utility that he could give to the tactician’s ideas. While he would seem to get the spot of Ousmane Dembélé, his diagonals toward the centre of the last third of the pitch could be lethal with the likes of Messi, Antoine Griezmann, Philippe Coutinho and Ansu Fati buzzing around him.

All food for thought. But as the transfer reports get increasingly higher on the scale, we are all left in what can actually be Barça’s starting eleven this season. Because on paper, the Catalan’s team is as good as ever – apart from the golden 2009–2011 period. The backbone of the squad, apart from the historic third top goalscorer of the club, Suárez, will all be there on their place. Maybe with a different role, but without too much discontinuity whatsoever.

With Miralem Pjanić‘s signing, the only senior figure in the roaster which could have fewer minutes on his back seems likely to be Sergio Busquets. Barça’s beloved pivot, its most underrated player, yet probably the most important figure in the team regarding the equilibrium he gives to the game, could see his minutes decrease, as Koeman’s idea to rejuvenate the current side could see its spark in that central position area where things are bound to get faster.

Calm reigns on Barça’s camp, apart from the two Dutch figures approached near the club’s name. Only time will tell if the Barcelona will go for more apparent superstars, or if the current new youngsters, such as Francisco Trincão and Pedri, will be enough in the board’s eyes to compete at the highest level this term. Difficult, but strength is in unity, not in names. So, let’s see what could the Barça line-up be with Ronald Koeman.

The Dutch mantra will hardly be broke, as the vintage 4–3–3 formation is the one highly anticipated within the Barça environment. And as Barcelona has not yet moved any pieces amongst its defensive chess, nor it seems to be bound to do in the near future as Eric Garcia will likely honour his last year of contract in Manchester and any Nélson Semedo off links seem distant to reach any practicality yet, the backline is the only certainty the culés can have.

Even if Ter Stegen will need to undergo a physical recovery from his surgery, he will still be Barça’s number one, in attendance to see whether the German goalkeeper will actually renew his contract or not. The defensive line will be, predictably, the same one we saw last season: Semedo, Gerard Piqué, Clément Lenglet and Jordi Alba. Even though Barça wants to accelerate its rebuilding, Piqué and Lenglet, together with Alba, will most likely defend the team’s goal yet again.

As we go up through the formation, we begin to hit our heads around some uncertainties. Dutch familiarity, youth or experience? With the likes of Ivan Rakitić and Arturo Vidal already gone or, in the case of the Chilean, on the sidelines, Koeman’s plan will eventually revolve around Frenkie de Jong mainly, accompanied by the likes of an eventual Georginio Wijnaldum, but also Pjanić, Riqui Puig and Busquets.

While De Jong seems the only certainty Barça currently has in its midfield, it will be interesting understanding whether the former Ajax midfielder will perform as a left central midfielder as he did last year, or, as the Dutch manager already alluded, he will see his position being adjusted in a central defensive midfielder position. Both are possible in a midfield composed by three or two players.

That will certainly see Barcelona having the option to choose whether to play under a 4–3–3 or perhaps a more offensive, yet balanced according to the player’s characteristics, 4–2–3–1. The addendum of Gini Wijnaldum and Riqui Puig would give the azulgrana midfield that dynamic movement and offensive insertions to cover the pitch from top to bottom.

Finally, Pjanić will likely be used as De Jong’s partner in a two-man midfield or as a central defensive midfielder in a three-man one, while Sergio Busquets will fight for his spot and gain some minutes with the undergoing of the season as a starting substitute, as heavily reported from Koeman’s surroundings. Yet, playing with or without the Spanish international will be a challenge for the Dutch manager.

At last, the offensive restyling will have its saying in the return of Philippe Coutinho from his loan at Bayern Munich, of Dembélé from his continuing injury spell, of Memphis Depay, eventually, and of the youth of a worldclass wonderkid, Ansu Fati. With Lionel Messi taken as granted in the starting eleven, it will certainly be interesting to see how Koeman’s promise to Griezmann of making him a central player in his project will be kept.

The only way for the French world champion to perform as he wishes would be through a 4–3–3 or a 4–2–3–1 as a central forward, no doubts around that. He was promised to not be played again on the wing, rightly so. But, while it seems practical in both cases, if Koeman keeps his word and Griezmann plays in a front three line-up for Barça, Messi would be moved to a right-wing position which, as the years go by, is slowly getting on his legs, day by day.

As the clock is ticking faster than ever for Messi – as his transfer request suggested even more –, his total involvement for the team would be through the middle, as his vision and creativity, despite a year of an unfortunate finishing, remain the best in the world. It will be the wingers and the offensive midfielders’ job in Coutinho, Dembélé, Trincão, Pedri and Depay to create that space and produce the right vertical and inner movements to facilitate Messi is providing and eventually finishing the job.

The doubts are still many, as we approach Barcelona’s first friendly of the season against Nàstic and the reinstating of Messi around the Ciutat Esportiva Joan Gamper, while also waiting for all the internationals to get back at the club’s headquarters. Koeman will have his fair of effort in trying to find the right line-up to get Barça, a roaster that was recently annihilated by Bayern Munich despite having world-class players on its sheet, on the right path.

The squad is already comprehensive of wonderful players, but the game is not played on sheets, but on the pitch. Only the right mix of dynamism, identity and solidity will give this club the strength to find its path to disguise, yet again, a season full of problems.