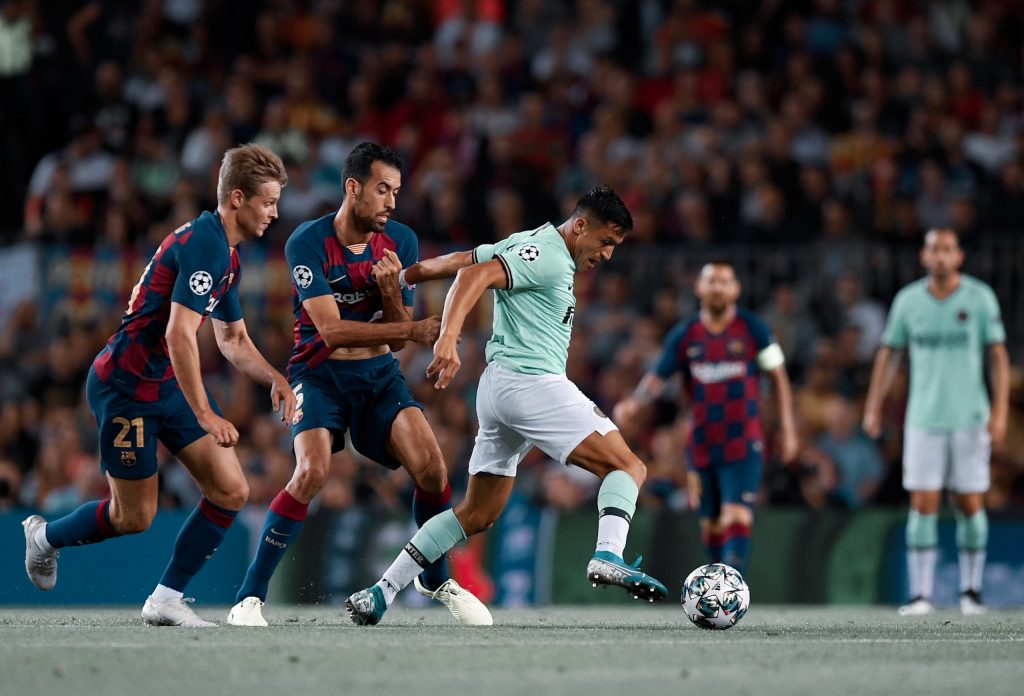 As Frenkie has had to switch from Ajax’s 4–2–3–1 to Barça’s 4–3–3, the question has been revolving around whether he should play as an interior or a pivot. And, crucially: can De Jong and Busquets play together?

The Barça midfield is where all the witchcraft and wizardry takes place. It is the department that makes Barcelona so distinctive and peculiar. However, in recent years, the creativity and innovation Barça’s midfield brought is simply disintegrating. While there are various reasons to this, the most prominent cause is the fact that the blaugranas are depending on two fairly defensive interiors. Arthur is certainly someone who has improved his attacking aspect, however, the Dutchman is evidently struggling to occupy his current role, considering it deprives him of the freedom he usually has at his disposal.

There is no denying that Busi is arguably one of the best players to orchestrate attacks. Him moving forward just to provide a helping hand has benefitted the cub various times this season already. Unfortunately, there’s one problem: De Jong becomes a hopeless case.

Frenkie, at Ajax, was a player who created the build ups, he worked from a defensive role and was the one who carried the ball to the interiors. Also, the moment he regained possession, he would generate a rapid attack. Basically, he fulfilled every task Sergio is currently handling. Unluckily, at the moment, he’s deprived of that liberty as he finds himself restricted and captivated as an interior. With him so clueless and lost in the center of the park, its only Arthur who can add that little sprinkle of creativity.

“The position he is playing now is different to the national team and Ajax. He’s learning to play further forward like this, it’s not all bad, but it’s not his best position. For me, I think he performs better playing deeper”

There was one stand out game for the Dutchman this season, which came against a brute Betis side. What was so remarkable about that particular performance was simply that De Jong understood what Busquets, infact the entire team, asked of him. He made a piercing run through a rigid Betis backline that allowed him to score, but what was so laudable about him was that he always looked for openings and never barged into anyone’s zones. He made darting runs forward and didn’t seem to collide with his Spanish partner in crime’s position too often. Such discipline and regulation on the field helped him thrive, but sharing a field with Busquets means those performances don’t come too often.

At the end of the day, its fair to assume that Busquets and De Jong playing together is not going to work for the club in the long term. Both individuals require certain privileges and it may not be wise to pair them up. In the Valverde era, Busquets’ role was quite unimportant as he sat incredibly deep, while Frenkie was the man who had the liberty to stamp his authority wherever he went. Although that still wasn’t enough to bring the best out of De Jong, with Setién, he’s even more confined and constricted since Busquets is given more authority.

While De Jong hasn’t necessarily been bad, he has failed to had the impact he had at Ajax | Photo by Alex Caparros via Getty Images

At this very moment, many would prefer to choose Busquets to be the regular pivot. He’s experienced, more reliable at the back and also, Quique seems to have a sweet spot for him. Even so, there is a way Frenkie can be somewhat more influential on the pitch. What the club must do is start natural wingers such as Fati or Braithwaite so that there is more flexibility and freedom in midfield. Congesting the center of the park will only work when there is the width on the flanks; this will automatically allow De Jong to be able to break the lines and play more naturally. Spectator have seen countless times that Fati operating on the left makes the former Ajax youngster a lot more comfortable on the field. Setién’s narrow 4–4–2 formation proved to be costly in the Clásico and, woefully, it seemed to affect De Jong the most. He simply lurked around the opponent’s box cluelessly, looking like nothing but a lost soul.

Despite playing in a post that seems quite unfamiliar, the 22-year-old has actually done a reasonable job. He’s still one of the best midfielders in the world and has the second most deep progressions after Messi. Of course, by no means does an advanced position bring the best out of Frenkie, however, it’s impressive to see his ability to adapt to foreign surroundings. Nonetheless, if the club truly intends to make the most of this prodigy’s talents, he must gradually replace the veteran currently occupying the single-pivot position. With De Jong’s energetic pair of feet and defensive superiority, he will undoubtedly surpass his mentor in due time. For now, given Setién’s limited options, featuring both these players together is possible, but it should only be a temporary solution for this transitional phase.

Frenkie de Jong: Talent, Hunger, Character
What did you think of this article?