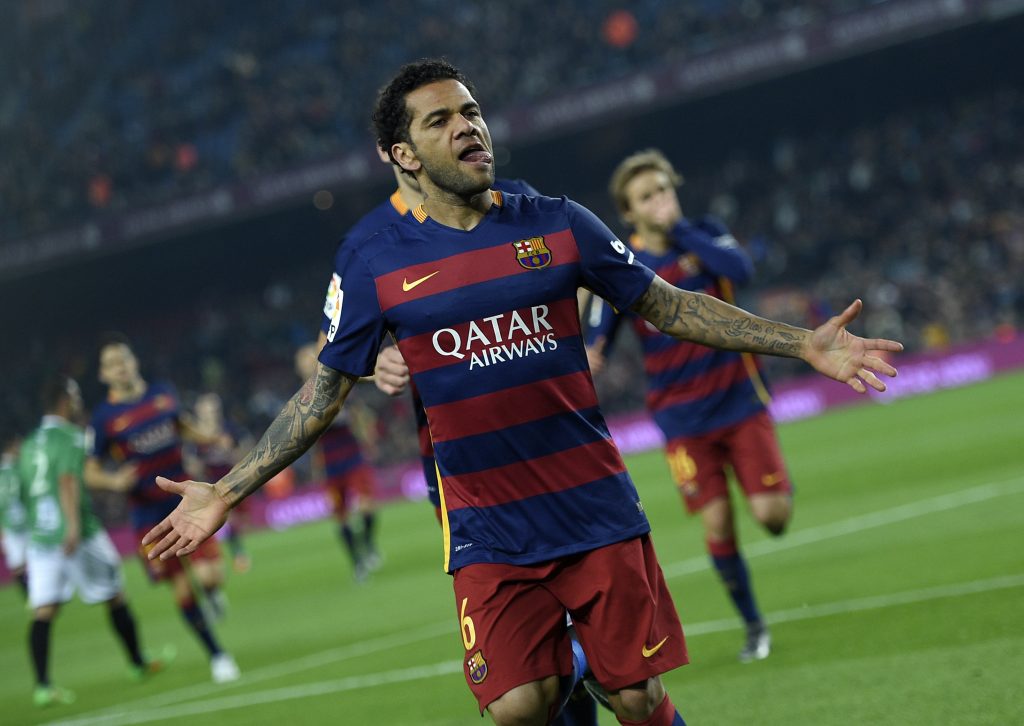 As it is often said, you don’t know what you have until it’s gone. Since he departed in 2016, Barcelona have struggled to fill the void left by Dani Alves, the greatest right-back in the history of the club, and arguably of football too.

In football today, there’s a scarcity of mesmerising players, let alone full-backs. Let’s look back at one of the most captivating players ever. A historic player who completely elevated his role, and a player whose departure left a deep void in Barcelona. It is time to review, analyse and adore Dani Alves. Not only the greatest right-back in the history of football, but also the most decorated.

Dani was different. He was a natural at football, and yet the things he did on the pitch were unnatural. His flair on the ball, his ability to make unfathomable passes with a ball, to singlehandedly occupy the entire defence, was unheard of. He was a genius. A mad genius, one who would not make you go, ‘Wow!’, but ‘How?’. Alves was so free on the ball, football came to him effortlessly. He was destined to go down in history as the greatest to ever do it.

Alves had unreal numbers at Barcelona. Throughout his blaugrana career, he accumulated a total of 103 assists and 21 goals as a full-back. To put that into context, Barça’s two current right-backs, Nélson Semedo and Sergi Roberto, have collectively gathered 44 assists in 383 combined games. Alves was much more than numbers, though. His creativity was beyond anything that could be calculated. He was a master of all trades. The fact that his imagination and physics-defying passes can be vividly recalled, even while he was playing in a team with probably the greatest passers of a ball in history in Lionel Messi, Xavi Hernández and Andrés Iniesta, is a testament to his genius.

A factor that separates great footballers from legendary footballers is consistency. Not only was Alves insanely consistent throughout his career, but he also showed up during the big games. For instance, in the culés‘ 3–1 win against Juventus in the 2014/15 UEFA Champions League final, he had 2 key passes, 5 tackles, 3 clearances, 2 interceptions and an 87% passing accuracy. These high-level performances were recurring throughout Alves’ spell at Barcelona.

That said, the most magisterial thing about Dani was his telepathic link with Lionel Messi. Alves held the record – until Luis Suárez broke it last season –, for the most number of league assists made to the number 10. He assisted the Argentinian an astounding 26 times.

When we retire, people will ask: ‘Who was the greatest?’ Messi. ‘And who gave him the passes?’

Alves’ understanding with Leo went far beyond the numbers. They shared a deeper connection, an even greater connection. Messi knew where Alves was on the pitch at all times, and Alves knew where Messi was. They knew what the other was doing. Their link-up play and ability to read the other person’s game was a thing of beauty. An unprecedented supernatural partnership, that made them one of the most prolific and iconic duos to have ever existed.

Even though Alves’ best years are behind him, he is far from done. At 36 years of age he was named the Copa América 2019’s Player of the Tournament, where he lifted the trophy with his Brazilian brethren. Dani currently plays in the Brazilian league at São Paulo, where he operates as an attacking midfielder.

“Before I left, I made a final promise to the board at Barcelona. I said: ‘You are going to miss me'”

When he left, Alves warned the directives that they would miss him. And so they did. It is fairly obvious that neither Semedo nor Roberto have been able to make up for even 10% of the void Dani left behind when he walked out of the Camp Nou back in 2016.

He is the most decorated footballer in history with a jaw-dropping 43 total major trophies in football. He has made the FIFA Pro World XI a grand total of 8 times. A legendary footballer, who complimented his unnatural talent with an astonishing about of hard work that allowed him to make his dreams come true. Every year, the Brazilian papers report about a promising, young footballer, and label him the next Dani Alves. They just never seem to understand.

There is never going to be another Dani Alves.