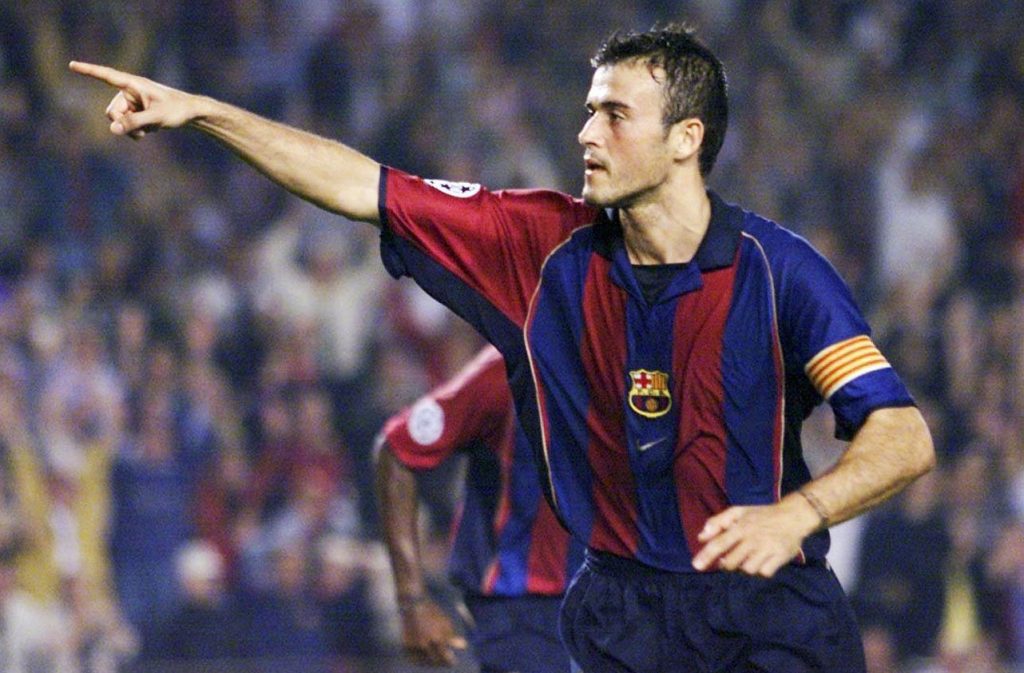 His imprint as a coach is indelible, but as a footballer, Luis Enrique wasn’t any less memorable. Born in 1970, he began playing in his local Sporting Gijón, before, in 1991, the 21-year-old made the leap to Spanish giants…Real Madrid.

In his first years at the Bernabéu, he was deployed in unusual positions, like full-back or interior, and was too locked by defensive tasks. Still, in 1992 he was called up for the Olympics in Barcelona, helping Spain win the gold medal.

In 1994 he took part in the World Cup in the USA. In the quarter-final loss against Italy, he was elbowed in the face by Tassotti, who remained unpunished during the match. Lucho suffered a broken nose, and his blood, tears, and rage symbolized what the player was.

At Madrid, with manager Jorge Valdano Luis enjoyed one of his best campaigns in the capital. He played from the right-wing and scored once in a 5–0 home victory over Barça, as the merengues ended up winning that 94/95 La Liga title. In the following season, Madrid was plunged into a crisis, which led to Enrique’s exit after not renewing his contract. Following 5 years with Los Blancos, his next destination was none other than Barcelona.

There he enjoying 8 magical and better years on an individual level. While his signing generated skepticism among culés at first, he instantly became very loved by fans thanks to his sacrifice and quality. And hated by Madridistas, of course. ❛ I rarely felt appreciated by the Real Madrid supporters and didn’t have good memories there. I think the blue and purple suit me much better ❜, Luis said.

While operating in a number of roles, he acted more as a goalscorer, exploiting his best virtues behind a striker, and netted 46 La Liga goals in his first three campaigns with the Blaugranas. In the 97/98 league-winning course, he scored one of the goals in a 3–2 win at the Bernabéu. To celebrate he ran like a madman and clenched his fists while being insulted and thrown objects by his former fans. But Lucho cared little. Luis Enrique retired at Barcelona in 2004, having become a fan favourite for his versatility, consistency, technique, and restless spirit.