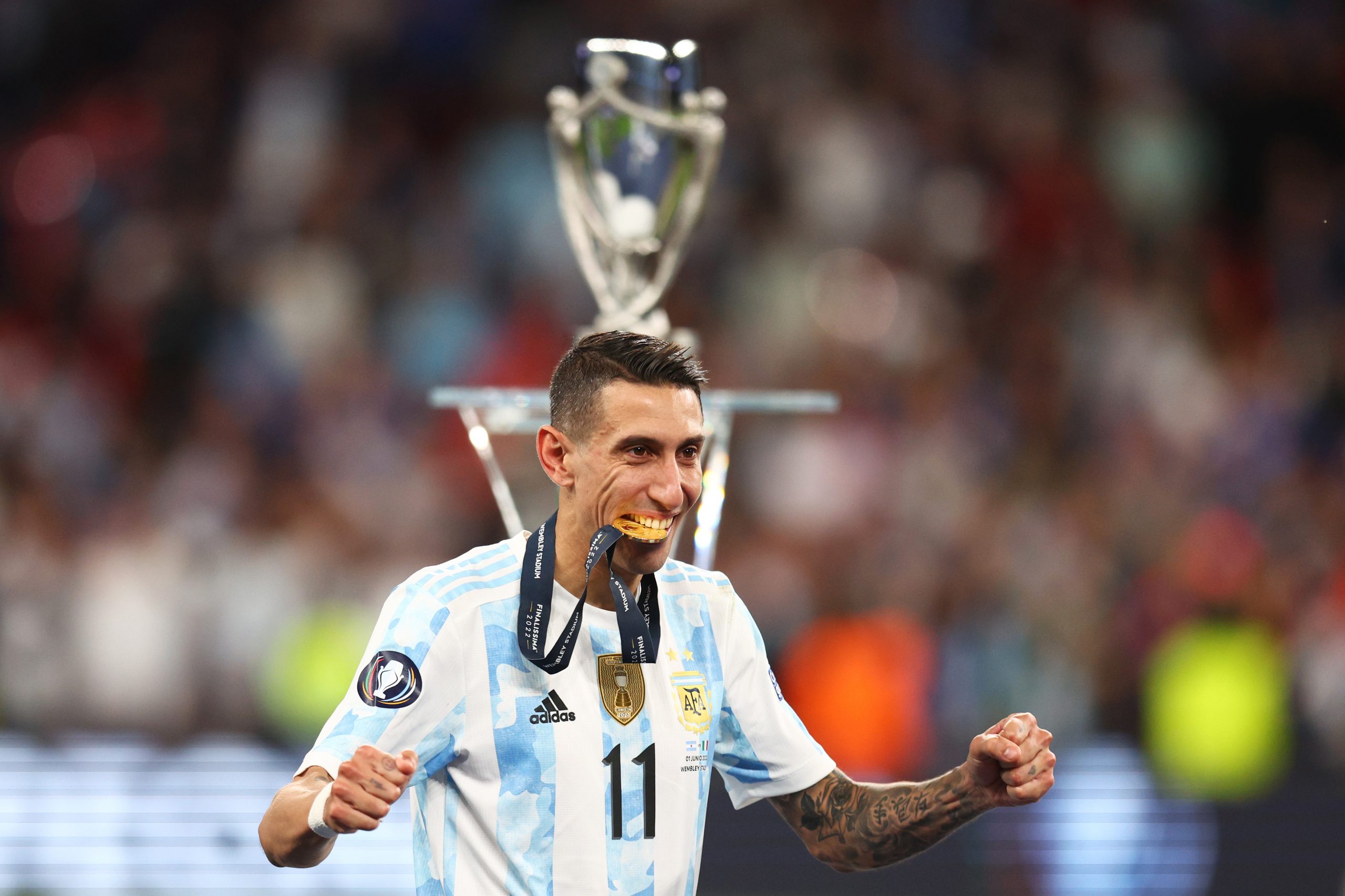 With Ousmane Dembele’s renewal looking improbable, Raphinha’s price tag outrageously out of reach, Ferran Torres still navigating his best position, and youngsters like Ez Abde and Alex Collado not yet ready to start, Barcelona are in dire need of a right-winger.

As a temporary stop-gap, Barcelona are reportedly considering a move for Angel Di Maria, whose contract with Paris Saint-Germain will expire this summer. Even at 34-years old, the Argentine still has plenty of tricks up his sleeve.

Is this a sensible transfer for the Catalans? Let’s take a look at the potential pros and cons of signing Di Maria.

Di Maria has been one of the greatest attackers of his generation; his silky-smooth dribbling, world-class vision, and deadly left-foot have made him a nightmare to defend against ever since he burst onto the scene with Benfica back in the late 2000s.

Di Maria played for Real Madrid from 2010 to 2014, which has some arguing about whether he would even want to sign for Barça. That aside, he had a successful spell with Los Blancos and was notably the Man of the Match in the 2014 Champions League Final.

He had one sub-par season with Manchester United in 2014-15, and has since been a key piece at PSG. The Argentine is the club’s all-time assist leader and finished his stint in the French capital with 119 goals and 93 assists in 295 appearances.

For Argentina, Di Maria has arguably been the National Team’s second-best performer this last decade, right behind Lionel Messi.

His reputation as a big-game player is backed by his recent goal against Italy in the Finalissima, not to mention the winner against Brazil in the Copa America final last summer.

For many, the outcome of the 2014 World Cup Final may have been different, too, had Di Maria received the opportunity to grace the pitch.

Suffice to say, Di Maria’s name carries a lot of weight in world football. Even now, at the tail-end of his career, seeing el Fideo on an opposition’s teamsheet is cause for concern.

His production may now only be in shorter bursts, but its more than present. If Barcelona are looking to establish more credibility and cachet in these trying times, a signing like Di Maria wouldn’t hurt.

Not to mention it would possibly antagonise Real Madrid, an opportunity Barcelona would not want to pass up on.

The gaping hole at right-wing

As aforementioned, Barcelona are struggling to find a right-winger for next season. Although Ferran Torres will likely play there for the majority of the time, a quality rotation piece is needed – even more so if injuries succumb to any of the front-line like it did last season.

Di Maria would provide the Catalans with the spark of creativity that Dembele brings, with more seasoned vision and experience. It goes without saying that he now lacks the speed of the Frenchman, however his ability to navigate tight spaces remains at an elite level.

According to Transfermarkt, 88% of Di Maria’s appearances last campaign came from the right-wing. That is where he is most comfortable, taking defenders on and cutting in from wide positions.

Still, the Argentine’s versatility can not be understated; his superb campaign with Madrid in 2013/14 was largely as a central midfielder to accomodate Gareth Bale. He has also, several times now, played as a left-winger and even as an attacking midfielder.

At Barcelona, Di Maria would more than suffice as a rotation piece at right-wing, and could even slot in on the left-wing or as an interior. Further, his work-rate is still solid, and he comes with a boatload of experience in European competitions and La Liga.

Di Maria finished the 2021/22 Ligue 1 campain with five goals and nine assists in 26 games, playing second fiddle to Lionel Messi; not bad at all for a 34-year-old.

A two-tone profile: Creating and running

Looking further into Di Maria’s profile, his attributes make him an ideal option for the Blaugrana. The 34-year-old is both a runner and creator, someone capable of getting on the end of passes and but even better at conjuring up said chances.

In Xavi’s line-breaking and vertical Barcelona, Di Maria would fit in perfectly, stylistically at least. He naturally establishes width and enjoys playing on the flanks, yet is deadly in the half-spaces, looking to send through-balls and crosses into the box.

Due to his versatile profile, the Argentine slots perfectly into a myriad of frontline combinations. He could create endless chances for a classic number 9 like Pierre-Emerick Aubameyang (or Robert Lewandowski), run into space created by Memphis Depay or Pedri, and shift between positions alongside versatile forwards like Ansu Fati and Ferran Torres.

Despite this versatility, one cause for concern arises when considering what Xavi wants in his wingers. Di Maria is comfortable playing out wide, yes, albeit he will naturally look to cut inside to cause damage – other than the occasional rabona. This means cutting inside to half-spaces already occupied by an inverted right-back or interior.

The solution here is to incorporate more variance and interchanging positions, something which Xavi has shown to implement a bit, particularly when looking at times when Dembele would switch in and out of wide positions with Sergiño Dest or Dani Alves.

Additionally, Di Maria has shown throughout his career to be capable of weaving in and out of positions, thus negating this concern.

Before making final judgments, it goes without saying that we need to look at the finances and timelines of such a deal. On the plus side, the 2021 Copa America Winner would be a free transfer, thus eliminating any sums of cash needed to pry him from Paris.

There have been conflicting reports stating that Di Maria could earn a measly €2-4 million or as high as €9 million per season if brought to the Camp Nou. If the Argentine accepts the former, there would be plenty of return on investment. If not, Barcelona would have to find another option.

In terms of contract length, el Fideo is reportedly keen on a one-year deal that will keep him playing at an elite level before the World Cup later this November. This timeline works for the club as well, who do not – and should not – want to be tied long-term to an ageing star.

In the end, the potential pros of signing Di Maria far outweigh the cons – of which there aren’t many.

Yes, there are concerns about his age and fit as a winger that Xavi prefers, however, he’s shown almost no signs of slowing down, and his positional versatility is world-class.

Furthermore, it would be a steal of a signing if Barcelona can lock him into the reported salary they are negotiating, or if not, just slightly more.

For now, we will wait and see if Angel Di Maria will wrap up his illustrious career at the Camp Nou.