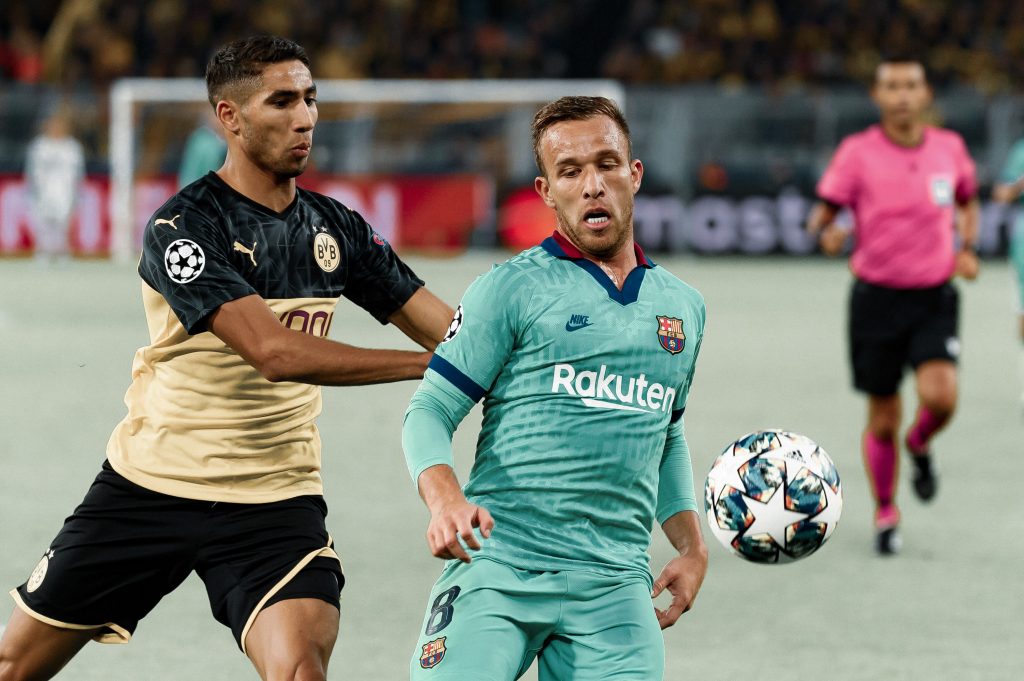 Barça and Real Madrid fans will always be inclined to compare the squads, form, performances, and transfers. The nature of the rivalry makes every single aspect of the game as a competitive stance by default. Currently, in addition to the nail-biting title race, there is one other situation that is ongoing and being heavily discussed. The exits of Arthur Melo and Achraf Hakimi have had both sets of fans in disappointment, but which club is dealing with it in a better way?

Barcelona announced on Monday the sale of Arthur Melo to Juventus, with Miralem Pjanić coming the other way once the season ends. Meanwhile, Real Madrid are expected to sell their young right-back and Borussia Dortmund loanee Achraf Hakimi to Inter Milan. But, in the middle of the tight title race for La Liga, who is dealing with such business in a better way?

Although the answer to that question is pretty clear, it’s essential to look at every nuance of the situations. The Catalans have already announced the departure of Arthur, while Madrid is yet to make Hakimi’s exit official. Nonetheless, Achraf is tipped to play for the nerazzurri next season, and a statement will be released soon. With both sides losing a player who could be a long-term solution to their respective club’s problems, let us now look at each stance individually.

Arthur Melo‘s departure to Juventus is arguably one of the most bizarre transfer dealings Barcelona have done lately. With Miralem Pjanić arriving at the Camp Nou in a swap deal, the fans are in shock. Swapping a 23-year-old for a 30-year-old is something unfathomable to the azulgrana loyalists.

The deal has been going on for the past three months. If you think about it deeply, you will realise that there have been numerous rumours over Arthur’s future throughout this season. The Spanish press has continually been publishing articles on Melo’s off-pitch issues and had also clawed into the fact that he wasn’t playing much. The likelihood of an inside source within the club providing news to the media is very high, as we have seen boards do this on numerous occasions to offload their players.

The sale of Arthur Melo has left most culés unhappy | Photo by Óscar J. Barroso / Zuma via Imago

The fact that the Brazilian never had a second thought on his future and was only thinking of succeeding at Barça adds more salt to the fans’ wounds. He kept saying that he wanted to stay and help the club win more trophies. But the hideous manner in which he was forced out is something that everybody finds hard to digest. Pjanić is obviously a good player, but the club is probably a year or two late in purchasing him. He is past his prime and is likely to serve the club for four years at max.

The past three months would have been massively stressful for Arthur and his closed ones. With unending speculations and an unwanted move that he was being pressurised into making, Melo must have understood the real nature of the board. He was made to feel unimportant, unworthy of staying, and unwelcomed by the hierarchy. Even the manager Quique Setién had no clarity over the entire situation. The fact that the board didn’t make its plans clear to the coach himself is an indication of how shallow and shortsighted the whole deal is.

In massive contrast to how Barça dealt with Arthur, Real Madrid were pretty silent about Achraf Hakimi. Until last week, there were hardly any credible rumours citing the Moroccan’s departure from the club. He has been excellent at Borrusia Dortmund and was expected to return to Madrid at the end of this season. Even his agent had earlier said that they weren’t considering anything aside from returning to Madrid.

But within a span of two to three days, the rumours of Inter’s interest came up, which were soon confirmed by tier 1 transfer sources like Fabrizio Romano. The entire process went smoothly, with continual updates. There were no contrasting drama updates in Achraf’s stance that were seen in Arthur’s case. Although the madridistas were excited and anticipative for Hakimi’s return to the Santiago Bernabéu next term, his premature exit hasn’t crushed their spirits entirely.

Indeed, many fans were disappointed that Los Blancos aren’t installing a buy-back clause in his contract, but they aren’t losing their minds over this deal. The truth is, Hakimi wanted the guarantee of being a permanent starter for Real Madrid if he returned. However, coach Zinedine Zidane appears to be pleased with right-back Dani Carvajal and is said to have denied Achraf of the main role.

While Real Madrid and Barça both lose two gems, the former have dealt with such transfer in a more sensible and silent way | Photo by Christopher Neundorf / Kirchner-Media via Imago

The 21-year-old naturally wanted a promise of being used more and didn’t want to play the second stint to Carvajal after the extraordinary season he had at Dortmund. Furthermore, he was used as a right wing-back by the German outfit, and so, there were still question marks over whether he’d excel in Madrid’s tactics. Joining Antonio Conte’s Inter is actually the perfect transfer for him as a player. After being acclimatised to a back three system where he was used as a wing-back under Lucien Favre, he would fit in Conte’s puzzle with ease.

Achraf’s move to Inter was his personal choice, and Madrid’s board complied to his wishes. They will be receiving a transfer fee worthy of his capacity. President Florentino Pérez will look to use the money efficiently in areas that they require. They might be able to entirely fund the move of Stade Rennais’ wonder kid Eduardo Camavinga using the money they get for Hakimi.

The comparison is clear: one player wanted to leave the club for a more guaranteed role, the other was forced out of the club. No Madrid fan would complain about Achrif Hakimi’s departure if they spent the money properly. By contrast, in Barça’s case, they already bought Miralem Pjanić, which hasn’t gone well with the majority of the fanbase. Arthur had a bright future at the Camp Nou that was taken away from him by a superficial board. Whereas Achraf made a decision for his own benefit by leaving Real before he could get the opportunity to succeed.

At the end of the day, how one player received continuous pressure from the board, the biased press, while the other player calmly got to a switch sums up how both clubs are run. Arthur’s departure has caused massive unrest within the fans who want the current regime to step down as soon as possible. Nonetheless, Madrid’s fans aren’t particularly disappointed with what’s going on. They are aware of the fact that an impatient player will come no good. All eyes will be on Dani Carvajal in the coming days to see if he justifies the manager’s preference.

Thus, one club managed to silently get its deal done. The other has taken the off-pitch distractions too seriously and began to lose focus on footballing matters. One might argue that Arthur is currently a player at Barça and Achraf is on loan from Madrid. But judging by how the board is, they would have pulled off some sort of dumbfoundedness even if the situations were reversed.

Culés should now try to move on and look ahead to the future. They should warm up to the signing of Pjanić and accept him as their footballer once the current campaign ends. Else, it would only cause more unnecessary problems for the manager, who is unfortunately powerless in this situation.