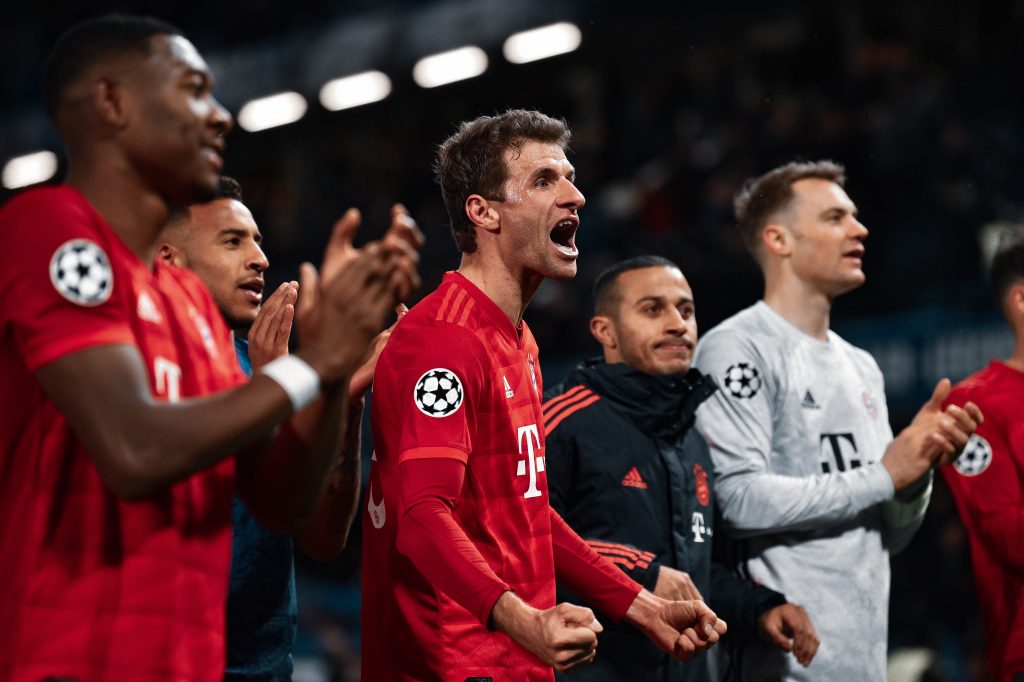 With the Bundesliga done and dusted in June, and the remaining top leagues also coming to a closure, all the attention turns towards the Champions League. The coveted European competition will be having a newly modified version of single knockout clashes starting from the quarter-finals. We now look at the German league champions Bayern Munich and see their prospects of going all the way in Europe.

Looking at this temporary and new format for the Champions League, we can infer that it is a disadvantage for the inferior clubs that favour the two-legged ties. However, irrespective of how the competition was panned out to proceed, the one club that will immediately be branded as the favourite is Bayern Munich. The German outfit is expected to go all the way every season. It is the squad depth and how the club is run in general that gives them a unique focus that puts them under the spotlight every year.

Having demolished the Bundesliga for the eighth year running, Hans-Dieter Flick’s Bayern Munich will be proud of the comeback they made to win the title. After sacking Niko Kovač midseason, the expectations were high on Flick to cover ground on the table. Nevertheless, the 55-year-old has done more than just turning the table around. He has also instantly established a definitive style of play, a refurbished attacking mindset, and a dominating philosophy.

It’s not just the comeback that is being spoken about, but also how they did it. After going through a 5–1 drubbing to Eintracht Frankfurt, which was the final nail in Kovač’s coffin, Flick, who was the assistant coach, had massive work ahead. The players weren’t really at their highest point of motivation and readiness to change the situation. Bayern’s disappointing start to the 2019/20 season saw them sit at fourth when Flick took over.

Hansi had to give the players the freedom to express themselves, and this came along with the fact that Niko was sacked after matchday 10. And this gave the new coach enough time to take control of the situation. The board’s farsightedness and instant proactivity has seen them maintain their title-winning streak. Fortunately, the players respected Flick’s capabilities. They were already aware of his abilities as he was already the club’s assistant coach.

In the remaining 24 games of the season, Bayern ran away with the league. Their ascent back to the top was slow but certain. They won 21, drew once, and lost twice in the Bundesliga under Flick. Having accumulated 64 out of a possible 72 points, there is no way anyone can deny the coach of the permanent long-term contract. Players like Robert Lewandowski and Thomas Müller flourished in Flick’s system. Furthermore, the entire team began to play with newfound confidence. In addition to the Bundesliga, the Bavarians also picked up the DFB-Pokal along the way, thereby completing the domestic double.

Bayern is very well on course to complete their quest for a treble. The form of several key players is highly encouraging, and the fact that each round is a single game knockout favours them massively. In the past, they have always gone out due to their inability to get the right result across both legs. Despite playing well, they were always edged out by not being able to focus throughout the tie.

But now, the temporary format helps them to brush the worries of the opposition making comebacks in the second-leg. They hold a 3–0 lead over Chelsea in the first leg of the round of 16. And so, their place in the quarter-final is pretty much booked, assuming they don’t have a meltdown in the second leg.

Flick did not change the shape of the team, as they continue to go with a 4–2–3–1. The alteration he made was in the aspect of pressing. Under Kovač, their forward pressing was restricted to an extent. They weren’t able to impose themselves into the game by allowing the opposition to have more time with the ball. Notwithstanding, Hansi noticed that the players were being held back, and gave them complete license to press heavily.

Furthermore, Müller’s career as a Bavarian seemed to be on its brink under the previous boss. He wasn’t able to fare well under Niko’s system, and as a consequence, saw a dip in form. His performances were nowhere near convincing for the fans to keep faith in him. But Flick restored confidence in the German veteran who is known as a Raumdeuter or “space exploiter”. His involvement increased the opportunities for Lewandowski to score.

The midfield double-pivot comprises of a combination of the brute of Leon Goretzka and the aesthetics of Joshua Kimmich. The former managed to bulk-up during the lockdown, and as a result, has become a great physical presence in the heart of the pitch. Kimmich, on the other hand, has begun to relish his role as a central midfielder. His ability to control the game and distribute the ball quickly to the pacy wide-men has been massively appreciated by many.

Robert Lewandowski and Lazio’s Ciro Immobile lead the European Golden Boot race with 34 goals each. Juventus’ Cristiano Ronaldo follows them with 31. There still are two games remaining in the Serie A | Photo by Imago

Indeed, there is no way one can ignore the development that Flick has done at the back. The introduction of Alphonso Davies at left-back has seen David Alaba shift as a centre-back. With the former grabbing the position by the scruff of its neck, Alaba has no other go but to continue in his new role. Both Davies and Alaba have relished with their responsibilities. The Canadian is Bayern’s breakout star who is amongst the most discussed talents across Europe. He announced himself to the world in the comprehensive performance against Chelsea at Stamford Bridge.

A high press that wins the ball quickly, to launch the pacy left-hand side of Davies and Coman, with Lewandowski waiting in the box. The tempo of the game is entirely under the Bavarians’ control. There is absolutely nothing any team could do when they went full throttle. Particularly since the restart, they’ve been solid in all departments. But if you have to trackback, Die Roten have won every single game since February 9th 2020. That is a total of 17 wins across all competitions.

The chances of Bayern Munich in the Champions League

As already stated, the entirety of Europe sees Bayern as the undisputed favourites. Indeed, there are a couple of teams like Juventus and Manchester City who come close in relation to squad quality. Notwithstanding, form-wise, the German side is out of this world. At this moment, no side has managed to find a way to break them down. Flick’s team has won every single game with complete control.

Unfortunately, they were handed with an injury blow. With Benjamin Pavard suffering an ankle injury in training, the likelihood of Kimmich going back to right-back is high. With the manager unlikely to rely on Álvaro Odriozola, who is on loan from Real Madrid, Joshua could be made to cover for Pavard’s absence. Truth being spoken, Kimmich has relished his role at midfield, and the team looks more imposing when he plays beside Goretzka.

“FC Bayern will have to do without Benjamin Pavard for the time being. The right-back of the German Rekordmeister had to break off team training on Sunday morning on account of an injury. A exhaustive examination by the medical department of FC Bayern diagnosed a ligament injury on his left tarsus”

The midfield battle seemed unwinnable whenever Kimmich was a part of the centre. So, teams could look to exploit the central portion of the pitch should Pavard not return on time for the knockout phase. Even so, despite this minor blip, there won’t be any changes in the German champions’ agenda. They will be hungry to win their first Champions League title since 2012/13, where they completed a continental treble under Jupp Heynckes.

The form, squad depth, quality across all departments, and ability to handle big games is something that must be appreciated without a doubt. A lion’s share of the credit should go to Hansi Flick for the work he has done so far. He is still yet to face a challenging tactical battle which is worthy enough to test his capabilities as a manager.

Bayern’s road to the final may not be the easiest. They will have to face the winner of the Barcelona vs Napoli in the quarter-final before facing one of Real Madrid, Manchester City, and Olympique Lyonnais in the semi-final. But considering how Bayern bulldozed past the closing stages of the domestic campaign, they will see themselves as favourites to go all the way and crown themselves as the Kings of Europe.