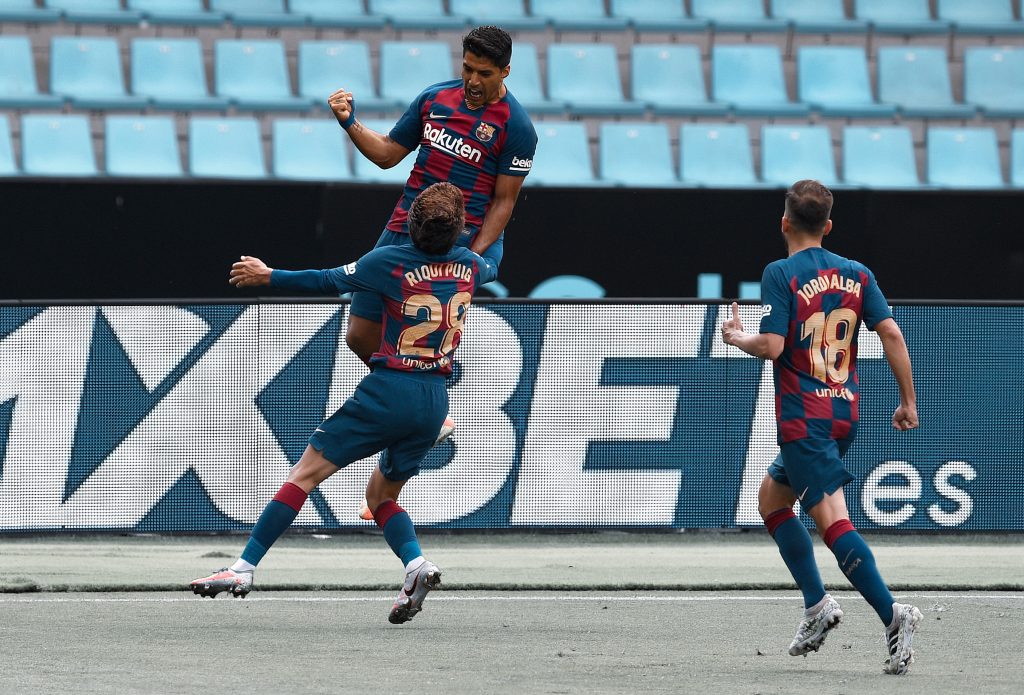 Some performed, others didn’t. These are the ratings from each Barcelona player in Saturday’s crucial draw against Celta de Vigo.

The curse continues. Barcelona once again fell prey to Celta de Vigo at the Balaídos, failing to seal a much-needed three points. While Barça have arguably displayed one of their best performances in the first half, lady luck simply refused to be on their side. What seemed to be an unstoppable defence in the last few games, has once again started to show it’s true colors.

A game full of ups and downs for Marc-André ter Stegen, who had little to blame for the two goals conceded, but made some questionable decisions in goal. Nonetheless, he was still a major influence throughout the game and prevented Barcelona from not dropping any further points. A terrific save to deny Nolito in the closing stages helped his side salvage a draw.

Tremendously reliable in defence, but woefully let down by his partner in crime. Gerard Piqué displayed immense blocks, positioned himself marvelously and was reliable in nearly every one-versus-one situation. Deserving of a better outcome, Piqué was one of the few people anchoring Barcelona’s backline.

Disappointing, dispiriting and discouraging performance from a player that once seemed to be the future of the Catalans’ defence. Samuel Umtiti’s constant battles with injuries have evidently tainted his career. The Frenchman showed little incentive to find himself in one-versus-one situations, thus immediately sprang forward to disrupt plays in it’s early stages. Though, this proved to be detrimental for the blaugranas as Umtiti was constantly caught out of position.

Improvement in certain aspects of Nélson Semedo’s gameplay is noticeable as he made some applaudable runs forward and maintained his composure in defence. Although he was fairly stable in defence, his end product in attack is yet to be polished. A decent showing from the Portuguese.

In contrast to his previous encounters, Jordi Alba looked relatively lethargic and fatigued. He offered exceptionally little in attack, and wasn’t the most reliable figure in defense. Deservedly so came off the field in the second half.

Iván Rakitić was seen dictating plays majestically in the first half, pulling the strings and playing a pivotal role in Busquets’ absence. However, despite his admirable display in the first 45 minutes, he partially lost the plot after proceedings, proving why Barcelona’s most ideal defensive midfielder is Busquets. Iván was occasionally out of position and even gave the ball away for Celta’s first equaliser. Even so, one mustn’t hide the fact that he was instrumental in ball retention and creating plays.

Incredibly mobile, persistent and effective with his prolific pair of feet. Riqui Puig was the missing piece in Quique Setién’s’s puzzle, adding verticality and innovation in midfield. In spite of often getting bullied off the ball, the youngster was a workhorse and constantly showed the will to move upfield. Yet another brilliant showing for Barcelona’s jewel.

Arturo Vidal ran and pressed tirelessly, but his efforts were gone in vain, because the Chilean was frequently unable to carry the ball forward and failed to assert his authority in the final third. He added very little to the azulgranas‘ build-up plays as he seemed to occasionally look like a headless chicken. Poor performance in accordance to Arturo’s standards.

Two assists for Lionel Messi who was incredibly authoritative on the field. At this rate, one can only imagine he would reach 700 assists before 700 goals. Leo missed a crucial chance he would bury on any another day, but was once again Barcelona’s glimmer of hope up front.

A blistering brace for Luis Suárez, who was lately racking up underwhelming performances in quick succession. However, against Celta de Vigo, he unleashed his wrath and found the back of the net twice in spectacular fashion. While his off-the-ball movement was sub par and he didn’t create much, Luisito was an undisputed asset to the team. A much needed performance from the Uruguayan gunman.

“I’m happy that I scored, but I’m frustrated about the fact that we didn’t win”

Lively and assertive on the left flank, Ansu Fati gave opposition defenders a real headache at times. He burst forward with conviction and came ever so close to finding the back of the net in the first half. The prolonged width Barcelona lacked was not much of a worry with the youngster owning the flank.