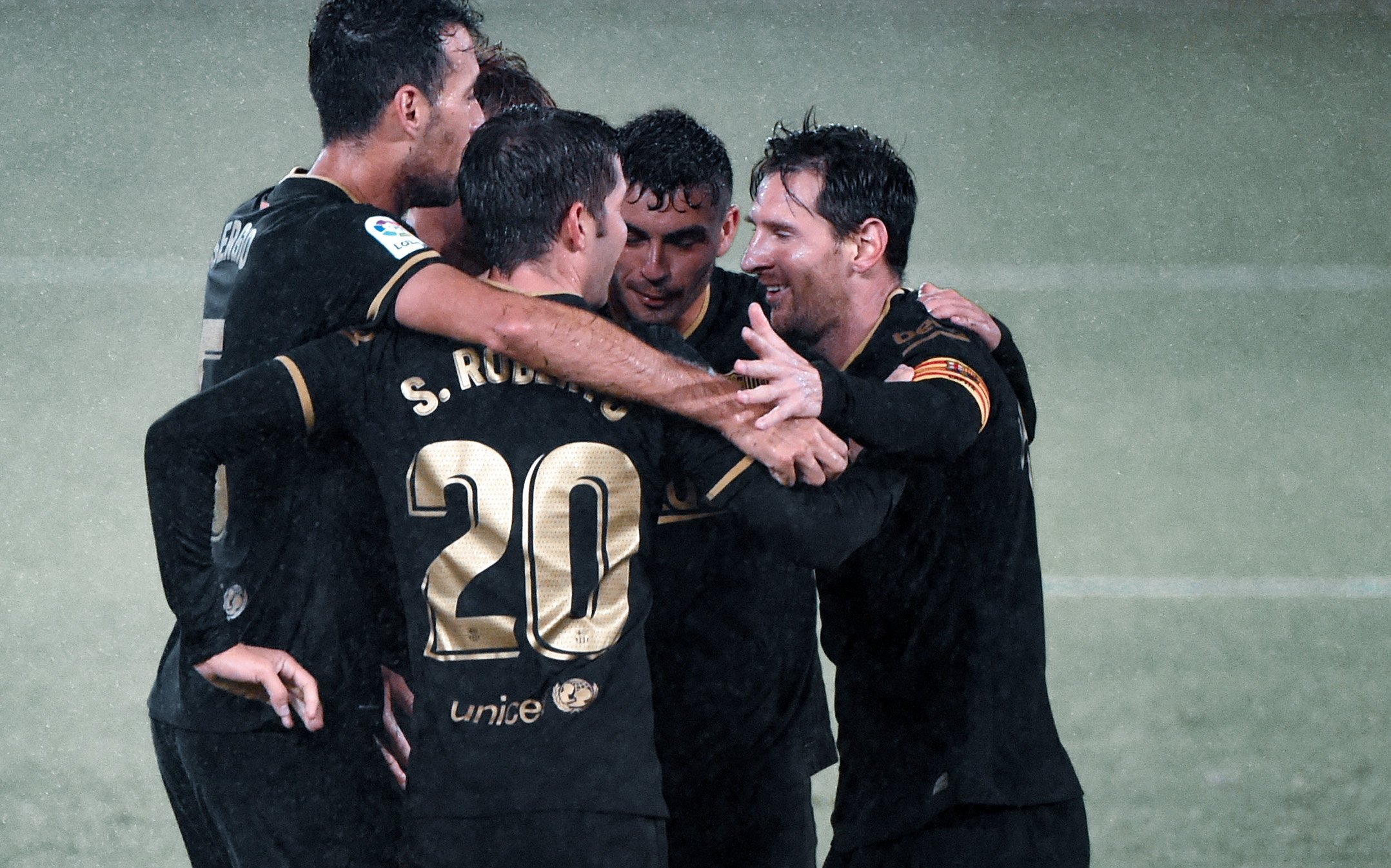 As Barcelona faced their first significant test under Ronald Koeman at a tough away fixture, we were able to see indications of a team that looks better than expected. Find out in this tactical analysis how Barcelona were able to win against Celta de Vigo at Balaídos in a convincing victory.

After a 4–0 victory over Villareal, Barcelona faced a tough test: Celta de Vigo, away. Barcelona have suffered at the Estadio de Balaídos in recent years. Even against a struggling Celta side last season, Barça were unable to win away from home.

Thus, for Ronald Koeman, this was his first proper challenge since taking over as the blaugranas‘ manager. Whereas, for his counterpart Óscar García it was a chance to give his team a boost. Not by winning, but even by scoring a few goals since they have so far struggled to do so this campaign. The match ended very much in the favour of the former. In this tactical analysis, we discuss the battle between Barcelona and Celta de Vigo.

Barcelona lined up in a 4–2–3–1 as expected. Under Koeman, so far we have seen some recurring themes. To start with, Barcelona look to build-up from the back. The goalkeeper will distribute to the centre-backs, who then start the transition into midfield. All players will look to avoid long balls and keep the passes grounded. In midfield, Frenkie de Jong and Sergio Busquets formed a double pivot. The positioning of these two is crucial. They act as a reference for their teammates as we will see later.

The full-backs are instructed to move up the field at every chance. In attack, Philippe Coutinho and Lionel Messi were given free roles through the middle. Ansu Fati on the left and Antoine Griezmann on the right have relatively rigid positioning, yet they would tuck in when the full-backs advanced.

Celta played a 5–3–2 as expected, with emphasis on possession and attack. Though they were unable to maintain these principles against a much superior side, they still tend to build-up patiently and playing with an attacking mindset. The goalkeeper would have three centre-backs in front to pass to. These three would look to play the ball into midfield or paly it wide for the full-backs. The full-backs would stay wide and move up the field to make it sort of a 3–5–2 formation.

In midfield, Renato Tapia, Denis Suárez and Gabri Veiga would form a triangle, which would move with Barcelona’s formation and look to force them wide. Iago Aspas and Emre Mor would be the two strikers, who would drop back to carry the ball sometimes.

We have seen many changes from Quique Setién’s Barcelona side now that Koeman is managing the team. One of the most effective ones has been the work rate and pressing.

Firstly, the full-backs are expected to be working harder than ever. From sustaining the attack near the opposition’s box to tracking back and performing purely defensive duties, Jordi Alba and Sergi Roberto have to run a lot. Koeman’s double training sessions and matchday training sessions look to be paying off. Both full-backs are essential in the pressing in this system.

Something that Barcelona struggled to do under Setién was winning the second and third balls. Itis easy to just blame their heights for an inefficient pressing system. However, under Koeman, the start of the new pressing system is looking very impressive.

If the ball is in midfield, depending on the position, either the mediapunta and a winger will press, with a pivot close to recycle possession, or a pivot and full-back will press. Barcelona look to create a two-versus-one press, but with another player available nearby as a passing option or to advance if needed.

As mentioned earlier, the pivots and their positioning is very important. These act as a sort of reference for the team. When the opposition has the ball on the wings with the Barcelona wingers and attackers closing them down, it is up to the pivots whether to form a triangle to recycle loose balls or to stay back and cut passing lanes. This is a decision based on their judgement and their positioning determines everything.

Celta de Vigo have a talented pool of players. And despite their results, Óscar García shows his good understanding of football often. Nonetheless, something that is hampering their progress is the tactical rigidity.

Celta were a man up for the majority of the match. Even so, they were unable to make the most of this and failed to even score once. One of the reasons this was the case was because they stuck to their initial approach. They looked to build up from the middle and then if possible, distribute it to the full-backs. In such situations of advantage, having a player with a free role or at least players who are always available to form a position of numerical superiority is the ideal case.

“We had a clear game plan, we wanted to play through the outside, behind their full-backs, but Barça lets you breathe little and it is true that their first goal hurt us. In the second half, we started with a different plan for the red card and again Barça scored. Their efficiency was big, three chances and three goals. We don’t have that”

Óscar García, after the 0–3 loss against Barcelona

Still, Celta continued with their 5–3–2 approach. With Griezmann’s substitution and Barcelona shifting into a 4–4–1, the Celestes had a chance to bring on an extra attacker in place of a central defender. The addition of midfielder Miguel Baeza would ideally mean that Celta could play an attack that was more sustainable. But the lack of width in attack and the lack of proper positioning so as to provide numerical superiority meant that this change was ineffective.

Apart from this, Celta continued to force Barcelona wide even though the visitors were strong down the wings. This caused needless problems for Celta. Instead, showing confidence in the players’ individual ability and allowing more freedom in the attacking aspect might be the way to go forward for García’s team.

As we saw from this tactical analysis, Barcelona’s performance against Celta was highly promising. For Celta, many problems need to be resolved. It looks like Barça are succeeding exactly where Celta struggle. Playing as a collective. Barcelona are on the track to playing at a standard which is better than the sum of their parts, whereas Celta are underperforming and need to start playing at least as if they are equal to the sum of their parts.