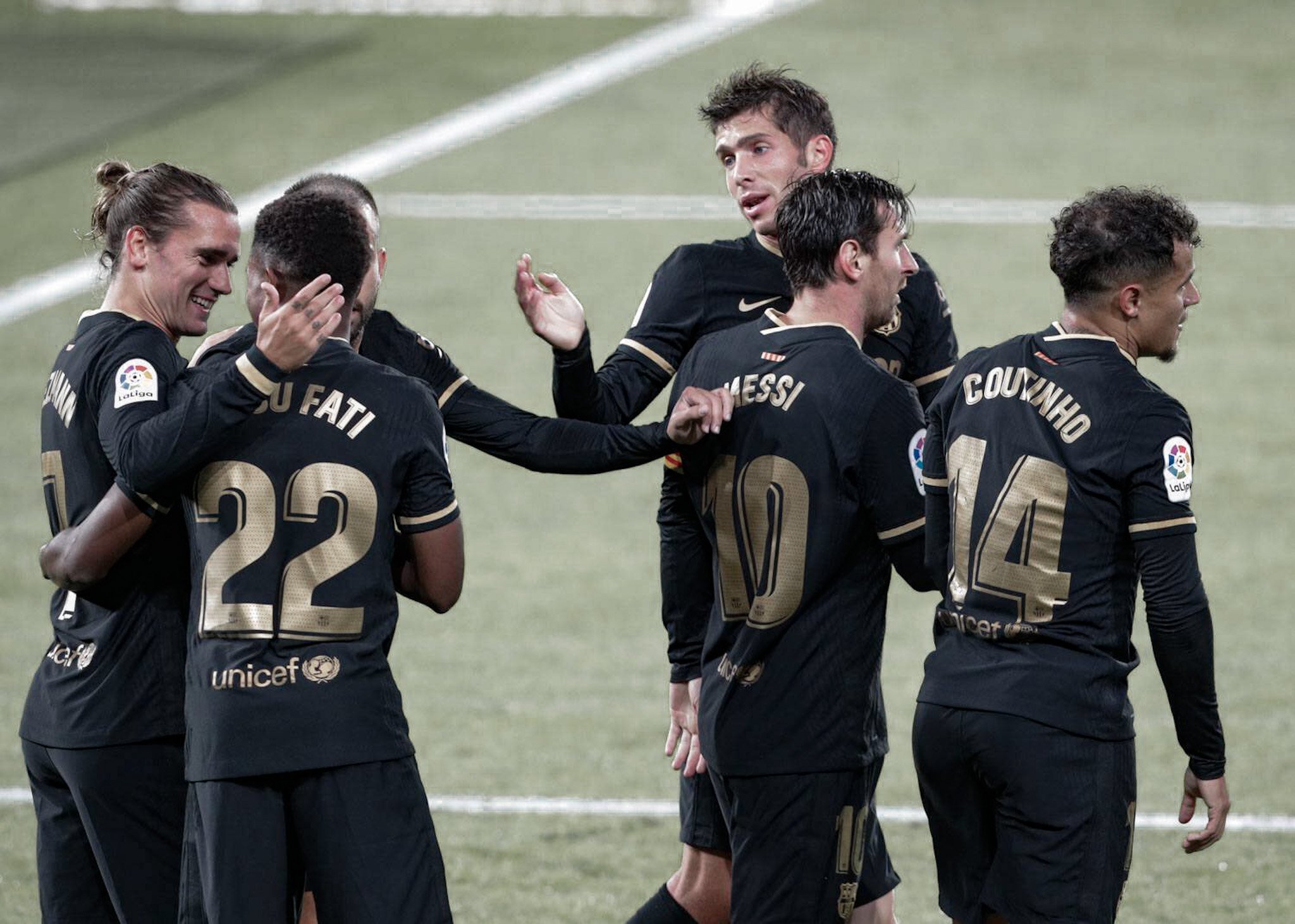 Barcelona came victorious from Balaídos for the first time in six years, and Culés have started dreaming again. Such a superb display should be qualified and analysed, and hopefully, Barça can confirm against Sevilla on Sunday.

These are the player ratings of the Celta game.

After a nonexistent debut season at Camp Nou, Neto’s first meaningful games at Barça would come this year. After a clean sheet against Villarreal on Sunday, the Brazilian keeper confirmed with another excellent display away at Balaídos.

The former Juventus and Valencia goalkeeper parried a shot from Nolito around the 80th-minute mark, if that were a goal, Barça might have had a lot more problems to end the game. Thank you, Neto, and continue like this!

Sergi Roberto had a quiet game in the first half, with the team always reaching for Ansu Fati and Jordi Alba and steering away from the right side of the pitch. However, after the red card, the La Masía graduate held his own to an astonishing extent.

First, after Neto’s save on Nolito, Roberto saved a close-range effort from Miguel Baeza and, much like Neto, kept Barça’s comfortable lead superbly. Truly one of Barça heroes tonight.

However, Roberto’s heroism did not end at his great save. The Spanish international scored an exquisite volley to seal the deal for Barça as they ran riot in Galicia. His effort came after Messi dazzled past the whole team and saw his effort deflected.

Another monstrous performance by one of the best Catalan defenders in the history of the game. Gerard Piqué’s game in Galicia was complete, but it could’ve been cut short had VAR not deemed a Celta player offside before Piqué had committed a red card offence.

After that, Piqué was imperial, running rings around the pitch to get the ball from his opponents and get it forward as quickly as possible. Even with ten men, Piqué was an absolute leader in defence suffocating the opposition attack even when his kamikaze jump could’ve injured him.

Clément Lenglet didn’t really do anything wrong in the game, but his relatively early sending-off was a headache Ronald Koeman could’ve dealt without. The Frenchman did not know where to put his hands and got two deserved bookings that made him earn an early shower.

Not the best display by Alba but he didn’t really put a foot wrong in Galicia. The former Valencia wing-back helped a lot in attack but had to stick to his position more after Lenglet’s sending off. One of the most prominent players before the red card, Alba kept his opponents quiet as they preferred attacking from Roberto’s side. A reliable but quiet display from a man that’s usually more talkative.

Sergio Busquets wasn’t the Sergio of old tonight and, while he didn’t play atrociously, one must start to wonder where is the line going to be drawn before Koeman gradually phases him out of the team. The La Masía graduate misplaced many passes and didn’t have the best movement, which is usually one of Busquets’s best aspects. As mentioned, Sergio wasn’t good enough while not being terrible; he was in the middle.

Frenkie de Jong’s role has massively changed under Ronald Koeman, and he seems to enjoy it. Tonight, the Dutchman displayed superb footwork while his movement was significant, especially as the Catalans began searching for a saviour after went down to ten men. Frenkie played deep and unlocked many opportunities for a defence that looked for many solutions to build up the play.

Grim. Sad. Uninspiring. These are the words that could qualify Antoine Griezmann’s display before getting substituted in the 45th minute for Ronald Araújo as he was sacrificed for the team’s well-being. In a half full of great shows, which we’ll talk about in a bit, Griezmann was the pick of the bunch in terms of terrible performances.

Whilst his work rate is always appreciated, Griezmann wasn’t bought to be a wing-back, and he’s showing next to nothing at the moment, perhaps making Koeman thinker around who’s going to be a right-winger in the squad. Griezmann’s first touch, although the weather wasn’t the best, was also grotesque and he could’ve shown more to get back his confidence. However, we do still support Griezmann even if he’s going through a rough patch and Culés mustn’t add insult to injury.

What can we say? Philippe Coutinho the outcast, the left-winger, is no more and the Brazilian has finally found his feet at Camp Nou. However, he’s undoubtedly played his best match with Barça at Balaídos tonight. Insane ball movement, two assists that could’ve been three and many breaches found in the opponents’ area, this was what Philippe Coutinho was bought for, and he was merely unplayable tonight.

Granted, his second assist of the game wasn’t so excellent as Messi dazzled past the defence, but he still opened the way for Ansu Fati to run into a perfect position for his goal. Coutinho’s shot on the post could’ve been his third assist of the match and his fourth overall this campaign, but he won’t be too fussed to see that Messi was offside. A fantastic job from Coutinho and long may it continue!

Antoher lively performance from Europe’s best teenager and he’s up there with the best players in the league already. First, let’s bring up a stat. Ansu Fari, with his goal against Iago Aspas’ Celta Vigo, is now the top goalscorer of the league having played two matches less than the Galician talisman, Maxi Gómez, Valencia’s sharpshooter, or any other great marksman in La Liga, ranking from Gerard Moreno to Paco Alcácer. At 17, Ansu Fati has reached ten goals in La Liga, ranking above Raúl Gonzalez in terms of goals scored before their eighteenth birthday in La Liga.

And his goal? What a goal! Ansu Fati scored an astonishing goal to open the scoring after Coutinho had cleared the way for him. His near-post finish landed straight into Villar’s net, and he went from strength to strength in the game obliterating the Galician defence on many occasions. A superb player, Ansu will look to play even better against Sevilla on Sunday.

A triangle of good performances. Lionel Messi comes as the cherry on top of the cake as his superb showing, despite not being officially on the scoresheet, was one of the most inspiring performances in years.

First, let’s give Koeman some credit because the team now plays with Messi and not for Messi, meaning the Argentine is liberated from his burden and can play at his own pace, positioning quite high on the field.

Then, let’s thank Messi for his magic. With ten men, any team would be excused to become shyer and fade away a bit, but the Argentine showed the way for his teammates as he dazzled past the defence twice for his team to score on those occasions. Without Messi, the match would’ve probably ended with a win, but not as convincing as this one. Gracias Leo.