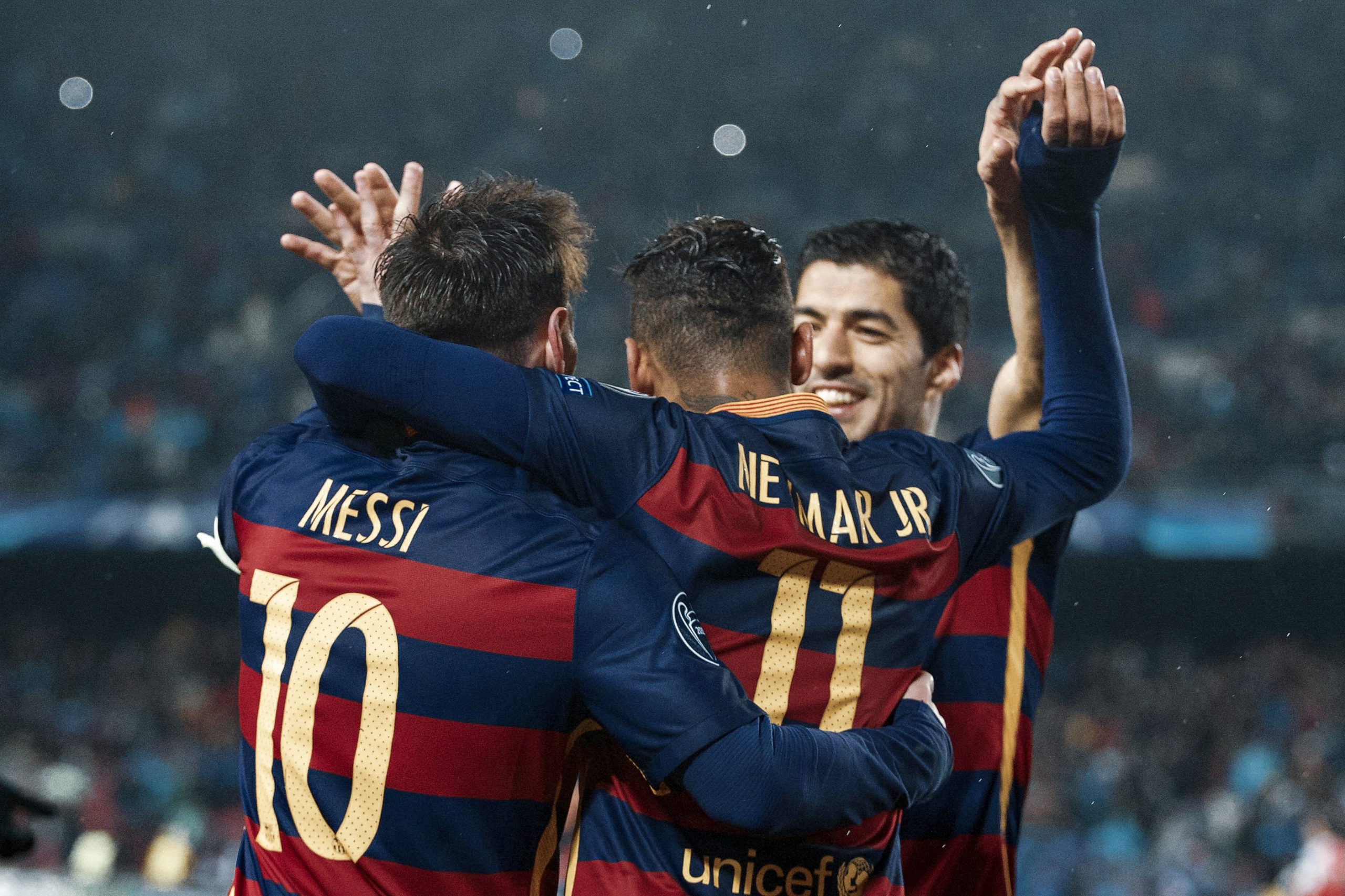 Another day, another milestone and another monumental bit of success for Lionel Messi. Such is the norm for this spectacular little man hailing from Rosario, for whom the English dictionary has nowhere near enough superlatives. On Sunday, the diminutive Argentine took to the field donning the Blaugrana crest for a record 768th time. Surpassing Xavi Hernandez, he has now every claim to the title of ‘Mr. Barcelona.’

With his advent against Real Sociedad, Messi now stands alone at the top of the list of most appearances for Football Club Barcelona. Spanning almost 18 years, this incredible footballer has enjoyed a glittering career with Barcelona, giving back just as much back to the club as the club has given to him, if not more. It is only fair that this record must so reflect.

Messi said it himself before he won his fourth Ballon d’Or back almost a decade ago: “Without my teammates I would be nothing.“

While it is hard to believe Messi wouldn’t have been at the top regardless, there is no doubting that he has had some fabulous partners along the way. On this glorious occasion, Barça Universal takes a look at five of the Argentine’s greatest teammates at Barcelona, with whom he has shared the best connections, the fourth article in our series Celebrating Messi.

The man from whom Messi took over the mantle. Memories of Xavi Hernandez and Lionel Messi are bound to bring a smile to Barcelona fans’ faces. The pair shared the pitch on 399 occasions, and almost every single one of them, magical.

Starting on the same right side of the pitch as Messi during their time together, Xavi and Messi naturally struck up a near-telepathic connection. When the Spaniard got the ball, he would know exactly where to put it for Messi to reach it. Xavi would always keep hold of possession once he got it, turning on a dime and releasing it just into just the right space, at just the right time, with just the right weight.

The one-twos between Messi and Xavi worked to devastating effect, the ball seemingly held up by a string of silk that only they could see. It is only fair that the maestro makes this list. When Messi equalled his record last week, Xavi made a heartwarming post on Instagram to congratulate him for his achievement. A wonderful picture of the Xavi hoisting a young Leo in his arms, with the caption: “Congratulations, Leo! It’s an honour that you have matched this record.”

The pair have contributed to 43 goals among themselves, including that header vs Manchester United, and have also shared the Ballon d’Or podium twice. While Messi did end up taking the crown home, he was quick to recognise his teammate’s greatness and contribution to his own success.

Back in February, Messi had surpassed Xavi for most appearances in La Liga for Barcelona and shortly after he added this record to his name as well. The massive banner laid out for the two legends at the Camp Nou said it all really- ‘Tocant El Cel’, it read in massive lettering as Messi and Xavi arm-in-arm point upwards — Touching the sky.

What could have been? The first question that Barcelona fans think of when the name Neymar pops up. He was the rightful heir to Messi’s throne, the prince waiting to take over. But alas, it wasn’t meant to be as the so-called next-of-kin left to forge his own legacy.

Nonetheless, the bond Lionel Messi and Neymar have shared at Barcelona is worth fondly reminiscing over. Brazilian and Argentinian, like oil and water, don’t really mix, given their vast rivalries. But that is the beauty of football, after all, it brings people together in strange ways. But make no mistake, these two explosive talents merged like nobody would have expected.

Arguably two of the most naturally gifted players of our era, Messi and Neymar combining, always seemed like a tasty recipe for success. And so it was. The pair shared the field for Barcelona 161 times, managing to set each other up to score on 56 occasions. When two of world football’s deadliest dribblers combine, there are bound to be fireworks.

In fact, Neymar quite often ended up being the star man for Barcelona in case of Messi’s absence, either due to injury or in games where Messi did not directly make an impact, the latter of which were few and far between. They seemed to have a lock on each other’s movement, and one pass to set them up against their markers one-on-one spelt doom for the opposition.

While Neymar and Messi’s story was short-lived, the rumours of a reunion never seem to cease. Not just great teammates but also great friends outside the pitch, there are signs that hint towards both of them wanting to play with each other again. But surely there’s no substance to that sort of speculation. Is there?

Another Brazilian icon, but nobody can raise qualms about his inclusion. Dani Alves is still the most decorated footballer in history, and when one looks at the time he has shared with Leo Messi at Barcelona, it is abundantly clear why he has garnered so many accolades himself.

His presence in the team is hard to put into exact words. But perhaps the most accurate description would be that of a ball of chaotic energy and immense footballing ability, blended with undeterred belief and charisma. But his synergy with Messi mostly had to do with the former.

Playing largely on the same flank for 349 games in a Blaugrana shirt, Messi and Alves are undoubtedly one of the most iconic duos of this generation. Dani Alves would constantly bomb down the right flank handling both offensive and defensive duties immaculately. With the Brazilian’s tremendous IQ to match, he and Messi exchanged lightning-quick passes to unlock the opposition defences in the blink of an eye.

Before you knew it, the ball was in the back of the net courtesy of an Alves assist to Messi, which were plentiful. In fact, the fullback supplied Messi with 26 assists in La Liga alone. In total, they shared 48 goal involvements and plenty more moments that would bring a smile to any football enthusiast’s face. Alves would leave Messi to produce his wizardry without ever having to worry too much about tracking back.

It is no surprise that Alves’ departure left such a huge void for so many years. Messi and Barcelona have sorely missed a player and personality like him.

Arguably the most aesthetically pleasing of Barcelona’s devastating midfield trifecta, Andres Iniesta also has the honour of sharing the Ballon d’Or podium with Lionel Messi on two occasions. It is hard to find someone who can weave a web of silky dodges and mesmeric feints with the ball as Messi. But Iniesta easily fits the bill. Graceful and destructive in equal measure, the sight of these two magicians combining would more often than not leave mouths gaping wide.

They have shared the field for an incredible 489 games, during which time they have amassed 53 goals between them set up by each other. And while the numbers will never do the pair justice, the crucial moments they have linked up in are awe-inspiring.

Ring a bell? The famous goal that would prove vital in Barcelona’s Champions League triumph was concocted by none other than these two geniuses. In the thrilling El Clasico triumph of 2014, Iniesta’s glorious opener set up by Messi, followed by a hattrick from the Argentine, were daggers to Real Madrid hearts that surely no Cúle can forget.

A few years later, the two would combine once again in the Champions League, once again versus Chelsea resulting in a roaring celebration. A wonderful image of Messi on Iniesta’s shoulders — the perfect tribute to their wonderful co-dependence.

The Uruguayan hitman is unmistakably among Messi’s greatest teammates and above that, also one of his greatest friends. Their journey together alas, came to an alarmingly bitter end, with Luis Suarez unceremoniously forced out of the club in a period of massive turmoil.

Lionel Messi even took to social media to express his sorrow and disbelief of having to part ways with a brilliant teammate and even better friend, with whom he has shared so many beautiful moments on and off the pitch, inside as well as outside the locker room.

“Today, I entered the locker room and got to realize what happened. It will be very hard to not keep sharing the day to day with you, both on the field and off the field. We’re going to miss those days so much. It was many years, many meals, and dinners. Many things that we will never forget. It’s going to be weird seeing you wearing another shirt, and much more weird while facing you. “

He did not hold his dissatisfaction with the way Suarez was cast away either, adding that he deserved a great farewell. But he was no longer surprised at the way things were done by the previous board during their reign of tyranny that brought about this dreadful scenario in the first place.

But the message tells you all you need to know about just how close these two phenomenal footballers were. And focusing on the footballing side of things, they were simply lethal. Prolific goalscorers but with a keen eye for setting up their teammates, their partnership mainly spelt out one thing — goals.

In the 258 matches they have played together, the pair have set each other up for a staggering 96 goals. It isn’t difficult to see why they broke so many records together and also why Suarez ended up third in Barcelona’s list of all-time top scorers. And, of course, they key finisher of the deadly MSN trio was so often El Pistolero.

The striker even overtook Dani Alves for most league assists to Leo back in 2018. His numbers were consistently mind-boggling and the fact that he did all this in a relatively short amount of time makes it even more impressive. The 2015-16 season, in particular, was dazzling for the duo when Messi supplied seemingly endless balls for Suarez to finish as he ended up with the Pichichi trophy with a ludicrous FORTY league goals.

The goals, the assists, the titles, the celebrations, the meals and all the mate teas that they sipped together, perhaps all just go to prove how sometimes the journey is far more beautiful than the destination at the end of it.