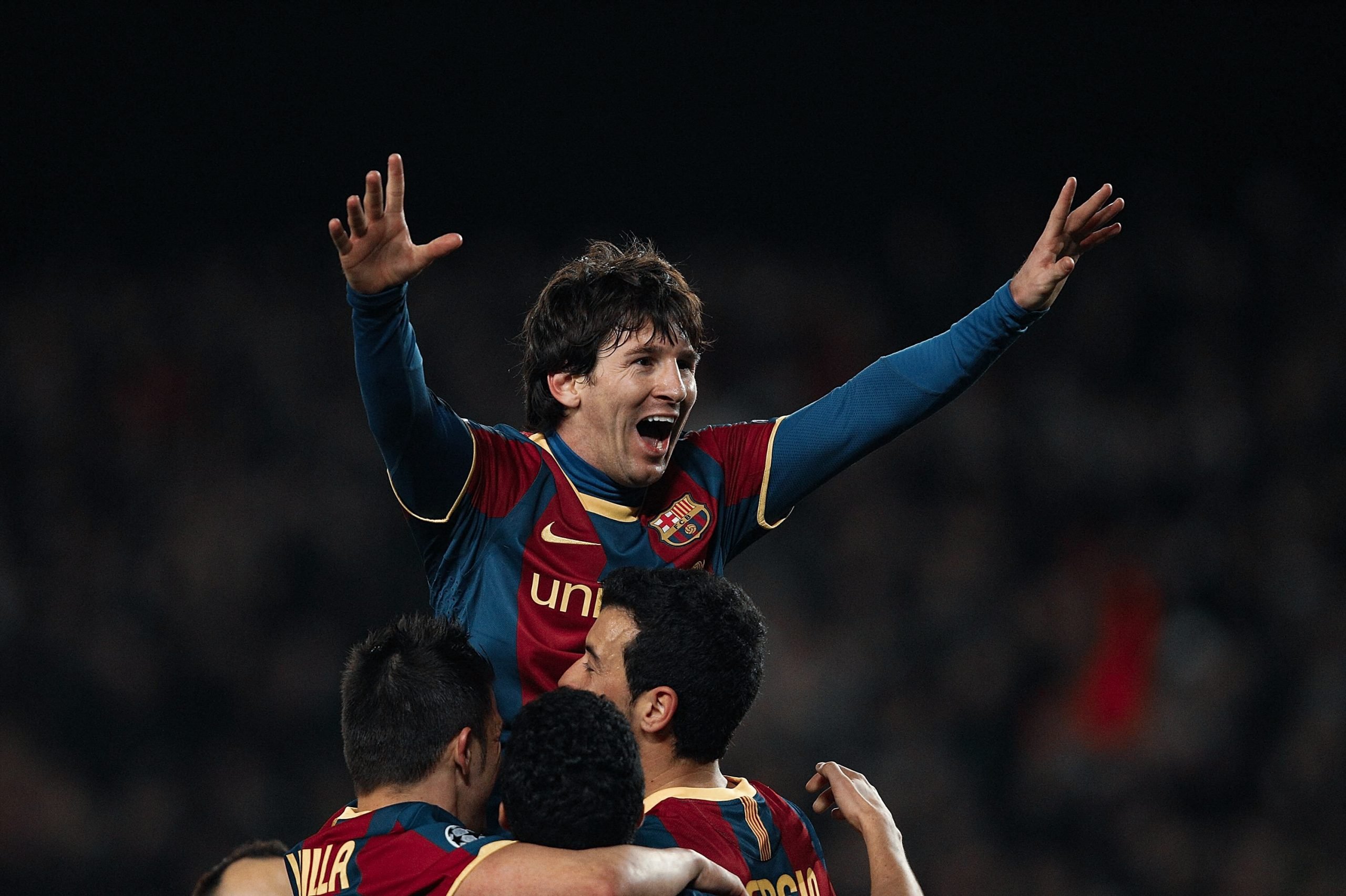 768 is now a significant number in the history of FC Barcelona. The number symbolises the loyalty, love, and dedication one Lionel Messi has shown to the Blaugrana shirt throughout his entire professional career, as the Argentine is set to become Barcelona’s all-time leading appearance maker overtaking club legend Xavi Hernández.

Throughout Messi’s time in Barcelona, the world’s best player has littered the football world with iconic images and gifted football fans moments of unseen genius in a career that has amassed a spectacular total of 661 goals and 290 assists since the Argentines debut back in October 2004. These iconic images and moments are re-lived by millions every year and still to this day La Pulga continues to create more, whilst still being labelled the best player in the world and the greatest of all time.

To celebrate this record-breaking week, here are the top five games the 6-time Ballon D’or winner has had in the Garnet and Blue of Barcelona, as part of our series: Celebrating Messi.

Iconic words on what was an iconic night in the long storyline of El Clasico. The first time FC Barcelona would meet their bitter rivals Real Madrid in the Uefa Champions League. A rivalry that hit an outstandingly high level throughout the 2010/2011 season, to the point where it boiled over into a pit of nastiness.

This match was no different. Disruptive aggression seemed to be Jose Mourinho’s way of stopping the beautiful, effortless football of Pep Guardiola’s Barca side, his way of stopping the unstoppable Lionel Messi. However, on this night, like most things in life, beauty prevailed, Messi prevailed.

This was not Messi’s best performance in a Clasico. The Argentine would spend the night dropping deep to connect with Barca’s midfield to create chances for attacking runners, as the Catalan side struggled to break down the low block of Mourinho’s Real Madrid. Still, if anyone were to break the deadlock and light up what was an ugly, disappointing game, it would be the number ten in Blaugrana.

On the 76th minute, Messi ran across Sergio Ramos to latch onto a well-placed Ibrahim Afellay cross to grab a first vital away goal. However, it would be the 87th minute of the game that football fans around the world would remember.

Just inside Real Madrid’s half, the Argentine played a one-two with Sergio Busquets before running past five players to slot the ball past Iker Casillas. An iconic European Cup moment had just been born and a moment of genius that Culés would be telling their future grandchildren about.

In an interview with RAC1 back in 2019, Messi revealed that this game is his favourite game and described it as a “unique memory”.

“Lionel Messi does it again, he’s superhuman. Lionel Messi has just exploded La Liga into life. Another chapter in the incredible story of this little man.”

The magnitude of El Clasico on April 23rd, 2017, went up a notch. Not only was pride on the line but La Liga as well. Barcelona were three points behind Real Madrid going to the game, knowing that if they suffered defeat, Zinedine Zidane’s side would be six points clear with a game in hand.

From the get-go, the influence the Argentine was going to have on this match was evident, taking up positions both centrally and on the right, pulling all Barca’s attacking strings. However, it would be Real who took the lead through a Casemiro goal. Soon after, Marcelo’s elbow struck Messi on the face, causing him to temporarily rock off the field after a stream of blood from inside his mouth fell onto the pitch.

The Catalan side and Messi responded five minutes later with a beautiful Messi goal. The Argentine laid the ball off to Sergio Busquets and continued his run to retrieve it from Ivan Rakitic. The Barca number ten would take one touch forward with his infamous left foot, one-touch right with his weaker right before striking low and hard with his left past Keylor Navas, all in one quick motion.

On the 73rd minute, Barça would take the lead through Rakitic before Sergio Ramos saw red four minutes later. With ten men, Los Blancos found a way to equalise through James Rodriguez late on in what seemed to be the final act.

When the number two went up on the fourth officials board, it not only represented the added time for the game but the number of minutes Barcelona had to keep their league season alive. On the 92nd minute, Jordi Alba produced one of his infamous cutbacks. Time seemed to freeze as Messi set up his shot, and before the Argentine even reached the ball, the Madrid faithful knew what was coming.

This became a reality when the man who haunted their dreams for the last decade was standing in front of the Fondo Sur stand, ice-cold with his number ten shirt fluttering in the air.

On a night where the six-time Ballon D’or winner played most of the match with a bloody tissue between his lips, it was the blood of those in white that the little Argentine shark was smelling throughout the iconic night, captured with one iconic image.

“He could be through for a fourth here Lionel Messi. They are trying to contain him, but it’s an impossible task. This man is just unstoppable. Four for Barcelona, four for Messi and they are in the last four.”

Having come back from two-nil down in the first leg, Arsenal arrived at the Camp Nou with confidence, knowing that they could score an important away goal to send them through to the next stage of the competition. On the 18th minute, Arsenal fans were jubilant as Nicklas Bendtner scored this goal, giving the Gunners the lead in both the match and the tie.

This joy did not last very long, as a 22-year-old Lionel Messi went on a rampage to become only the sixth player in UEFA Champions League history to four goals in a single match at the time.

The 21st minute saw the first. Barça’s number ten pounced on an unfortunate Mikaël Silvestre touch and took control of the ball before rifling an unstoppable shot into the top right-hand corner past Manuel Almunia.

The second came in the 37th minute. Pedro knocked back a deflected Eric Abidal cross onto the path of the incoming Messi and the Argentine took it past Gael Clichy before slotting a right-footed finish past Arsenal’s Spanish goalkeeper.

Messi finished off the first-half hat-trick three minutes before the break with an iconic chip and rounded off his night with a fourth on the 87th minute with a low shot through the legs of Alumina. The fourth was met with the adoration of the Camp Nou, as they worshipped their god with chants of “Messi, Messi.”

This match proved to be a memorable night in the career of the four-time Champions League winner, and his four goals were almost mercy, as the best player in the world could have had a double hat-trick under the Camp Nou lights.

On May 6th, 2015, the Camp Nou welcomed home one of its beloved sons, as Pep Guardiola returned for the first since his departure three years prior. On the same night, its most beloved son gave the ground something to remember with arguably the greatest performance the stadium as ever seen.

Stages do not get much bigger than this. FC Barcelona vs FC Bayern Munich in the Champions League semi-final at the Camp Nou. Two teams littered with superstars and two fantastic coaches. Histories paralleled by very few clubs in world football, but this night would be written into the books of both.

In the 76th minute, the game was still scoreless, but this was not a fair reflection of how this game was going. Barca had control of the game and were exploiting Bayern’s high line, which resulted in a host of good chances for the infamous MSN, amongst others. Good chances for Bayern were slim pickings, with Robert Lewandowski having the best of the bunch for Die Roten as he failed to convert a perfect Thomas Muller cross.

Messi received a pass from Dani Alves, pushed the ball with his left to create a better angle and shot low and hard to Manuel Neuer’s left to break the deadlock. The second was on the front of every newspaper the next morning.

The size up, the sit-down, and the chip all culminated into a moment of sheer brilliance, and one of his greatest goals. A moment to marvel over and admire for the rest of our days as football fans. A moment etched into every fibre of the term beautiful football. A moment only one footballer in the history of the sport could provide, and he did it with supreme conviction.

Messi arrived at the Camp Now that night with a t-shirt portraying images of Marilyn Monroe on it. That night the Camp Nou was his set and that year France Football rolled out the red carpet to award this blockbuster actor with a big golden ball.

“Out of very little, the little man gets a lot for Barcelona. He scores in England and its at Wembley and it puts Barcelona 2-1 up against Manchester United in the Champions League Final”.

May 28th, 2011 was the day the game of football peaked. Wembley Stadium played host to the best team of all time, containing the best player of all time, who orchestrated arguably the most brilliant individual performance of all time.

It was a repeat of the 2009 final in Rome where Manchester United were comfortably beaten by Barcelona. Two years later and a United team who were used to dominating themselves struggled to get the ball off Barça, being torn to shreds by the Catalan side.

On the day, Lionel Messi was miraculous. The Argentine played as a false 9, dropping deep to link up with Andreas Iniesta and Xavi Hernandez to provide for the marauding runners in the form of David Villa and Pedro. United got their first warning sign ten minutes into the match when Messi played Villa through, only for his shot to be blocked by Rio Ferdinand.

From here, it was all downhill for the Red Devils defence, and Messi’s performance was highlighted with a brilliant goal.

As Villa occupied three United defenders, Barça’s number ten picked the ball up off Iniesta in front of them and ran at the Man United defence before using Nemanja Vidic’s body to bend it into the net. The use of the Serbians body, knowing it would cause Edwin Van Der Sar to see it late, was a moment of brilliance from the Argentine, especially knowing that the goal won the game for the team.

After his goal, Messi continued to dominate the English side creating multiple chances for himself and his teammates. The Argentine’s run, in which he sold Nani with a lovely feint, led to Barcelona’s third goal and essentially killed off the match.

The images from that final have stayed with football fans to this present day. The great Alex Ferguson clenching his fists, as for the first time in his career, the Scot had no answer for what was happening on the pitch; a world-class team in Manchester United panicking as a result of Barcelona’s movement and rotations, and two world-class defenders in Rio Ferdinand and Nemanja Vidic’s inability to get anywhere close to Messi have lived on.

But who can blame them, as this was Lionel Messi greatest outing in the Blaugrana of FC Barcelona.