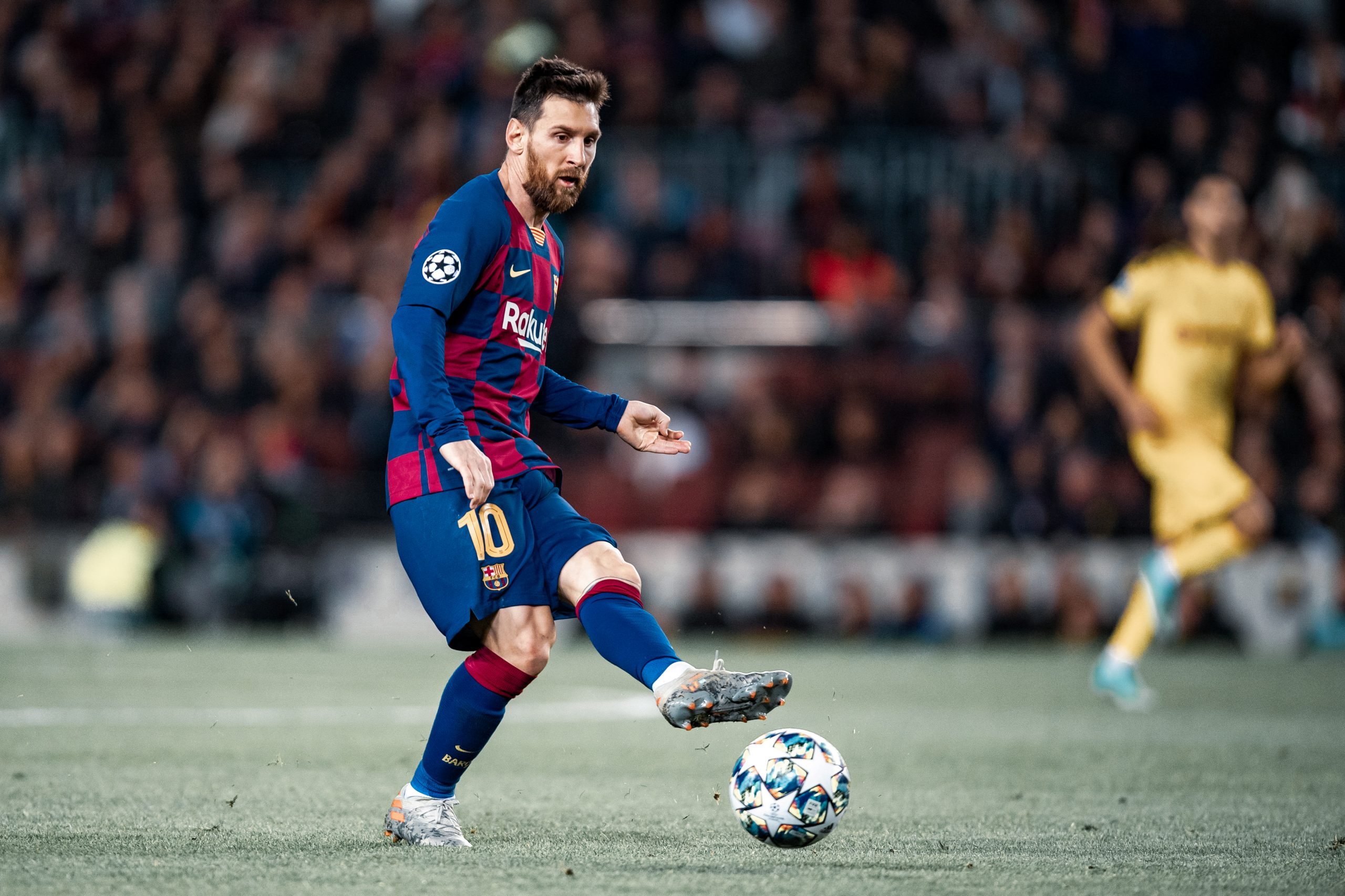 Hand-picking assists from Lionel Messi’s illustrious career almost feels unfair. Just when you think you’ve hit the jackpot, stumbling across an ever greater moment of magic from the little genius is simply inevitable.

While numbers will invariably fail to do Messi’s genius justice, having accumulated a grand total of 308 assists, the Argentine’s statistics couple with innumerable bewitching plays as a mere flick of his wand is enough to split defences in half. On the occasion of Messi becoming Barcelona’s leading appearance maker, Barça Universal invites you to sit back, relax, and enjoy the show as we take you through Lionel Messi’s top 5 assists at the club of his dreams.

In all fairness, this was probably one of Messi’s easiest assists of his career. A meagre tap of the ball is all it took to register Leo a goal contribution, but what makes it so special and awe-inspiring is the sheer uniqueness of this assist, one that fans bore witness to with uncertainty and astonishment brewing on their faces.

While this may be a controversial pick given many extraterrestrial assists from Messi are left behind, the fact that Culés had never seen a play of such creative essence in an official game of La Liga before simply earns this assist in our tally.

With all eyes pierced on the magician as he placed the ball on the penalty spot to extend the Blaugranas’ lead to 4-1 in the 80th minute of the game, only Leo’s two best mates had earned the privilege of knowing what the number 10 had conjured up. As an eerie silence loomed upon the stadium and the whistle blew, Messi jogged towards the ball only to roll it sideways to Luis Suárez, who marauded in the box to find the back of the net.

While initially the pass was rehearsed for Neymar, it was Suárez’s anticipation and desire to seal a hat-trick that enabled him to bamboozle a helpless Sergio Álvarez in goal, with the Uruguayan gunman securing a memorable hat-trick. The team immediately huddled up to celebrate the iconic goal with practically the same expressions as every Culé sitting in front of their TV screen or watching from the stands of the Camp Nou.

This was just one of the many games that encapsulated Lionel Messi’s innate versatility. Facing Alavés in the Copa del Rey final of the 2016/17 season, the stakes were unquestionably high on the night as Barça were in desperate need of preventing their campaign from going trophyless. However, the nerves were never going to catch up to the ice-cold magician, who not only etched his name on the score-sheet; but also provided one of the best assists of his career to Paco Alcácer.

Just two minutes after the second half commenced, Leo received the ball on the touchline on the right-hand side, with the score currently 2-1 in the Catalans’ favour. Despite Alavés constantly being forced to retreat back and close passing lanes, their defence proved to be no match against Messi. As two defenders attempted to block the South American from raiding forward, he casually wriggled his way past both barriers and found himself immediately at the edge of the box where he was greeted with an Alavés roadblock.

In spite of all odds, the ball stayed glued to Leo’s feet throughout the entire play, and he seamlessly cut inside, leaving the El Gloriosos’ defence in a state of confusion. Having done all the dirty work, the Argentinian spotted an opening in the back-line and provided Alcácer with the cheekiest of reverse passes. Although the striker seemingly looking offside, his perfect positioning enabled him to find the far post and extend the Blaugranas‘ lead to 3-1.

Squirming his way past 4-5 players in a similar fashion to the goal he scored against Athletic Bilbao in the Copa Del Rey final, Messi’s ability to dribble in such tight spaces and even have the vision to locate Alcácer was a testament to the fact that Messi is arguably one of the most complete footballers to have ever graced the beautiful game.

A pass of perfection matched with a clinical finish; Lionel Messi once again stepped up to the plate in an El Clásico to provide an assist of the highest quality. A scintillating run from the magic man saw Alexis Sanchez bag a goal on his league Clásico debut in approximately the 30th minute of the game. After Real Madrid had taken the lead, the Catalan giants were in dire need of finding an equalizer.

Countless chances at goal were marred with disappointing misses, but eventually, a beautiful play constructed by Leo broke the deadlock. As he received the ball in his own half, Messi utilized his burst of pace to squeeze his way through the Los Blancos‘ midfield. Beating not one, not two, not even three, but four players with his mazy dribbling, the young prince released an incredibly precise ball to Alexis Sanchez, who got the better of Iker Casillas in goal to find the far post from just outside the box.

It was the perfect reward for Messi’s jaw-dropping pass. Albeit initially, Sanchez took most of the limelight, it was without a shadow of a doubt Messi’s instinctive ability to drive through an entire fleet of Real Madrid players towards the heart of the defence that sealed such a vital goal in a fixture where he has always managed to pull off extraordinary plays.

Barcelona were running riot against Rayo Vallecano away from home, having scored two goals in the space of just 26 minutes. After continuously bombarding the opposition defence and even scoring a tap in early in the game, a magical dribble from the Argentine capped off an immense first-half performance, with Seydou Keita extending the visitors’ lead to 3-0.

Keita pinged a lovely ball from deep to Messi, who resided on the right flank as a neat switch of play diverted the entire defence’s focus on the number 10. Messi inverted inside with his mystic pair of feet, breaking ankles mercilessly. Weaving his way inside like a ballet dancer with delicate twists and turns of his body, the entire back-line attempted to throw themselves upon him, but they found no success as a barraging Seydou Kieta eventually made his way from the left flank inside the box.

After making a mockery of two defenders, Messi audaciously nutmegged the third player in his way as he slipped in a marvellous pass to Keita between the defender’s legs. While the Malian started the play and responsibly ended it through a sublime finish, it was probably overshadowed by Messi’s virtuosic run, who not only majestically dribbled his way past a huddle but also sliced open the entire defence.

An iconic performance on an iconic stage. Lionel Messi may have been unable to stamp his name on the scorecard but showcased an astounding exhibition in the El Clásico, where he provided two top-notch assists to his partner in crime, David Villa. The game ended up being one of Barça’s most impressive victories, considering the 5-0 pounding over Madrid still lives fresh in memory to this very day.

In the 54th minute of the game, Leo danced around Real’s defense to spot a raiding David Villa inside the penalty area. The Spanish striker expanded the Blaugranas‘ lead to 3-0, with the help of a terrific play from Messi. However, the duo’s telepathic connection was once again seen just two minutes later, with Messi, on this occasion, pulling off an even more mesmerizing pass towards his associate, and warranting himself the numero uno spot in this article.

Collecting the ball in his own half, Messi skipped his way past two white shirts in search of Villa who was making a blindsided run on the left flank. Dodging his way past a couple of players with the silkiest of touches, Messi turned inside to release the ball to Villa. Playing the pass with the perfect weight and threading it in between two Madrid defenders, Villa was through on goal and repaid the 6 time Ballon d’Or winner’s efforts with a nifty nutmeg between Casilla’s legs enabling him to find the back of the net.

The assist was a brutal reminder to football fanatics that even without Messi’s insane efficiency in front of goal, he is one of the best playmakers to have ever laid his feet on a football field. Giving Villa the opportunity to score Barca’s fourth goal of the game, the pair embraced with joyous faces. Although the Spaniard’s finish was a work of art, it was truly Leo’s aptitude to not only dribble his way past players; but also time the pass with such elegance that extended the club’s lead.