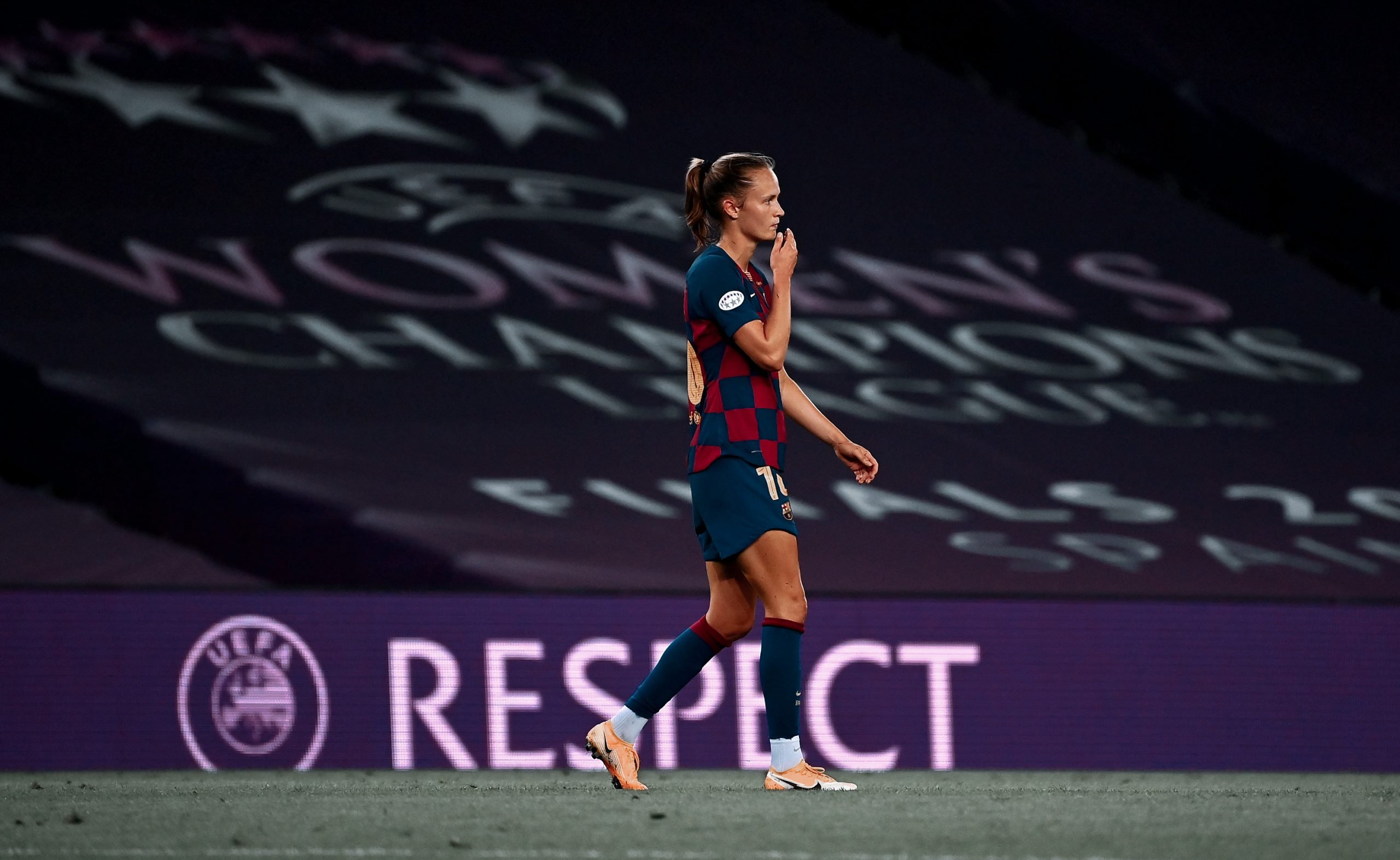 As shown in the Champions League semi-final loss against VfL Wolfsburg, Barça Femení may be short of leadership qualities upfront, but 25-year-old Caroline Graham Hansen is starting to provide just that.

After the loss against VFL Wolfsburg, FC Barcelona Femení learned that they needed to improve upon a lot of things if they wanted to be the best team in Europe. Many of Barcelona’s unresolved issues were exposed that night, such as poor match management, questionable team selection, and lack of clinical attacking.

However, the most standout thing that went wrong for Barcelona was their season-long issues with finishing, which came to a head at the worst possible time. Upon reflection, it was clear that Barcelona lacked both a positive mentality and a commanding leadership personality up top. That role is still desperately needed if Barcelona wants to be champions of Europe, and of all their current forwards, Caroline Graham Hansen may be the player best suited to pick up that role.

Ahead of the Barcelona v Wolfsburg, it was difficult to predict who the winner was going to be. Both teams were very similar in that they were renowned for the same matter: their outstanding attacking strength. For Wolfsburg, it was Pernille Harder, Fridolina Rolfo, Ewa Pajor, Alexandra Popp and Svenja Huth. For Barcelona, it was Lieke Martens, Mariona Caldentey, Jenni Hermoso, Asisat Oshoala and Caroline Graham Hansen.

Understandably, one of the most popular predictions about the game was that it was going to be a goal-fest. It didn’t quite work out that way though, as both teams’ forwards struggled to find the back of the net.

Barcelona in particular had a shocking night in terms of finishing. 14 shots with only one on target gave them a 9% shot accuracy. Something was clearly off about them, especially considering that everyone knows what these players are capable of. At that point, their front four was arguably Europe’s strongest overall attacking threat. It is for this reason that this loss and their lack of clinical finishing was 100% mental.

Barcelona’s captains and other leadership personalities are all midfielders, defenders or keepers. Consider Vicky Losada, Alexia Putellas, Marta Torrejón, Sandra Paños, Patri Guijarro and some of the younger players like Laia Codina and Aitana Bonmatí. These footballers in particular have captaincy qualities in multiple aspects. They command the play on the pitch, they aren’t afraid to give orders to anyone regardless of talent or superiority, they perform at a high level for 90+ minutes, they aren’t afraid to step up publicly and take responsibility with the media, and they are deeply dedicated to the club. What else do they all have in common? None of them are forwards.

This isn’t to say Barcelona’s attackers aren’t mentally strong. You have to be to play at this level. But at this moment, there is no outstanding player in attack who shows the traits of a captain. Which of the starting forwards can be the answer to this problem?

The two players that can already be eliminated from the conversation are Asisat Oshoala and Lieke Martens. These are two of the most accomplished players for their respective countries and have been at the top of the world for a while, but they don’t display many leadership qualities. Neither of them is very vocal or commanding, they aren’t too keen on giving directions, and, most importantly, their mentality in a game typically depends on those around them. There is nothing wrong with either of them not being leaders, but these two just won’t be the ones to do it.

Jennifer Hermoso is unlike Asisat and Martens in this regard. She’s a record-breaking veteran for both club and country and she even holds captaincy for Spain. Her presence and reputation as one of Spain’s greatest ever footballers command respect on its own.

However, she is a player who prefers to lead by example and move in silence. This is a perfectly valid leadership style in itself, but it doesn’t suit the needs of Barcelona. Jenni was one of Barcelona’s best performers against Wolfsburg, but her top-notch performance clearly wasn’t enough. The team needed more, and despite her leadership qualities and veteran status, she couldn’t provide it.

Additionally, culés understandably don’t want to think about it, but Jenni isn’t getting any younger. She isn’t the team’s future, and it wouldn’t make much sense for the forward line to structure themselves around her leadership.

This only leaves one other established player amongst the four starting forwards: enter Caroline Graham Hansen.

Graham Hansen is still just 25 years old but has gone through a lot in her career. She has had two heartbreaks in two Women’s Champions League finals and was injured during both of them. Her international career has been similar: she missed the 2015 Women’s World Cup due to injury and suffered three straight losses in the group stages of the 2017 Euros as Norway’s FA was dealing with deep dysfunction. Like Rory Smith put it, her career has long been a “question mark” in the eyes of many. The way she has overcome her own doubts since then is unlike most players in this sport.

Hansen has become a different animal as she has gotten older. No Wolfsburg fan can forget how she kneeled down and pumped her fists after scoring the decisive penalty kick against Bayern Munich in the 2018 DFB Pokal Final. No Norwegian – or Australian – can forget how in the 2019 Women’s World Cup, she kept a stone-cold face, looked Lydia Williams dead in the eyes, and slotted Norway’s first penalty of the shootout straight past her, raising her arms in celebration and commanding Norway to the quarter-finals.

“In the last two years she has grown an awful lot, in two ways that complement each other: she is a great leader and a great team player at the same time. All her energies go into helping the team to play better and win. She was crucial for us at the World Cup and I still don’t think we have seen the best of her. She has got the quality to change games, and when it comes to one-on-one situations, she’s the best in the world…She has become a natural leader”

This display of mentality didn’t stop when she got to Spain either. In her first season with Barcelona, she was a pivotal part of the attack and had no fear approaching any defender. With 24 direct goal involvements in all competitions, it’s clear she is already comfortable with her role in the team.

Graham Hansen also has a clear love for Barcelona and has since she was a child. Despite only being present in Catalonia for a season, Caroline Graham Hansen is one of the most vocally committed players in this current group at FC Barcelona. Her words after the Wolfsburg semi-final loss reflect this in two different ways.

“I would say today we were better which proves that what Barça have been doing in recent years has been good, we are here to be reckoned with next year. We will go home and keep on training and improving because we want to avenge this defeat next year”

Caroline Graham Hansen, via UEFA TV after losing against Wolfsburg

But on her Instagram, she chose a softer tone, expressing her love and dedication to the club, calling it “her home” and using the hashtag #soyculé (I am a culé): “I’m so proud to be a part of this team. This club. This family. Football isn’t always fair. That’s the sport. I accept that. We will come back. I know. We know. This is my home now. Thanks for having my back #soyculé”.

Caroline Graham Hansen admittedly has had some growing pains in this very new environment, but with this loss, she has only shown a drive to improve. She has everything at her disposal to be a leader in the attacking third. It’s her dedication, hunger, and ever-improving mentality that makes her the most likely player to become a leader for Barcelona’s forwards.