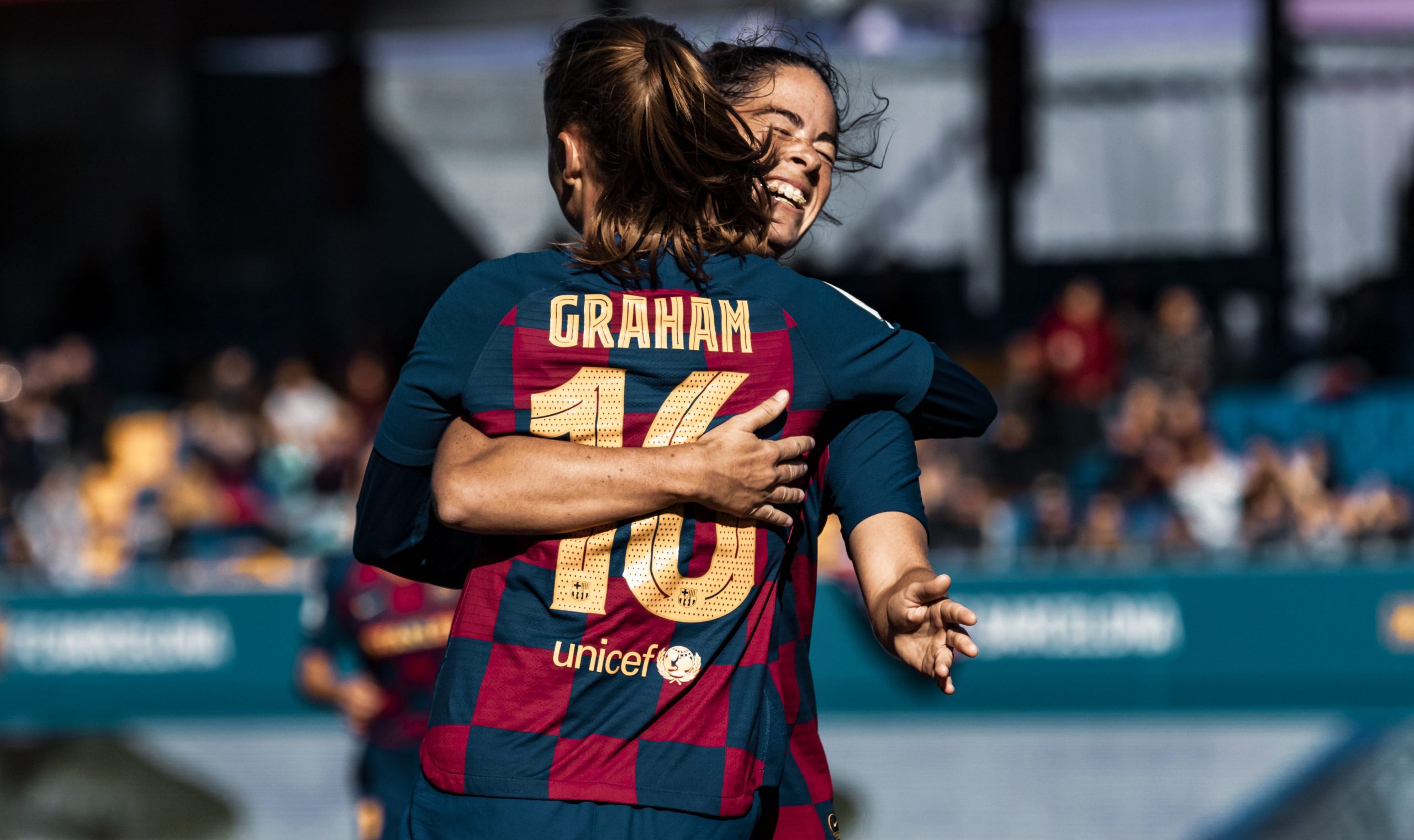 Culés are already familiar with seeing stellar partnerships in the right wing, but Barça Femení, with Caroline Graham Hansen and Marta Torrejón, is looking to relive past glories.

The evolution of football has seen the ever-increasing development of different positions and tactics. With strategies at the micro-level becoming remodelled, and philosophies like Positional Play and Gegenpressing – pressing in advanced positions and active closing of space – introduced, positions have also now been modified and updated. Now, nearly every third of the pitch has been reinvented.

Focusing on the defensive end, full-backs are expected to give much more than ever before. Requiring finesse and athleticism, these players are expected to surge forward and join in on the attack. And their combination play with the attackers is becoming a vital part of unlocking strong defensive lines. With women’s football evolving every day, it’s time to review how the right flank partnership of Caroline Graham Hansen and Marta Torrejón becomes a decisive factor for Barça Femení this season.

The iconic right side partnership that culés remember: Dani Alves and Lionel Messi

The legendary understanding between Barcelona’s duo Dani Alves and Lionel Messi went far beyond the numbers. They shared a deeper connection, an even psychic connection. Messi knew where Alves was on the pitch at all times, and Alves knew where Messi was. They knew what the other was doing. Their link-up play and ability to read the other person’s game was a thing of beauty. An unprecedented supernatural partnership that made them one of the most prolific and iconic duos to have ever existed.

Their understanding was something else, whenever Dani Alves drove through the right flank, he knew when Leo wanted the ball and when he didn’t. The two worked together to destroy many oppositions and interestingly, the Brazilian is Messi’s best creator for goals.

“Playing with someone as unique as Leo is the most incredible thing that can happen to you, but there’s always that doubt in your mind if it’s you that really has the quality or if it’s him”

In fact, Dani Alves had assisted Messi a staggering 42 times when he left Barcelona. Alves had no problems in admitting that he was a secondary player. But still just like Alves says: “The future will remember Messi as a great player. Did he score goals? They would ask. Yes. Who passed him the ball? Dani Alves. My name is there, like it or not”.

Dani Alves and Lionel Messi have won three Champions League titles together and their right-wing combinations are a huge part of it. They would play neat one-twos, show a clean player of heels, and pull the strings for creating mesmerising plays.

It is foolish to compare the likes of Messi and Dani Alves with that of Graham Hansen and Marta because of what Barcelona men’s duo achieved together all the years and the consistency with which they did it. But giving a shout for Barça Femení’s right-flank partners won’t be bad either with them nonchalantly dominating the right side of the attack.

Caroline Graham Hansen’s transfer from Wolfsburg to Barcelona was one of the most highly rated transfers of the season. The blaugranas managed to snatch up one of the best dribblers of the women’s football. I would easily rate the transfer as the best in the transfer window.

Whenever she is on the ball, you can’t just take your eyes off her. It’s no easy feat to put a single defender to contain her. We often see the opposition forwards asked to do the defensive duties when Hansen is on the ball. You can clearly see in the picture how she is taking defenders out of their position making space for others to feed on. We see something quite similar to this when Messi is on the ball. She can change the tone of the match in seconds and blow off opposition confidence. She has formed a formidable partnership with Marta Torrejón. They combine well and cause a lot of damage on the right side of the attack.

Marta Torrejón connects well with Hansen as an attack-minded full-back. She understands how the midfielders in front of her like to play. If she is playing with Alexia Putellas and Aitana Bonmatí in the middle, she bombs in the attack constantly because they work hard and leaving her space to exploit. If she is playing with Mariona Caldentey, she knows that Mariona likes to dribble, so she can use the wing more while backing her up. Having said that, if there is space for her to exploit, she will bombard forward, and Hansen usually finds her with precision.

Marta Torrejón often anticipates what Hansen is going to do. The connection between each other means Marta knows if Hansen is going to thread the ball between the defender or if she is going to cross the ball across the face of goal. She understands that there’s no point in getting forward and not receiving the ball.

When the ball arrives at Hansen’s feet she knows that she can have a touch and immediately move it on. When the ball is going to Hansen, Torrejón usually starts her run, as she knows that Caro is too quick. With some other players, she can check her run, but with Hansen, they have that telepathic understanding to get the ball into the box leading to goals or goalscoring opportunities.

One of the main examples of this aspect of the connection was the December 2019 league match against UGD Tenerife. There were plenty of instances where their partnership helped alleviate defensive pressure as well as create better options for an attack.

Here you can see Torrejón, in red, is under pressure on the wing. She has two Tenerife players on either side advancing towards her with a third next to the referee making a sprint towards her as well. You can just barely see Graham Hansen near the bottom of the frame, watching and waiting.

Marta goes to the ground and Tenerife regains possession from the error, but the ball goes loose after an interception from Patri Guijarro, and Hansen, in blue, swoops in to take the ball away from the pressure with a bit of skill. She safely passes it back to Sandra Paños while Torrejón temporarily takes her place in that advanced role. They return to their original positions once possession is secured back in the midfield.

Minutes later, Patri sends a pass to Torrejón, who is now at right-back advancing up the wing. Hansen sees space where she can create an immediate goalscoring opportunity and points for Torrejón to send it through to the wing, but she instead passes a through ball towards Hansen, closer towards the middle.

Hansen dribbles away from pressure towards the middle as Marta sprints up to overtake Hansen’s position in the box. The two of them opt to attack up through the centre of the pitch instead of staying towards the sideline and putting one of them in a vulnerable one-versus-three position against the Tenerife defenders tightly marking them.

Graham Hansen quickly dribbles clear of the pressure away from the wing and then immediately turns her body to find Torrejón, as expected, in the advanced position. From here, she sends the ball right back to Torrejón.

From that pass, Torrejón draws three defenders out towards the wing when she anticipates Hansen’s forward run and passes the ball back to her, allowing Hansen to shake off Tenerife’s number 19. You can see in the photo that there is now plenty of space in the centre of the pitch for Graham Hansen to make a progressive play now, as she could pass it to Aitana behind her who also has plenty of space, Alexia to the left, also with plenty of space, send in a through ball to Jenni Hermoso or even play out the wing through Torrejón, who is still in an advanced position.

Within the span of ten seconds, they created a much better situation for a goal to be created than simply passing up the wing and sending in a cross where Hermoso would have been the only player that could get on top of the header – implying they didn’t lose the ball in a 1v3.

Unfortunately, this sequence didn’t result in a goal, as Hansen then passes the ball back to Aitana, who switches the play to the opposite wing to Mariona and the play dies from there with a cross gone awry. The pairing has otherwise been directly successful many other times, most memorably Torrejón’s second goal in the now-iconic Spanish Super Cup final. Hansen and Torrejón switched positions constantly throughout the match, meaning Torrejón had an advanced role for a lot of it, explaining her uncharacteristic four goals.

In Torrejón’s second goal, we see both her and Caroline Graham Hansen countering up the wing. They are in their respective positions of right-wing and right-back and Hansen has the ball when she dribbles up into the box.

Hansen stalls with the ball at her feet as Torrejón continues to make her run into the box. A short pass to Torrejón’s feet and an easy strike to the bottom left corner and Barcelona is 3–0 up. Simple as that.

This partnership works so well because Hansen and Torrejón are constantly aware of their own positioning and each other’s positioning. They are also aware of each other’s strengths and weaknesses and consistently provide support to each other on the right-wing in both offensive and defensive scenarios.

In women’s football, usually, there isn’t much talk about micro-analytics like wing-back combinations, but considering the number of goals scored and the chances created, Barça Femení are making football look simple with their vertical passing and the combination play in their final third. We hope they don’t lose the connection and deliver the goods going to the final third of the season with important knockout matches coming up.