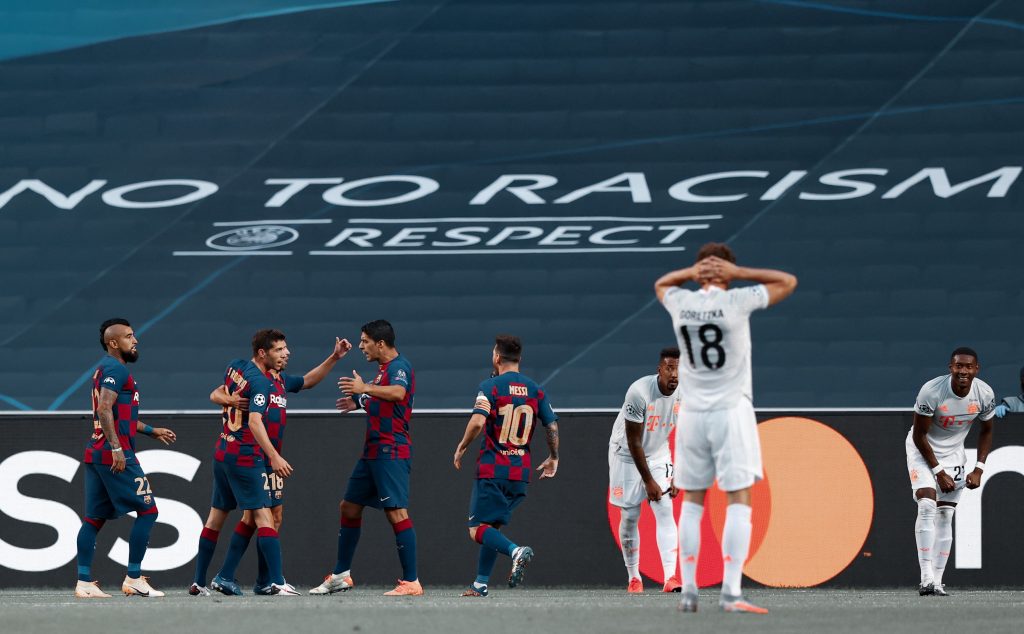 All good things must come to an end. Though hard to accept, it is an end of a cycle for Barça. Multiple reports suggest a heavy offloading in the coming transfer window, with even club idols not being spared. However, can the club cope with the sudden loss of so many players? Can Barcelona really give up on its heavyweights abruptly?

It has been close more than two days since a traumatising defeat at the Estádio da Luz. Every passing second still stings on the existing wound. While culés dearly hoped it was just a bad dream, it is only now that they are coming to terms with reality. This is a team that boasts of the greatest player in the world. In its ranks, it has one the best goalkeepers in the world, two world champions who were a part of the Spanish golden generation. A certain Uruguayan who overcame the Lionel Messi – Cristiano Ronaldo duopoly and won a Golden Boot. However, like last season and the one before that, these masters of the game got torn apart when it mattered the most.

As they returned red-faced, the players of this glorious club had to avoid a confrontation with the fans. The club’s inability to let go of these legends goes on demolishing its image year after year. There is no shame in admitting that age catches up with a person, may he even be a football player. As clubs across the globe continue acquiring the finest young talents and buildup around them, Barcelona has refused to. The slow poison that has been eating at this majestic club is beginning to show irreversible effects.

“Life doesn’t always give you second chances, so take the first one”, they say. The club and the board had a chance after Roma debacle. When they got the second chance at Anfield, once again they turned their back to it. And where did that rueful path lead to? To one of the most embarrassing defeats in the club’s history.

As the team still reels in the shock of the catastrophic night, there do seem to be big statements coming out. According to Mundo Deportivo, the club has put 17 players on the transfer market, including names like Jordi Alba, Samuel Umtiti and Luis Suárez. Sport adds that even the club legend Sergio Busquets has been enlisted transferable. If no good offers arrive, the club is reportedly ready to terminate their contracts. Despite seeming far-fetched, there is an element of realisation that comes with this. It does seem unlikely that there will be a termination of contracts or a heavy offloading of players. However, all a man can do is speculate.

The club legends must be selfless and accept when it is time to leave, like Carles Puyol, Xavi Hernández or Andrés Iniesta did in the past | Photo by Javier Soriano / AFP via Getty Images

Change is the only constant. The club stands for itself, no player or board can claim to be bigger than the badge. As much as the public humiliation pains, it exposed all the holes and flaws in the club. Surely, it cannot be overlooked anymore. The team does have a reasonable array of young players at its disposal. The likes of Ansu Fati, Riqui Puig, Carles Aleñá, Fransisco Trincão, Pedri, Ousmane Dembélé and others present hope for the upcoming seasons. Nothing is possible, though, until the senior players realise that they may no longer be assets.

While it is a priority to focus on the younger crop of players for the upcoming season, it does not necessitate the departure of the senior players. Hasty decisions may render the club trophyless once again. Jordi Alba may have been declared transferable, but it is a fact that the team has no replacement for him. Luis Suárez starting games for the club no longer makes sense, yet his cutting edge could be of immense value as a super sub. Sergio Busquets could have a replacement in Frenkie de Jong, but directly pushing the burden on the Dutchman’s shoulders would not be wise. Gerard Piqué may have offered to step down, but one knows deep inside that there is no one ready to take on that position just yet.

“The club needs changes of all kinds because it’s not the first time this has happened to us. No one is indispensable. If new blood has to come in and the dynamic has to change, I will be the first person to leave because we have hit rock bottom. We all need to reflect on it internally and decide what is best for the club, what is the most important thing”

The change is undoubtedly needed, but it must be gradual. A phased transition would be more promising than a rushed one. The right mix of experience and youth can provide unparalleled results. Nonetheless, for this there needs to be a sense of acceptance amongst the senior players that they cannot demand to start. Their egos have never been, and will never be bigger than the club. They must acknowledge the fact that their best days at the club are now no longer.

The next season will be one of the most important ones in the shaping of the future. No longer will these heavyweights be default starters. For no longer can they demand to play the full 90 minutes. Playing second fiddle to the future of the team is nothing shameful. Their experience and mastery of their craft will be invaluable in moulding the next generation. Terminating their contracts at the moment may just be hasty.

Barcelona has really been més que un club for these players. It has been a home, a family and so much more. Club greats like Xavi Hernández, Andrés Iniesta and Carles Puyol took no shame in accepting that they would be turning into liabilities for the club. A gracious exit on their part now makes us realise their greatness and love for the club. It is indeed the end of the cycle, and time for the heavyweights now to realise the same.

It may not be feasible for the club to hold onto them past next season. Consequently, it would be chivalrous on their part to keep their egos aside and work for the club’s benefit for one last season. To help mould a generation that the coming years would thank them for.

One must remember that poor management has rendered the club in a flat economic state. The club cannot look to make luxurious signings in the coming windows. Undoubtedly, there are heavyweights that must be shipped off at the earliest. Iván Rakitić, Samuel Umtiti, Nélson Semedo are just a few of the names that are rightfully on the transfer market. Notwithstanding, maybe the likes of Piqué, Alba, Busquets and Suárez deserve one last campaign at the club they call home. It would be a small yet monumental gesture from them to put the club’s future first and pass on the baton over the course of the season.