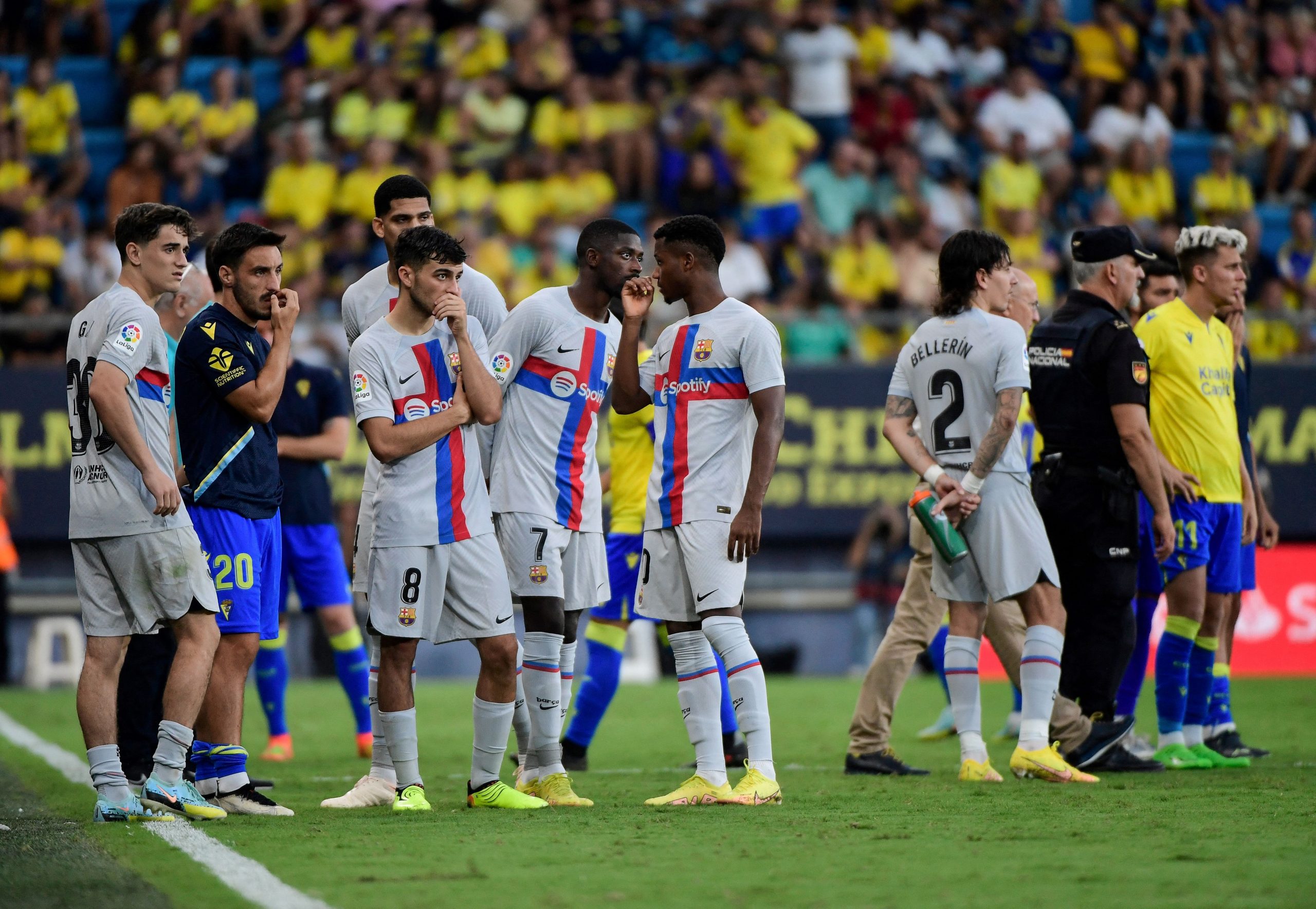 Barcelona were hoping to build on their stellar win against Viktoria Plzen tonight as they took on Cadiz away from home. Los Piratas have been Barça’s bogey team over the last two years, taking away two draws and two wins from them.

Xavi started with a heavily rotated lineup tonight, benching five starters from arguably their best starting lineup. That, coupled with the fact that Cadiz were desperately looking for their first point of the season, did not fare well in favour of the visitors.

The first half was decent, with some players – like Alejandro Balde, Pique, and Gavi standing out. However, as a whole, the team looked uncoordinated for a majority of the 90.

Barcelona took a 2-0 lead by the 65th minute courtesy of Frenkie de Jong and Robert Lewandowski, but the match was interrupted 20 minutes later due to a medical emergency in the stands.

After it was deemed serious, the game was temporarily suspended, with the players sent back to the dressing room. Eventually, the person was escorted on a stretcher, out of the stadium, after which the players were asked to resume the match.

Ter Stegen did not have to make a single shot today. More than sums up the game.

A rather clumsy debut for Bellerin, who was looked understandably shaky. Grew into the game in the second half and can definitely take credit for starting the move that led to the second goal.

Did not have an awful lot to do defensively but fared well the couple of times he did. His comfort with the ball is increasing every passing day.

Pique clearly came into the game today wanting to prove something and achieved that to a large extent. The Spaniard was faultless with his passing, and read Cadiz’s attacks well enough to keep a clean sheet.

Balde was by far and large the best player for Barcelona tonight. He was intense defensively, and never ran out of ideas in the attack. Should have won a penalty, too. Unfortunately, this is not football, it’s La Liga.

De Jong started the game well but petered out as it went on. He did break the deadlock, though, which is always an encouraging sign.

Somewhere between average and decent, not a lot can be taken away from Busi’s performance. Hopefully, his press resistance is better against Bayern, though.

Gavi has somehow taken up his intensity another notch, which nobody thought would be possible. Recovered a ton of attacks, created attacks, and messed up the Cadiz midfield both on and off the ball.

Raphinha could have gotten on the scoresheet early today, but hit his close-range shot onto the post. From there, his performance was largely topsy-turvy. A few hits and misses here and there, but more signs of promise in the second half as was heavily involved in both goals.

Memphis showed a ton of promise in the opening minutes, but eventually faded out. Needs to maintain a higher, and more consistent level of intensity.

Another very underwhelming game from Torres, who looked completely out of sync with his teammates.

An extended rest would have been nice, but watching the golden boy play is always fun. Pedri’s impact cannot be measured, but he did increase the tempo of the game by multiple notches.

Came on immediately after the goal and changed the game for good. Created three half chances, and started the move that eventually led to the

After a tame performance vs Viktoria Plzen, a goal today should do Fati a world of good.

Did not do enough to warrant a rating on his debut.