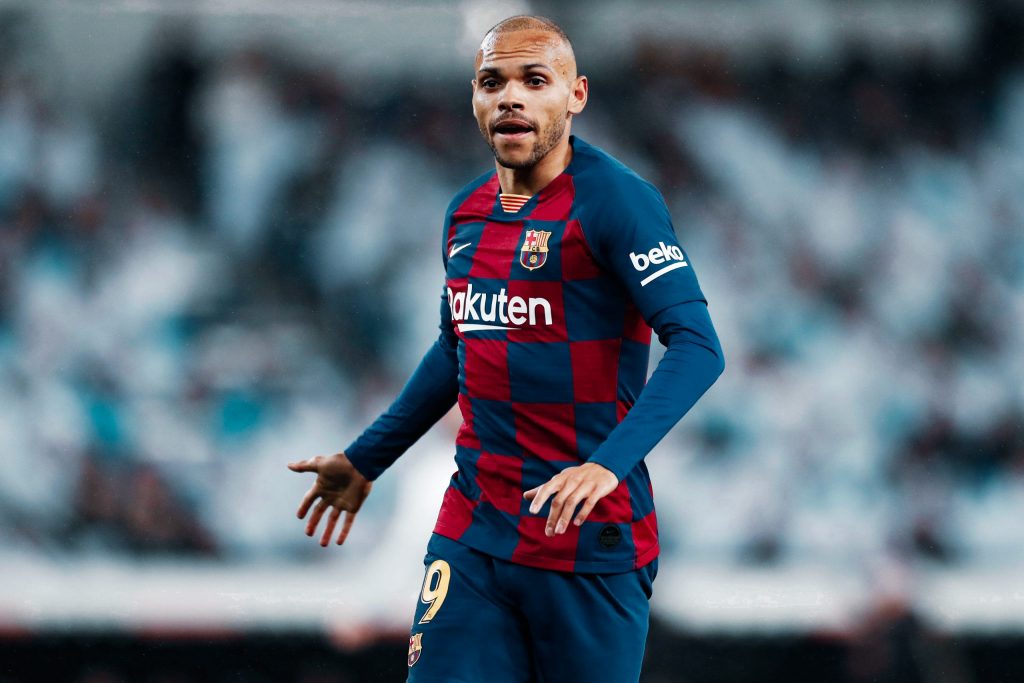 A promising start to life for Martin Braithwaite at Barça has come to a sudden halt. So what does this mean for the Dane’s future in blaugrana colours? Does he stay or move on when the market reopens?

Martin Braithwaite at Barça is not something many football followers would have envisioned happening. The Danish born striker’s career trajectory has been rather odd. After moderately good spells in the Ligue 1 at Toulouse and Bordeaux and a rather unremarkable period at Middlesbrough, Braithwaite landed in La Liga during the 2019 summer window. He signed for Leganés and was their top scorer until the winter. That was before making an astonishing move to Barcelona under extraordinary circumstances. A transfer that grabbed headlines for a multitude of reasons.

A controversial and confusing transfer

Following some rather questionable squad planning and unexpected lengthy injuries to Luis Suárez and Ousmane Dembélé, Barça had to turn to an obscure transfer market rule to make up the numbers in their overly thinned squad.

The transfer was hugely contentious because for one, it took place outside the January transfer window. A small club like Leganés were powerless since the Spanish FA authorized Barça’s approach. The Catalans paid the full €18 million release clause. However, that would not make much of a difference since Leganes were not permitted to sign a replacement. A very dodgy provision that benefited the injury struck Barça largely.

“We would understand this rule applying if there were a mutual agreement between clubs, but the current rules go against equality between clubs”
–– Leganés general director Martín Ortega

Leganés have been fighting a relegation battle. Losing 2 of their key attacking threats in Youssef En-Nesyri and Braithwaite meant times look even more bleak.

The future of Braithwaite at Barça amidst global panic

As football has come to an abrupt halt, one cannot help but wonder what it will be like for Braithwaite at Barça in the near future. Due to the coronavirus pandemic, the Danish striker’s bright start in a Barcelona shirt has come to a standstill. It is very tough to judge what Martin course Martin’s future will take. Mainly since he has only stepped onto the pitch for Barça thrice.

However, the 28-year-old seems to have brought a fresh dimension to the forward line. His incredible speed, movement and first touch has given Barça fans new hope. In the absence of Suárez and Dembélé, he has added a lot of dynamism and energy in his appearances so far.

Although due to this hugely difficult scenario with the COVID–19 pandemic, the huge period of inactivity might factor in. It might harm Braithwaite’s development. The added time for recovery that Ousmane and Suárez will get might also mean that Martin’s chances might be even more scarce. However, it looks like Braithwaite is not letting that get the best of him. The new signing seems to be working harder than ever, even in the confines of his home. He has been training hard and keeping himself in top shape to remain sharp for whenever our beloved sport resumes.

“I think that if I do something, I must give it my 100%. I love to play football. Sometimes I may not do well, but I always put passion and hard work in what I do”
–– Martin Braithwaite

With his determination and ability, Braithwaite at Barça definitely should stay for at least another season. But whether or not he will, remains to be seen. Assessing Barça’s monetary situation will be key and so will the return of players from injuries. Purely from a footballing sense, Braithwaite should be given a fair chance at Barça. But if external factors play a part, then there is a likelihood that he may leave.

What braithwaite can add to setien’s Barça
What did you think of this article?