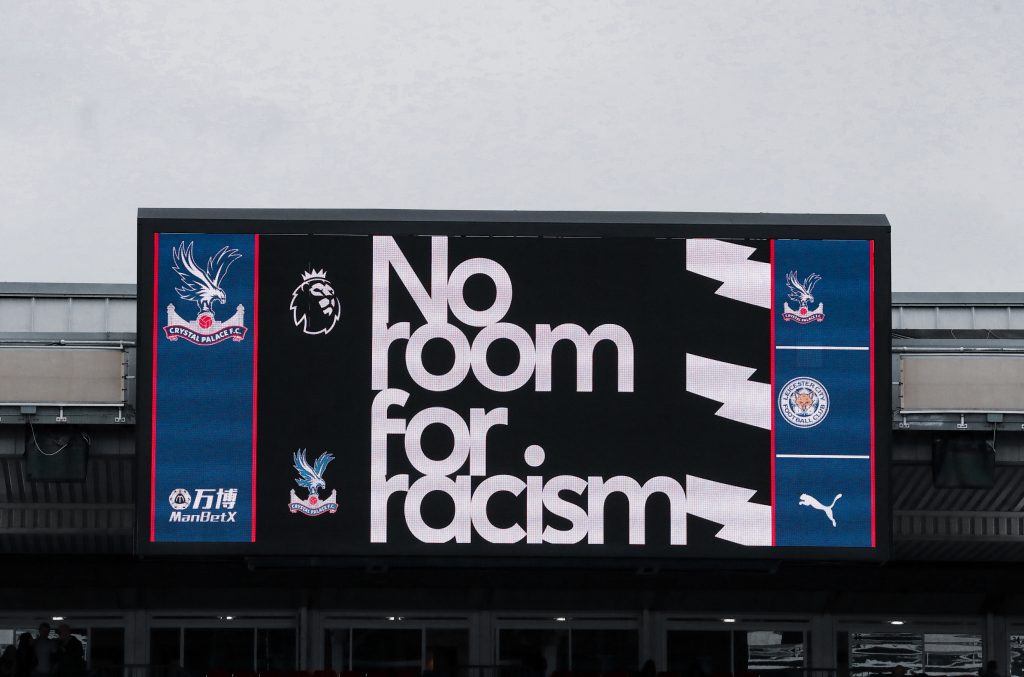 With all that is happening in the world, football is left in behind. On Blackout Tuesday, we have decided to talk about the future of football hopefully without racism and discrimination. Now and forever, black lives matter.

The world has finally woken up from the violence and hatred that comes from the nightmare that is the duality and toxicity of our societies. It is heart-warming to see all that is happening, the change in mentalities while others go out of their way to show everything that the protestor does not stand for. After all this craziness, Earth might become a more peaceful place where race, colour, religion or sexuality does not divide us but instead helps us understanding the other.

Football, a game that is played and watched by all, is no different from the discrimination that occurred in the modern era. The division is engrained in the beautiful game’s culture. Still, we, as football fans, have tried to steer clear of the illnesses that are xenophobia, racism or any form of discrimination.

Football has a dark history of discrimination, and it began with the Ballon d’Or. The coveted prize was initially given exclusively to European people, a shame for a game that thrives when everyone is united with each other. Now, more than 70 years after that rule, Europeans have dominated the trophy, and only George Weah stands in this hall of fame as an African man.

Also, one of the most significant issues in football is its openness towards everyone. Everyone, whether they are racist or not, can watch the beautiful game without any kind of restrictions and this freedom often blinds the most hurtful of haters. How many times did you hear about a player getting racially abused? It happened in every country, no matter the division.

Players like Kevin-Prince Boateng or Malcom have had to cope with racial slurs in Italy and Russia. Antonio Rüdiger had to fight for his case to get justice after Tottenham fans racially abused him. His club Chelsea aren’t so innocent, and Paris Saint-Germain fans could tell you how rude the racist Blues fans were. Over in Spain, Boixos Nois from Barcelona have also mocked black people for their colour. André Onana, the excellent Ajax Cameroonian keeper, told the press that he was close to signing for a European club, but they backed off because of his colour.

However, there was a glimmer of hope when the South African World Cup was announced. Football’s most prestigious competition took place in a country where the authoritarian racial segregation system Apartheid had done some damage, and these people knew how racism divided the human race. From this point, the beautiful game should have moved on and become more of a unit. Still, all the mentioned events happened after the World Cup 2010.

Now, ten years later, the human race has had an eye-opener concerning discrimination and football fans should finally become more aware of the people they are hurting. Football is full of racists; there was always racist players, coaches and fans, but there was still a well-received reaction towards those racists. Emre Belozoglu racial slurs towards Didier Zokora led to him being harassed by the Ivorian in their next encountered. Former Spain coach Luis Aragonés reportedly told Thierry Henry that he was black shit and then lost to France in the round of 16 of the 2006 World Cup. He also had an altercation with Patrice Evra, who shut him up by scoring a goal.

But the best reaction to ever come out of a racially abused player was the Dani Alves banana incident. The Brazilian was getting ready to take a corner for Barcelona at the Madrigal when a Villarreal fan decided to throw a banana at him. The right-back ate the banana, and the fan was banned for life. Furthermore, his actions began a movement in which Mario Balotelli, Zlatan Ibrahimović and many others participated against racism.

Currently, more than six years after the banana incident, we have to learn from everything that is happening in the world. Football is now a sport that is used to unite others, no matter their differences. We see Juventus, Barcelona or Chelsea setting up academies on Africa, the Middle East or the American continent, and it is beautiful. Seeing kids from Lebanon play along with Canadians and Ivorians to teach them unity from the youngest age is the way to go for football.

It does not do only to say that racism is a common enemy on social media, no. We must be united against it and outcast the people want to harm others mentally and physically. It does not do to support players after racist slurs just like Liverpool did after Luis Suárez called Patrice Evra a “Ni**er”. Going forward, everyone affiliated with the football world should be ashamed of what is happening in the world, and they shall try to take a stand in this fight.

The direction we have taken in football in recent years has been near perfect, we have banned racists and tried to unite the world. Netherlands’ Frenkie de Jong and Georginio Wijnaldum showed the world what unity was a few months ago and they have reminded everyone the fight we are all in. What’s pleasing to see is the fact that every club in the world has taken action, no matter their past. It is commendable to see everyone is in this fight together and have shown the way for the younger ones.

❛ Football is beautiful because whether you win, draw, or lose, you can go and shake your opponent’s hand, whether they are white or black or red or blue ❜

Football is one of the first educators in the world before teachers and just after parents. Children often look up to their idols and their favourite clubs. They wait for a whole week to see their stars in action and talk about what they have felt playing a game. Imagine the impact Mario Balotelli’s tears had when he was racially abused against Inter a few years ago. A young child would then understand that something went wrong there and it didn’t have a place in football and the world.

Ajax posted a picture of their academy youngsters and showed that no matter the colour, the origins or the religion, we should be able to teach the youngsters in their fight for unity.
Younger and older generations will surely learn from that experience and football will hopefully be bereft of all those bigots that have tried to divide the human race for so long.

• Barcelona players that benefit most from football’s break