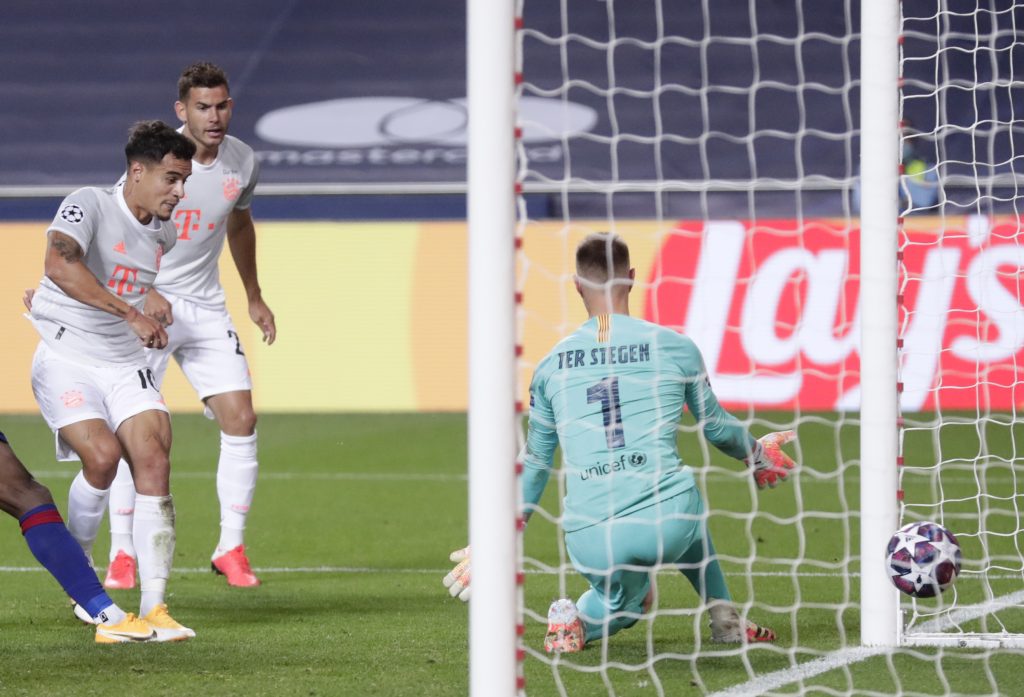 An incredible stat came by after Barça’s heaviest defeat in Europe. Philippe Coutinho, the club’s most expensive signing, costs less than the monster that is Bayern’s squad. Money never buys good football, and Bayern’s model is exactly the reason why.

Barça’s defeat against Bayern was one of the hardest ones to take. This time, the Bayern demolition couldn’t be covered with the coach’s condition and the atmosphere, it was all a series of circumstances that began in 2015, and the cataclysmic cycle ended with this defeat.

In 2015, Josep Maria Bartomeu was elected as the Catalan president, and ever since the Champions League win that same year, Barcelona’s decline has been depressive, to say the least. The most depressive point of the board’s doings has been excessive spending.

Dembélé, Coutinho, Griezmann, Suarez. All these astronomical fees for players that either have did not have great success (the former three) or are club legends (Suarez). It’s fair to say that the fees have not justified themselves in most cases. From those players, three remain at the club, and one is currently plying his trade abroad while still having a contract with the Camp Nou side.

On loan at Bayern Munich, 120 million Pounds Philippe Coutinho is close to a treble after scoring twice and assisting once in an 8-2 demolishing of his parent club.

His price tag alone is more than Bayern Munich’s entire starting eleven that night, which cost 90 million Pounds altogether. Bayern’s squad was made and not bought. Of course, many players were bought, but it was a young age, and the Bavarians nurtured them until they were ready. The epitome of this culture is David Alaba. Brought in at the youngest age, it feels like the 28-year-old has been playing for ages and nears retirement. Instead, he’s been playing since he was 18 in the Bundesliga and could have two trebles to his, and only a select few, like Messi, Eto’o, Xavi or Iniesta, have done.

Besides Alaba, it seems like Alphonso Davies is the Austrian’s reincarnation. Young, explosive full-back demonstrating his prowess from the youngest age (19) after having a minimal transfer fee.

This is what recruiting and recruiting intelligently, does. Despite having the world’s most respected academy, how many youngsters, mainly Brazilians, did Barça buy since Bartomeu and Rosell’s reigns of terror? Bayern can produce talent in two ways:

1. Their excellent academy, where German and international talents grow and become legends for club and country.

2. Buying young and making legends from scratch, with no high transfer fees, like Alaba and Davies.

It’s fitting that Lucas Hernández, Corentin Tolisso and Javi Martinez (the three most expensive signings in the Bavarians’ history) were on the bench, and the fourth (Arturo Vidal), playing for the opposite team getting battered like a kid. For Barcelona, their atrocious youngster policy has brought many problems and their brightest talent in years, Thiago Alcantara, started for the white side, being on the right side of the beating this time around.

Messi aside, the two best academy graduates on the pitch played for Bayern. First, Thiago, who is a gem and played well as mentioned. Then, Thomas Müller. Much like Alaba, the German has been playing at his best for so many years. Ever since the 2010 World Cup, where he finished close to the top scorer award, Müller has transformed into a great creator, and he piled on the misery in Lisbon with two goals and an assist. For Barça, six academy graduates. Leo Messi, who didn’t have a good game at all. Jordi Alba, abysmal in defensive phases. Gérard Piqué, a significant part of the sinking defence. Sergi Roberto, at fault for the second goal, aka the goal that changed the mentalities of both sides. Sergio Busquets, who had his worst performance as a Catalan player. Ansu Fati, one of the two bright spots of the 2019/20 season and who had a cameo to forget, not his fault at all.

With these academy players, some overpaid players grasped the pitch. It would be harsh to criticise Lenglet and Ter Stegen too much, as they have been bright spots for the past few seasons and this was undoubtedly their worst performance in a Blaugrana shirt. The two of them still deserve constructive criticism as the German’s distribution was abysmal and the Frenchman sank with the defence.

However, many players sank, along with the whole team, but some more than others. Few would criticize Suarez too much, as his goal was exquisite, but the Uruguayan did nothing, and some could argue he could’ve changed the game. Eight minutes in, Nelson Semedo gifts a superb ball to Suarez, who’s one-on-one with Manuel Neuer, and he scuffs his shot.

Suarez, a club legend who came for big bucks, missed the chance to put Barça in front and change the game forever. The first 20 minutes were Barça’s best, and while they didn’t continue on their way because of the second goal and Roberto’s mistake, Suarez and then Messi’s post spoiled the Culés’ chances. Bayern’s eleven was great, and the archetype for any team that builds from scratch.

A few years ago, Bayern were in Barça’s position. It wasn’t as dramatic, but Bayern still couldn’t match their domestic dominance with continental success under Pep, Ancelotti or Kovac. This year, they have scored 39 and only need two to equal the record set by Real Madrid of 41 goals in a Champions League campaign. And that’s with two games less than Madrid if they win the whole thing. What Bayern did was a squad rebuilding with a budget. They did it well and accommodated nobodies like Davies, Gnabry and Kimmich for them to become superstars.

Compare it to Barça, who had their three most expensive signings on the bench, and you’ll get the bigger picture. Barcelona should follow Bayern and this painful defeat might be a blessing in disguise.