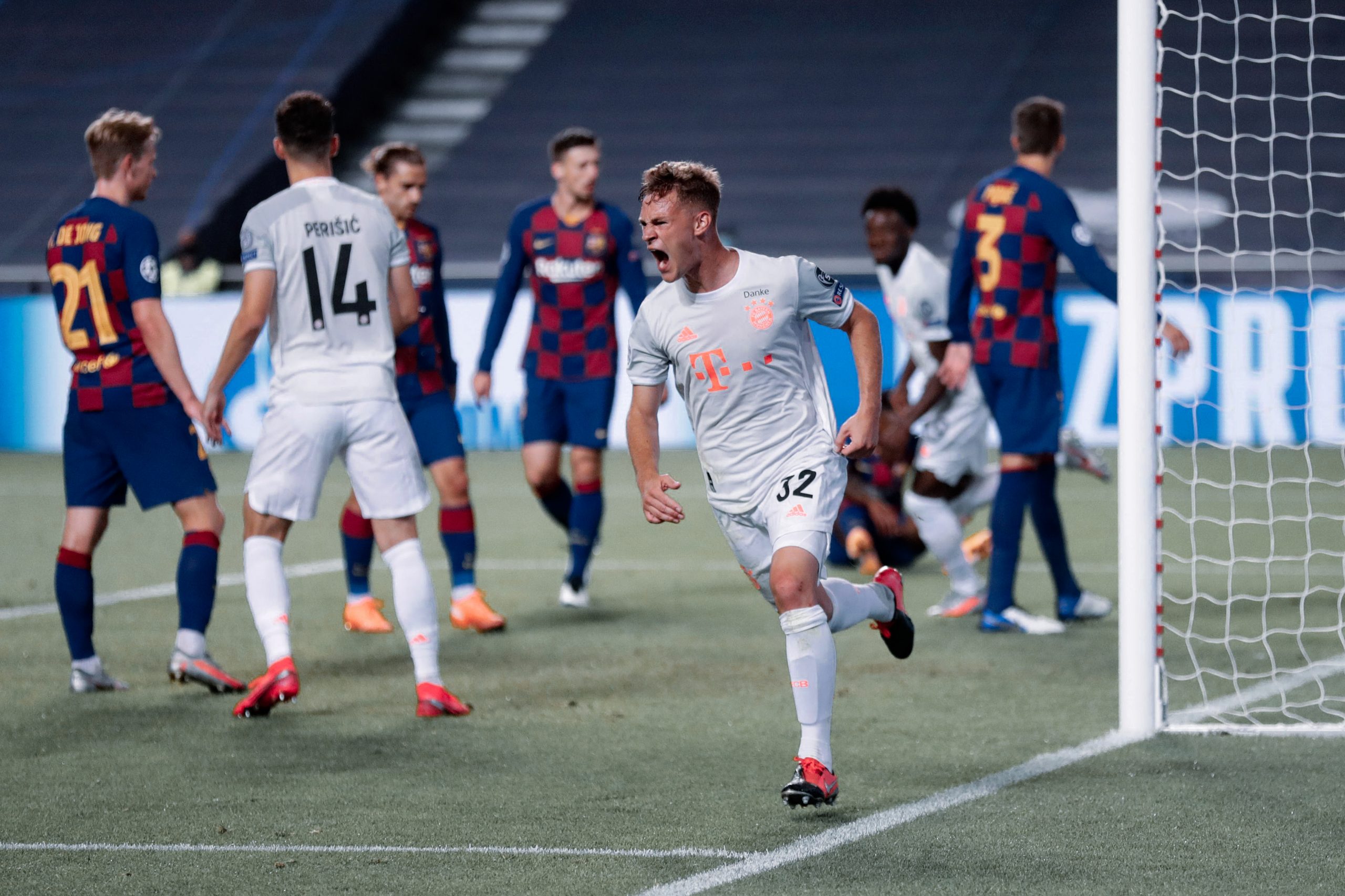 A blanket of silence covers the city of Lisbon on the night of August 14th, 2020. The COVID-19 pandemic has brought one of Europe’s most vibrant and beautiful cities to a standstill as the world continues to discover the best way to protect itself from this deadly disease.

Calmness has also settled over the Estádio da Luz, the site chosen to host UEFA’s final eight tournament in this special edition of the Champions League.

Hours before a Bavarian storm rocked the stadiums’ foundations, sweeping up one of the world’s biggest clubs in its path, a story that is now forever written in the walls of this magnificent arena.

This storm had been forecasted back to the night the draw for the quarterfinals had been made. Bayern Munich were going from strength to strength under new manager Hansi Flick, whilst Barcelona were trending in the opposite direction under their new coach, Quique Setien.

Barca fans knew it too. 3-0, 4-0 might have been expected, but what happened undoubtedly was not. It could not be, in many people’s minds. This was FC Barcelona after all, things like this do not happen to them.

Nevertheless, this is football, and no matter how much money begins to influence the game, the game itself holds no prisoners.

8-2 read the scoreboard at the Estadio da Luz. The most embarrassing night in the club’s history and the only conclusion to the work Josep Maria Bartomeu was doing throughout the years prior.

His man Ronald Koeman had the chance for revenge back in September but escaped with a 3-0 loss, thanks to Bayern’s failure to convert several chances. It was the beginning of the end for the Dutchman, paving the way for the return of a Barcelona legend, Xavi.

Two months on, the German side have kicked on to become arguably the best side in Europe, whilst Barca continues to try and find their place within European football, having fallen from the dizzying heights they once obtained.

The upcoming tie with the Bavarian giants seems insurmountable at present but at the very least provides Xavi with the perfect measuring stick, as it will signify just how far behind Europe’s best Barcelona are. This is valuable information for Xavi in the early days of his era as manager, the first step in his plan to regain the throne Bayern Munich currently sit on.

Thomas Muller gave us all an insight into the mindset of Bayern Munich in the days leading up to his side’s clash with Barcelona:

“We’re really keen to play them, all of us are eager for that game to come around… Barça are not the Spanish champions, but in a one-off game against those footballers…anything can happen”.

Muller, modest as ever, gave the Catalan side their respect, but the first sentence showed a dropping of the guard, a hint of his confidence. That squad knew how good they were, they knew Barcelona could not win this; the game itself showed this, they brimmed with confidence.

Bayern believed in themselves, and their players believed every word they said throughout the week.

Then there was Arturo Vidal, who claimed his former team would be facing “the best team in the world” that Friday. A lie the Chilean told himself, papering over the cracks to hide the truth – something Quique Seiten’s predecessor Ernesto Valverde did so well for this Barca side.

Once the game started, there would be no hiding. Four minutes is all it took to open the scoring. Muller, the man to give the Bavarian side the lead. Barcelona equalised through a David Alaba own goal, the only bit of luck they would have over a gruelling 90 minutes.

From here, you could see how much Bayern believed in themselves. Hansi Flick’s men played very high up the pitch, knowing Barca’s lack of pace would be part of their downfall. The men in garnet and blue found space behind the defence on occasions, but once that was fixed, it was game over.

Two, three, and four would come within a ten-minute window; the hypothetical game over was now a reality.

Luis Suarez pulled one back for the Catalan side with a smart move, but that only made the Bavarian giants angrier. Joshua Kimmich scored five, Robert Lewandowski nodded home six, but the embarrassment hadn’t even peaked yet.

Josep Maria Bartomeu’s biggest signing was about to get on the scoresheet, the stage where he was supposed to shine.

It was seven and eight that Barça’s record signing Philippe Coutinho would add for his new teammates in the red of Munich. Another example of how far the Catalan side had fallen, another horror chapter in the shambolic story of Bartomeu.

It was Barcelona’s first defeat by a six-goal margin since a 6-0 loss to city rivals Espanyol in 1951. Their first concession of eight in a match since an 8-0 defeat to Sevilla in 1946. A complete and utter humiliation all around, a moment that will forever be part of both clubs’ long histories.

12 months later, both clubs’ histories would become entwined again, as the Champions League group stage draw pitted both together in group E.

Memories of Lisbon would begin to resurface amongst Barcelona fans, but just like now, it provided them with the perfect chance to see how far Barca have come under Ronald Koeman and how far off Europe’s best teams the Catalan side are.

Bayern Munich had been through some significant changes since the sides last met: Julian Nagelsmann is now head coach, Herbert Hainer is the president, legendary goalkeeper Oliver Khan is CEO, whilst players such as David Alaba, Jerome Boateng, Thiago Alcántara, Ivan Perisic, and Philippe Coutinho are not at the club anymore.

Barcelona have gone through some major changes of their own. Ronald Koeman has come after Quique Setien and gone while Joan Laporta and his board now run the club. Players such as Luis Suarez, Antoine Griezmann and most importantly, Lionel Messi are no longer donning the St. George’s cross.

Despite all this, the narrative of how this tie was supposed to go had not changed. Barcelona were expected to be beaten well, and that’s how it played out.

The night concluded at 3-0 to the German Champions, but even that margin flattered Koeman’s side. The Catalan side were dominated for 90 minutes, with every positive stat falling in the German’s favour. Rarely, Barcelona are out possessed and out passed at the Camp Nou, or any stadium, to be frank, but this night was one of those occasions.

It was destined to happen from the get-go, as Koeman’s antagonistic approach to the tie with a defensive back five was always going to fail, as Bayern always find a way to get through. Quick attacking transitions were an impossible request with Luuk de Jong leading the line – a tactic that reportedly left President Joan Laporta bemused and angry after the final whistle.

Barcelona did hold out for 34 minutes until a deflected Thomas Muller shot left Marc-Andre ter Stegen stranded for that inevitable opening goal. A Robert Lewandowski brace in the second half brought the score to three, a result that left Laporta once again calling the fans to have patience.

That patience was tested when Barcelona were beaten convincingly by Benfica in the second group stage match before back-to-back wins over Dynamo Kyiv gave the Catalan side a lifeline in this season’s competition.

That lifeline is now hanging by a thread following the scoreless draw with Benfica on matchday five, leaving Xavi and co. needing a result at the Allianz Arena – an almost impossible task.

On paper, it seems simple, win and Barcelona go through. Winning in the Bavaria region of Germany is nearly always a certainty, but it is an exclusive club that is only open for those who follow Bayern Munich. Now and again, an outsider such as Eintracht Frankfurt recently breaks in, but those occasions are anomalies across the course of a season.

New manager Julian Nagelsmann has turned this Bayern squad into bigger killers than they already were before and has his side playing with a brutality that eclipses everyone else in Europe at present.

Their dominance is highlighted further with their possession stats for the season, having been out possessed in just one game against RB Leipzig across 21 matches in all competitions – whilst averaging a total of 63% possession per game for the season.

This Bayern team is remarkable at their very best, but they have hit a bit of a bump of late. Nevertheless, this is an arduous task for Xavi to overcome in the early days of his Barcelona reign, and how he goes about it remains to be seen.

The Barça legend has lost one game in his opening four games, that too 0-1 against Real Betis. No one should expect any more than that as of now, but this tie with Bayern provides him with the perfect measuring stick to see how far off Europe’s best his side are.

This could be valuable information to have in the long run, but as of now, the harsh reality is there is little to no chance of the Blaugrana getting a result in Bavaria should Nagelsmann side play anywhere near their best football.

Although Bayern are through to the next round, it is expected that they will play close enough to their full-strength side because that is essentially the Bayern Munich way – evident in the last match against Dynamo Kyiv.

It is not a club known for handing out favours. Julian Nagelsmann will line his best team up, and it will be seen as an opportunity for Robert Lewandowski to add to his Champions League tally as he goes in search of breaking Cristiano Ronaldo’s record for most goals in a single Champions League campaign.

As for Barcelona, their downfall will ultimately be their defence, which is simply not good enough to keep the Bavarian giants and their superstar striker out. Even at the other end of the pitch, will Barça have the ruthlessness in front of the goal when an opportunity does arise? Recent outings point towards no, with the likes of Memphis Depay squandering opportunities of late.

All in all, this seems like an impossible task with the odds heavily stacked against Barcelona and Xavi. It is tough to even make some sort of a case for Barça on how they win this match because out of all the teams in Europe, the Catalan side could face in order to make the next round, Bayern are certainly the worst.

Barcelona’s best chance is that Dynamo Kyiv do them a massive favour by stopping Benfica, but if that is not the case, Xavi needs to find a way to give his side just a chance.

If he does somehow pull this off, it would be nothing short of remarkable, and you could probably put it up there with one of the best achievements of his stellar football career because this Bayern team are unforgiving monsters, whilst Barça are nothing of the sort.