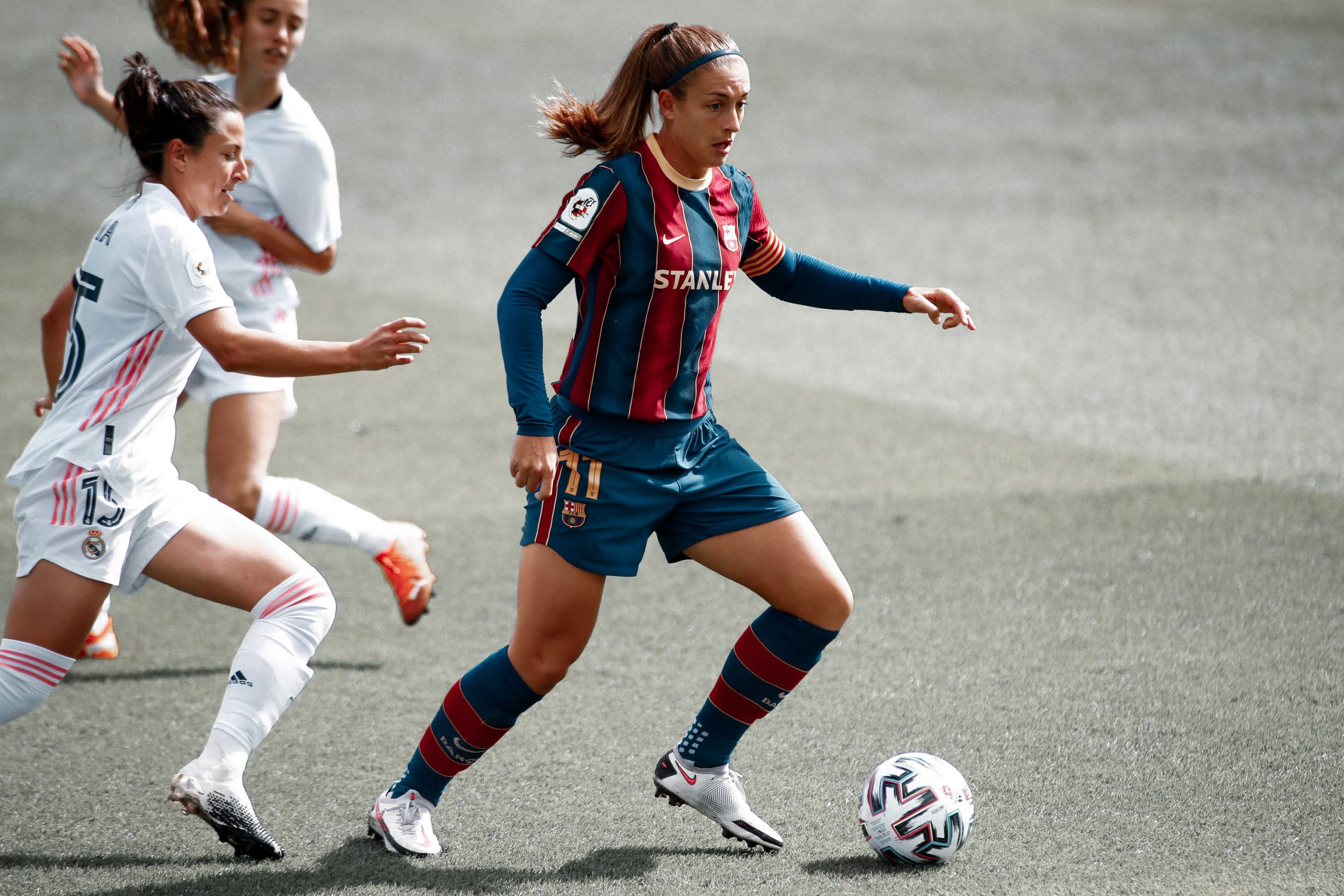 Alexia Putellas has been performing as possibly the best midfielder in the world in the past months, but in October she rose to a different level as the best player of the month for Barça Femení.

Upon beginning the 2020/21 season, Barça Femení have started off their campaign flawlessly in both the league and the Copa de la Reina. Aside from all four of their matches being victories, they have completely and utterly dominated their competition with 22 goals scored and zero conceded. Every individual player has done their part in contributing to this dominance, but the team has taken such a commanding lead largely due to the consistent, near-perfect performances from our October Player of the Month, Alexia Putellas.

2020 has already been a huge breakout year on an individual level for the midfielder. The entire year, she has been playing the best football of her life for both club and country. October, in particular, has been her best month of 2020 from a statistics standpoint: she has 3 goals and 3 assists in four games. We will be looking at a match-by-match analysis that breaks down her scoring, passing, movement, and all the other elements that have made this October such a successful month for her.

Alexia bagged 3 goals in 3 Primera Iberdrola games in October for Barça Femení, while also scoring a goal and assisting another for the Spanish National Team last Friday. The Catalan playmaker is completely on fire in every game she plays in and arguably claiming to be the best midfielder in the world right now.

The defending champions started their new season in style by winning 4–0 against the newly-established Real Madrid Femenino, formerly known as CD Tacón. Similarly to last year’s season opener, Alexia Putellas was once again the protagonist against Los Blancos with both a goal and an assist.

Alexia’s first direct goal involvement of the season was assisting Barça’s first-ever goal in the women’s Clásico. Alexia waited towards the corner of the box to send in a through ball to Patri Guijarro, who then scored on the edge of the box to find the back of the net for the first time in the historic fixture.

In the 20th minute, she pulled the trigger from the edge of the box with a rocket of a shot that would’ve surely lengthened Barcelona’s lead if not for an equally outstanding save from Misa Rodríguez. She then unlocked the defence yet again with a defence-splitting pass to Marta Torrejón in the 22nd minute, but the latter missed scoring from point-blank range. Alexia created all sorts of danger for Real Madrid Femenino. She rounded off her excellent performance with a well-deserved goal in the 75th minute. Alexia preyed around the box and slid the ball past Misa after a pinpoint cross from Caroline Graham Hansen to make it 0–3.

Against Real Madrid, most of Barça’s attacks came through the left (6 shots), which indicates that Alexia was one of the key players in terms of chance creation. In addition to that, she completed 3 successful dribbles along with as many shots on target. Alexia started off her season with an excellent game, setting a precedent for her performances later in the month.

After playing the full 90 minutes against Madrid, Alexia started the Copa de la Reina semi-final encounter with Sevilla. The Catalan was once again the catalyst for the team and spent her 63 minutes moving forward, breaking lines, and being a constant threat on the pitch.

It didn’t take Alexia long to find herself on the scoresheet yet again when she assisted a Caroline Graham Hansen goal in the 18th minute. After Patri stole the ball back from a Sevilla defender, Alexia moved away from pressure and sent a perfectly weighted, line-breaking diagonal pass to Caroline Graham Hansen who was just outside the box. Graham Hansen performed an elegant dribble move past three defenders and slotted the ball into the back of the net.

Alexia’s vision was again in full effect when she sent a no-look through ball in the way of Caroline Graham Hansen, who rounded up Barça’s second goal. Again, in the 25th minute, when Barça countered Sevilla following a corner, Alexia got into the box as a centre-forward ahead of Asisat Oshoala. However, Caroline Graham Hansen picked out Torrejón, who put the ball wide of the right side of the post. These two plays demonstrate their chemistry with each other. Alexia’s connection with Graham Hasen – arguably Barcelona’s first or second-best player – has been crucial in goal creation and attacking momentum this season.

Along with being pivotal in playmaking, Alexia showed herself to be more prone to getting in the box and looking for scoring opportunities. This match is yet another example of Alexia being an all-around player in build-up, goal creation, and goalscoring.

Alexia Putellas was on the bench against Logroño to make way for captain Vicky Losada, who got her first start of the season in this match. Barcelona were cruising past the opponents with a scoreline of 4–0 when Alexia was subbed in for Vicky in the 67th minute. Alexia widened Barca’s lead when she scored their fifth goal out of six, a strike from within the box after a swift buildup sequence.

Barcelona’s fifth goal was a fluid, well-worked goal involving 8 players with 9 passes between them. Alexia was positioned in the midfield leading up to the goal, always keeping herself open for a pass. When the ball advanced upfield thanks to an excellent dribble from Jana Fernández, Alexia started to make a run up the centre. No player marked her entry into the box because the focus stayed on Graham Hansen, and Alexia timed her run perfectly and slotted in neatly between the two centre-backs to find the ball and score.

In addition to Alexia’s goal, Vicky bagged one of her own and Aitana scored a brace. Since the loss against Wolfsburg, the midfielders have been getting into the box to contribute to scoring much more often. It became clear in the Women’s Champions League semi-final that the team had poor effectiveness in front of goal, and thankfully, almost every player seems to be making progress in that regard. Alexia particularly is leading by example with a refined finishing technique and an increased proclivity to get into the box.

Barça Femení visited a notoriously difficult ground in La Orden to face Huelva on Matchday 3. Alexia started the match and was once again crucial to Barca’s win by scoring a goal and assisting another during her fine display.

Alexia frequently advanced into the box in the first half of the game, switching positions with Lieke Martens on the left side of the pitch. In the photo below, Alexia sends in a perfectly timed through ball, dissecting the defence for Martens. However, Martens’ first touch was a bit heavy and the defence took care of it quickly.

At the 39th minute, Alexia picked the ball on the left of the pitch, dribbled past a player, settled towards the end of the box, and sent a long-range lob shot that chipped the keeper on its way into the net. This goal took serious technical skill to finish off and is probably one of the best goals of her career. Alexia is becoming even more lethal inside the box than she used to be, and given how clinical she’s been from both long and short-range, she could be on track to beat her single-season league goal record of 16.

During the build-up, Alexia’s positioning and link-up play with Mapi León were crucial again in Barcelona’s success. She got herself in between players and constantly asked for the ball to break the defensive structure of the opponent. Alexia once again found her name on the stat sheet with her assist to Bruna Vilamala, who scored her first senior-team goal in the 78th minute. This was another well-worked team goal with 15 touches involving 8 Barça players. The sequence ended when Alexia shook off her defender and sent in the assisting pass straight to Bruna Vilamala’s feet.

In addition to her performances with Barcelona, Alexia put up yet another stellar performance for the Spanish national team with a ridiculous volley goal and an assist to cap off one of the finest months of her career. Alexia has already been having a phenomenal 2020, but consistent, dominating performances like those we saw this month only solidify her reputation as one of the best players in the world with unlimited potential to get even better.