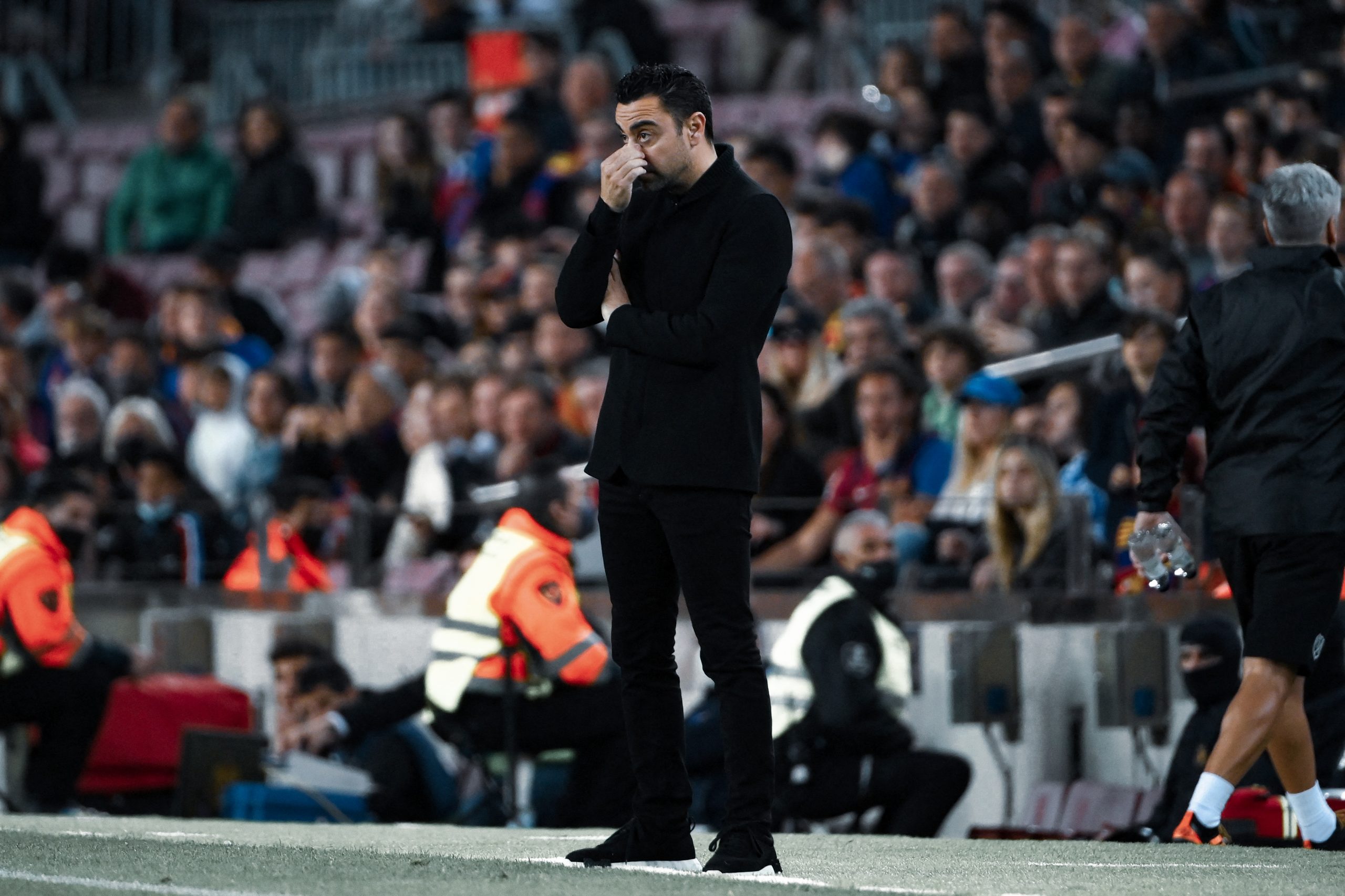 The stage was set for a big night. Cules were ready to cheer on their team, hoping for another step toward European glory. But just two minutes after kick-off, a feeling of deja-vu began to creep in.

By the end of the ninety, the familiar feeling of disappointment and stench of failure crept in once more.

After showing such incredible progress over the last few months, Xavi’s side failed to get past Frankfurt at the Camp Nou.

Five days later, further disappointment added to Barca’s misery with a damning home loss to Cadiz, followed by another frustrating defeat to Rayo Vallecano, to all but hand the league title to rivals Real Madrid.

Naturally, fears of a collapse mirroring the one under Koeman are to be expected. However, are the losses enough to warrant doubting Xavi?

Consistent inconsistency, a hallmark of the past

Before diving into Xavi’s team, we need to understand what went wrong at Barcelona in previous years. Ageing players, horrendous management, and fitness issues have marred the last 3 seasons at FC Barcelona.

Three managerial changes and countless unnecessary signings later, Barcelona were even worse off than before. The club’s economic crisis also limited its ability to purchase players once Xavi was brought in.

However, throughout this period of instability, one factor remained consistent: a lack of a coherent identity. While Ernesto Valverde brought results, the team has been a disjointed mess ever since he took over at the helm.

The lions who took the world by storm under Pep Guardiola slowly became tamed cats under managers like Quique Setien and Ronald Koeman. Individual prowess reigned supreme, and the concept of a team was all but destroyed.

Rather than developing players around a system, the system was developed around the players.

While this ideology won the occasional game or two, it failed to bring results over the course of a season. By the end of the Koeman era, expectations had dropped from winning trophies to simply winning big league games.

Xavi’s arrival brought about a change in this mindset. Barcelona was cruising to victories with the forward line finally gelling together. Even the defence was improving, and confidence oozed through the veins of players.

Considering that Xavi started his reign without Barcelona’s greatest ever player, his work becomes all the more impressive.

Another important difference between Xavi and any of his predecessors comes down to two words: Lionel Messi. It is unfair to make any judgments, let alone so prematurely, without considering the absence of the greatest player of all time.

His move has repercussions that will be felt even a year after his departure. One cannot help but wonder whether the Blaugrana would have lost to Cadiz or Rayo if they still had Messi’s services.

When the going got tough, Messi was almost always on hand to bail Barca out. The Argentinian finished his last league campaign as a Barca player with 30 goals and 9 assists, a tally unfathomable for anyone in the current Barcelona squad.

The closest anyone gets to Messi today is Memphis Depay with 10 goals and two assists or Ousmane Dembele with a goal and 11 assists in the league.

In comparison, Benzema has managed to come up trumps to help Madrid out of a tight spot numerous times this season with a staggering tally of 25 goals and 11 assists. These performances spell the difference between victory and defeat, and the league table speaks for itself.

There is a fine line between having match-winning players and becoming over-reliant on a player. However, Barcelona fell on neither side, which has proven to be the team’s Achilles heel. But even beyond goals, the absence of key players through injury has only added to the team’s woes.

An unbalanced squad riddled with injuries and fatigue

Xavi has managed to rejuvenate veterans such as Sergio Busquets. However, nowhere is this more true than in the case of Gerard Pique.

The 35-year-old is a rock at the back for Barcelona. Despite the occasional slip-ups, he and Ronald Araujo form Barcelona’s best backline.

It is no coincidence, then, that Barcelona’s defensive collapses happen to often coincide with Pique’s absence. He is a marshall for the backline, and youngsters like Eric Garcia still have a lot to learn.

The fullbacks follow a similar pattern. As seen with Dani Alves and Jordi Alba against Real Sociedad, Xavi prefers an inverted fullback system with the wingers providing width.

However, the legendary pair are no longer the runners they used to be. They can no longer cover the entire pitch, aiding in both the offence and defence.

At this point, rotations become essential. Unfortunately for Xavi, Sergino Dest happened to be recovering from an injury, while Alba did not even have a replacement. There are no options to choose from.

Clearly, burning out is still an issue for the team. Although fitness levels have improved, the rigorous pressing demanded by Xavi requires more effort.

Xavi’s win percentage was a cause for concern for fans. His 53.33% of wins is lower than Koeman’s 58.21% and is the lowest percentage since Charly Rexach.

However, if one wants to look at statistics, the entire picture needs to be looked at, and not just one particular field. Xavi’s first month at the club was spent piecing together the broken remains of Koeman’s Barcelona.

If one only considers his stats since January, Xavi has won 60.87% of his games, while also going on a 15-game unbeaten run in the league.

Moreover, several players have seen an exponential increase in form under Xavi. Ousmane Dembele has gone into the double figures in assists for the first time in his Barcelona career and is just one shy of his career-best tally.

In fact, his expected assists per 90 is the highest in the top five leagues at 0.56.

Another man on his way toward redemption is Marc-Andre ter Stegen. The German’s PSxG, which is a measure of the expected goals based on the likeliness of a keeper to save a shot, is greater than the number of goals allowed for the first time since the 2018-19 season. This is a step in the right direction.

Pierre-Emerick Aubemayang has also blossomed under Xavi. The Arsenal castaway has been in scintillating form, and his 9 goals in 11 have been crucial in the team’s success. Ferran Torres and Pedri are also proving to be vital to the team dynamics.

The amount of talent in Barcelona’s midfield is incredible. Important steps are being taken to restore the faith in La Masia so it can make Barcelona competitive again, but also sustainable.

As time passes, Xavi is slowly bringing more and more out of his players. Many of them are regaining their form, and with another transfer window at his disposal, the Spaniard may well create a world-class side.

“Patience is essential” and “trust the process” have become cliches by this point. However, Barcelona’s recent results have not told the whole story. The Blaugrana are slowly developing an identity for themselves.

Built on the foundation of Johan Cruyff and Pep Guardiola, Xavi is adding his own flair to create a promising Barcelona side capable of challenging the best teams in the world.

Ignoring 30 games worth of hard work based on three games is unjust toward Xavi. After years of instability, Barcelona are finally finding their voice. The players are behind their coach, and it is time that fans put faith in the manager as well.