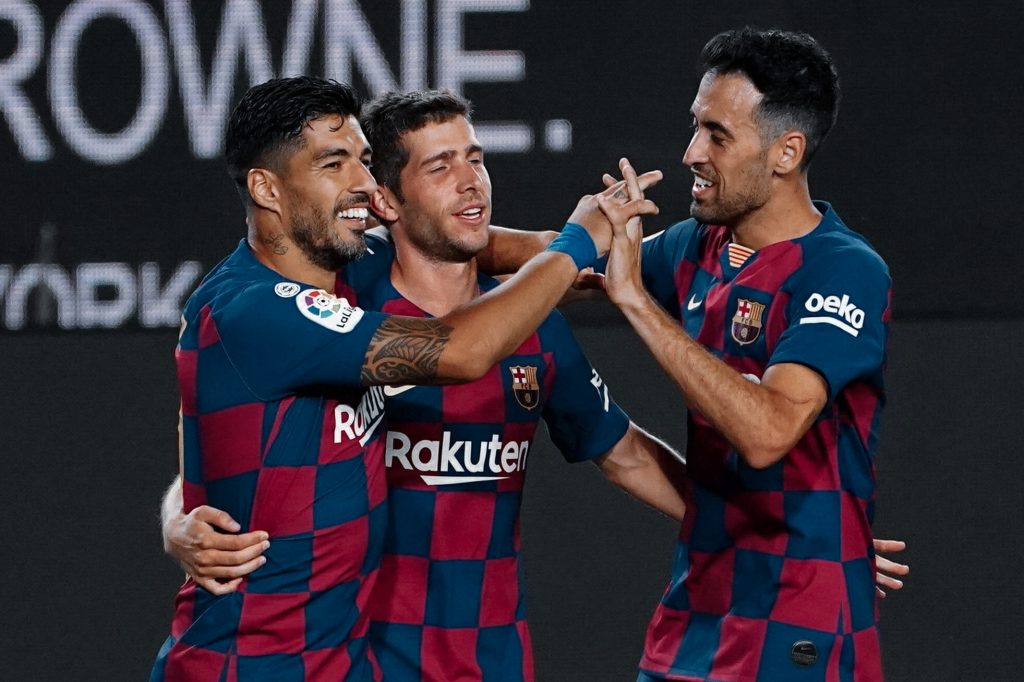 The penultimate game of the La Liga campaign is upon us. Barça still sit four points behind leaders Real Madrid, in a title race which seems to be over realistically. However, the Catalans need to win every game to at least keep the point difference intact. Here’s the preview of the match between Barcelona and Osasuna.

Although mathematically not done yet, Real Madrid more or less have the La Liga trophy in the bag. They are four points ahead, and a win or one Barcelona slip away from sealing the championship this matchday. With nothing in their hands at the moment, Barça can only hope to win the two remaining games, and make sure to pick up some form for the impending Champions League clash against Napoli on August 8.

During the visit to Real Valladolid last matchday, Quique Setién and Barcelona showed some improvisation and tactical flexibility in the first half. Setién started with the system he implemented when he joined, with a back three and Sergi Roberto as a false right centre-back, but soon went back to the regular formation once Antoine Griezmann got injured at half-time. Valladolid bettered their gameplan and grew into the game to make things difficult for Barça, but the visitors scraped through for a one-nil victory.

Aged 16, Ansu Fati scored his first Barcelona goal in a 2–2 draw against Osasuna earlier this season | Photo by Jess Diges via Imago

Now, Barcelona turn hosts as Osasuna visit the Camp Nou on Thursday night. Of the three clubs which got the promotion last term, Granada and Osasuna have positioned themselves very well in the middle of the table, much to everyone’s surprise. With a win, the visitors could even step into the top half of the table. In the reverse fixture, the blaugranas drew 2–2 at El Sadar, with midfielder Arthur Melo coming off the bench to bring some life into the game. Now, at the Camp Nou, with a better and fit squad, the result might not be the same.

Barcelona have shown glimpses of brilliance over the last few fixtures, but have not stamped their authority yet. With the 3–5–2 system during the opening moments of the Valladolid, the players were very mobile and often found themselves in attacking zones. Barça successfully evaded the press and were creating excellent chances. Right-back Nélson Semedo got the free attacking role he craved and shone brightly till the change of system. Even with the deep defence, Barça were able to break lines and get into dangerous zones.

Due to the injury to Antoine Griezmann and change in the system for Pucela, Barça switched to their usual system. They lost their bright attacking energy and dropped to defend the relentless attack of the hosts. What seemed like an easy win, ended up being a scraping one-nil victory. This time around, the Catalans’ squad is much better, as Frenkie de Jong, Arthur Melo and Ansu Fati return for contention.

The comeback of the Dutchman is especially exciting as he could play in the hybrid centre-back / midfielder role Sergi Roberto has been taking up recently. He occupied a similar position in Ajax, and the culés could finally see him in full strength. However, it is unlikely that he will start the game, but could see some minutes for sure. Ansu Fati returns from suspension and fills the void of an injured Griezmann.

If Quique Setién feels that the 3–5–2 is the way to go with no proper wingers, then he should make the team comfortable with the system before the all-important Champions League duel. Fixing his best eleven is necessary while competing in knockout tournaments. Even though the La Liga title is out of reach, the season is far from over, and he must prepare the team for the same.

Having been relegated to the second tier of Spanish football in the 2016/17 season, Osasuna fought their way back to the top division as Segunda champions. Jagoba Arrasate got the reins of the team in June 2018 and successfully steered them back to La Liga last campaign. This term not only have they successfully stayed up, but they have also kept themselves well clear of the drop zone with a possible top ten finish.

“Regardless of what happens in these two matches, the season will have been very good, but it is true that tomorrow we have the opportunity to put the cherry on top of the cake”

Osasuna are a tricky side to face in La Liga. They play with a lot of heart and defend with all their men. While they prefer to play without the ball, they are no slouches on it. With a squad with considerably height advantage, they tend to stretch the defences using their width and put in dangerous crosses into the box. With attackers like Chimy Ávila, Roberto Torres and Rubén García, they are not afraid to have a go at the goal from range.

“All that’s obtaining points will be a surprise”

Jagoba Arrasate
on Osasuna’s chances in the game against Barcelona

However, for this encounter, Osasuna miss almost half a dozen of players due to injury, which includes Chimy Ávila, their top scorer but who is recovering from a cruciate ligament tar. Alongside him, Marc Cordona, Robert Ibáñez, Unai García and Rubén García get sidelined too. Former Barça B winger or striker José Arnáiz, having scored his first goal for Los Rojillos in extra time in a 2–1 win over Celta de Vigo on the weekend, could start versus his previous club. The manager Arrasate is known to switch personnel and formations and could go with a back five against Barcelona.

“The fatigue is taking a toll on us and the players are saturated, which is normal because there are many encounters in few days”

Osasuna will have some key absences at the Camp Nou, as has been the case in recent weeks | Photo by David Ramos via Getty Images

The La Liga season is about to come to an end, and Barcelona’s eternal rivals might lift the trophy in this same matchday. There are little to no consequences for the result of this match, but Barça must not take it lightly and win at all costs. Quique Setién cannot take the visitors easily and must bring his A-game during the match to get a dominating triumph. The writer’s prediction for the game: 3–0 for the Catalans.