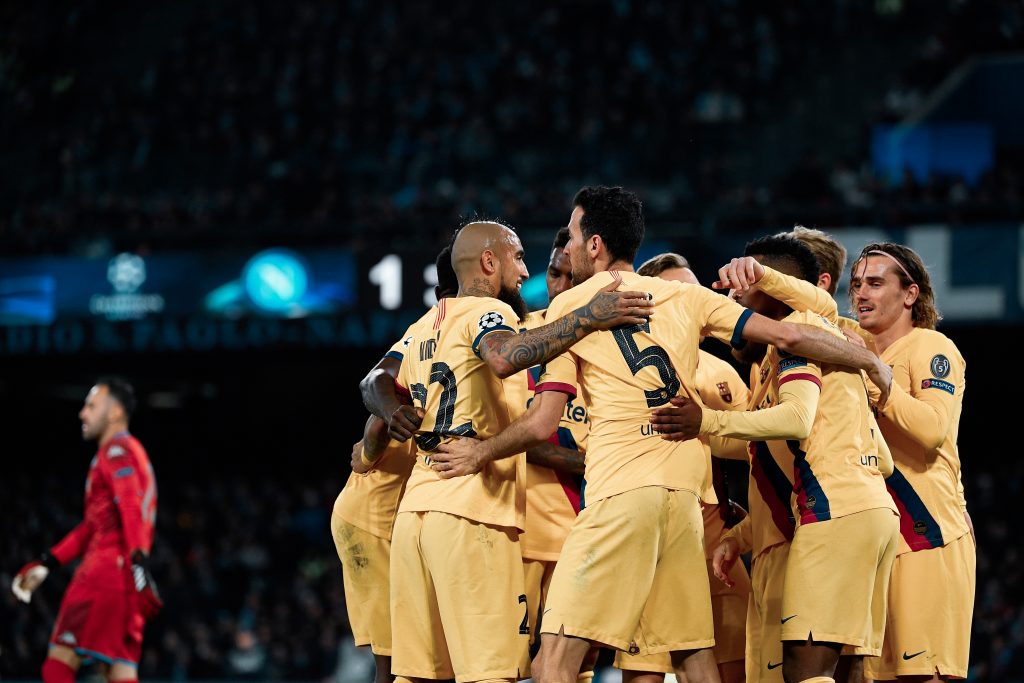 With all still to play for in the Barcelona vs Napoli, after a 1–1 draw in the first leg, the game promises to be a tense encounter. Both teams have had disappointing league campaigns and will be looking to end the season with a strong run in the Champions League. Therefore, what should Barҫa be looking to change from the initial meeting between the two teams?

Neither Barcelona nor Napoli has hit the standards that their fans have come to expect from them this season. The Catalan giants struggled to put in consistent performances and often looked void of ideas in creating chances. Napoli too ended their campaign 7th in Serie A, a poor finish for the squad at their disposal.

After more than five months, both teams will now meet again for the second leg of the Champions League last 16. At the San Paolo Stadium in February, a cagey 1–1 draw was played out. The blaugranas lacked clarity on how to break down Napoli’s well organised low block. With the return game scheduled on Saturday 8th August, Barҫa do have the away goal advantage. However, Quique Setién will be looking for a better performance this time around, especially with an on form Bayern Munich almost confirmed for the next round.

The first leg on Barcelona vs Napoli was slightly disappointing in quality attacking football. Both of these sides have played some of the best free flowing football over the last decade. It seems though that this season the Spanish side has lost their spark and that clinical instinct. On the other hand, Napoli played a defensive low block that they do not normally use. Nevertheless, it was probably a clever choice from coach Gennaro Gattuso as so often this season the five-time European champions have struggled to unlock teams that play this style.

Napoli got the lead first at the Estadio San Paolo, which would be a dangerous scenario if it happened again at the Camp Nou | Photo by Michael Steele via Getty Images

A fantastic strike from outside of the box from Dries Mertens after 29 minutes gave the Italian side the lead. One poor touch from Junior Firpo led to the goal and highlighted just how dangerous Napoli can be when given a chance. The Barҫa players must remain focused throughout the full game as any mistake could be punished. In the 57th minute, Antoine Griezmann was the man to equalise through an assist from Nélson Semedo. A special mention for Sergio Busquets too for his defence splitting pass through to the Portuguese full-back.

What needs to change?

For the return leg of Barcelona vs Napoli, there are a number of changes that Quique Setién should try and make. Though his team are technically ahead by away goals, this does not mean they can sit back. The home team must look for more goals to secure the tie. It is likely that Gli Azzurri will start with a low block and look to counter Barcelona. If they need a goal later on then the game may open up and allow more space for Lionel Messi and others to attack.

“We know it’s going to be a very difficult game, but if you prepare for it, then you never know what can happen”

Others must take responsibility, either with the creativity or goalscoring. The captain cannot continue to do both. It is rumoured that Setién has told the number 10 to stay closer to the goals and not be so involved in the build-up play. This means the midfielders have to find Messi in dangerous positions and create space for him.

This leads onto the next important change that is needed, the line-up. With Sergio Busquets and Arturo Vidal suspended, and Arthur Melo not available, the midfield is short on options. Frenkie de Jong has returned from injury and will hopefully bring some much needed energy to the midfield. Notwithstanding, it is Riqui Puig that is the most essential player that needs to start for Barcelona in this encounter. When given the chance he has always excelled. His desire, positioning, ball progression and passing are all vital for the Spanish side. Currently, he deserves a starting role in midfield more than any other player.

The second leg of the Barcelona vs Napoli will be an exciting clash. Both teams will be desperate to progress deeper into the competition. The azulgranas have had a lot of time to improve since the first leg but not much has changed in terms of their performances. They still lack that creativity and struggle to open teams up the sit in a low block.

Though the Italians have not had the best of seasons in their league they are still a dangerous side. Any mistakes are more often than not punished on nights like these. Barcelona side must up their tempo and passing if they are to have any chance in the Champions League this season.