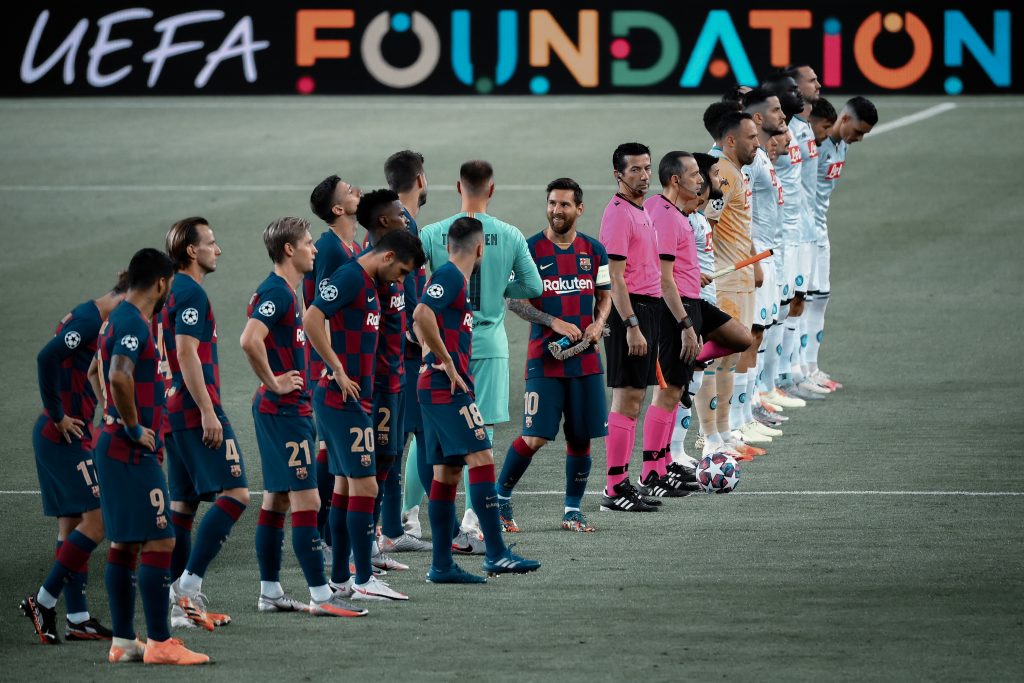 On Saturday 8th August, Barcelona vs Napoli always promised to be a tense game. Though the blaugranas went through 4–2 on aggregate, a poor second half left a lot of culés uncertain about progressing further into the competition. In the next round, Barça will face an impressive Bayern side and will need to show they can play a more consistent 90 minutes if they hope to win.

After a poor season, Barcelona hope to redeem themselves by bring home Europe’s most prestigious trophy. Napoli were always going to be a difficult test with the quality players throughout their team. But, after the 1–1 draw in the first leg back in February, Barça needed to come out victorious at the Camp Nou on Saturday if they wanted to progress into the Champions League quarter-finals.

In the first half, the home team was clinical in front of goal. They looked sharp after a disappointing La Liga campaign. However, the second period saw a completely different Barça emerge. It was like watching a training match with some poor passing, a lack of urgency and very little attacking threat. The Italian side dominated and intimidated more, and in the end, the locals needed a little luck to make sure they went through by two goals.

The first half of the Barcelona vs Napoli was a great game to watch, especially for cules. The Spanish giants came out looking to play football and, most importantly, took their chances in front of goal. Clément Lenglet, who has had another solid season, opened the scoring with a fantastic header from a corner. This seemed to give Barça some confidence as they grew into the game and played some clever football. Lionel Messi then had his say on the game, scoring an incredible solo effort by beating several defenders and finishing into the far corner after 23 minutes.

Unfortunately, the Argentine’s second goal was cruelly disallowed by VAR after it brushed his arm. Frenkie de Jong, who was a standout performer all game, had beautifully picked out Messi in the box and the number 10 controlled the pass before putting it in the roof of the net.

“The team played well and deserved the victory. They caused us problems, but we controlled the game in the first half”

Not long before the break, the hosts were awarded a penalty after Messi stole the ball from Koulibaly, who accidentally fouled Barça’s captain. Luis Suárez scored the penalty brilliantly after Leo looked unable to take it after a bad knock. A minute before half-time, Gil Azzurri were given a lifeline when Iván Rakitić gave away a penalty on Dries Mertens. This did unsettle fans as Napoli now had a crucial away goal.

“Napoli are one of the best Italian teams. We knew how to deal with them in the first half”

Overall, the first half showed a lot of promise with the home team performing well. Messi looked well rested and was a constant threat. In midfield, Frenkie controlled the game and seemed to be everywhere on the pitch. Both Nélson Semedo and Lenglet also put in strong performances. Nonetheless, VAR had a questionable evening. In the first half alone, it took over seven minutes to decide just two decisions – Messi’s disallowed goal and the penalty on him. It slowed the game down too much.

With a 3–1 lead at the break, Barcelona should have been able to go on and control the game against Napoli. Instead, a slow and lethargic team reappeared, something all too familiar this season. At times, the team struggled to retain the ball for extended periods. A lack of control from the midfield and support in attack were two of the main issues. An isolated duo of Messi and Suárez could be seen for most of the second period. There was a lack of urgency and tempo in the azulgranas. They should have continued to grow into the match and put on a show, but this was not the case.

Napoli performed well and were unlucky not to score more goals on the night. It highlighted that Barcelona can play well for periods of the game but are unable to maintain it for the full 90 minutes. After half-time, the Catalans looked short of ideas and understanding of the instructions that had been given to them. There are big questions again over the manager’s choice of substitutions, or lack of.

Barça clearly needed fresh legs in both midfield and attack, but none came until Barça B midfielder Monchu was introduced after 84 minutes for his debut. Moreover, Quique Seitén only used two out of a possible five substitutions even though the players were clearly struggling to control the game. In the end, the blaugranas managed to qualify for the next round convincingly enough. Notwithstanding, they will need to raise their level by Friday 14th August when they face one of the favourites, Bayern Munich.

The Barcelona vs Napoli clearly was a game of two halves. In the first 45 minutes, the home side was dominant, clinical, driven and energetic. They showed a vast improvement to some of the previous La Liga fixtures and the players looked rested. The second half, though, was a complete turnaround with the performance levels dropping for a few players.

Fatigue obviously set in midway through the second half and this is when substitutions were desperately needed, but never happened. The first period showed a lot of promise and gave hope to culés. On the other hand, the second half left a lot to be desired as the team struggled into the next round of the Champions League. Bayern will be favourites in the tie, but there is still a chance for the Spanish side if they can come closer to what was seen in the first rather than the second half against Napoli.